Or, The Equal Opportunity Celebrant – Part 3 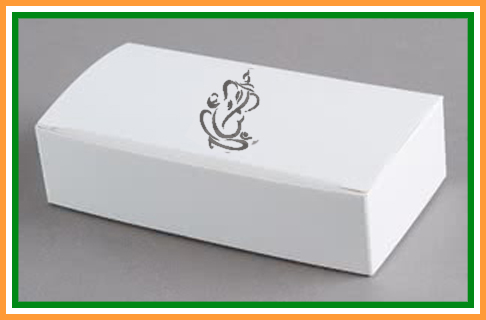 A long time ago in a land far, far away, before I had identified my obsession with world food, when I was merely a youthful gourmand content to consume tasty fare but still light years away from my current soaring orbit of ethnojunkie mania, an acquaintance from what I now know as Little India visited me.

Opening my souvenir, I was ambushed by a tempting, heady aroma that I’ll never forget – my first contact with mithai, Indian sweets. Peering within, I discerned a dozen or so colorful tidbits – yellow, orange, pink, green, cream, white, brown, some glistening with what appeared to be thin foil made of silver (and which I later learned actually was thin foil made of silver) and all in distinctive shapes from spheres, disks and cylinders to cubes and diamonds and even a pretzel configuration.

Selecting one, I took a bite. “Not bad,” I allowed, as I made my way from the living room into the kitchen to refrigerate the rest.

Curiously, about twenty minutes later, I found myself woolgathering about these new delicacies so I headed back to dispatch the one I had started earlier. “These are actually pretty good,” I thought as I polished off a second and began nibbling at a third. “Better save some for later,” I reasoned as I stowed the box back inside the fridge.

This time, only about ten minutes passed before I returned to my treasure; in retrospect I suppose I had been reflecting all the while about which one I’d sample next. Standing before the fridge, I devoured a fourth. “Pretty good? No, these are amazing!” I realized in the throes of a sugar-induced epiphany. Replacing the box with my right hand and holding a fifth goody with my left, I elbowed the door closed and attempted to leave the kitchen, but before I could escape, I was compelled to make a U-turn as if by some unseen, powerful force. Yanking the refrigerator door open, I grabbed the container and scurried to the living room. Anxiously, I attempted to rationalize my monomaniacal behavior: I hastily began scribbling detailed notes describing the flavors and textures I was experiencing with each sweet mithai – nuts like almonds, cashews, and pistachios, spices like saffron and cardamom, fruits like raisins and coconut, even carrot; some were redolent of rich dairy, some were thick and fudgy, some soft and syrupy sweet, some creamy, some crispy, some crumbly. But to me, every one was a tiny, delicious miracle unlike anything I had tasted before.

And the monkey on my back emphatically concurred.

That was it. I knew I had to get to Little India – and soon! – so that I could score another parcel and share these delights with my friends. Feverishly, I began making plans: it was imperative that I turn on everybody I knew to mithai. (And obviously, while I was at it, I could land more for myself!)

Perhaps it was this very incident that put the junkie in ethnojunkie.

And now, freely admitting that I am powerless over their sway, I must share my experience with you. If you’re reading this around Holi, the Hindu festival of spring and colors celebrated around March, or Diwali, the Hindu Festival of Lights occurring between mid-October and mid-November, it’s a particularly good time to launch you into this universe. (Holi recounts the heartwarming legend of Krishna coloring his face for Radha, his love, and heralds the arrival of spring; Diwali spiritually signifies the victory of light over darkness, good over evil, knowledge over ignorance, and hope over despair.) One of the rituals common to both holidays is the sharing of mithai, and although I can’t bring each of you to my favorite sweets dealers, I can tell you about some of the diverse types you’re likely to find and what to expect when you taste them. 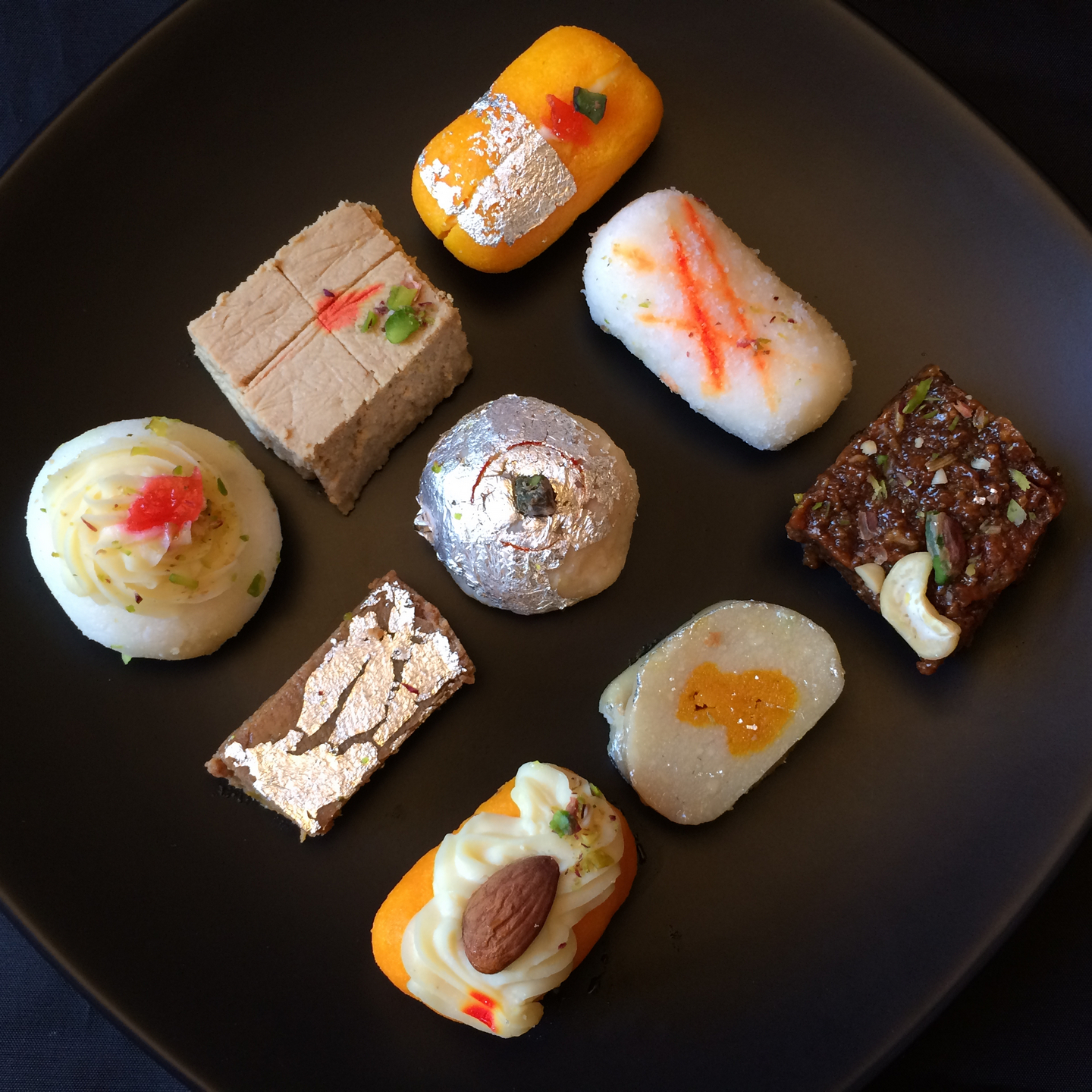 Varieties of mithai (मिठाई) are regional, from the north, east, south, and west of India, not to mention Bangladesh, Pakistan, and Sri Lanka. Many are pan-South Asian as well, but in New York, you’re not likely to see any distinctions other than Indian (most of the shops around Lexington Avenue near East 28th Street in Manhattan and those along 74th Street and 37th Avenue in Jackson Heights, Queens) plus a smattering of Bangladeshi spots (along 73rd Street in Jackson Heights). New Jersey also boasts a number of venues in Newark, Edison, and Paterson. My personal favorite as of this writing (and note that things can change in this regard) is Maharaja Sweets at 73-10 37th Avenue in Jackson Heights. 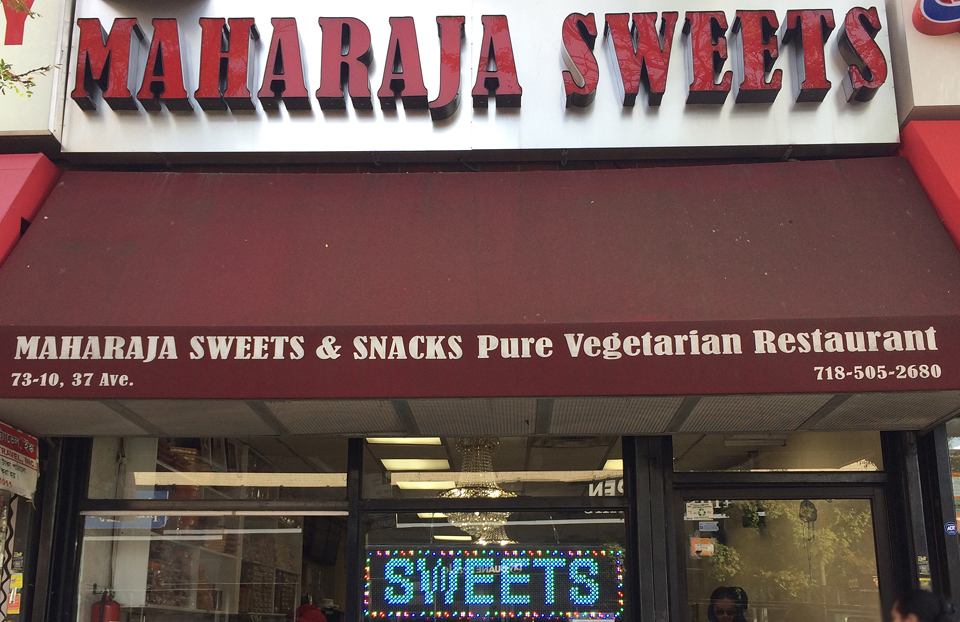 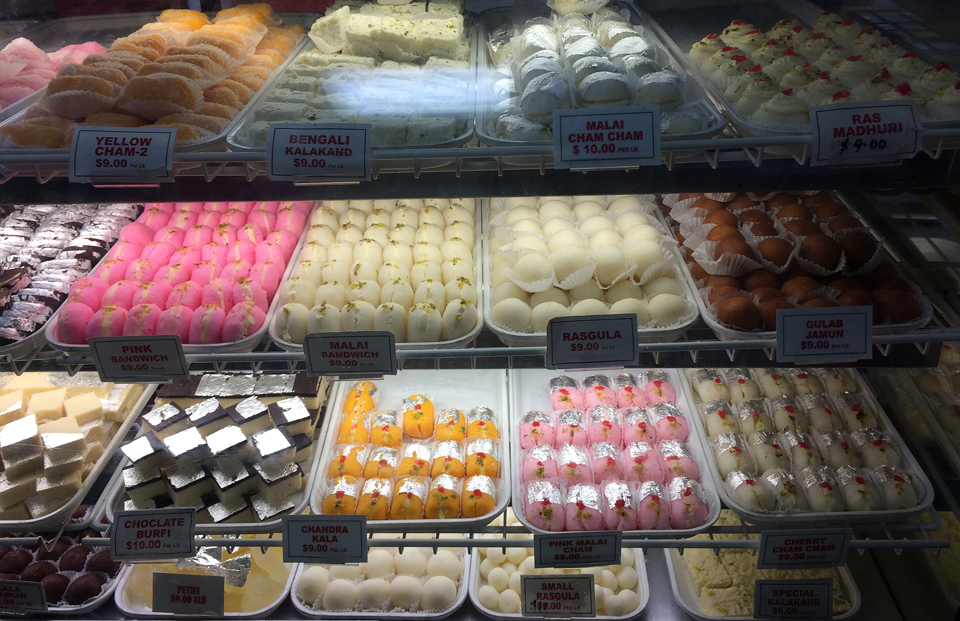 So in general, what do they taste like? You had to ask. I recall reading a story many years ago about how sweetmakers, obsessively dedicated to their craft, are revered in India and how they guard their secrets more closely than they would the Hope Diamond if given the chance, so for any particular type of mithai, recipes will vary widely from one purveyor to the next. The less involved ones might taste like nut-suffused, aromatic dairy fudge or like cheesecake taken to the next level or perhaps like a syrupy, fragrant cake – all with an overarching Indian luster. But there are so many versions of even these, not to mention the more elaborate multi-ingredient confections, that they defy verbal description. To paraphrase Supreme Court Justice Potter Stewart, you’ll know it when you taste it.

If you took note of the ingredients, textures, and shapes enumerated above and if you’re a math jock, you’ll see that the permutations and combinations within even that short list seem endless. What mithai have in common is that they range from very sweet to outrageously sweet and are all the size of a couple of bites. In this post, I’ll introduce you primarily to hand-held treats and reserve other sweets such as frozen desserts (like kulfi, Indian ice cream), puddings (like kheer, firni, mishti doi, and shrikhand), and drinks (like lassi) for another post.

First, a little vocabulary of ingredients that I promise will come in handy and is sure to obviate numerous pairs of parentheses; English spellings will vary slightly:

Chhena – A fresh (unaged) cheese like paneer (you’ve probably had paneer in Indian restaurants) but softer because some whey remains in the finished product.

Khoa, also known as khoya, mawa, and mava. Khoa is amazing: start with a cowful of milk and cook it down until you’re left with a few ounces of milk solids. If you don’t have a cow (and I suggest you don’t), you can buy it prepackaged at Indian markets if you’re considering making your own mithai, which, by the way, is not impossible.

Here are some of the most common types of mithai that you’ll typically encounter, but an exhaustive list would be, well, exhausting. (Click any photo to view in glorious high resolution.) 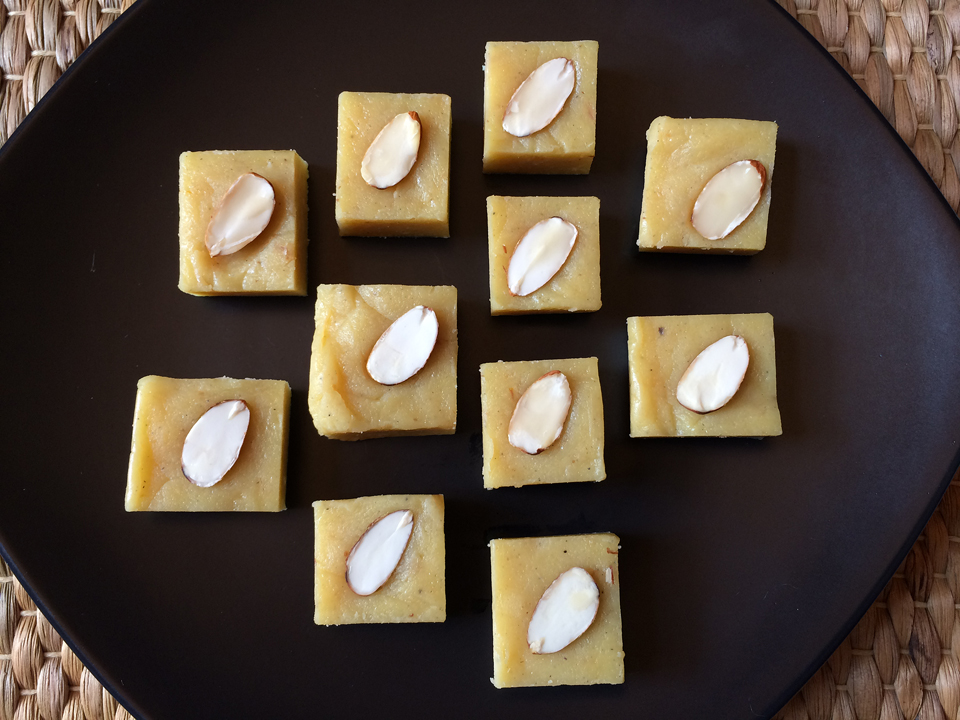 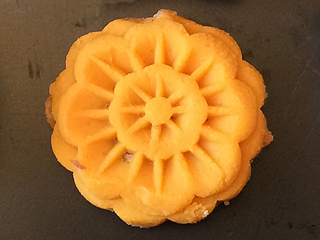 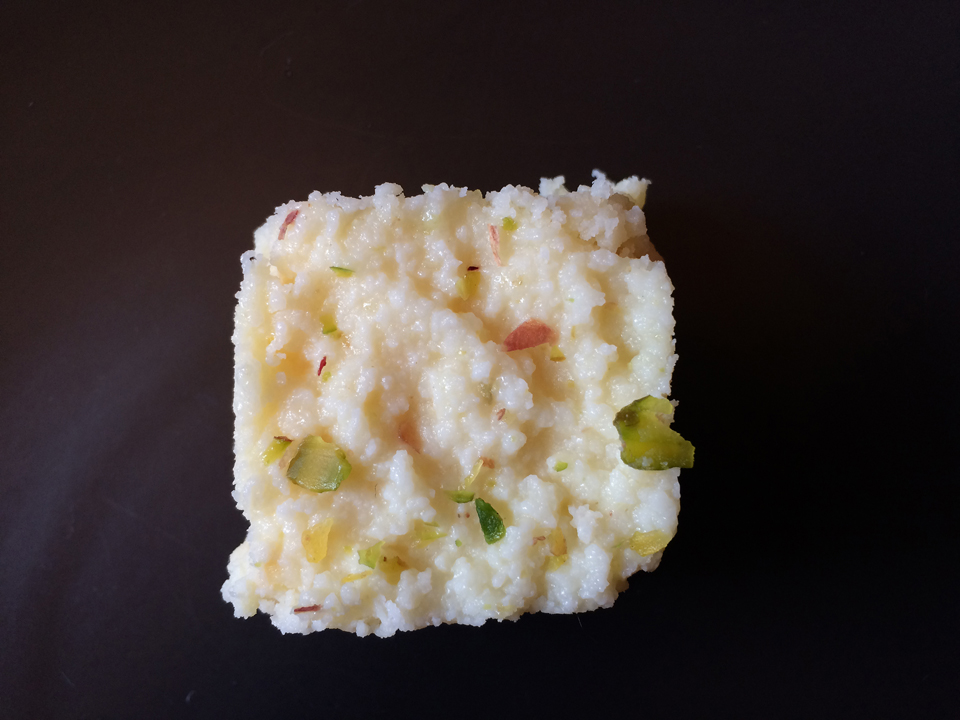 Shown here, kesar badam burfi (these are homemade by the way, so you see it is possible!), peda, and sandesh. 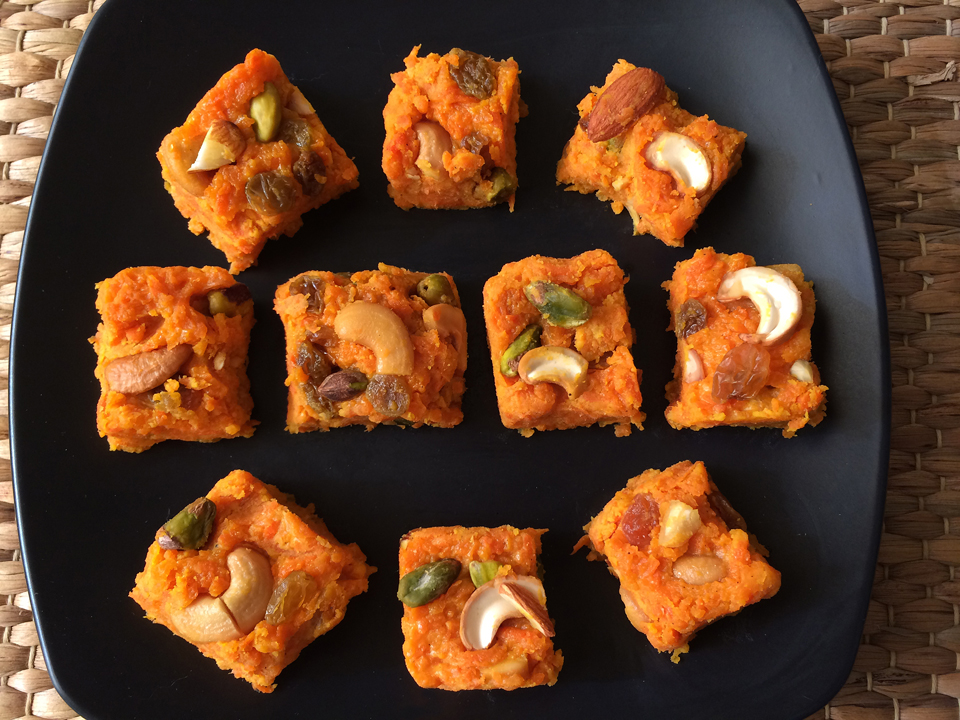 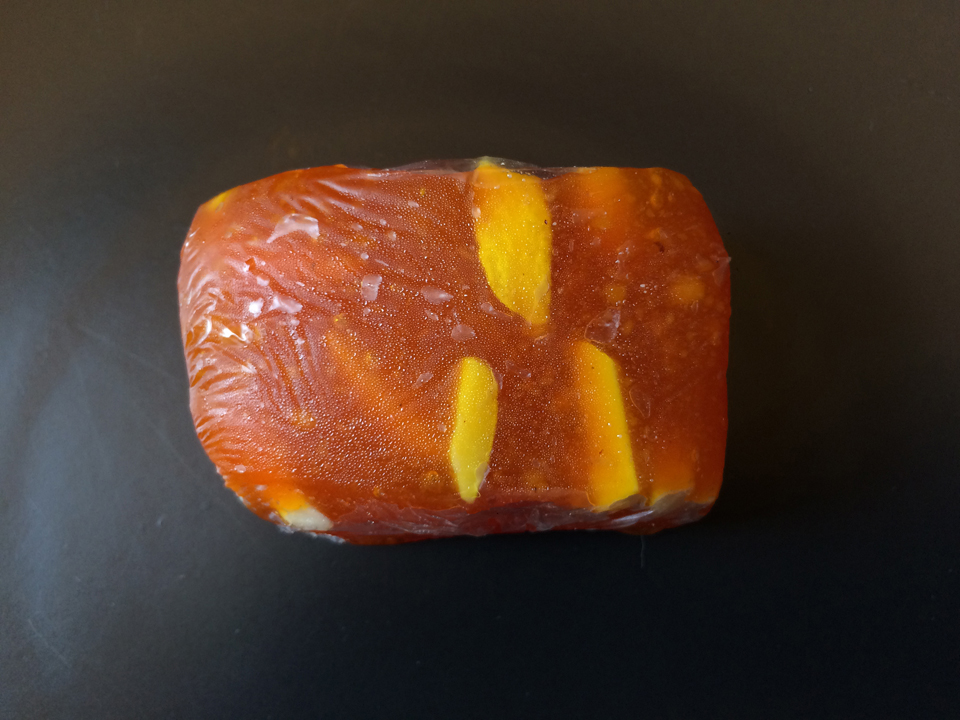 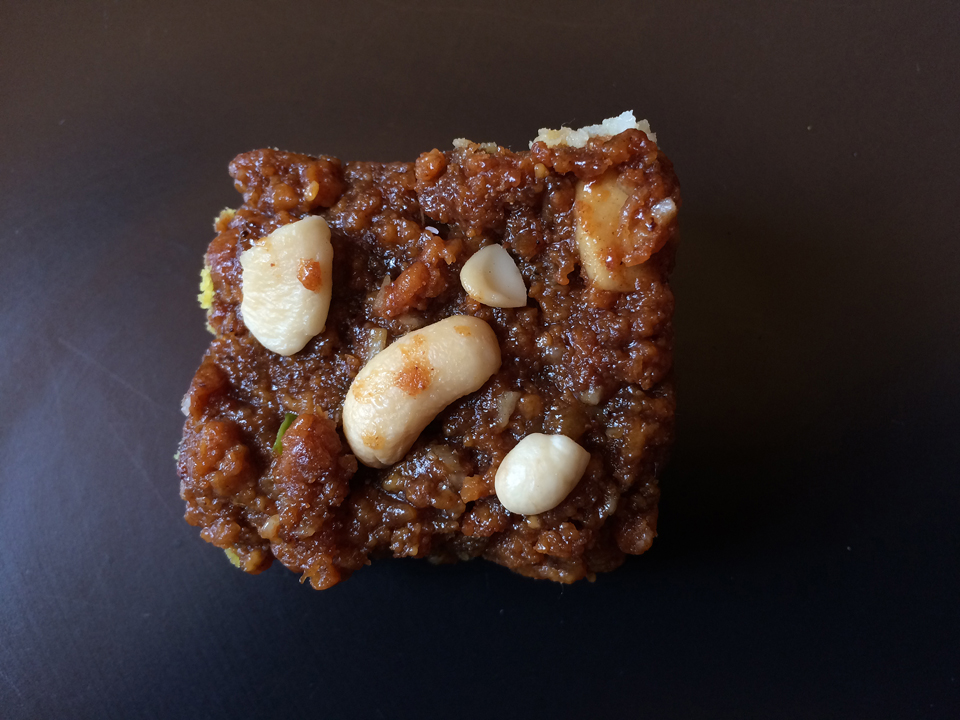 Halwa takes many forms depending upon the region of India from which it hails. From left to right:

Other halwas are made from wheat flour or mung bean flour. The flavors and textures really depend on the versions you come across, so I won’t attempt to provide a universal description, but they generally lie somewhere along the cake/fudge/pudding continuum.

Incidentally, many Indian sweetmakers are using chocolate these days with mixed results in my opinion: in most cases, it just doesn’t work (a terroir thing perhaps?) but every once in a while I’ve hit upon an excellent one and I’ve had to revise my thinking for the moment. 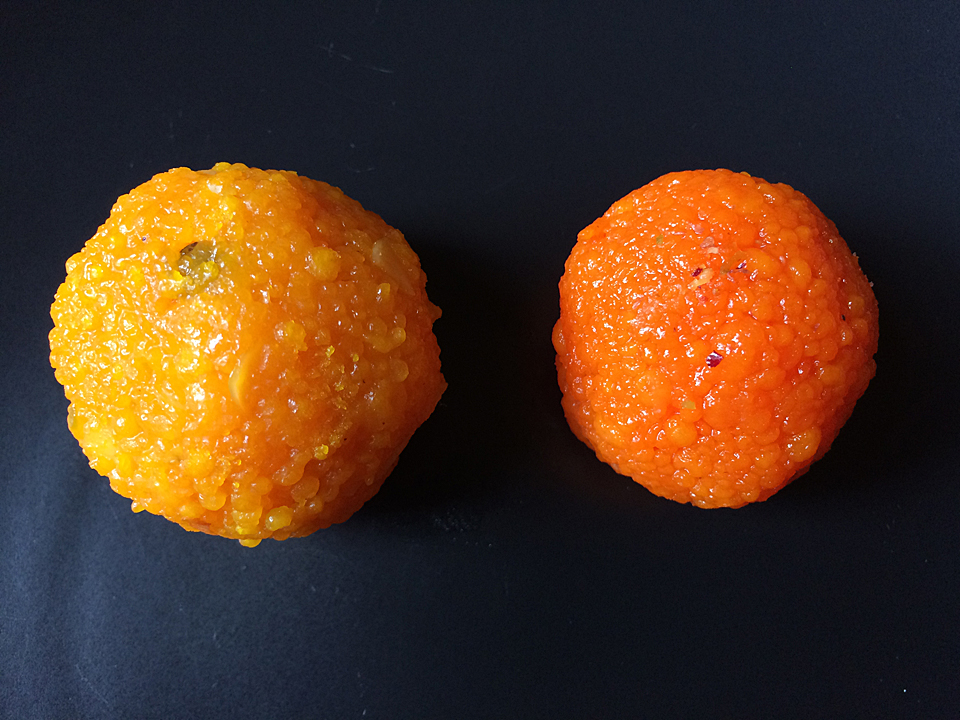 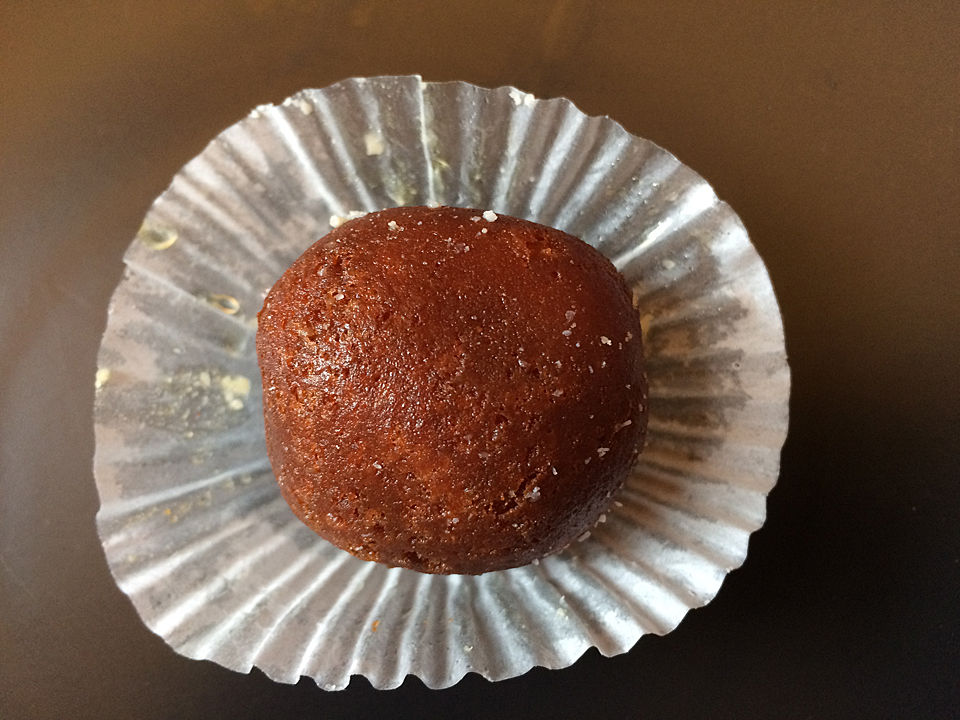 Laddoo and kala jamun. The yellow is shahi (royal) laddoo, the orange is kesar laddoo.

I think of these next three as related: 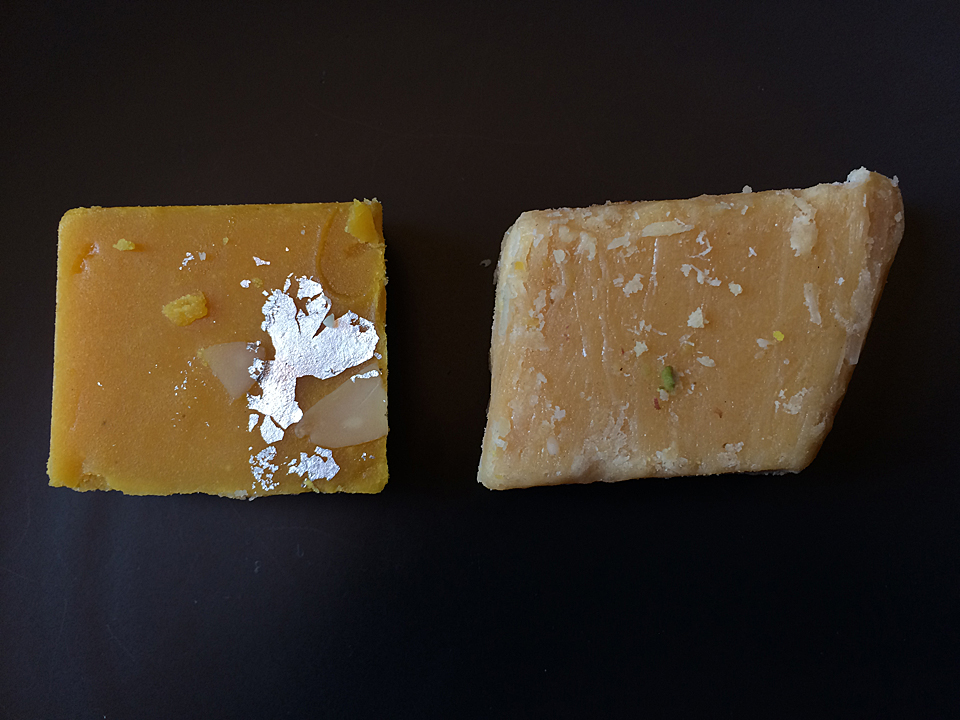 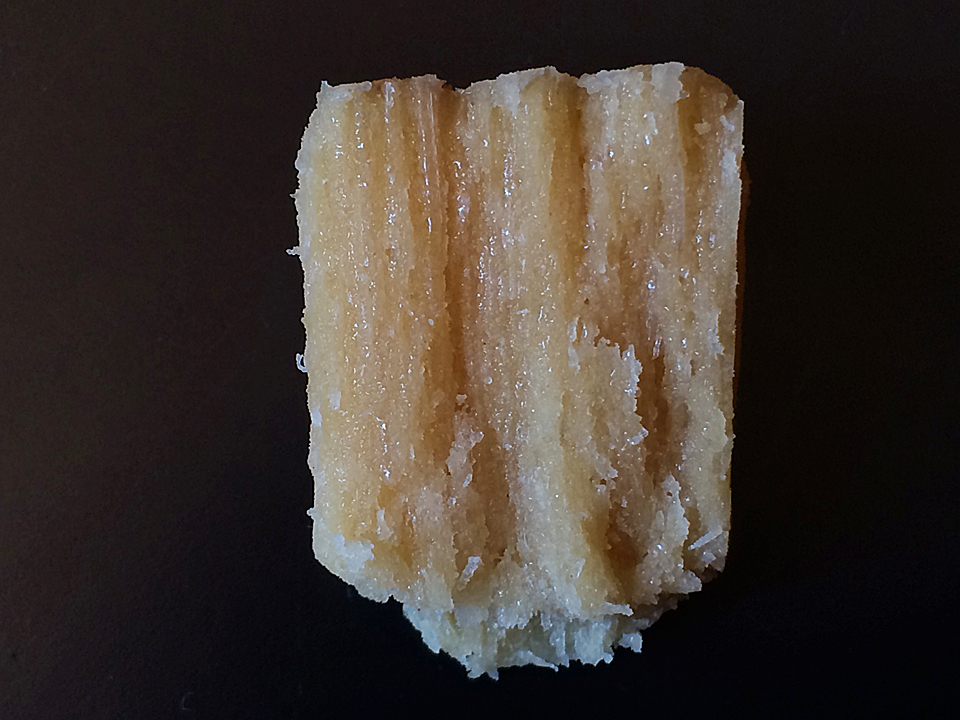 Besan in its many forms figures into so many mithai that I can’t keep track. On the left, smooth and creamy besan burfi and crispy patisa halwa. The photo on the right is a close-up of the layers of almost crystalline flaky striations that create patisa’s delightful crunch. 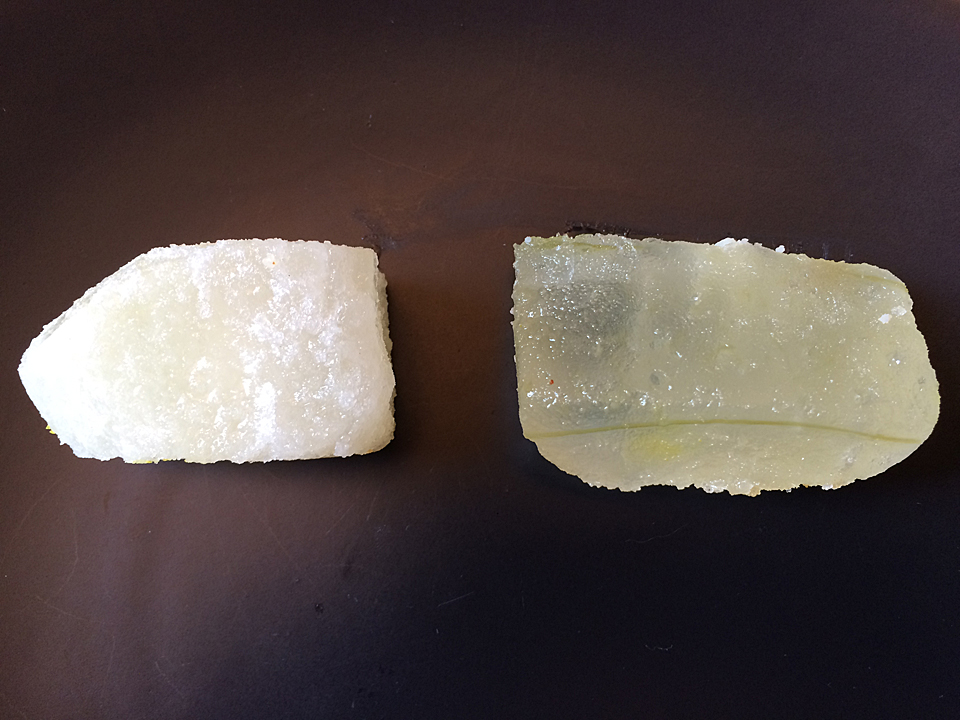 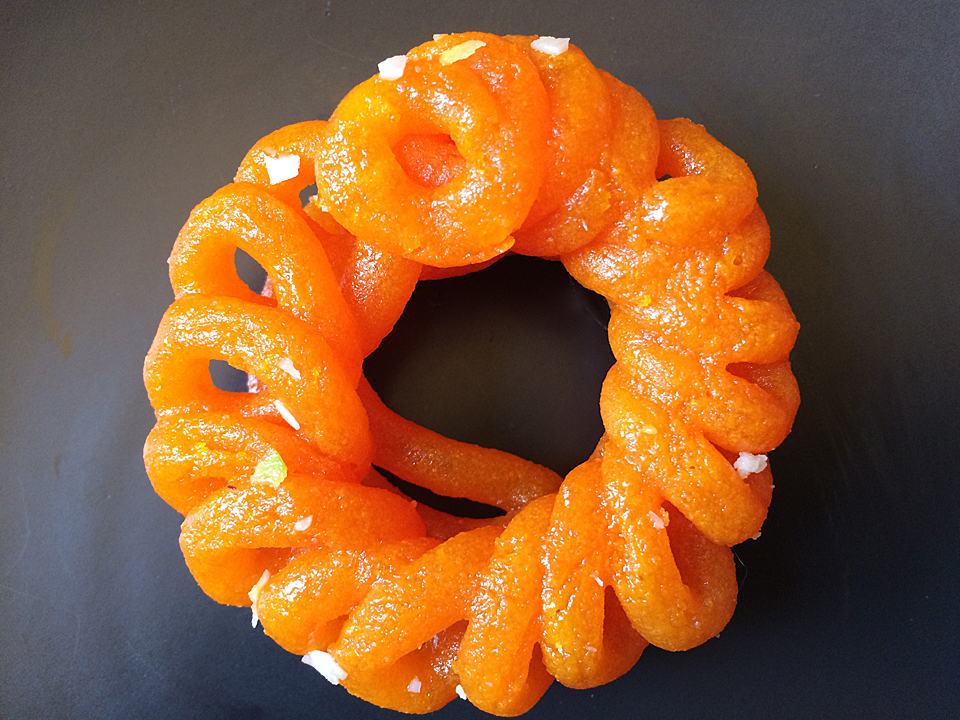 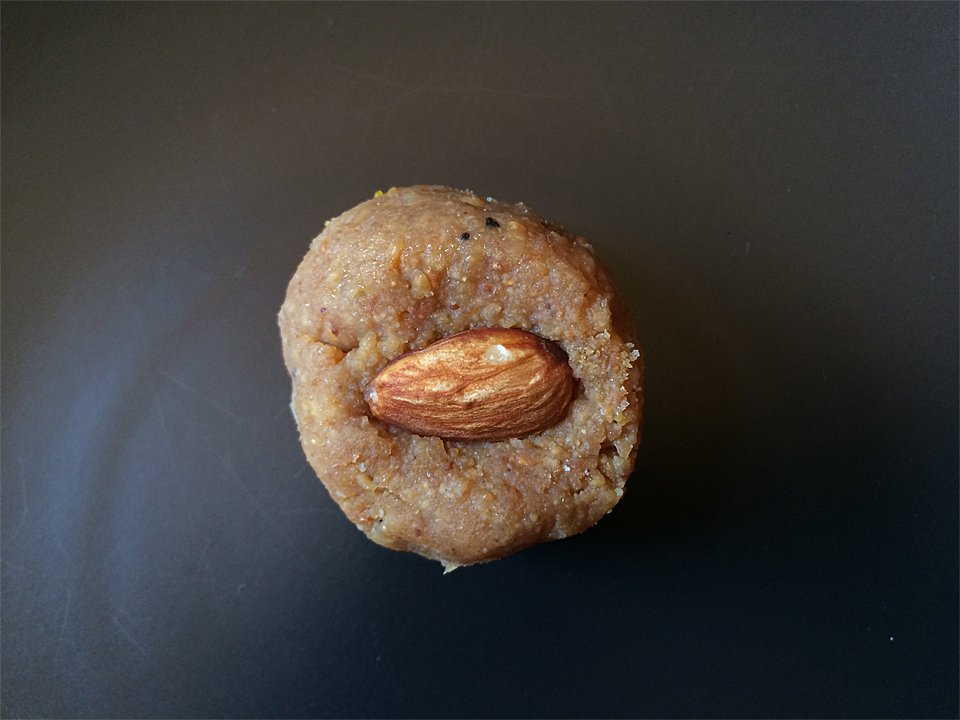 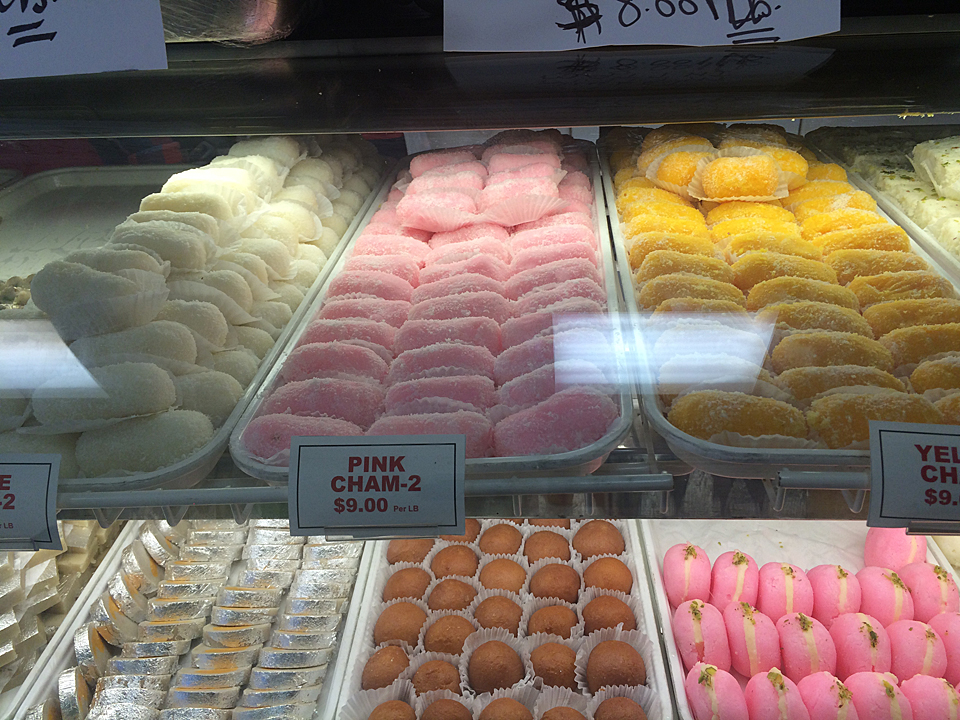 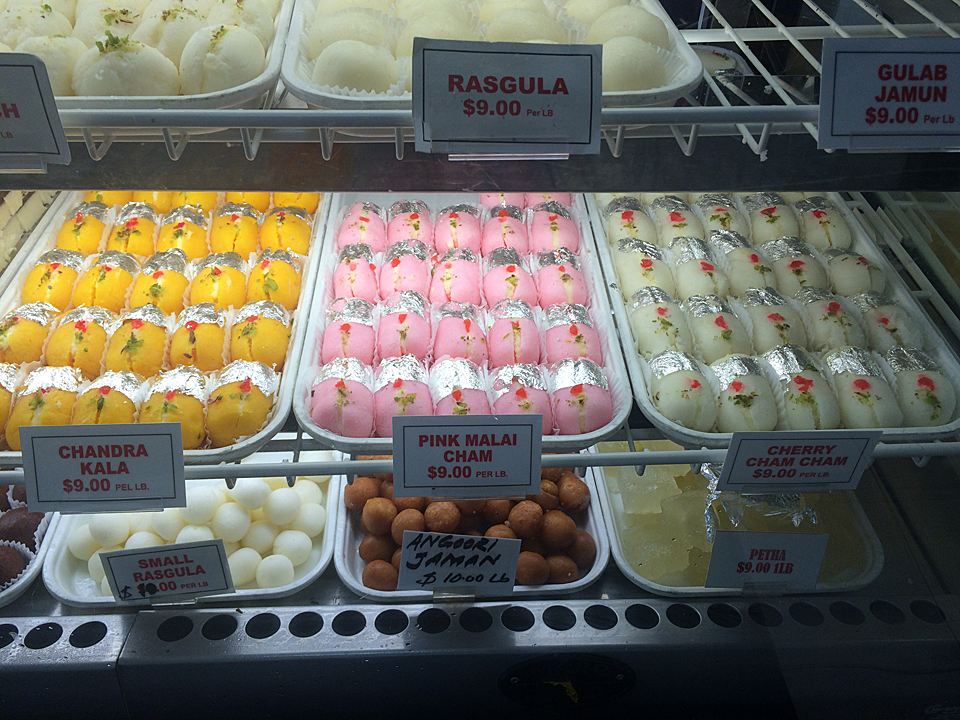 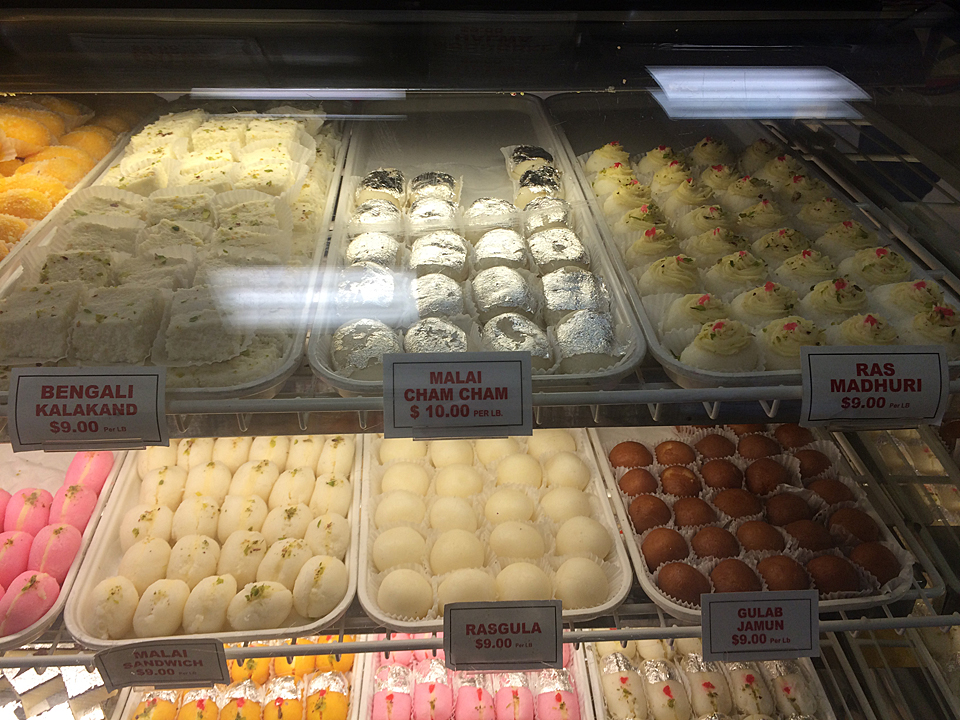 Cham cham in their native habitat (alongside other goodies). 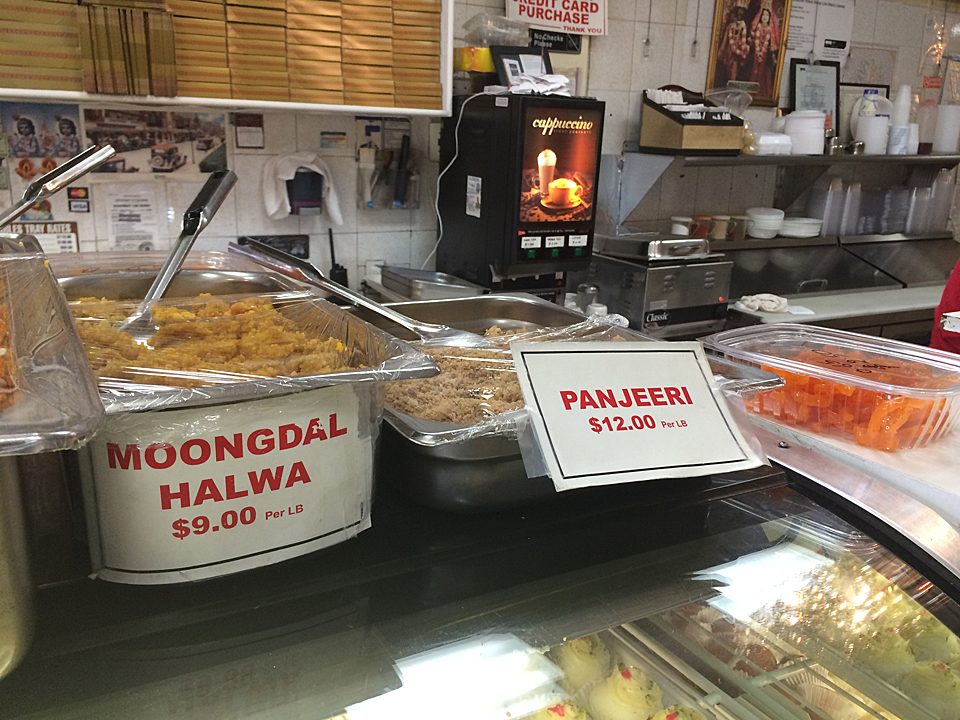 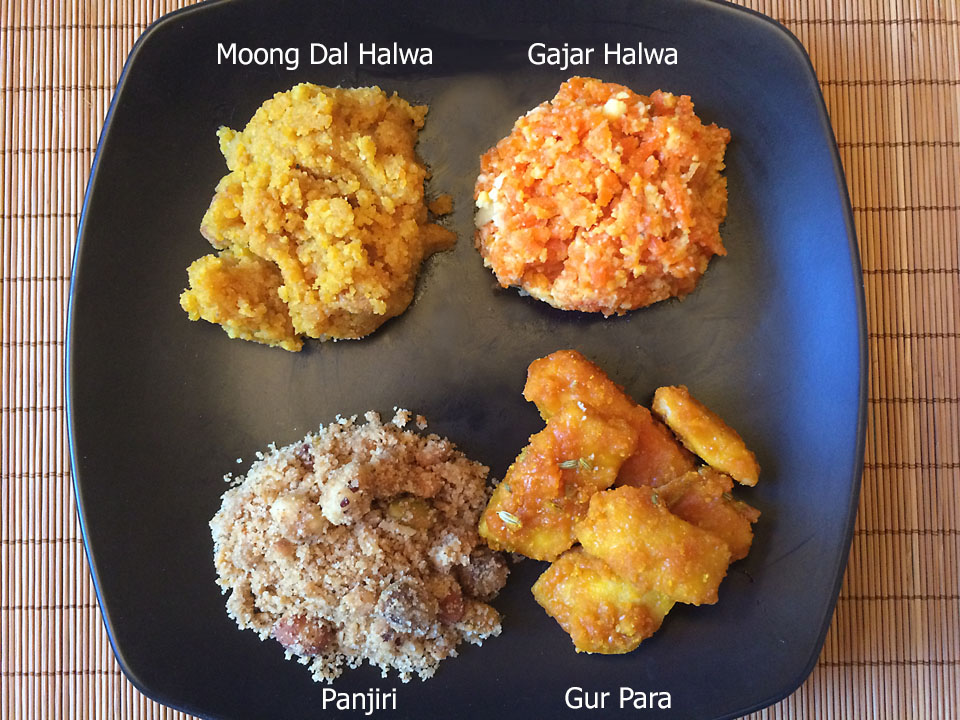 Some mithai like these are scooped out in bulk from bins rather than sold in compact individual pieces; some take the shape of small tidbits.

Mithai from Bangladesh and Pakistan share some similarities with their Indian counterparts but are crafted from a slightly different set of ingredients and, to my taste, are a little less sweet. I recommend becoming familiar with Indian mithai before essaying these. The photo on the left shows a few treats from Premium Sweets, the Bangladeshi restaurant on 73rd Street in Jackson Heights. On the right is a sampling of the panoply of Pakistani confections I discovered on a recent New Jersey expedition to celebrate Pakistani Independence Day (h/t Dave Cook and his illustrious blog, Eating In Translation) that came from Chowpatty on Oak Tree Road in Iselin; most were pretty good but perhaps a little less accessible than their Indian analogues. 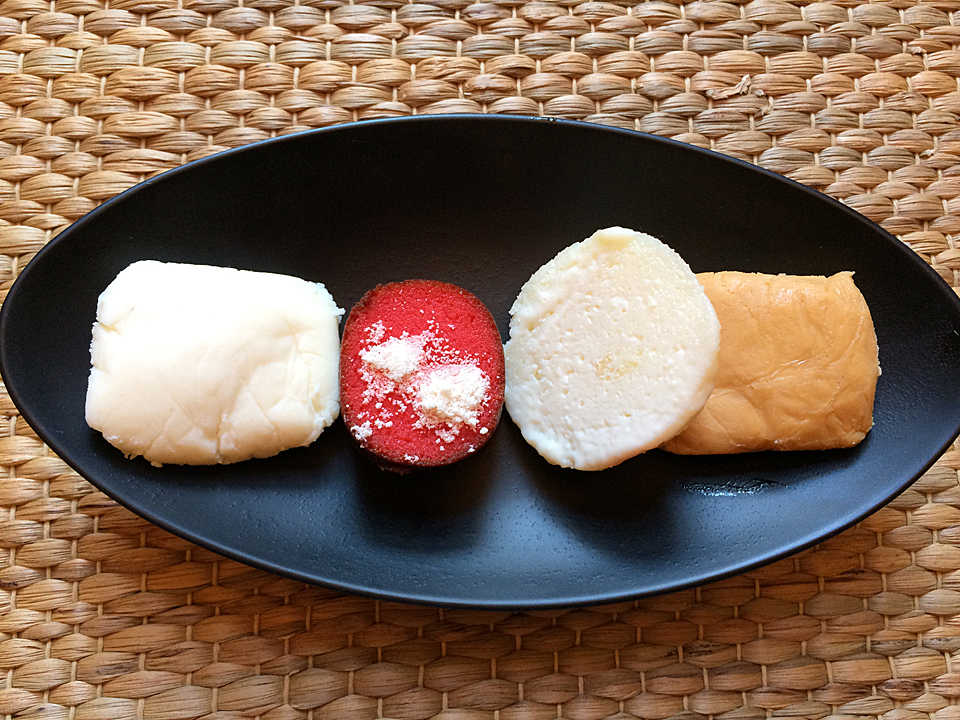 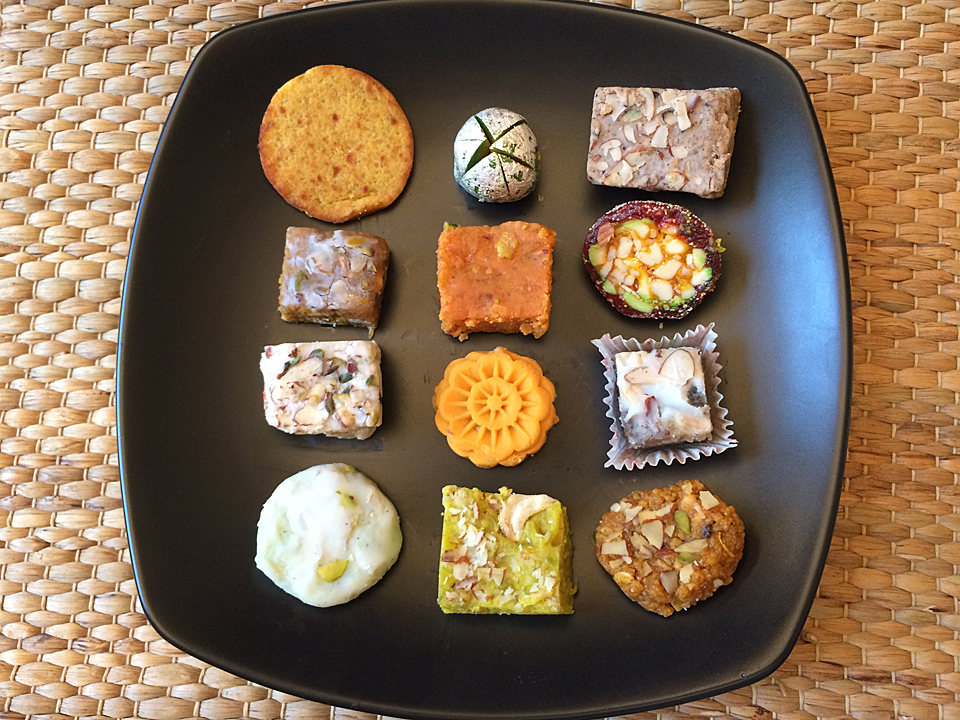 And finally, more photos to get you hooked. As you might expect, special mithai are created for Diwali. One that was particularly delicious, unique and one of my all-time favorites was apple mithai (the two peach-colored pieces in the first photo), complete with a clove for a stem. This seasonal sweet tasted a lot like marzipan and had a very limited run through Diwali only; it had been a specialty of Rajbhog Sweets in Jackson Heights, but alas that venue no longer exists. Rajbhog maintains other outlets and when I checked the website of the one on Newark Avenue in Jersey City, there was a photo of my beloved apple mithai on a platter with a plethora of other treats, but sadly the online order page did not offer them. Sounds like a compelling reason for me to head back to Jersey City. Pretty much everything else pictured here is always available. 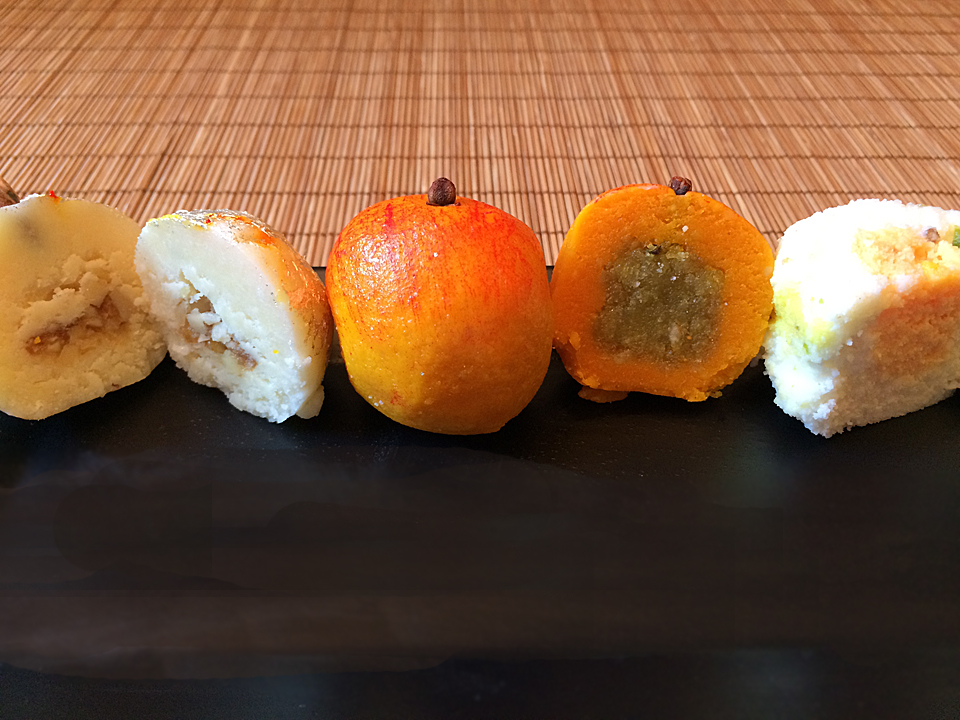 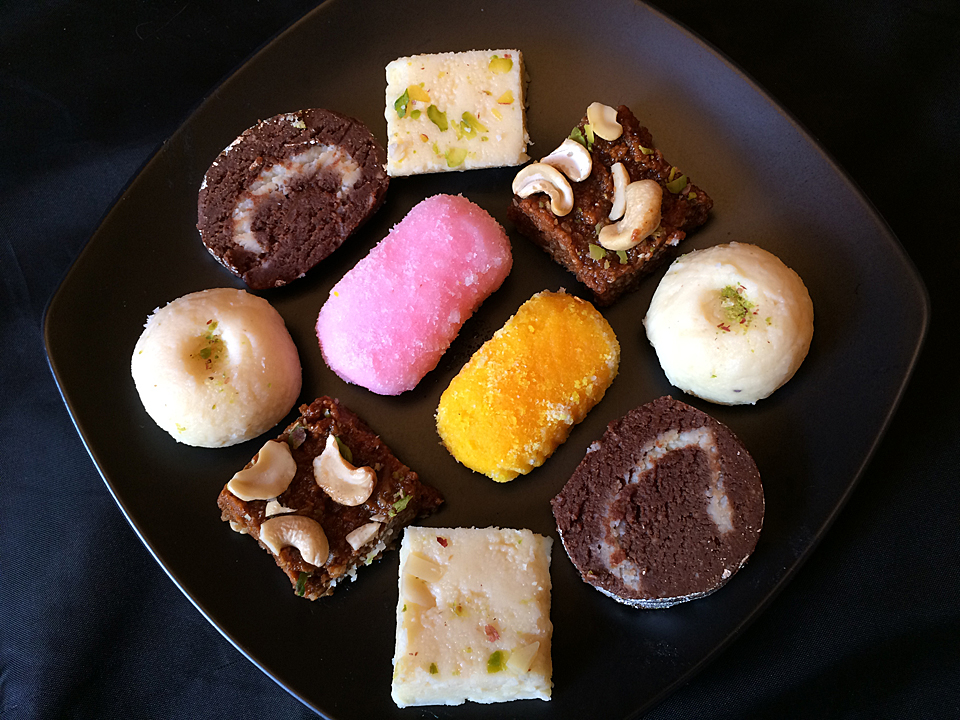 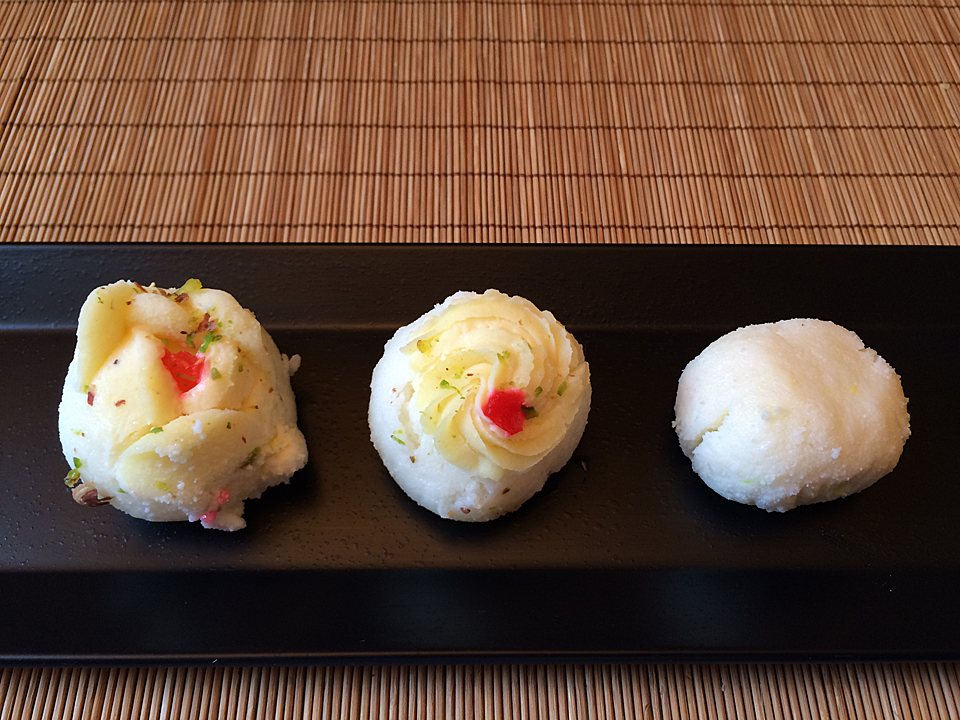 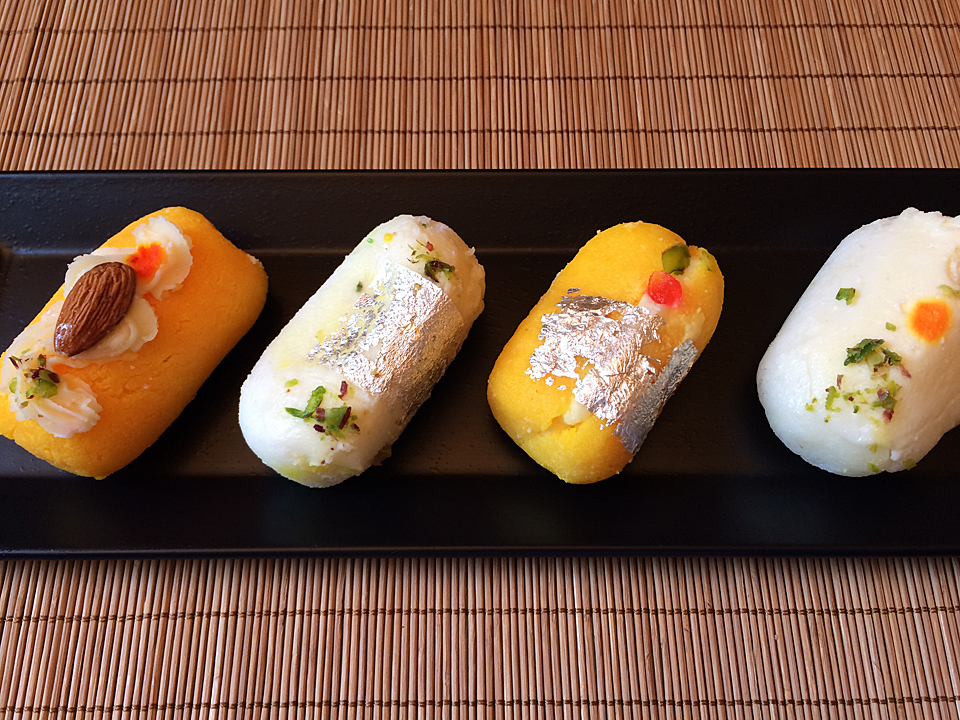 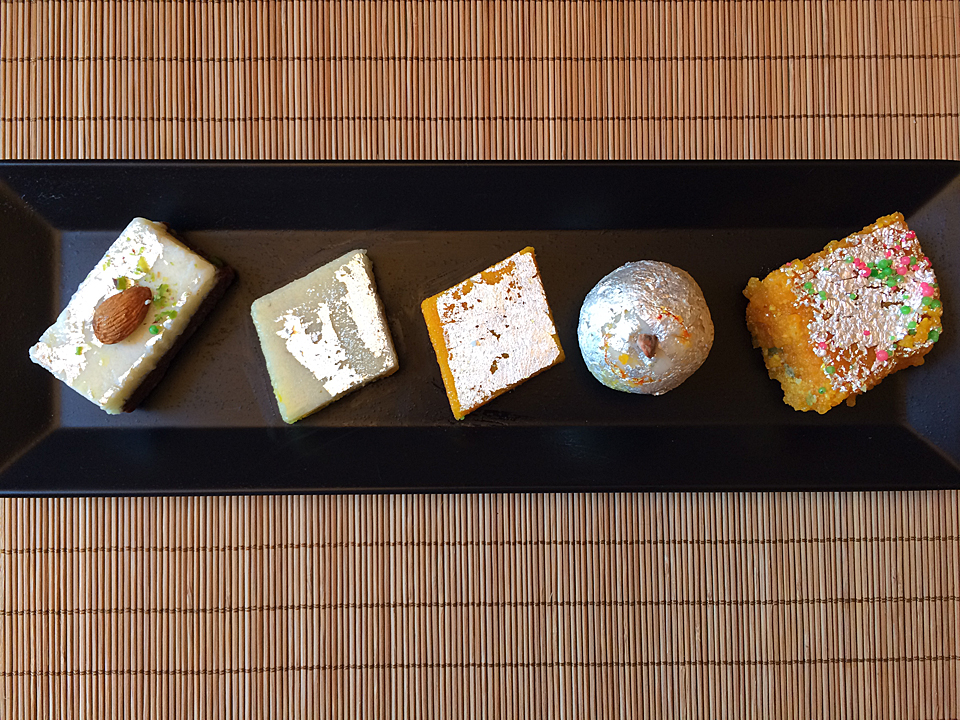 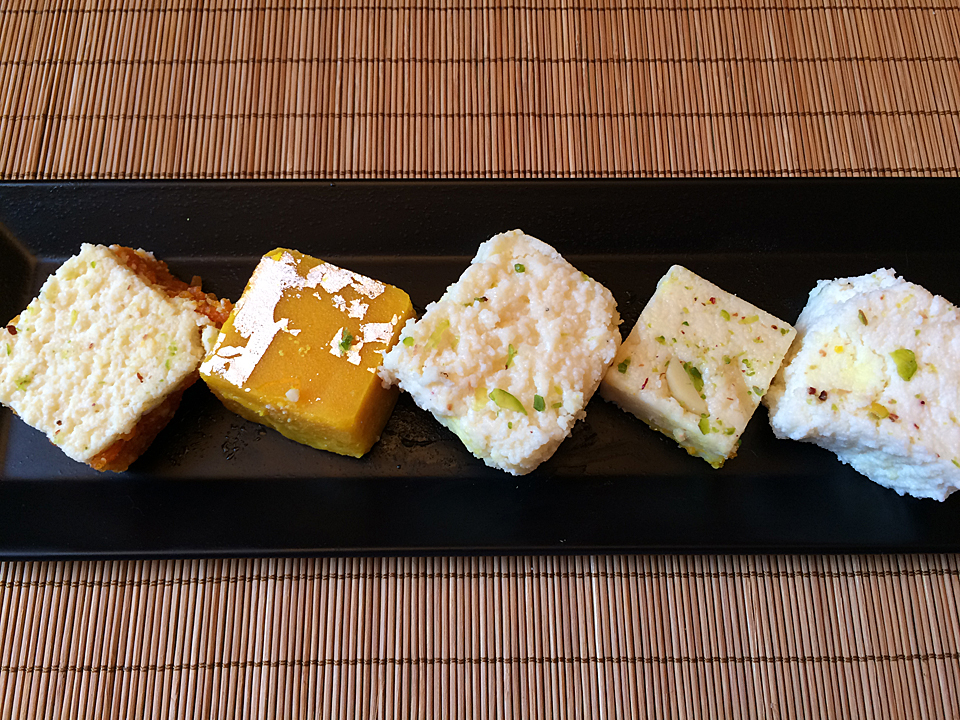 So that’s my addicted-to-mithai story and I’m sticking to it (and possibly to the Karachi halwa as well). I urge you to go out there and track down these confections, especially for the holidays although most are available year-round. If they don’t light your diya, I don’t know what will. And if, after you’ve sampled them, an insatiable craving for mithai sneaks up on you when you least expect it…well, you know how you got hooked!