Just got back from an ethnojunket to the Caribbean by way of Church Avenue in Brooklyn. Wandered into a shop that didn’t look all that promising from the outside, but was harboring some interesting produce within. I picked up a ripe custard apple. (D’ja ever fondle a ripe custard apple? They’re about as sturdy as a dandelion that has gone to seed.) The Jamaican owner rushed over to me afraid that I, being a middle-aged, balding, white dude, probably had no idea what I was feeling up and would no doubt damage beyond the point of salability in a matter of seconds.

“Be careful wit’ dat, mon!” he cautioned. Nearby, three Haitian women were staring at me as if I had three middle-aged, balding, white heads.

“It’s okay! I know these! They’re delicious. They’re my favorite fruit. Well, when I can’t get fresh jackfruit, that is.”

He looked at me out of the corner of one eye, certain that I was trying to pull the wool over it. “You know dis? What do you call dis?” he demanded.

“Well, I’ve always called it a custard apple. Do you have a different name for it?”

His face brightened, illuminated by a huge toothy grin. We had bonded.

But I still had one more task to complete. “Look at all this great stuff!” I beamed, casting a sidelong glance at the stern triumvirate of Haitian judges. Pointing at the unmarked veggies, I identified them one by one. “That breadfruit looks really good. Oh, and they’ve got sorrel!” And on and on. By then, the leader of the pack had softened to the point of being a fair match for the custard apple.

“We call that different in Haiti,” she smiled, pointing at the fruit.

“Tell me, tell me!” I dug deeply into my pocket and whipped out my trusty, pocket-sized, spiral-bound notebook. She mumbled something I could not decipher, having never been exposed to the word. “Will you spell that for me?” I asked eagerly.

She tried but was obviously struggling with the names of the letters in English. “Uh, kah, no, kay, um…”

“Kachiman?” I essayed, honking the last syllable through my nez.

“Exactly!” she replied in perfect English.

They then introduced me to a greenish fruit I’d never seen called a golden apple. (Love how when there’s no English word for a fruit they grab the nearest appropriate adjective and append “apple” even though they’re of a different genus. In Chinatown, they peddle something that looks like a small, pink pear made of wax. Tastes like it too. They call it a rose apple. But I digress.) Needless to say, all this was followed by delightfully convivial conversation.

The owner gently lowered my custard apples into their own individual bag with such care you’d think they were Fabergé eggs, and showed me how to carry it so they wouldn’t knock together.

I’ll go back sometime just to say bonjou to the gang. 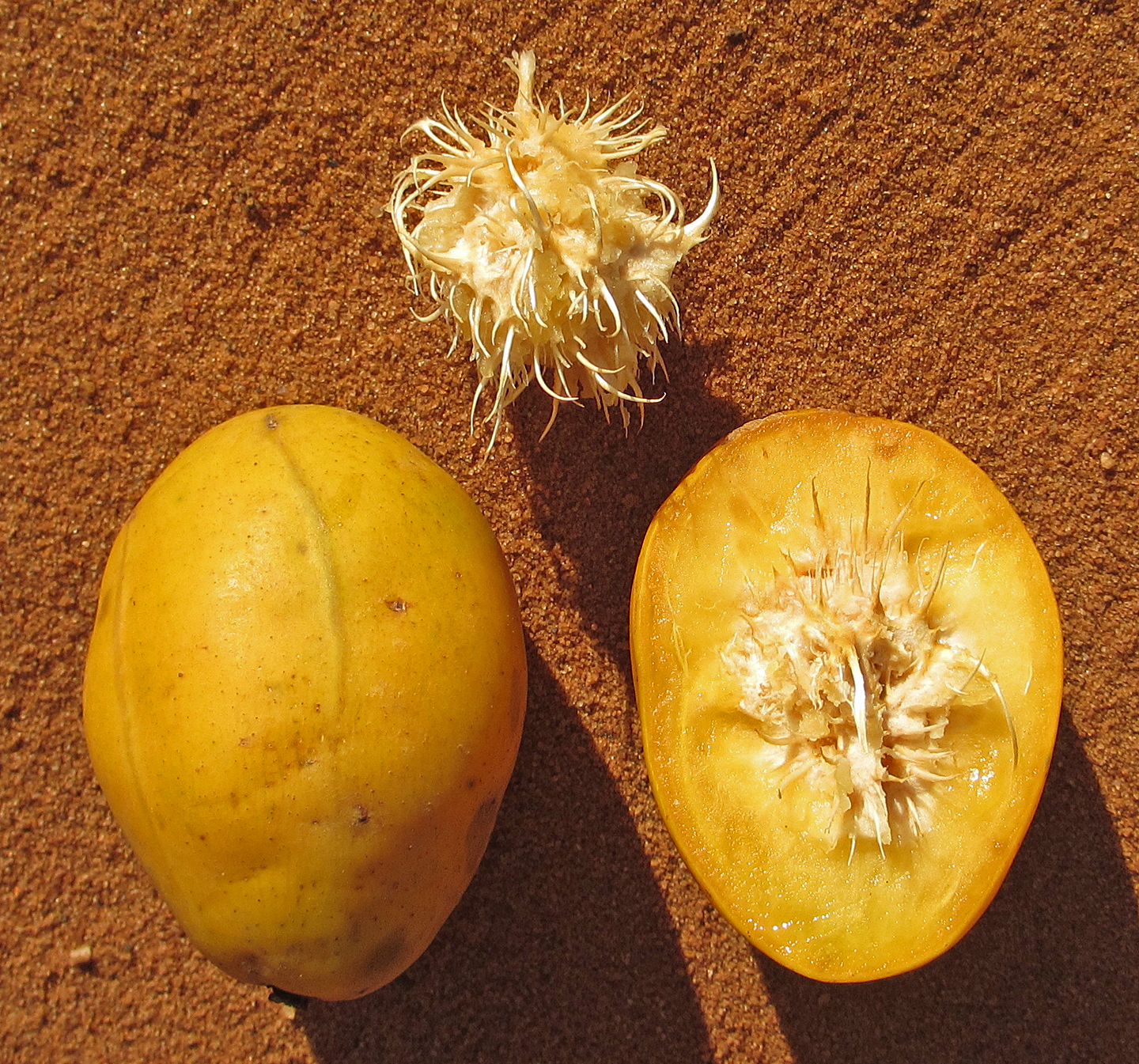 I found over 50 vernacular names for the golden apple and no, I won’t list them all here, however I’ve often seen it referred to as ambarella. Its sweet flavor is said to be a combination of pineapple and mango, but “tropical” is a blanket catchword that would be suitable. The pit has been described as fibrous, although if you ask me, lethal would be more appropriate; approach with caution! (Shown above, whole, half, and dangerous!)

One time, while stocking up in a Sri Lankan market on Staten Island, I couldn’t decide between ambarella chutney and ambarella jam. The proprietor was studying me, a jar in each hand, weighing my decision. Ultimately, I selected the chutney and brought it to the front of the shop.

From behind the counter he questioned, “You don’t want the jam?” I said that the chutney would hold me until my next visit to which he replied, “But how will you eat bread?”

I love what I do.