It was my pleasure and privilege to write this piece for Edible Queens Magazine. 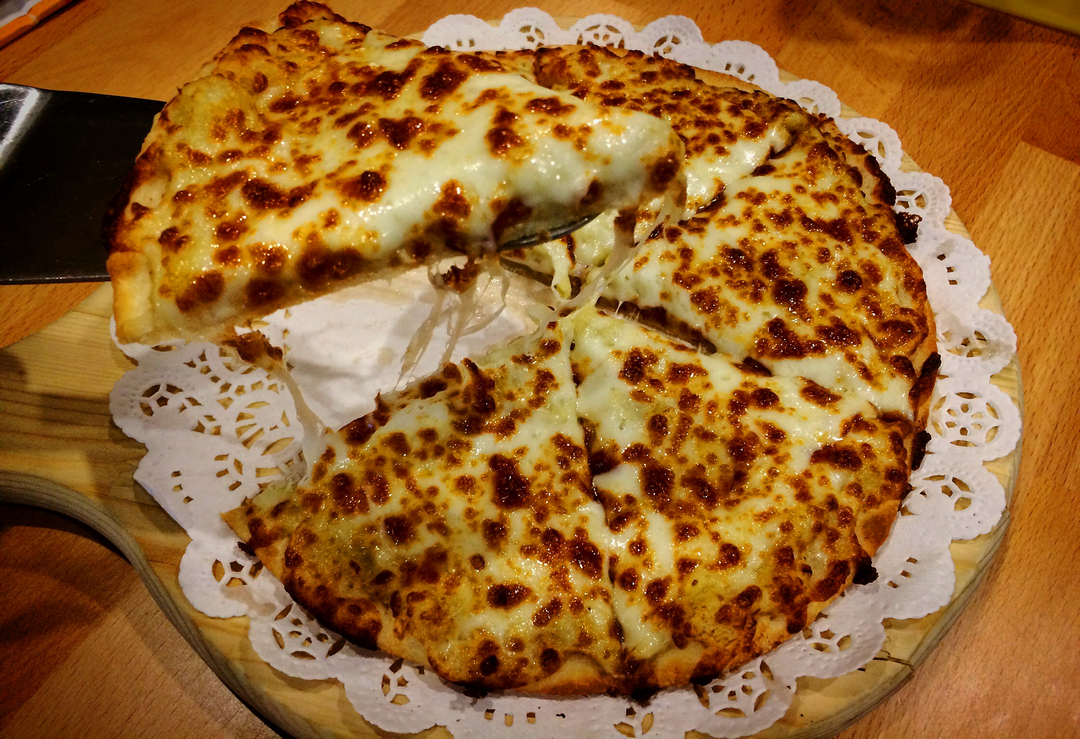 Whatever you may have heard about this fruit, it probably wasn’t encouraging. Some regard durian with mild amusement, some with outright disdain, while others have come to appreciate its unique personality. My objective is to disabuse you of any prejudices you may harbor about the “King of Fruits” (as it’s known in Southeast Asia) and direct you to a local restaurant where you can indulge—fearlessly—in its charms.

As to the aphorism: What, exactly, does hell smell like? It isn’t feasible to characterize sensory perceptions much beyond generalization—for example, other than sweet, what does a banana taste like? Any attempt to communicate the overpowering aroma of durian without getting uncomfortably graphic would be fruitless. Literally.

If ever you’ve run up against a colorful epithet for some sort of repellent stench, it’s probably been applied to durian at one time or another. Its odor is pungent and pervasive but it appears to defy meaningful description; part of that may be due to the fact there are numerous cultivars and each has its own individual scent that further varies with its degree of ripeness. It is for this reason that durian is forbidden in some hotels and airports and on many forms of public transportation in Southeast Asia, where signage cautions aspiring felons against even considering a violation. In fairness, many people no longer find the scent of durian objectionable after a few encounters, and some find it rather agreeable.

But back to the second half of our Stygian/Elysian paradox, the part about heaven. Durian’s flavor is complex and delicious, not overly sweet, but definitely tropical, the texture so rich and creamy that I call durian the fruit that makes its own custard. I suspect that all cultures champion some domestic delicacy that on first blush is anathema to a newcomer, but once acclimated to it, will take its place among their personal inventory of special treats: think anchovies, bleu cheese, scotch, kimchi, stinky tofu, nattō, Vegemite and Marmite, and the list goes on. It’s logical to posit that if no one craved these foods, they simply wouldn’t be available, and durian is decidedly commonplace throughout Asia. In Indonesia, it is even reputed as an aphrodisiac.

Durian is deployed in countless forms of tasty edibles, mostly sweet but some savory as well; even the seeds, when properly prepared, figure into a number of Asian dishes. There are durian cakes, pastries, pancakes, drinks, candy, ice cream, mochi and even freeze-dried chips—and that brings me to the crux of this piece: Flushing’s C Fruit Life, 135-29 Roosevelt Ave, might just be holding the gateway drug for durian novitiates, durian pizza.

Pizza in its many guises is a crossover phenomenon itself—neither entirely Italian nor American—so introducing a Southeast Asian element is fair play. If one can top pizza with pineapple, why not durian?

Founded in Hong Kong in 1987, C Fruit Life is a chain of casual restaurants with over 800 venues worldwide that serve Hong Kong–style desserts and snacks, some more salubrious, some just fruity-sweet. The Flushing location opened about two years ago and it’s their durian pizza that engenders the most buzz. 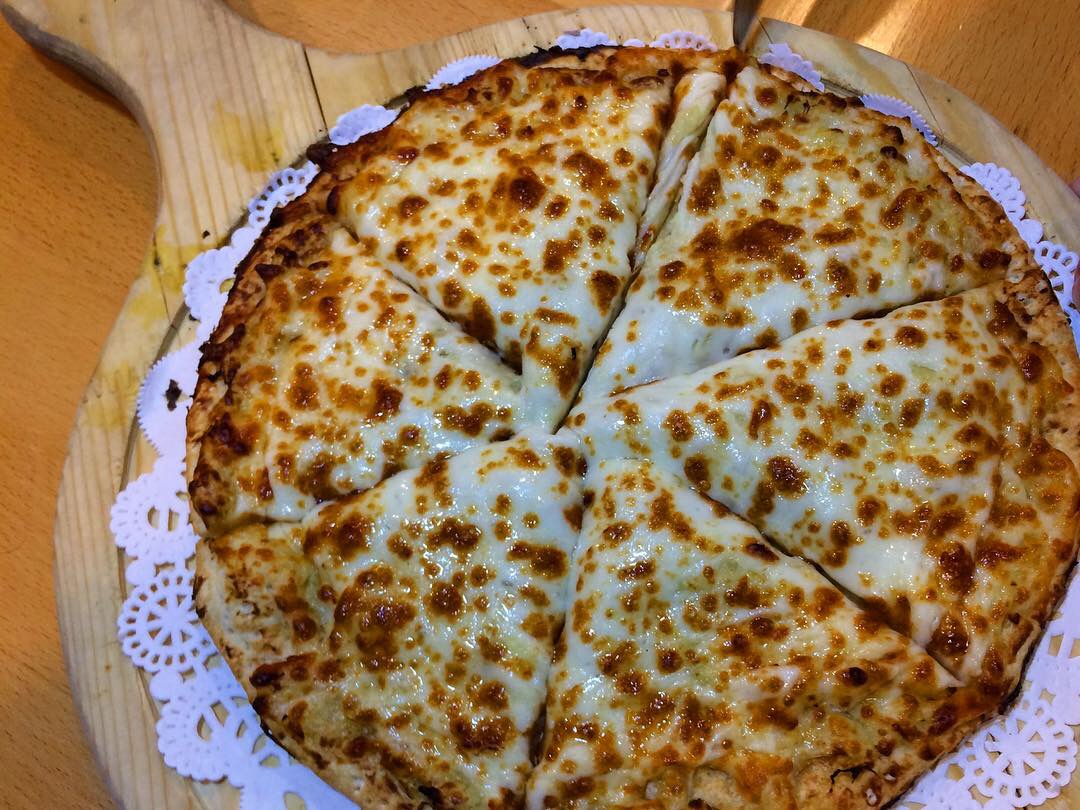 They offer two types of durian on their pizzas: the smaller, creamier, slightly sweeter and more popular Malaysian variety Musang King, and the less expensive Monthong, from Thailand. Each personal pizza is delivered to the table on a wooden paddle, its six small slices serving one or two people as a snack. While identical, the two versions differ in intensity, Musang King manifesting the more robust (and in my opinion, righteous) flavor. 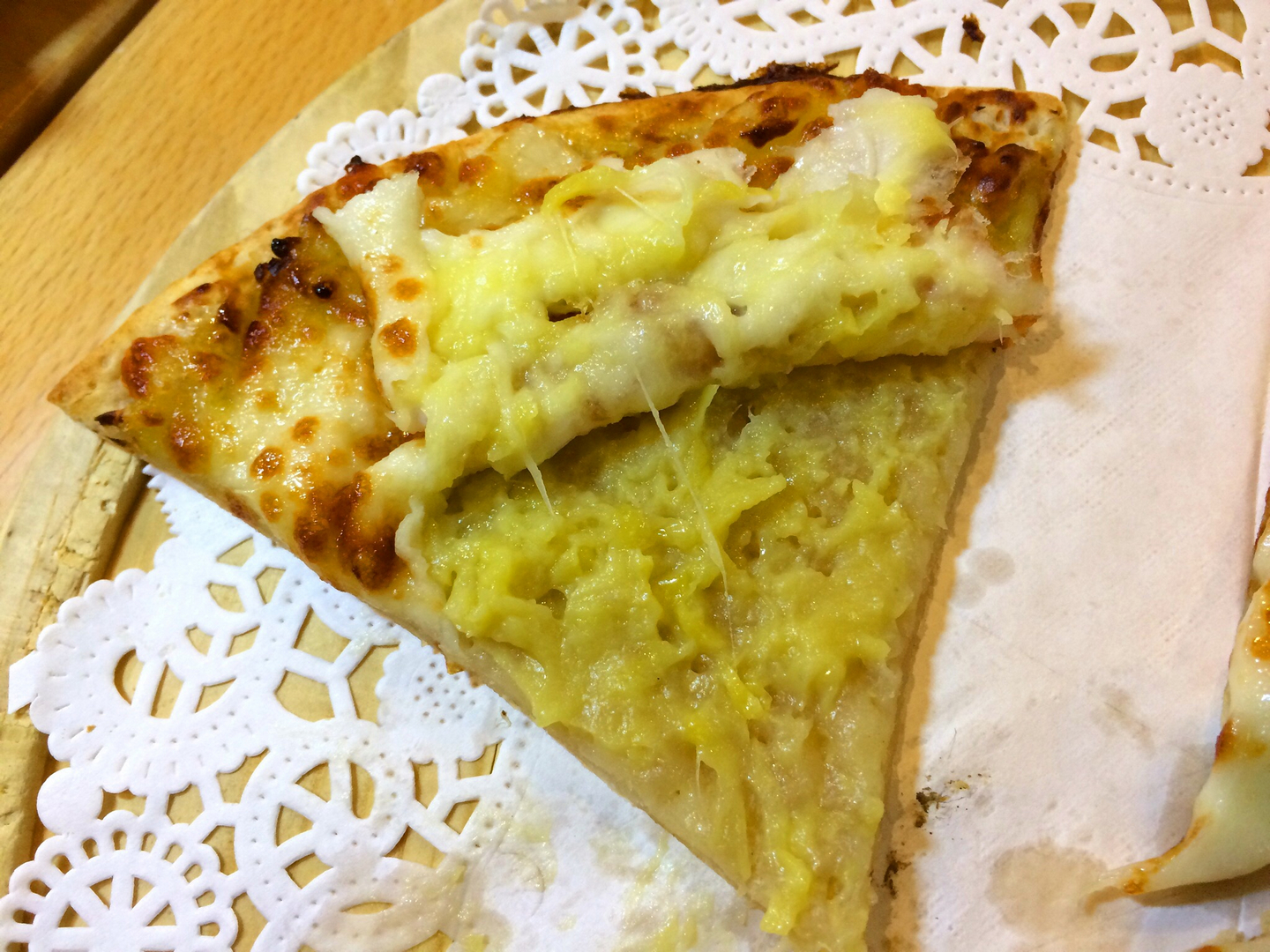 The thin, supple crust plays a supporting role to the layer of sweet, pale yellow, custardy durian purée topped with gooey mozzarella cheese. Peel back the cheese for a peek at the lusciousness that lies beneath. The Monthong rendition is a mite less potent, and is a bit saltier than the Musang King.

Do durian and pizza play well with each other? Most assuredly. I detected no daunting smell—as a matter of fact, the aroma is rather appetizing—only the inimitable ambrosial flavor. After all, it’s warm bread, delectable fruit and beautifully blistered melted cheese. What’s not to like? Both kinds are delicious: If you’re circumspect, you can always opt for the mild Monthong; if you’re bent on trying something closer to the real deal, do the Musang King—as they say, if you’re gonna dance, dance. Either way, don’t succumb to misplaced neophobia—head over to C Fruit Life and experience durian pizza for yourself! 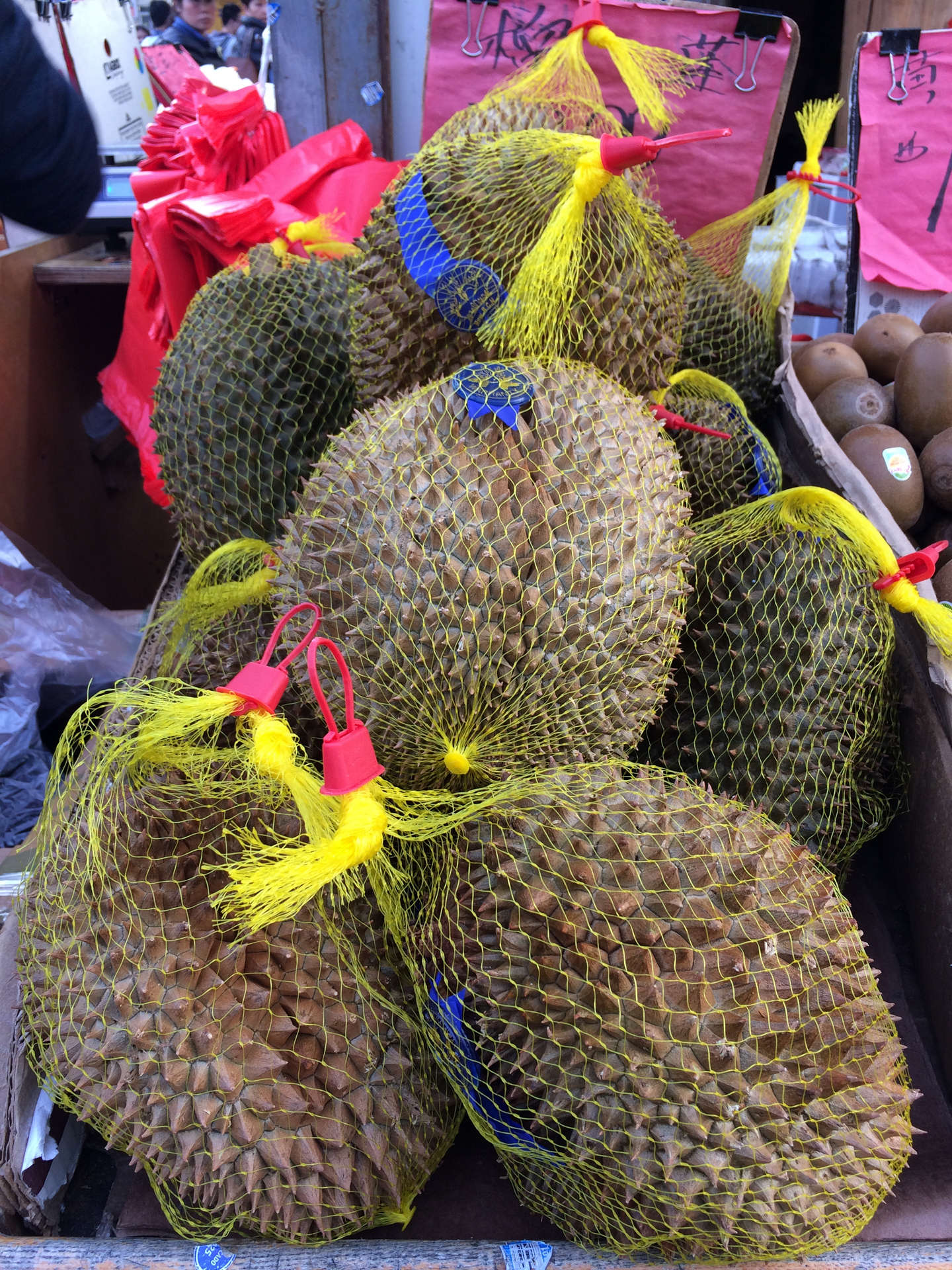 If you’re keen on hunting down the fruit itself, you can catch it outside almost any large Asian market. Durian is vaguely oblong, sometimes up to a foot long, weighing in at anywhere from two to seven pounds and sporting a brownish, greenish, spiky husk. You’ll generally spot them enclosed in yellow plastic net bags and from a distance, looking much like an angry pineapple.

Rather than splitting the husk yourself (it’s best left to professionals so don’t try this at home, kids), you can often find Chinatown street vendors who have already done the work and sell the fruit pre-sliced in plastic containers. 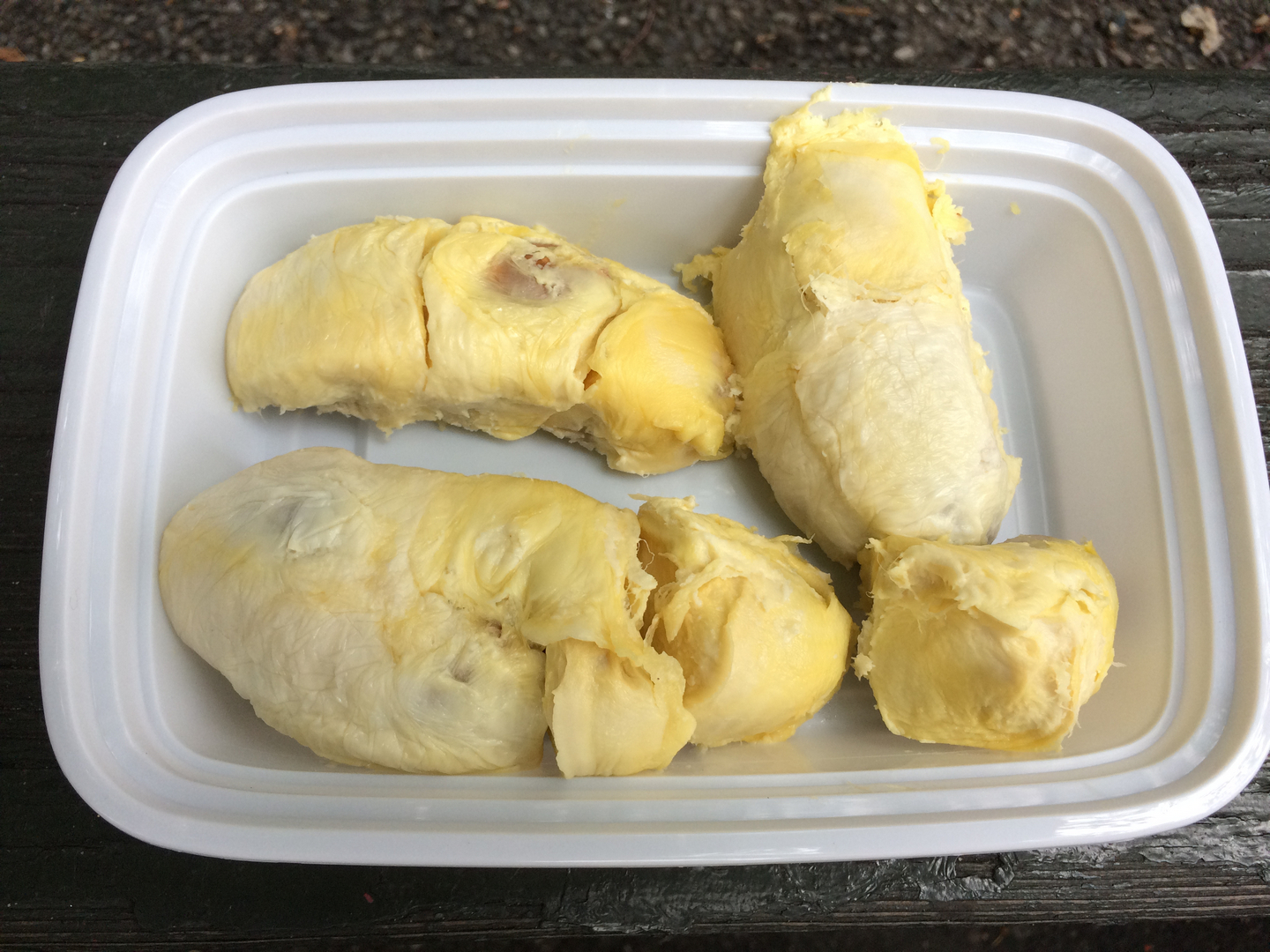 Inside the markets, you’ll sometimes come across frozen, whole durian… 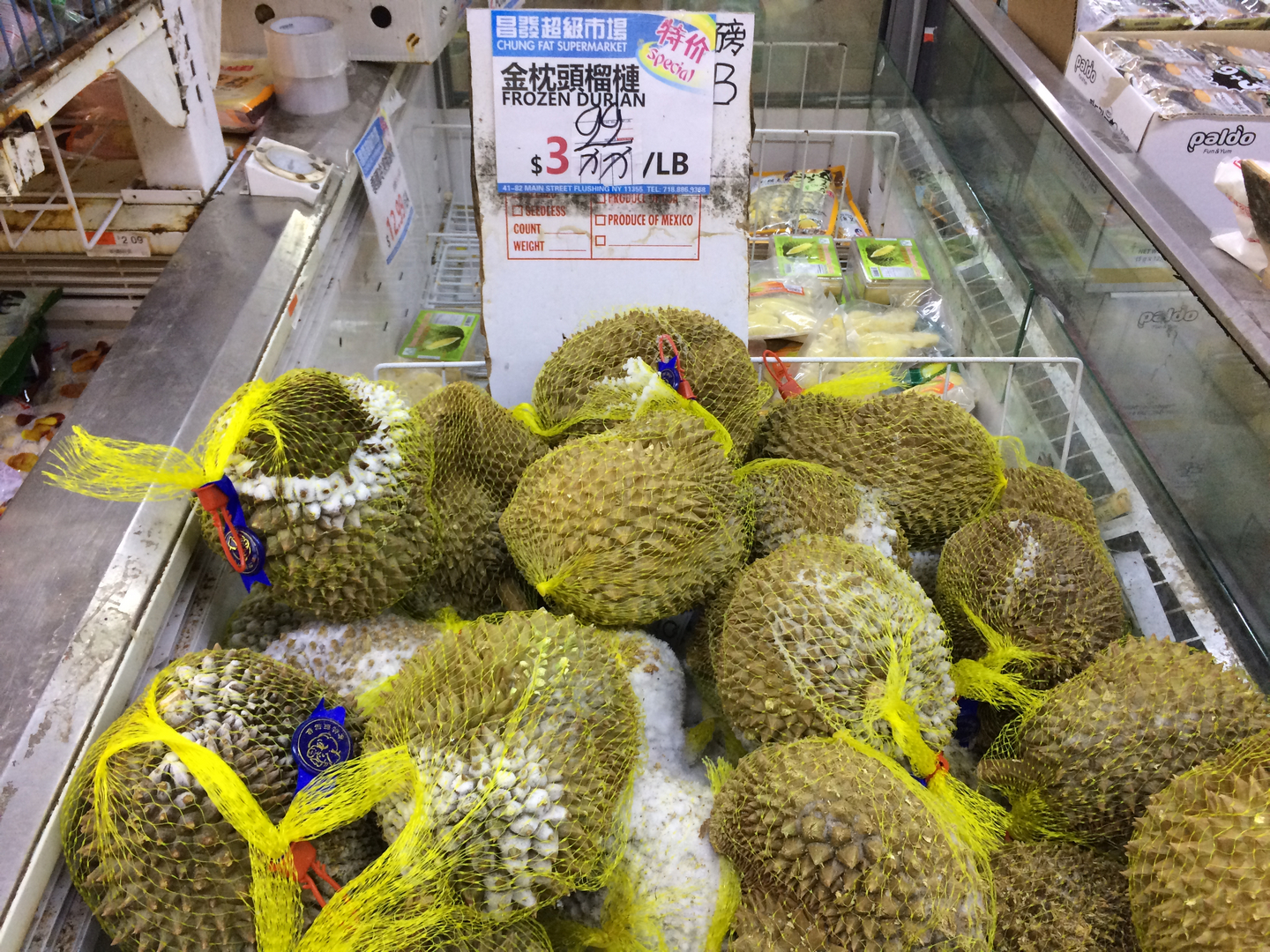 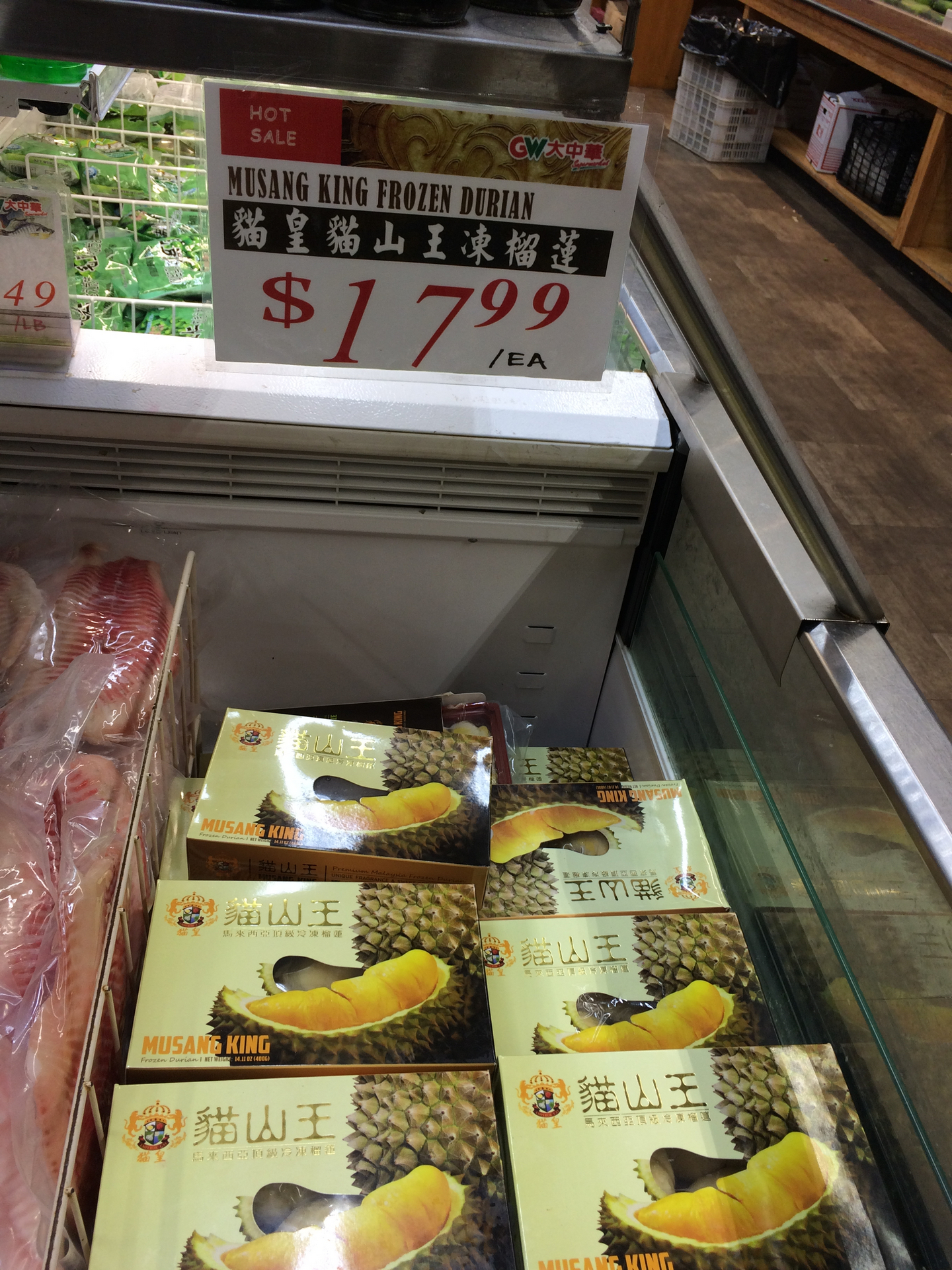 Note that the price per pound varies radically depending upon the variety. Don’t skimp: You get what you pay for. 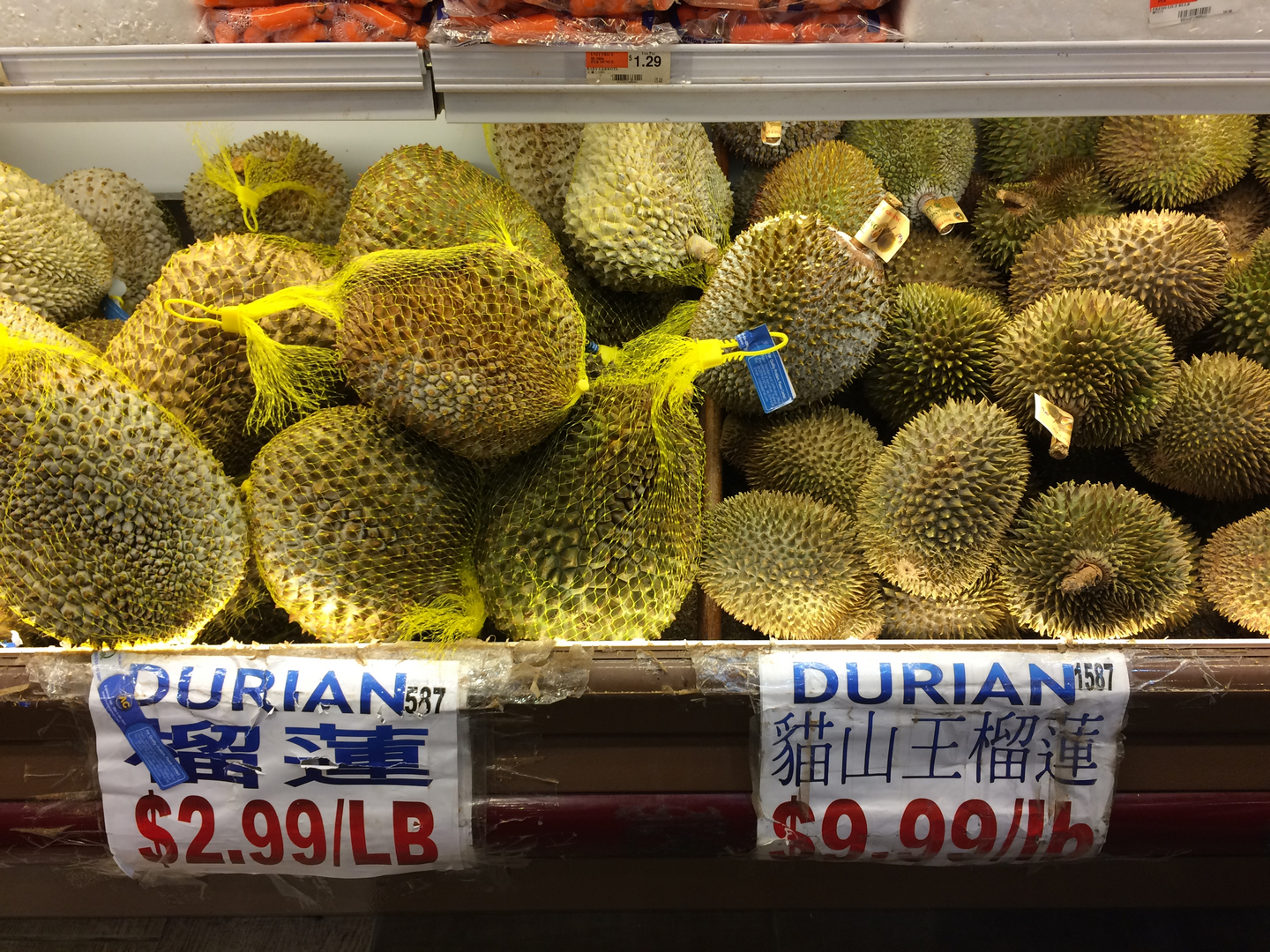 Bonus! Here’s a post I had written previously, “Durian’s Best Kept Secret”, recounting the story of a little known venue in Brooklyn where an assortment of durian cultivars can be purchased and enjoyed – and I did both, of course. Read on….