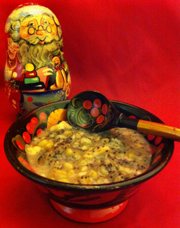 Christmas day had come and gone, but not so its delicious spirit. It’s not a religious thing with me; it’s more of a celebration of the spectacular panorama of international holiday foods that surrounds us this time of year. The problem is, the season just doesn’t last long enough despite my best efforts to prolong it. One year, I valiantly managed to extend the holiday right though Valentine’s Day, ignoring the fact that the festive red and green department store window displays now sported only red trim, wondering where the chipmunks were hibernating when I boarded the elevators, and upon returning home, trying to fathom how the branches of even my artificial tree were becoming brown and sere.

I know I’m not entirely alone in this, even though my behavior may be a bit extreme. Ask almost anyone about their favorite holiday foods and they’ll go misty and begin to wax rhapsodic about childhood memories of treasured treats that their grandmother used to prepare. In every corner of the world, there are traditional Christmas dinner favorites: festively bedecked meats and generations-old recipes for vegetables and pasta, all manner of fish and fowl, not to mention countless renditions of roast pork and baked ham in all its porcine splendor – that singular, universal, culinary triumph of domestic chefs around the globe, translated into a hundred languages and embraced by as many cultures as uniquely and definitively their own.

And then there are the international desserts: panettone, stollen, bûche de Noël, plum pudding, cookies, pastries, cakes, and candies of every stripe – the list is endless. Recently, a Swedish friend excitedly told me about risgrynsgröt. Her eyes practically lit up as she described the Christmas rice pudding served with thick, sweet fruit sauce (she said grape, I’ve read raspberry and red currant, but I can’t help but think lingonberry would nail it) that she so cherished.

In any event, in an attempt to maintain the culinary holiday momentum, I decided to venture into Brooklyn’s Little Odessa in Brighton Beach to see what Russian goodies I could find. Christmas hadn’t yet arrived there, so I was just in time for the festivities.

(Russians celebrate Christmas? Indeed they do, every January 7th. The Russian Orthodox Church still uses the old Julian calendar, therefore its Christmas celebration falls thirteen days behind that of the West. A little history: In the 17th century, Peter the Great brought Christmas to Russia, but after the revolution in 1917, religion was outlawed. Not about to give up their joyous tradition, Russians continued to decorate their trees in secret, until finally in 1935 the Soviet government gave in and sanctioned the practice – but as part of a New Year celebration! Call it what you will, Russians happily trimmed their “New Year Trees” until 1992, when it was again permissible to celebrate Christmas openly and Grandfather Frost and his granddaughter, Snow Maiden, could freely distribute presents to delighted children all across Russia.)

So off I went to Brighton Beach Avenue in search of holiday fare. There are two ways to spot Russian markets in that part of Brooklyn. The first is by their prominent signage touting “International Food” on the awning. Not “Russian Food”, not “Eastern European Food”, not “Ukrainian Food” or the like. Nope. Always “International Food”, as if hiding in plain sight. The second way, of course, is that everything is written in Russian with almost no English to be found. Russian is easy to identify as it is written using the Cyrillic alphabet. Essentially, when you look at Russian printing, you think that if only you had a mirror to hold up to it, you could probably read it.

Now, being a dedicated ethnojunkie, I dabble in a bunch of languages, “dabble” being the operative – and even then, rather generously applied – word. But I dabble mostly in food words in those languages. That means that I have vocabularies rich in nouns with precious few verbs to indicate what I want to do with them. For example, I can point to some stuffed dumpling temptation and say, “Что это? Мясо? Сыр?” (“What’s this? Meat? Cheese?”) Invariably, of course, that begets a rapid fire description of the tidbit in Russian which is my cue to gesture that I’d like one of each, please, and hightail it out of the store before any further inquisitions are levied upon me. I have just enough of a language to get into trouble, but not enough to get out of it.

Wandering into the prepared food department of one store, I spied a pint-sized plastic container of an unfamiliar grayish, soupy substance. Naturally, I was compelled to inquire.

“Да,” she nodded in the affirmative.

At this point, I realized that my reach had far exceeded my grasp. My Russian is as broken as a set of nesting matryoshka dolls missing two bodies and a head. Futilely, I retreated to English.

The patient, smiling woman behind the counter tore off a piece of butcher paper and wrote out “пшеница” for me. I read the letters slowly trying to pronounce the word. “Pshenitsa?” I asked. Detecting my curiosity, an even more helpful staffer went out of her way to grab a bag of wheat berries so she could point to the English word “wheat” to help me understand.

Needless to say, I bought a pint of the stuff and quickly took it home to do a little research and a lot of tasting. I learned that kutya is one of the most important dishes in Russian Christmas eve’s family feast. Best described as a porridge, it’s made from wheat berries, poppy seeds, honey, and customarily includes chopped walnuts and raisins. The wheat berries symbolize immortality and hope, the honey and poppy seeds represent happiness, tranquility, and success. It is eaten from a single shared bowl to connote unity, and a ceremonial blessing of the home often takes place. There’s a tradition among some families that involves flinging a spoonful of kutya up to the ceiling. Legend has it that if it sticks, this year’s honey harvest will be bountiful. (Kids, don’t try this at home!)

Most of the markets along Brighton Beach Avenue have their own recipe for kutya, each a little different from the last and all delicious, but never really straying from the main ingredients. The four that I’ve tried (ahem!) can be characterized as having a gruel-like, soupy texture, not as integrated as oatmeal, but almost thick enough to eat with a fork. They’re sweet from the honey and raisins, crunchy from the wheat berries and nuts, and distinctive and delectable from the poppy seeds. Kutya can be eaten warm or cold and is now one of my must-haves for the holiday season.

Personally, I think it makes a righteous breakfast. That is, when I’m not devouring the last of the panettone!