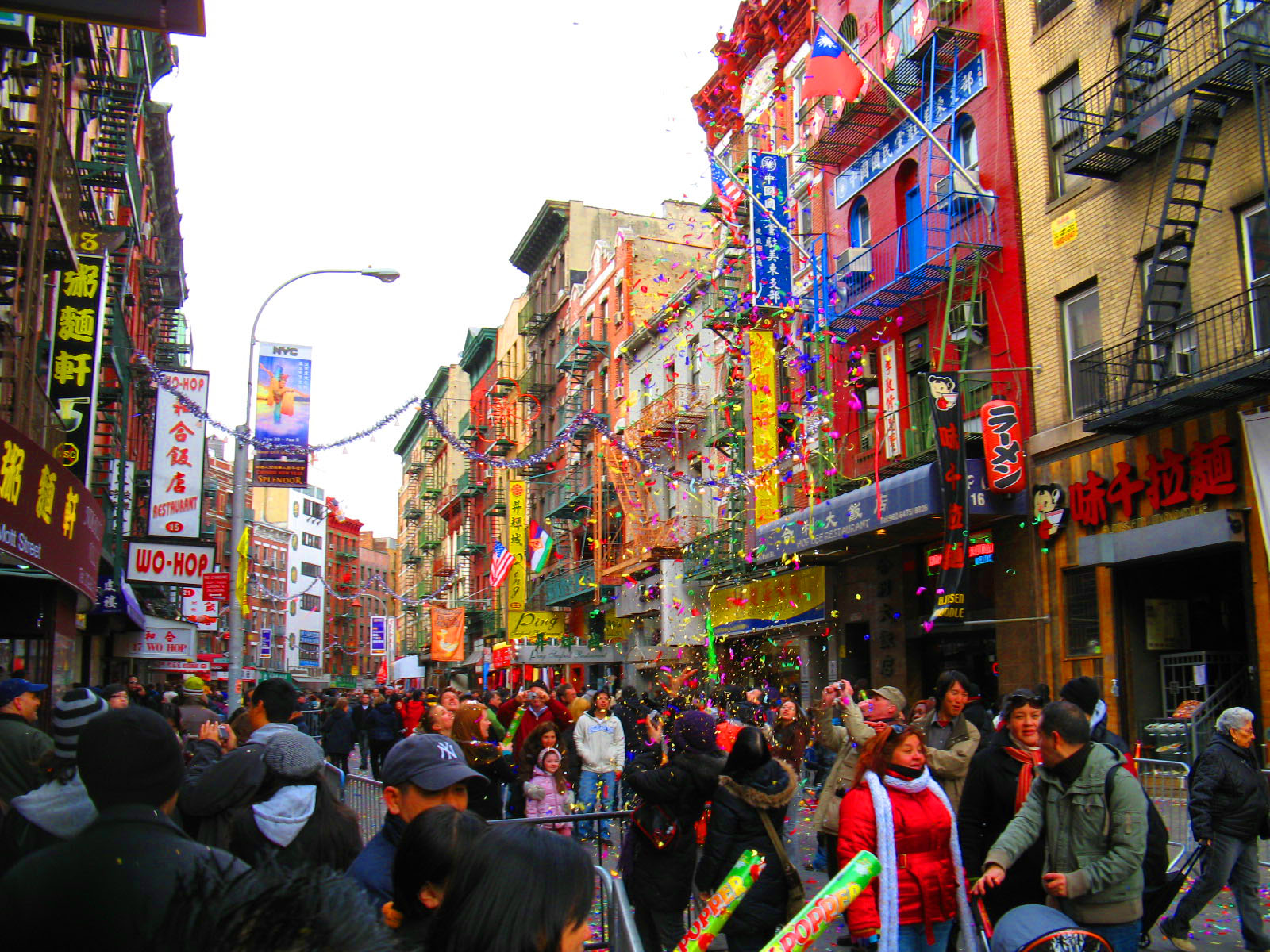 Gong Xi Fa Cai! The callithump of Chinese drums and cymbals played havoc with my ears as the pungent miasma of spent fireworks assaulted my nose. “These are my people!” I beamed. An equal opportunity celebrant, I was in my element.

I picked my way through the ankle-deep sea of technicolor metallic streamers and confetti. “Looks like a dragon exploded,” I mused. Shuffling from market to crowded market, each festooned with the accoutrements of the holiday, I searched for authentic goodies with which to welcome the Chinese observance of the Lunar New Year in style.

Definition: Chinese New Year, also known as Spring Festival, is a dazzling two-week long celebration occurring in January or February, a banquet for the soul that is laden with more symbolism than a Jungian interpretation of a Fellini dream sequence inspired by a Carlos Castaneda novel.

But nothing is more traditional to the Chinese New Year banquet than food-word homophones. As any precocious third grader will tell you, homophones are words that sound alike but have different meanings (for, four, and fore in English, for example). At these festive gatherings, a whole fish will be served, because the word for fish (yu) is a homophone for surpluses. Also gracing the table will be Buddha’s Delight, a complex vegetarian dish that contains an ingredient the name of which sounds like the word for prosperity.

(We don’t have that kind of thing in western culture, but maybe we should. Imagine if you rang in the New Year at an American restaurant by ordering the surf ‘n’ turf, a certain portent that this would be the year that you meat your sole mate.

Just don’t wash it down with wine.)

And no traditional food is more important than the ubiquitous Chinese New Year delicacy, nian gao, a glutinous rice cake sweetened with brown or white sugar and a homophone for “high year” — with the connotation of elevating oneself higher with each new year, perhaps even lifting one’s spirits.

Now, I had seen nian gao dished up and steamed in aluminum pie pans in every market in New York’s nine or so Chinatowns. But one particular variation packaged in a six-inch wide container shaped like a Chinese ingot (as many items are this time of year) caught my eye and beckoned to me. As I inspected it more closely, I realized that I could not for the life of me fathom how it open it! This fact alone was sufficient bait; I stood in line with my fellow revelers, paid, and took it home.

With bugged-out eyes and a glower that betrayed both puzzlement and frustration, I turned the semi-translucent vessel over and over again like someone who had reached a cul-de-sac with a recalcitrant Rubik’s Cube. The object was fashioned of two mirror image concave pieces of plastic fused together — plastic somewhat thicker than that of the average shampoo container — too thick to squeeze easily, for sure, and inseparable along the seam. I could make out an air bubble which migrated as I shifted its orientation, so I had a clue as to the texture of its contents — typical semi-firm glutinous rice cake, perhaps with a little syrup around it. Searching for an instruction manual, I found that Google had abandoned me: either no one else on the planet had ever encountered these contrivances or everyone else on the planet buys them every year and I am the only soul who is too inept to persuade them to yield their bounty. There was a tissue paper-thin label stuck to the bottom that showed the “best before” date as May, so even allowing for my customary procrastination, I had some time to solve the mystery. As long as that case remained closed, the case was not closed.

Wait a minute. What if some sort of key was hiding beneath that slip of a label? A slot to pry the two halves apart or a helpful arrow embossed on the obdurate plastic? Slowly, carefully, I began to peel back the label. THHHHPPP! The tiny air bubble instantly expanded to fill half the case as air rushed inside. Could it be that this gossamer leaf was the only protection the rice cake had from the elements, furry predators, and me? Such was the fact.

But then, I was confronted with a further conundrum. Lurking beneath said label was a hole the size of a half dollar. (Remember those?) This carapace was obviously a mold constructed so that its contents would delight the eye when served. But the only way I could see to get to the goods inside was to dig the stuff out with a fork! Not what they intended, I was certain. Somehow, there had to be a way to pry the halves apart without damaging the springy contents.

I hooked my thumbs on either side of the hole and yanked. Gnrrgh! Nothing. I laid it on the kitchen counter and pressed down with as much muscle as I could muster hoping that it would split along some weak, unseen fault line without damaging the contents. Again, it did not succumb to my efforts. I grabbed my nastiest knife and attempted to slice through the case along the seam. Nope, that’s not it either, I thought as I licked my finger where I had cut myself when the blade slipped.

Silently, the ingot mocked me. Was it designed this way on purpose? Some sort of arcane object lesson about anything worth achieving is worth struggling over? Or conversely, was it perhaps trying to tell me that I would never achieve riches, no matter how much I persevered?

Frustrated, I stashed the thing in a corner of my fridge. Days passed. The days melded into weeks. It was time to begin plans for Thanksagaingiving.

Definition: Thanksagaingiving is a joyful, annual family ritual. Not content to celebrate the merely dozens of diverse international and American holidays, each with its own panoply of tempting traditional foods, I created one more.

Over many years, I have developed, tweaked, and perfected an elaborate Thanksgiving menu that I prepare annually, much to the delight of my clan. And over those many years, we would ask ourselves, why don’t we do this more often? Pondering the possibility, we recognized that just about every month has some delectable holiday or seasonal foods associated with it. But there is that frigid, desolate chasm between Chinese New Year and the promise of tender spring vegetables that cries out for a joyous — and delicious — festival to uplift us from our disheartened doldrums.

Enter Thanksagaingiving. When we give thanks. Again. And rerun the whole November spectacle.

Invariably, each day as I loaded the fridge with more ingredients for our feast, it became necessary to move the Chinese ingot around to make space for the latest bounty. Now onto the second shelf, the customary residence for leftovers, now far back into the lower left corner where that jar of homemade boysenberry jam had been languishing for the last three months, now precariously balanced on a tall bottle of pandan syrup lying on its side in the least accessible corner — where the ingot unfailingly teetered, slipped, and fell, locking its neighbors into an exasperating jigsaw of jars and urns that prevented anything from being extricated from the shelf.

I had no choice but to toss it.

The fridge was once again barren. Wistfully, I gazed at the empty spaces that my forlorn little nian gao had been sequentially evicted from. Had I forsaken it prematurely? Would one more hour of negotiation have solved the mystery? Nostalgically, I remembered all the time we had spent together getting to know each other.

But then, I realized that all was not lost — come next Chinese New Year, I could purchase another ingot-encased nian gao and try again. I felt my spirits lifting.

And suddenly, I comprehended what had come to pass without my even being aware of it. In the light of that existential moment, the words “come next Chinese New Year, I could purchase another…and try again” echoed in my mind — and the cosmic meaning of this episode, the raison d’être for this tortuous journey became brilliantly clear:

It had been the maiden voyage of a new annual tradition!