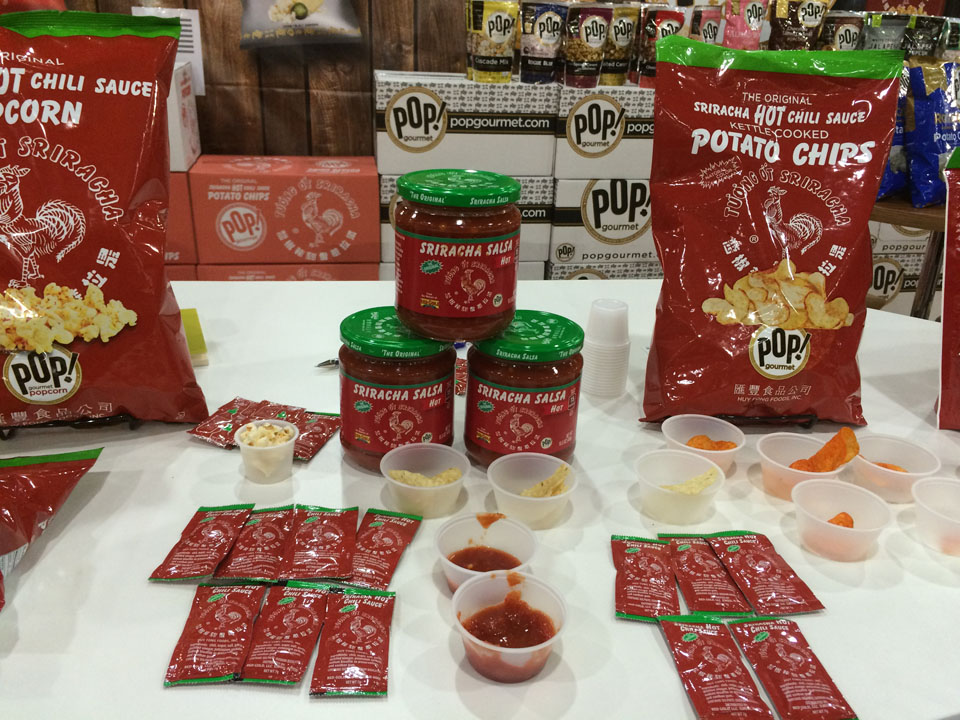 It is written in some ancient tome, or so my rather hazy understanding would have it, that during times of inclement weather the more sagacious among us hunker down in our kitchens and prepare mass quantities of pain perdu. Otherwise why would so many well-meaning mediarologists exhort us to make a beeline for our local supermarket in a frenzied quest for whatever remains on the shelves of bread, eggs, and milk?

So following the spirit of the law, although not the letter, I made the obligatory pre-disaster pilgrimage to stock up on essentials. I returned home and gingerly set my lumpily filled bags down outside my door. I was fumbling with the keys to my apartment when my neighbor, affectionately known to the denizens of my building as Windy, emerged.

Windy had a wiry frame and wore owlish Harold Lloyd glasses. His shaggy gray hair was usually half hidden beneath a weathered Australian cork hat. Somehow the corks were always in motion, even when Windy stood still, bobbing about as if propelled by some unseen force.

“Hey, Ethnojunkie! Got plenty of bread, eggs, and milk in there, right?”

“Um, yeah. I mean, no, not really. I’m not planning on making French toast.” The contents of my limp plastic bags were redistributing now, making themselves more comfortable on the dingy tile floor as I continued to grapple with the lock.

“All ready for the mother of all storms?”

“I thought that was Sandy.”

“Yep,” he continued, ignoring me. “The Blizzard of ’16. Snowmageddon. Snowzilla, they’re callin’ it. The blizzard to end all blizzards. Snowpocalypse….”

“Been watching a lot of TV, Windy?”

Windy himself could generate a gale greater than even the most virulent hurricane might ever aspire to. Having pretty much exhausted his supply of snowstorm metaphors, he went on to do what he did second best: pry.

“Got yer emergency preparedness kit ready?” He craned his neck and peered into my bags to inspect their contents. I slid them out of his line of sight with my foot.

“Sure thing,” I lied. “I’ve got wind-up batteries, sustainable “last-forever” wick-free candles, and solar powered #2 pencils, sharpened, of course.” At that moment, one of the bags shifted and my bottle of Sriracha tumbled out.

A bewildered look passed across his face as he squinted at the bottle with a gimlet gaze. “What kind of emergency were you expecting?” he sniffed. He was right. My idea of an emergency preparedness pack was somewhat skewed. “What’s in that bottle anyway?”

“It’s Sriracha. Like a kind of hot sauce,” I replied, stuffing it back into the bag and finally pushing my door open.

“That’s not Sriracha! Sriracha has a rooster on it! This one’s got a shark!”

“Right. Well, it’s a different brand. Sometimes I like it better than Huy Fong, the one with the rooster.”

Seizing the opportunity to go on about ethnic food, I began, “Well, they’re all chili, garlic, and vinegar, plus sugar and salt, but that’s where the similarities end. This one is a little sweeter….”

He interrupted, “No, no, I mean what’s the difference which one you get? Sriracha is Sriracha. Okay, I gotta go back inside and watch the storm.” He pivoted on one Birkenstock and marched back into his apartment, corks bobbling wildly, never allowing me to inquire as to whether he thought mayo is mayo or cola is cola.

I scooped up my bags and lugged them into my apartment, bemused by the interchange. But my reflection on our conversation wasn’t because of Windy’s dismissal of my brand preference. If Windy knows about Sriracha, everybody knows about Sriracha. Years ago the darling of a few culinary cognoscenti, the stuff is now ubiquitous.

Huy Fong brand (with the rooster imprint) was developed in 1980 in California by a Vietnamese-American; by 2010 Bon Appétit magazine had crowned it “Ingredient of the Year”. I’ve spotted it gracing the tables of diners and restaurants having no pretense of being Asian. It’s in every supermarket – they even sell it at Bed, Bath & Beyond. And now it’s available in individual packets like ketchup or mustard, not to mention their line of Sriracha popcorn and chips.

Shark brand, the favorite of Andy Ricker of Pok Pok fame, is a product of Thailand and is markedly distinct from Huy Fong.

So pitting the rooster against the shark, let’s examine the differences (with apologies to Windy).

Huy Fong is tangier and sharper (think horseradish kind of sharp) with a coarser texture and tiny bits of chili within. Shark is thinner, sweeter, more garlicy, more vinegary, a little herbal and significantly brighter.

Incidentally, Huy Fong also makes a chili garlic sauce, available in 8 ounce jars, that’s thicker than their Sriracha (you would spoon it out rather than squirt it); it’s earthier, more garlicy, less sweet and less vinegary. Just for kicks, I tried mixing the two Huy Fong products together and I thought the combination was great – not to mention that if you try this at home, seasoned Sriracha aficionados will ask you which brand you’re using. Simply smile coyly and say it’s your custom house blend; it’ll be our little secret. 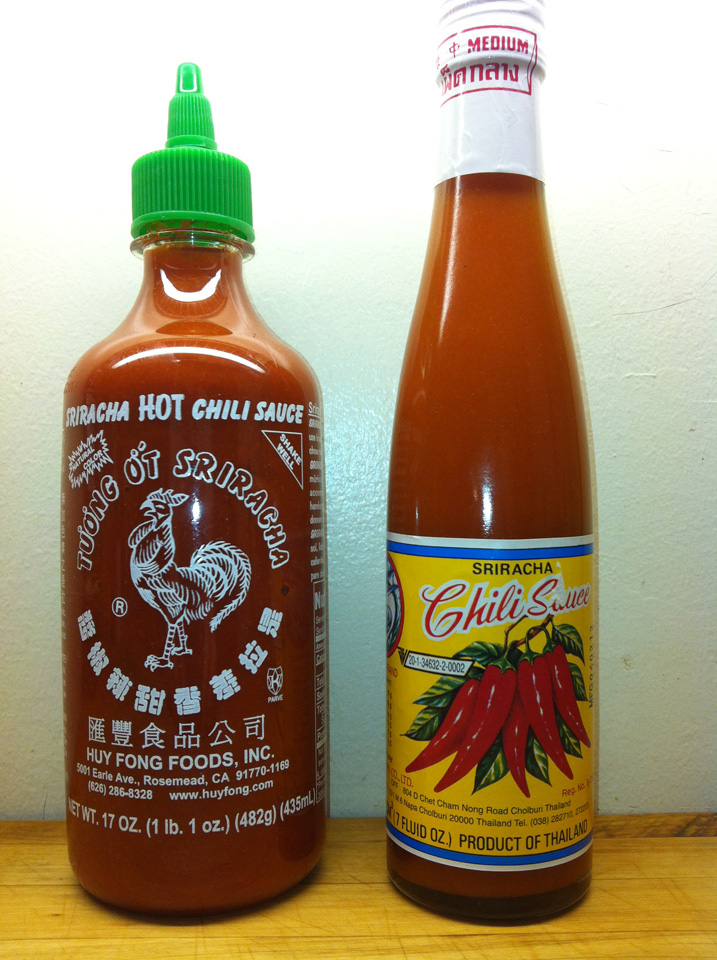 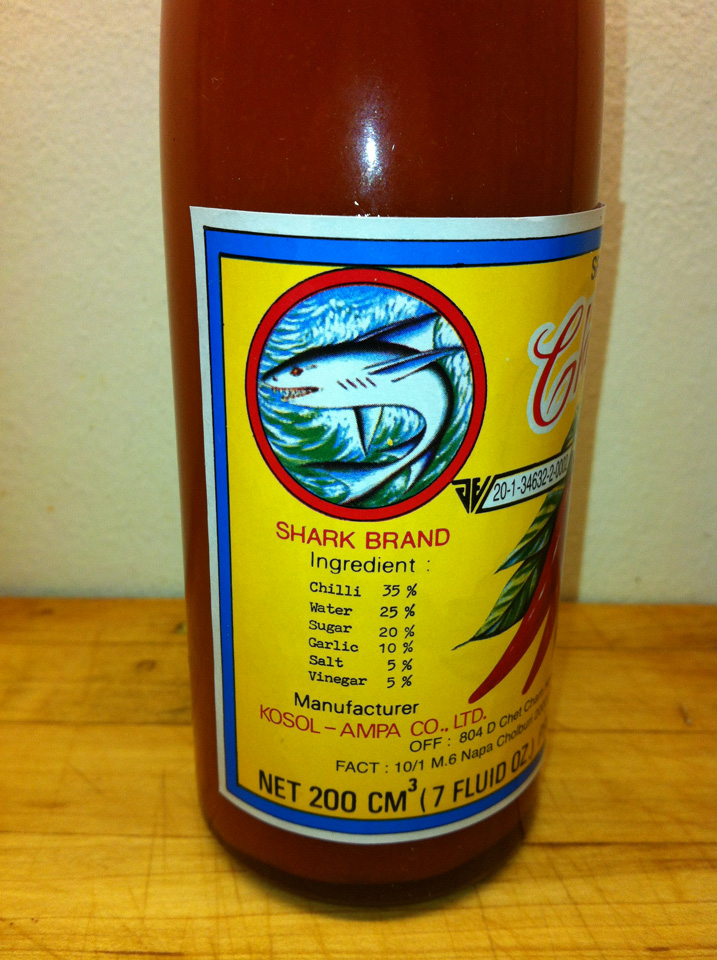 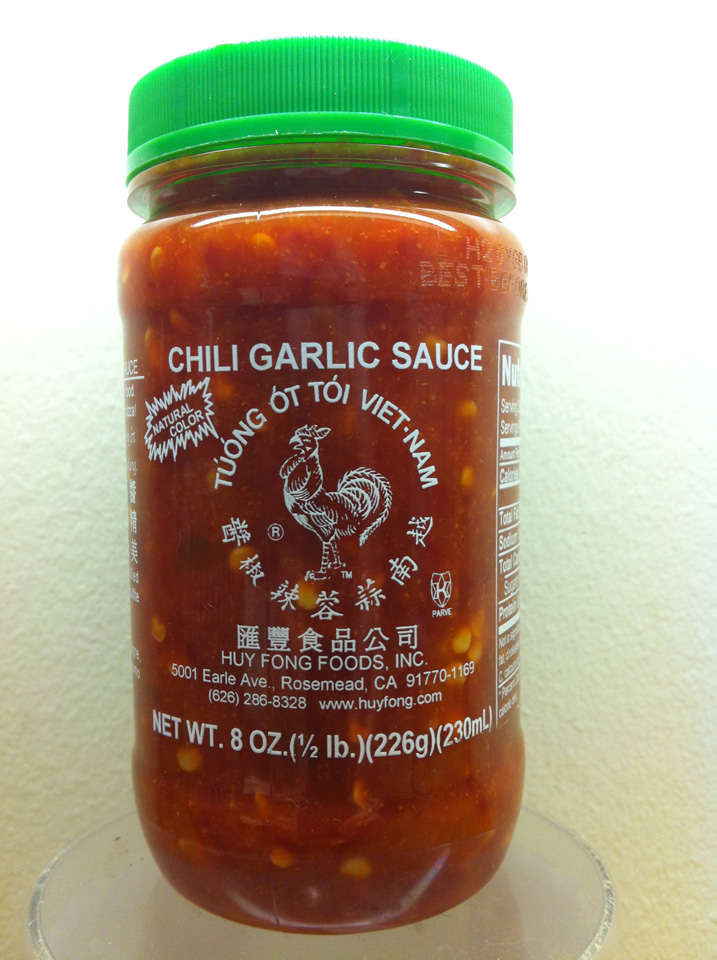 Which do I like better? It depends on what I’m doing with them, but I lean more towards Shark for straight-out-of-the-bottle applications. And yes, there are plenty of other brands as well. Perhaps I’ll write about those when my emergency preparedness pack needs replenishing during the next Blizzard to End All Blizzards.