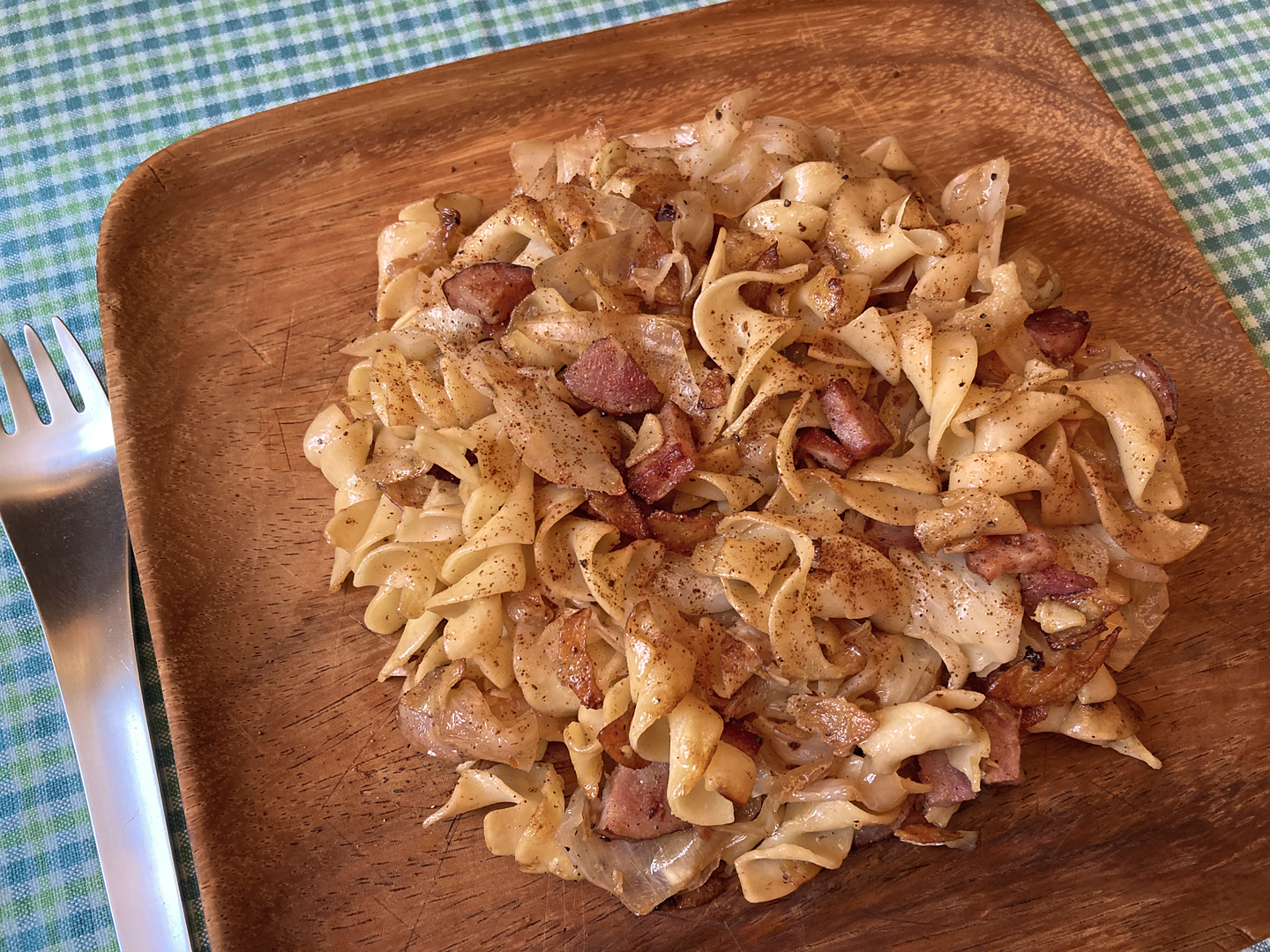 Actually, it’s not about when, it’s about where. Here’s what happened:

The weather was more than agreeable so I decided to take a walk to the local farmers’ market – just looking, thank you, those $8 organic heirloom tomatoes are way beyond my pay grade these days. The problem with “just looking” is that you actually see things. Things like a Brobdingnagian cabbage that was flawless, dirt cheap, and the circumference of an oversized beach ball. I rolled it home and, trying to think outside the box grater, proceeded to burrow through the interwebs in search of cabbage recipes other than coleslaw, stuffed, or soup so I could to put this behemoth to good use. I found 53,900 results for something called haluski; 22,200 results for halusky; 11,600 for halushki; and 3,800 for halushky.

Now, many years ago, I developed a delicious but agonizingly labor-intensive recipe for Bryndzové Halušky, a Slovak national dish: diminutive potato dumplings that involved the adept use of a special kitchen tool (a halušky strainer) and frustratingly hard-to-find bryndza, a pungent sheep’s milk cheese. That had been my halušky connection – with nary a shred of cabbage to be found therein. (And yes, I know that some cultures toss in sauerkraut on occasion.)

I checked into Wikipedia for some orthographic advice. Traveling though Slovakia, the Czech Republic, Poland, Ukraine, Lithuania, Romania, Hungary and other corners of Central and Eastern Europe, the spellings and recipes were similar, but nationalized, of course. But here’s the kicker, ibidem: “In the United States, most adapted halušky recipes call for egg noodles rather than potato dumplings. Some American cooks include loose, cut, and fried green cabbage…compelled by simplicity [check], difficulty in finding bryndza or acceptable substitutes [check!], and access to affordable cabbage [check!!]….” (Italics and bracketed comments mine.)

Okay, American style gets the nod and as a bonus it only required ingredients I already had in the house: butter, egg noodles, butter, and onions. (Did I mention butter?) Some of the recipes called for bacon but I chose to use the last two hunks of Polish sausage lurking in my freezer from a recent foray to Greenpoint; if you’re curious, they were wiśniowa and zwyczajna (my spellcheck was traumatized and still is in recovery from that one – feel free to send flours).

The recipe is simple and pretty obvious really, but a couple of notes: Cut the cabbage into pieces similar in size to the noodles, and cut the onions into pieces like the cabbage. And most important: you’ll be frying the veggies and boiled noodz in a cowful of butter, but don’t just cook to soften: you want them to pick up some color and get a little crispy – that’s essential – and those crunchy bits sticking to the bottom of the pan are an integral part of the dish too. It’ll require a bit of patience, but keep your focus on crispy and brown (even my plate was brown, but you don’t have to get that obsessive about it) and you’ll turn out some hearty Eastern European comfort food that will Czech all the boxes. 🙃

2 thoughts on “When Is Haluski Not Haluski?”