Okay, I freely admit it. I like steamtable buffets. The good ones, at least. Not because I harbor any porcine proclivities (shh!), but rather that I’m keen on the idea of tasting one bite of many dishes as opposed to sitting down to a plate of “hunk o’ meat and two veg”. It’s why I love dim sum in Chinatown. So you can imagine my delight when I discovered a row of mostly-Caribbean-but-bordering-on-African-with a-hint-of-Middle-Eastern steamtable joints while strolling along Brooklyn’s Fulton Street.

Here’s what you need to know to join in the fun:

Pricing can be tricky if you’re a newbie. Your container is weighed and priced by the pound. But that’s where things can get confusing. If you take mostly vegetables or less costly items like salad, one price applies; add some heftier proteins and the price per pound for your whole order goes up. And then there are certain “special items” (like baked salmon) that carry an even weightier price tag ($11.95 instead of $6.95 per pound, as a rough example). Grab enough of that one and the cost of what was mostly greens can escalate from lunch to dinner level. So choose judiciously. If you want to taste that $11.95 pasta and fish dish, put as much as you want in a small container and it will be weighed and priced accordingly. And how does that pricing determination happen? The person at the checkout station peers into your container and makes a decision. In my case, it was always more than fair. But forewarned is forearmed and there’s nothing wrong with checking out a couple of containers at different cost levels.

Some of the spots have excellent signage, both in terms of what the dishes are and what you’ll pay per pound for various choices. At the other end of the spectrum, some have no signs at all – neither price nor identification – and generally there isn’t much opportunity to ask questions. But again, I want to emphasize that in my experience, pricing will be fair and for the most part you’ll leave full and happy. In terms of what you’ll be eating – that’s the fun part: try a little bit of lots of things. Chances are you won’t be disappointed and you’ll be better informed on your return visits. 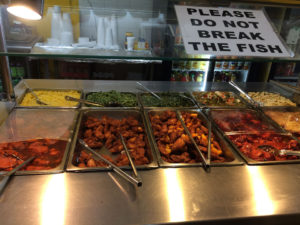 In many cases, you’ll find whole fish accompanied by a sign warning, “Please Do Not Break the Fish”. A good excuse to go with a friend, I should think. Each of you chooses a number of items, but only one of you lands a fish and then you can share when you get to your table. More fun and perfectly legitimate.

Most of these places are Halal, so if you see something that looks or tastes like pork or ham, it’s probably smoked turkey.

A few venues are worth a mention:

• Soldier Place at 1444 Fulton St. was as far east as I ventured for this run. There was an emphasis on Jamaican food here. Beef dishes were tender if not exciting. Chicken dishes were okay (skip the red sweet & sour variation), and remember that anything purporting to be jerk chicken at any of these restaurants is usually baked chicken with jerk seasoning as opposed to the real (wonderfully smoky) deal. There was serviceable mac ‘n’ cheese along with some Island specialties like bammy (Jamaican cassava flatbread) and dumplings. Standouts included most of the fish offerings like saltfish – and that pasta and fish dish was certainly tasty; tempting Jamaican escovitch fish came out as I was leaving. You may know that “ground provision” or simply “provision” is a West Indian catchall term that includes yams, cassava, taro, breadfruit, plantain and more and you’ll usually find them combined in a single dish. Here, each type of starch swims in its own container making it easy to cherry pick your favorite. Drinks included some delicious Irish moss and ginger beer. There were five tiny tables and a sign that promised ackee and saltfish for breakfast (so I’ll be back); a poster outside trumpeted “Big Buffet”. No lie.

• Smokey Island Grille at 1274 Fulton St. was home to hard core West Indian cuisine. You’ll score curry goat, oxtail, a number of varieties of rice, and reliable mac ‘n’ cheese along with a sizable array of other options; don’t forget the Caribbean desserts at the counter. Avail yourself of the hand sanitizer as you enter the steamtable area. Prices (variable, so pay attention) and choices are clearly labeled.

• Al Masry at 1178 Fulton St. was a blend: some soul food, some Island, and a little Middle Eastern. A good mix, but no labels. Certainly there’s nothing you won’t recognize, but if there are five dishes that are obviously chicken, you won’t be able to tell what they are without a scorecard. That’s true for all of these restaurants. Just another reason to take a tiny portion of each. Plenty of variety and lots of seating. 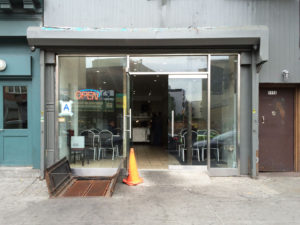 • In my opinion, the best of the lot was International Cuisine at 1174 Fulton St. A wide variety of offerings, some African food including couscous, porridge, and goat along with soul food and West Indian staples like oxtail and dumplings: the “International” moniker is appropriate. Not only does this place not label the food or the prices, but the restaurant itself is hiding in plain sight: no name on the front or even inside, and not even an address except on the building next door! 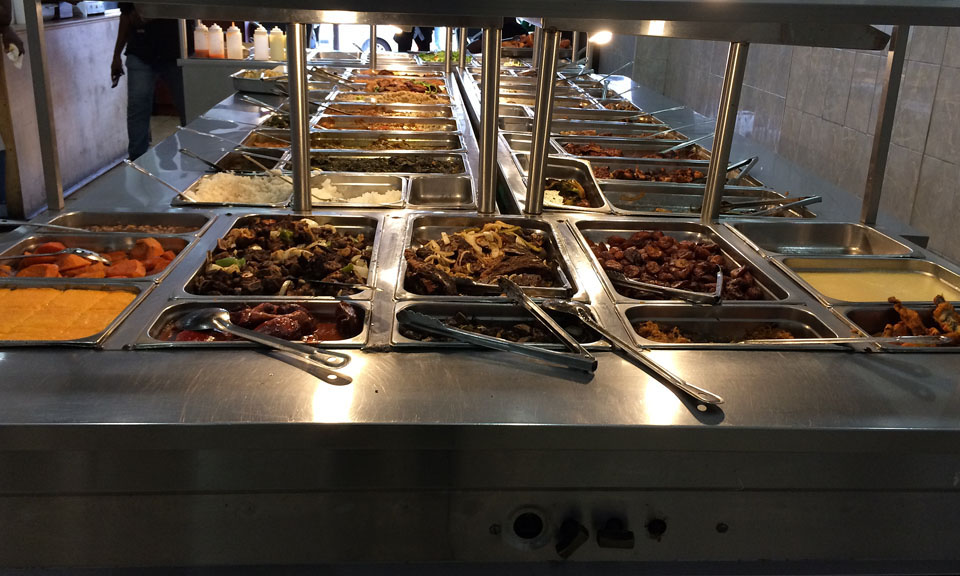 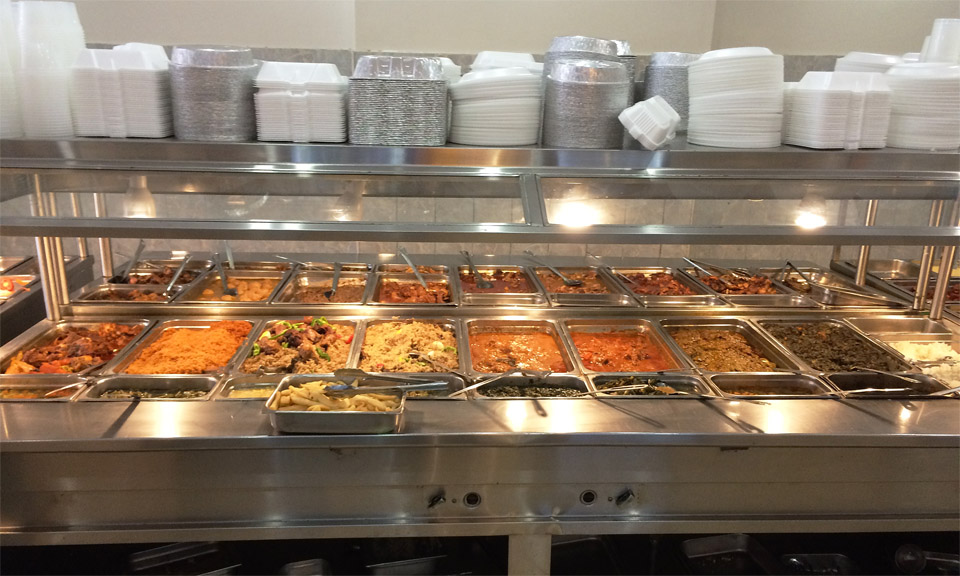 But the food there was very tasty, the selection left nothing to be desired (see photos above) and there were plenty of tables. If you’re going to venture out along Fulton St., try this place first.

If, like me, you’re into African cooking, there are a number of markets along the way that can supply some basic needs like stockfish, smoked fish, and spices so you can make a day of it if you have the time and the inclination.

And that was only the south side of the street! Another visit beckons and I’ll add to this post as I stumble across more treasures.