When I write about restaurants on Instagram, they’re usually brief takes accompanied by a photo or two. (You can see my feed right here on ethnojunkie.com, updated almost daily, by selecting the “Instagram” category from my home page – no signup required.) But because of Instagram’s character count limitations, it’s often necessary to break up a review into several parts. This one originally appeared as three posts, published on October 22, 24, and 25, 2019.

I’ve been intrigued by the cuisine of the Uyghurs ever since I first experienced it at Café Kashkar about a decade ago. Primarily a Muslim ethnic group, they reside in the Xinjiang region of northwest China near Kyrgyzstan and Kazakhstan; as you’d expect, the fare is a comingling of Chinese and Central Asian cuisines. Because of the political conflict in the Uyghur Autonomous Region, the public at large is becoming more aware of the plight of the these people who are in essence being persecuted for aspiring to pursue their lives and their culture in a homeland of their own, an “Eastern Turkestan”. 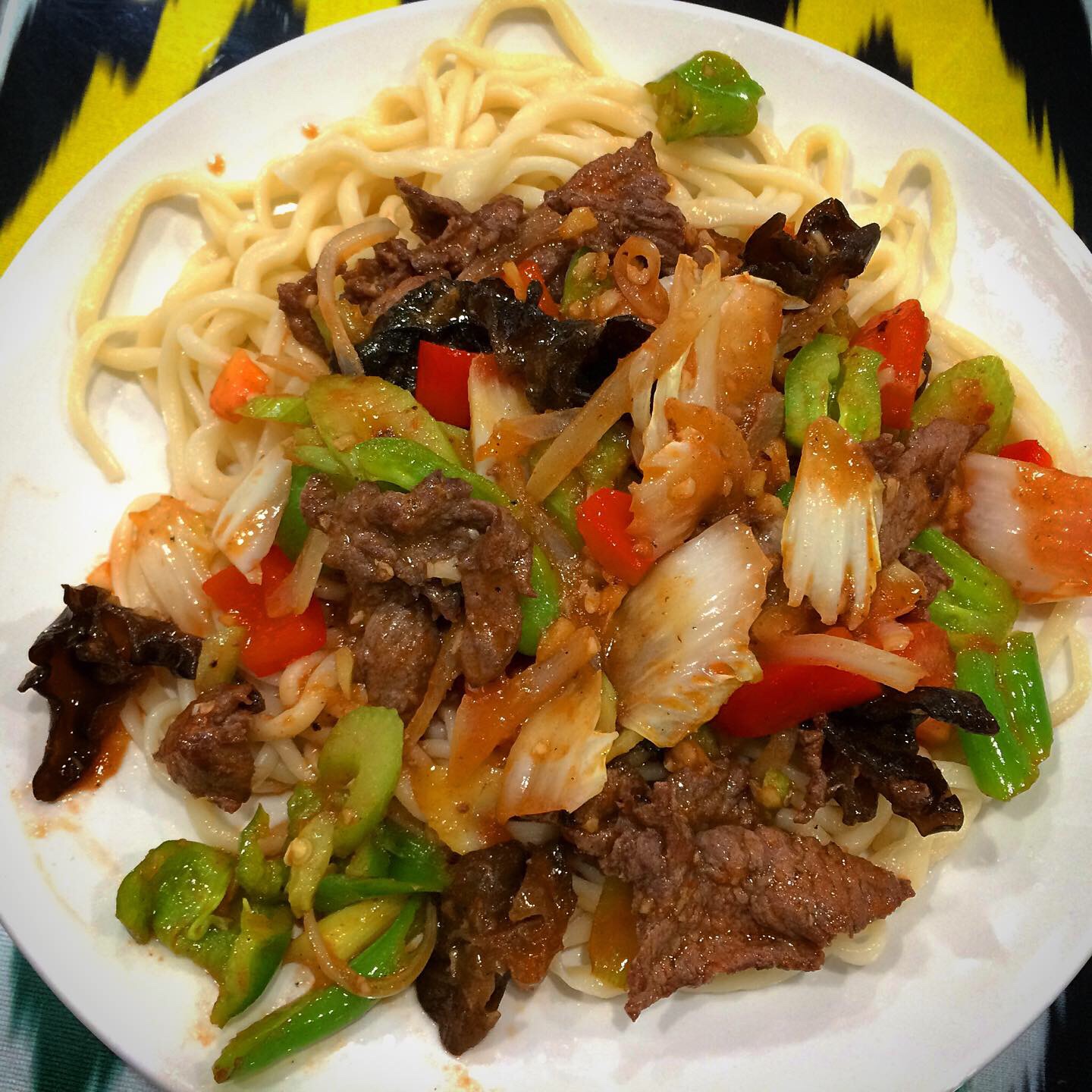 At Nurlan Restaurant, 43-39 Main St, Flushing, one of several options featuring these chewy noodles was topped with a slightly spicy lamb and vegetable mélange. Any attempt to capture the obligatory noodle-lift photo proved nigh on impossible since this plate arguably contained one long, coiled noodle and hoisting it to the max would have crushed even Stretch Armstrong into humiliating defeat; happily, scissors are provided to ward off subsequent muscle aches. Acrobatics notwithstanding, it was a tasty dish. 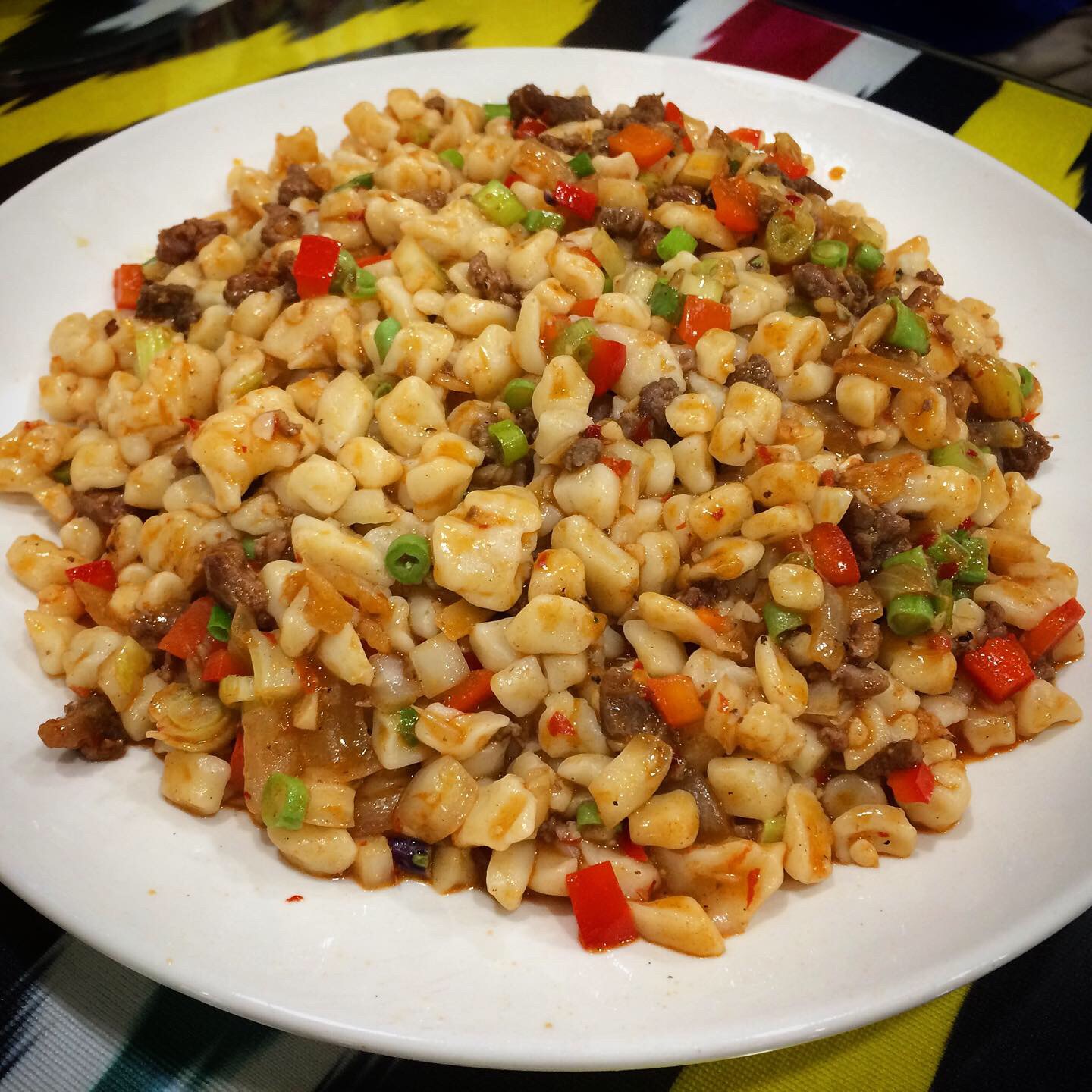 Geographically appropriate linguistic notes: laghman is a cognate of lo mein and ding, in Chinese food environs, refers to cutting into dice. So here we have diced noodles, with similarly sized bits of meat, scallion, onion, and red and bell peppers, easily as delicious as the Nurlan Laghman above. Personally, I think a big ol’ spoon is the best method of conveying them lipward. 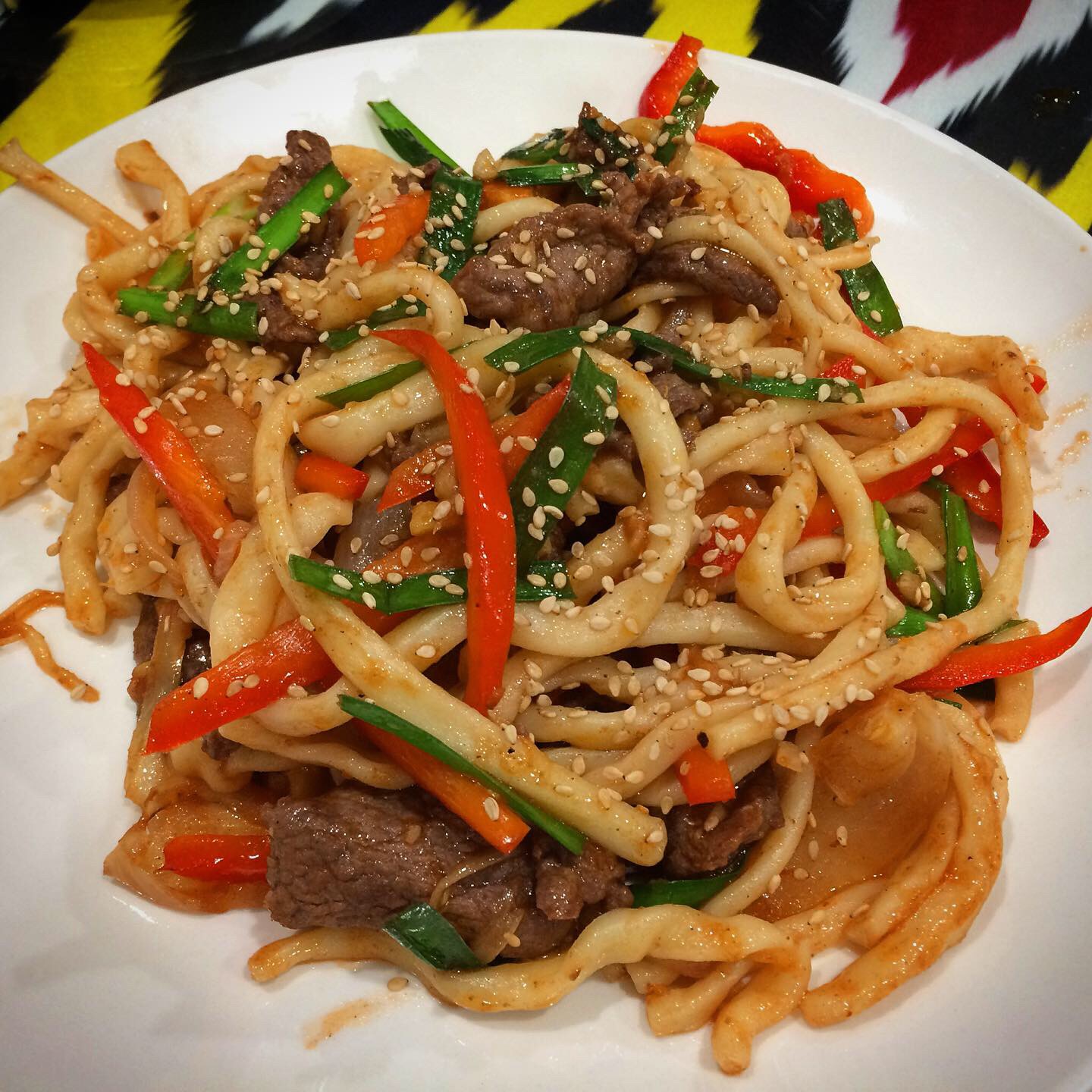 Stir Fried Noodles, here incorporated into rather than providing an underpinning for the stir-fry, strewn with sesame seeds. This one was kicked up with what I’m pretty sure were Sichuan peppercorns, a welcome contrast. 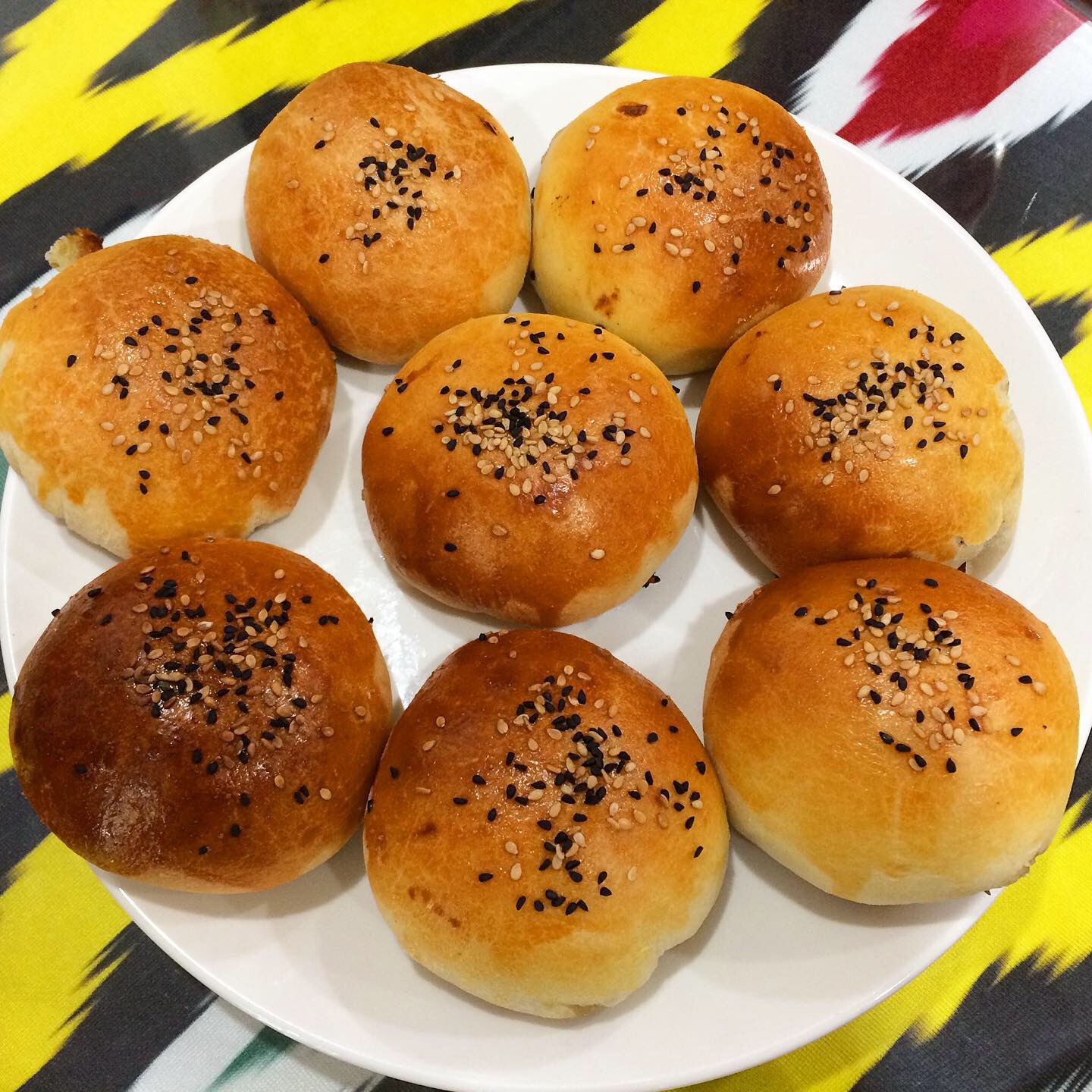 If you’re at all familiar with Central Asian cuisines then you know samsa. The linguistic and culinary cognate of samosa found in India (and throughout Southeast Asia, Africa, and the Middle East to be sure), Nurlan Restaurant, 43-39 Main St, Flushing, serves up this authoritative Uyghur version. These plump, baked buns stuffed with chopped lamb and onion topped with two-tone seeds would make a satisfying snack by themselves had they not been part of a grander lunch. 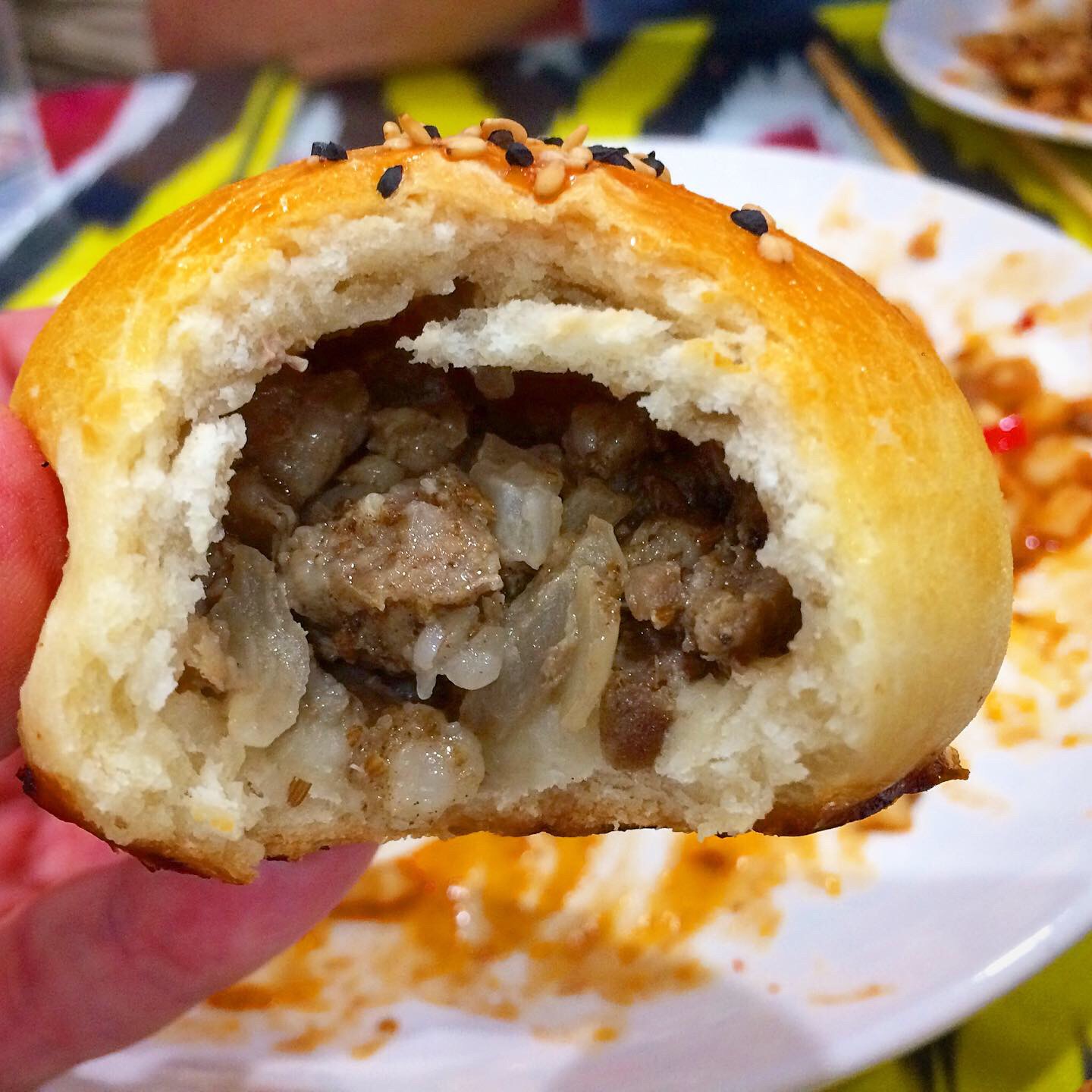 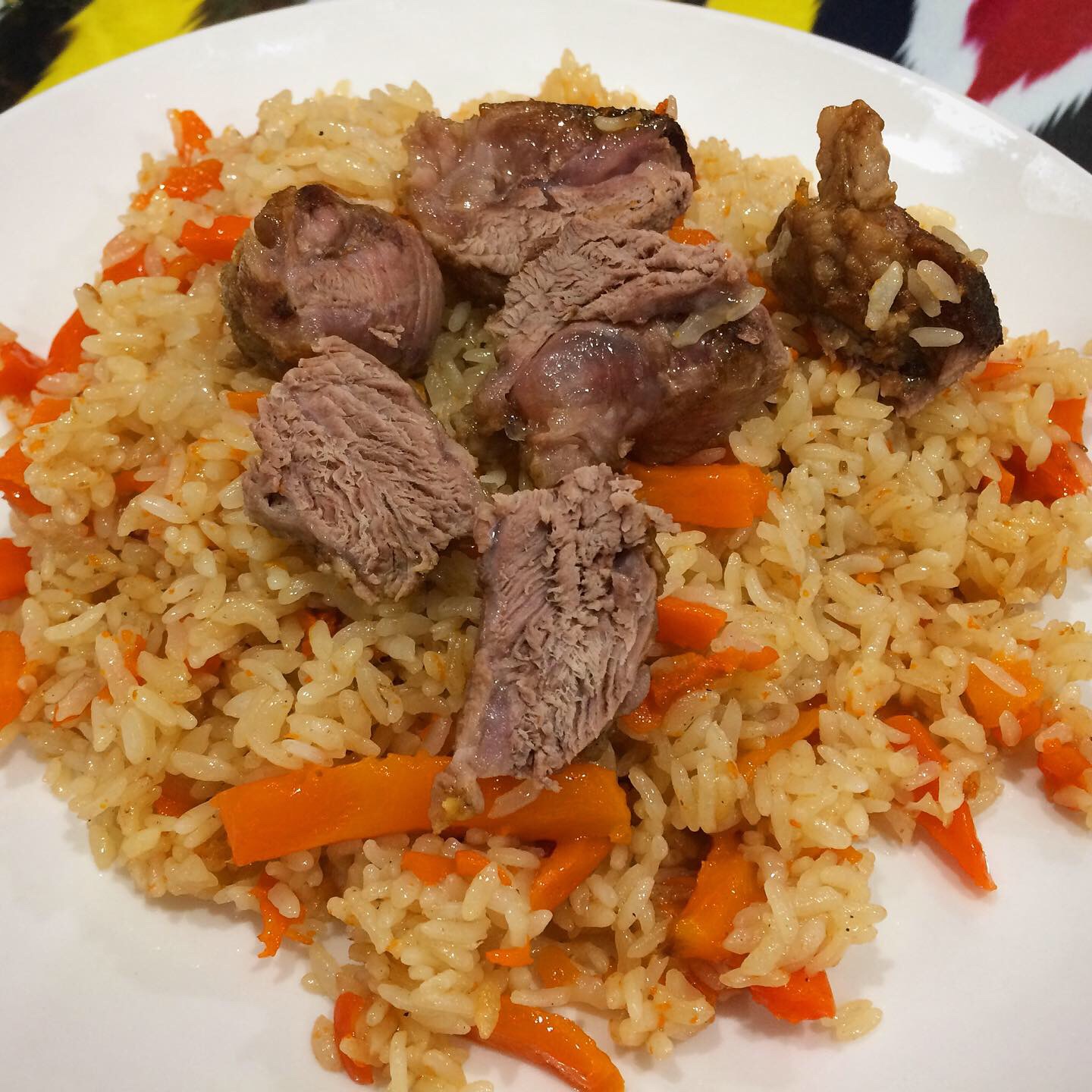 More fun with cognates! This is Polo. Its pronunciation, puh-Law, makes the connection to pilau, pilaf, and plov an effortless one. The rice is cooked in broth (I’m assuming lamb) which produces a savory, perfumed dish enhanced by carrots and the lamb that gave its all to the stock. 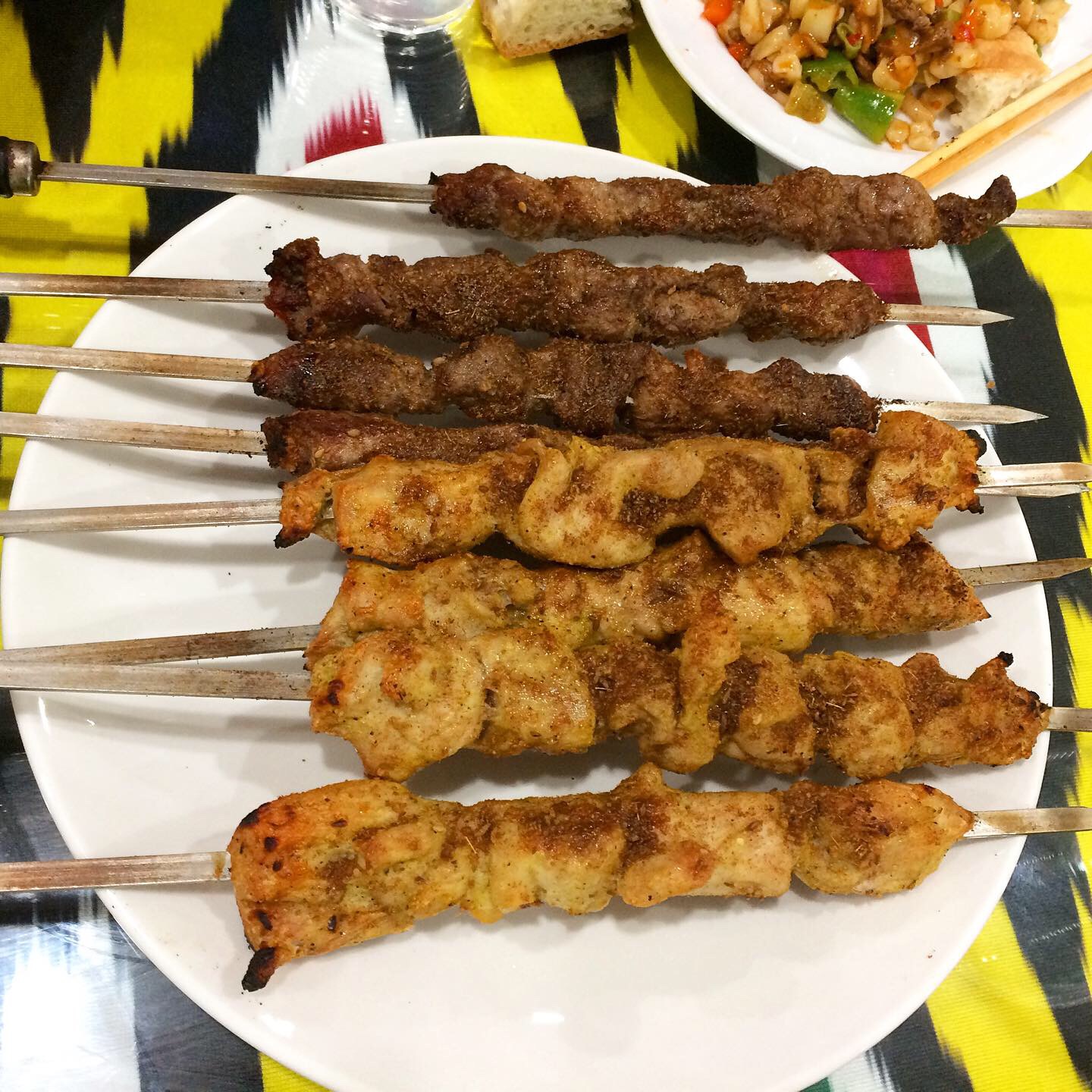 Tender and piquantly seasoned, that day they partnered with… 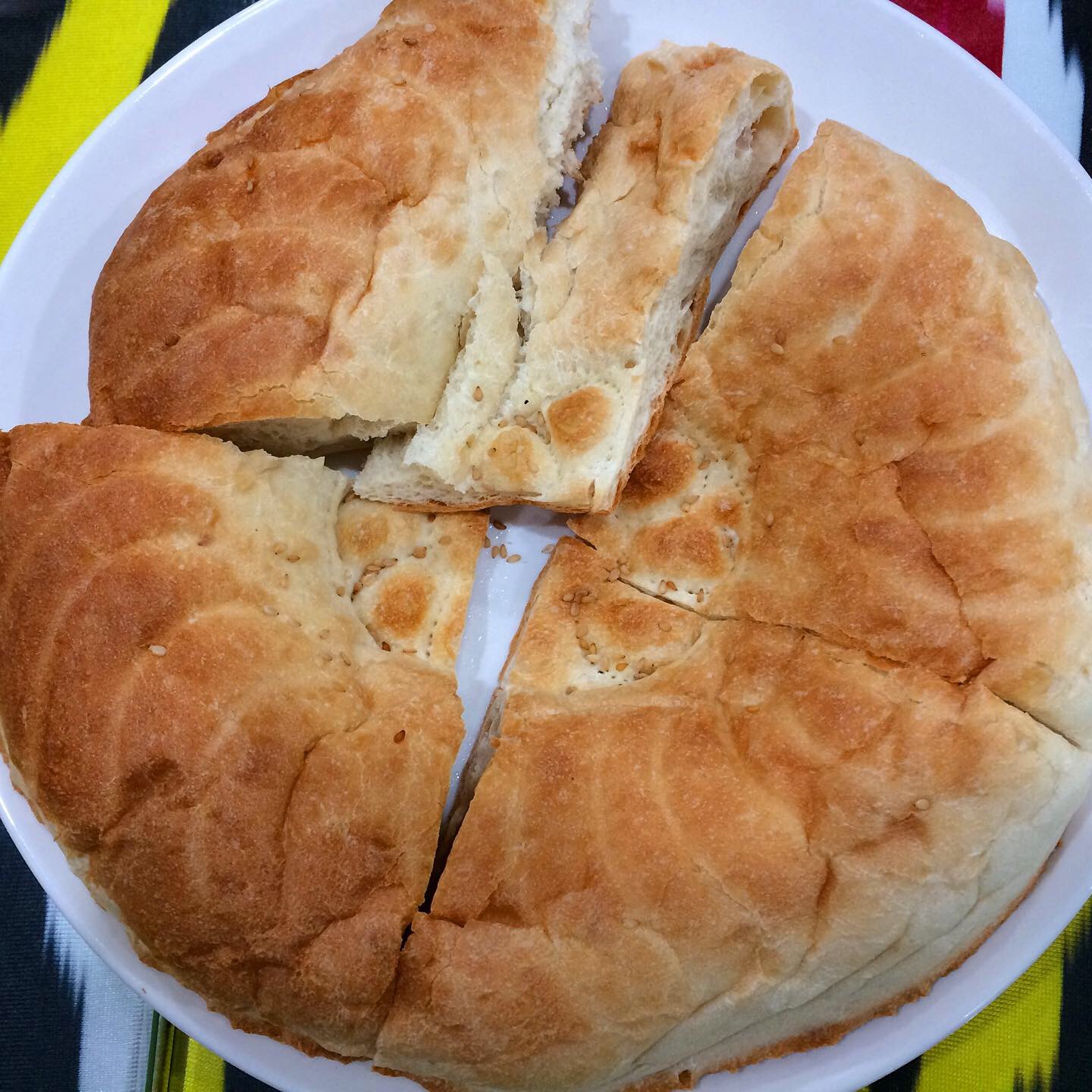 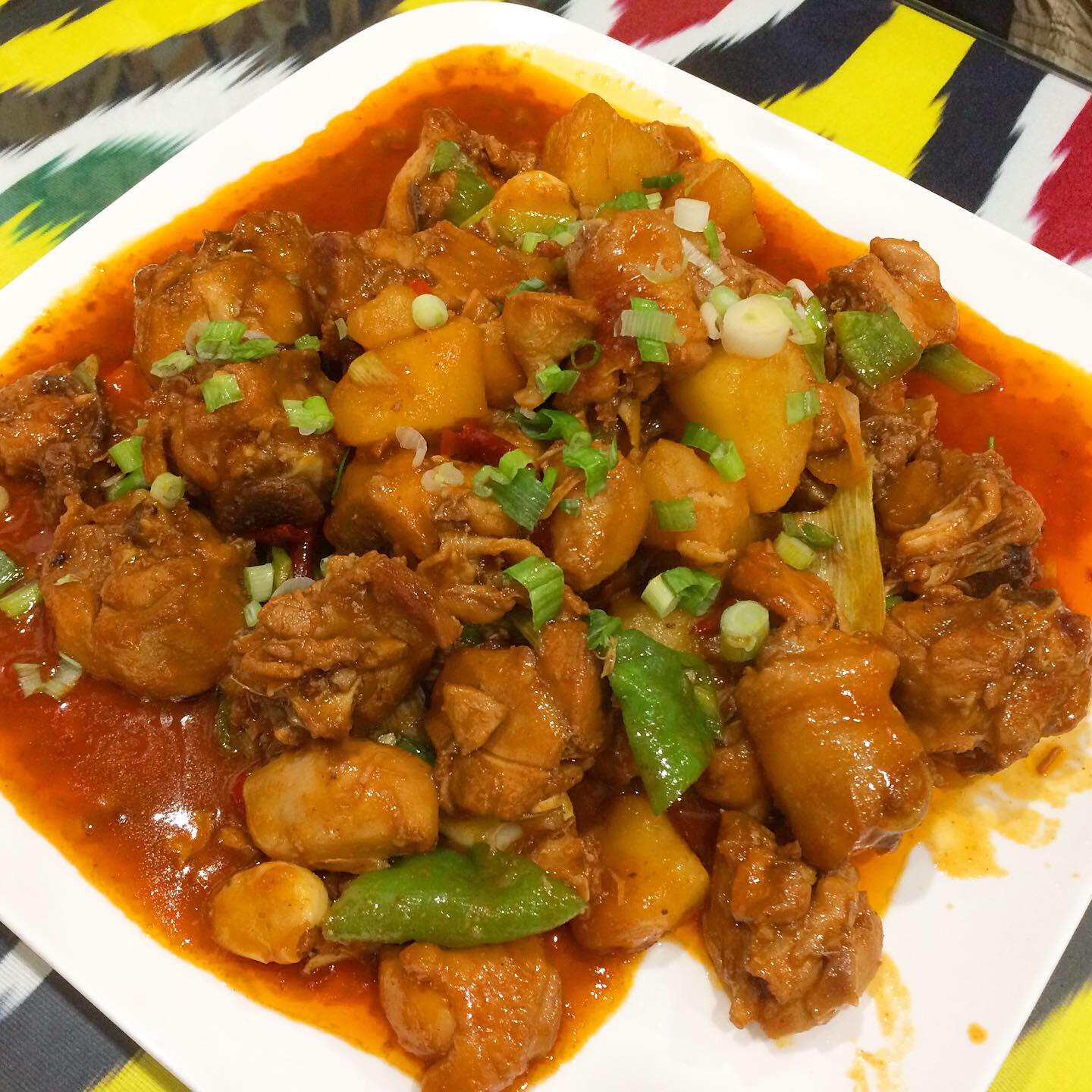 Dapanji, literally “big plate chicken” in Chinese, originated in Xinjiang, China and became popular there only about 25 years ago. This rich stew boasts flavorful and incredibly tender chicken and gets its heat from both dried red pepper and spicy long green pepper. It’s loaded with potatoes, of course, but it’s nothing without… 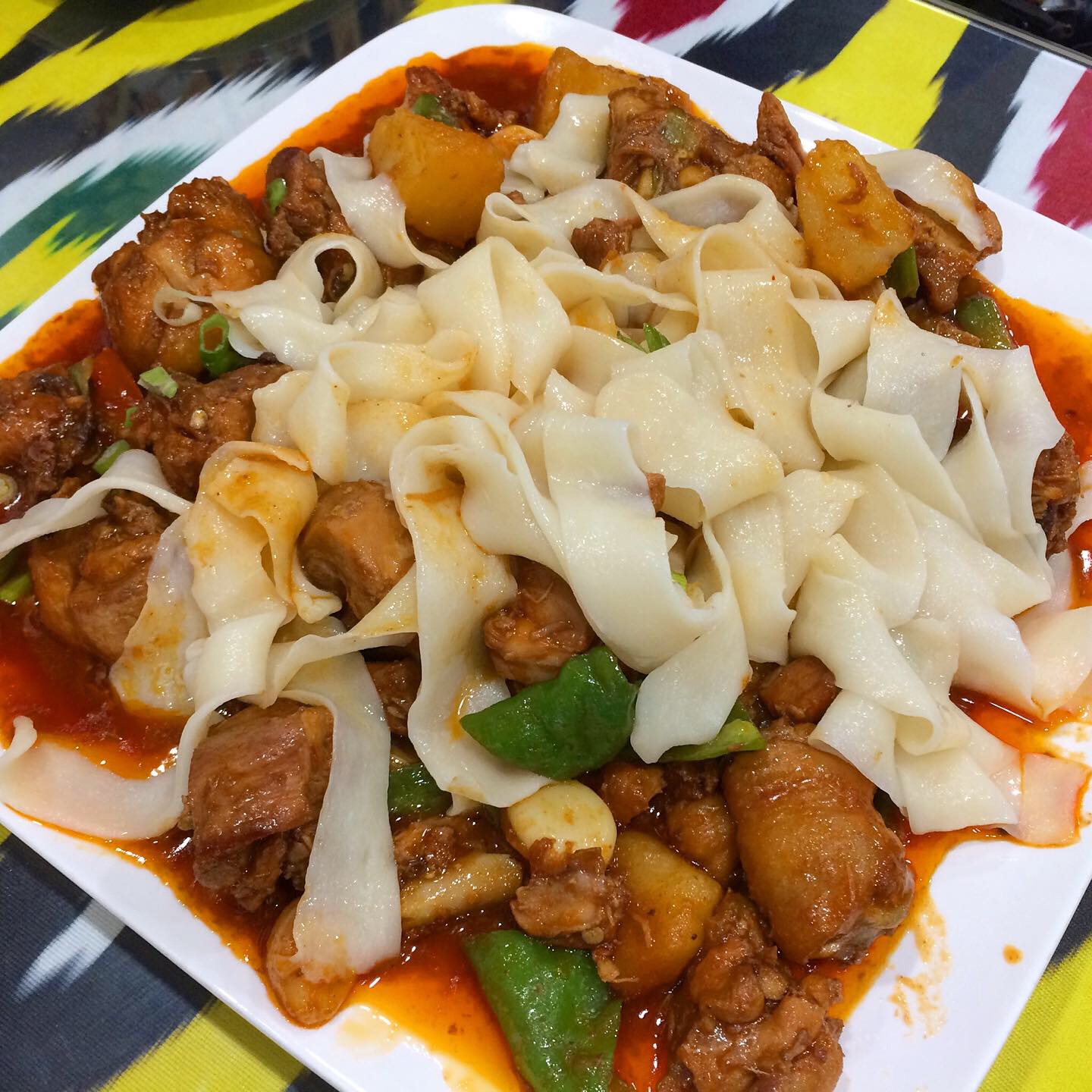 A great pile of noodles! 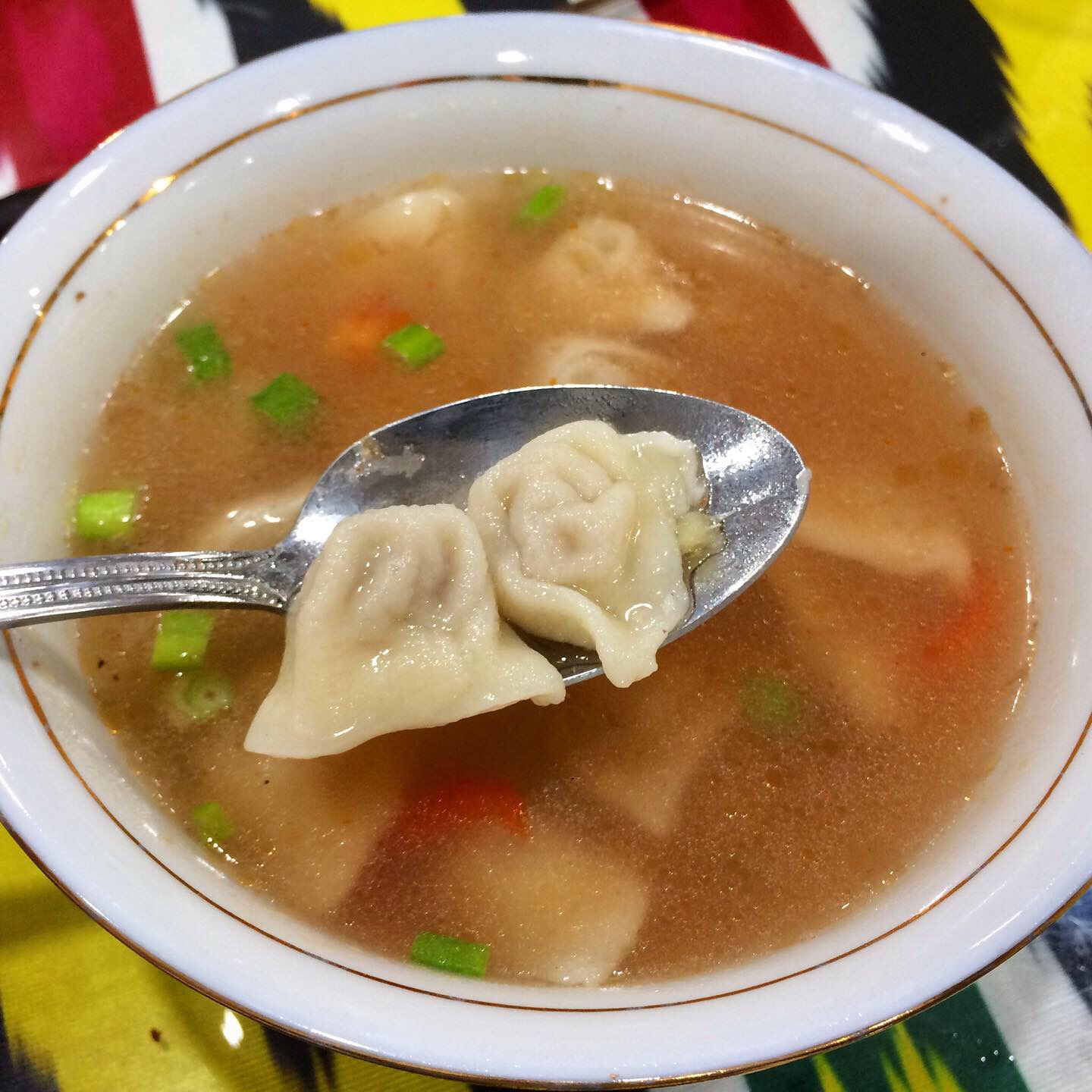 The menu calls it Ravioli, the Chinese characters for wonton, 馄饨, were there too, but do as I didn’t and heed the photo: it’s a soup. I didn’t ask about specifics or the bit of writing (looked like چـۈچـۈرہ – Uyghur alphabet, based on Arabic) over the picture so I need to go back. (As if I needed an excuse! 😉)