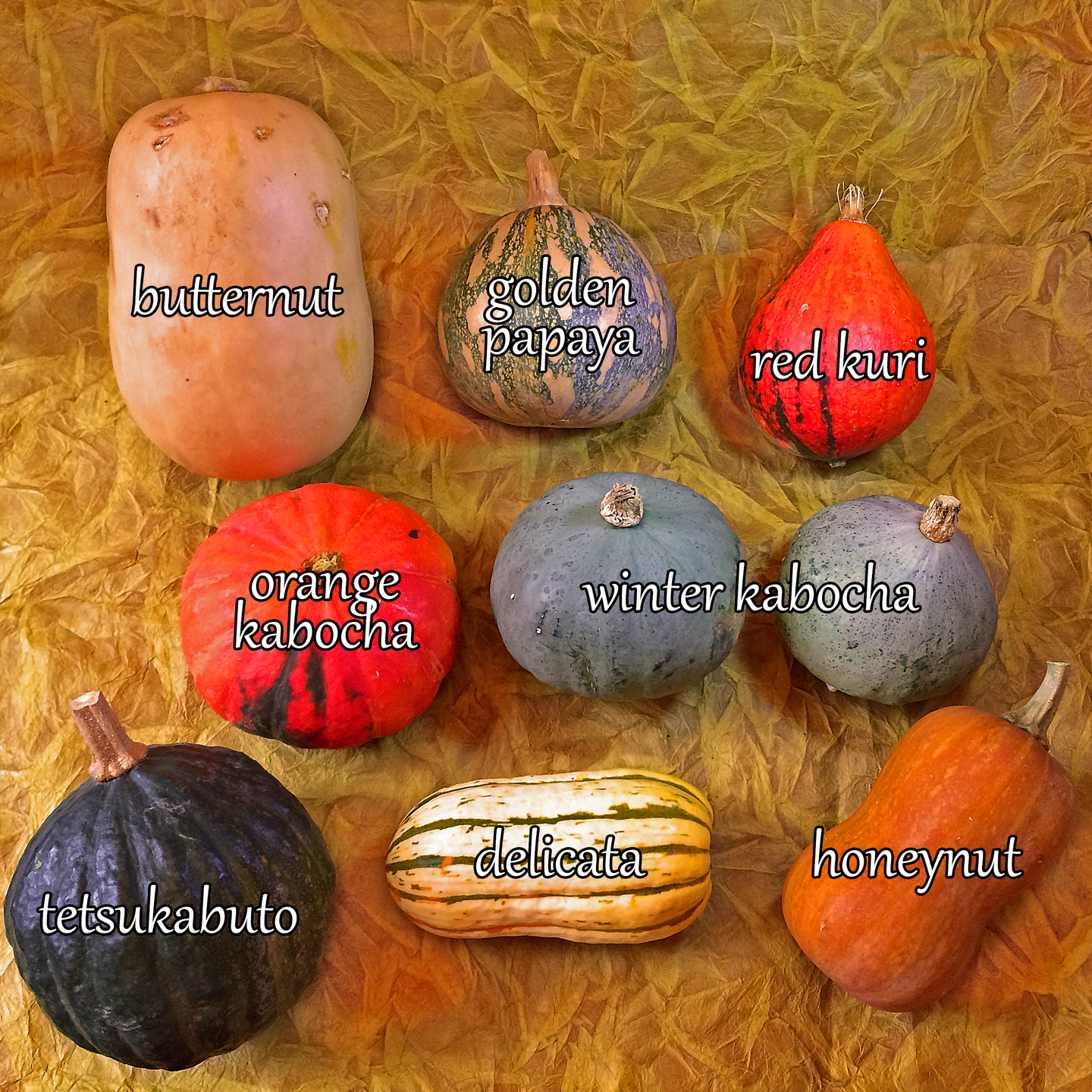 A few words that apply universally to these beauties before we get too deep into the weeds (so to speak):

Winter squash represent one-third of the agricultural trio known as the Three Sisters, life-sustaining crops planted ensemble by the indigenous people of North America, the other two siblings being maize (corn) and climbing beans. Despite their radically different appearances and flavor profiles, winter squash are all members of the same genus, Cucurbita (Latin for gourd), native to Mesoamerica and the Andes. Of the five species that are cultivated throughout the world, three are well represented in our marketplaces around these parts: C. maxima (which includes buttercup, kabocha, and red kuri), C. pepo (which includes acorn and delicata squashes along with pumpkin and most summer squashes), and C. moschata (which includes butternut and autumn frost varieties). If you’re attempting to tease out and unravel common threads based on appearance, flavor or texture, it’s a fruitless task (even though they’re fruits, not vegetables), so go back to work solving your four dimensional Rubik’s Cube – trust me, it’s easier.

Winter squash are harvested in late summer through autumn as opposed to the fecund summer squash that flourish during the warmer months – as any generous gardener who may visit you will make evident over armfuls of them. Unlike their summer cousins, their thick skin facilitates fairly long term storage at home in a cool, dry place – which raises the question, can you eat the skin? Depends on whom you ask. (And that caveat will apply repeatedly throughout this discourse.) For example, regarding acorn squash, one highly respected writer (who shall remain nameless) asserts that “the peel is not edible” while another vaunted resource (also to remain nameless) states that “it is most often prepared with its skin on as the skin is edible when cooked”. IMO, for most winter squash, if the skin is thin enough and it looks appetizing, chomp away, but personally, I don’t find any appeal in a peel when the flavorful flesh is the reason for consuming them in the first place – and I won’t miss the roughage.

Most winter squash are well suited to roasting, baking, stuffing, broiling, sautéing, steaming, and grilling, but that’s another area where the experts clash, singling out recommended methods of preparation for each variety that differ from one Cucurbita cuckoo to the next. I tend to favor dry heat (roasting, for example) because it concentrates the flavor of the flesh, but it varies with the recipe, not the squash. For example, roasted or baked kabocha is outstanding, but when it’s simmered in a dish like kabocha no nimono (more about that later), it’s every bit as delicious. My advice is to find a recipe that looks yummy to you and use that as a launching point.

Populating a continuum of textures from dry and satiny-smooth to moist and squishy-pulpy, winter squash are incredibly versatile performers. They can take the lead in a main dish, share the spotlight as a side, rock a supporting role puréed into a sauce or stew, they play well with others in a mélange, and as a matter of course can run the gamut from savory appetizers like soup to sweet desserts like pie; even the seeds can be roasted as a snack: “everything from soup to nuts” as my satiated grandfather intoned unfailingly, patting his bulging belly after every Thanksgiving dinner when I was a kid.

Enough obligatory preamble. If you’re wondering about which varieties of squash will be highlighted in this series, here’s the list in the order of publication (they’ll link as I post them):

(For those who are just joining us, the saga begins here.)