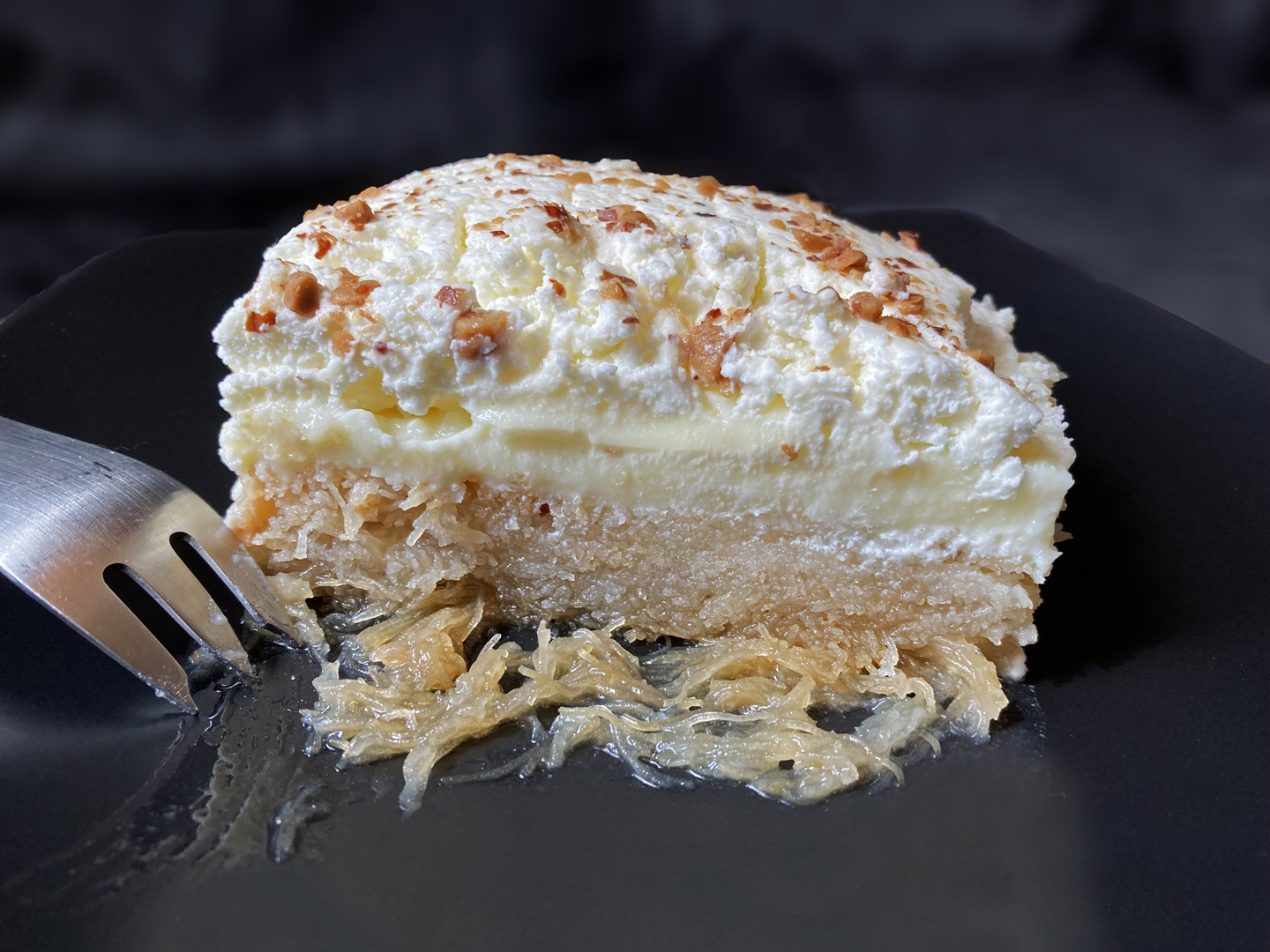 The Greek version (shown here) starts with a layer of crispy baked shredded dough that’s saturated in sweet syrup then topped with rich, dense custard and crowned with kaymak (clotted cream) or whipped cream and a scattering of chopped nuts.

In Turkey, the base is bread pudding (ekmek means bread in Turkish) soaked in syrup and finished off with kaimak.

This irresistible indulgence came from Greek Bakaliko, 7615 5th Ave, in Bay Ridge, Brooklyn and yes, it’s one of the stops on my Flavors of Little Levant and Little Yemen ethnojunket.

You know you wanna. 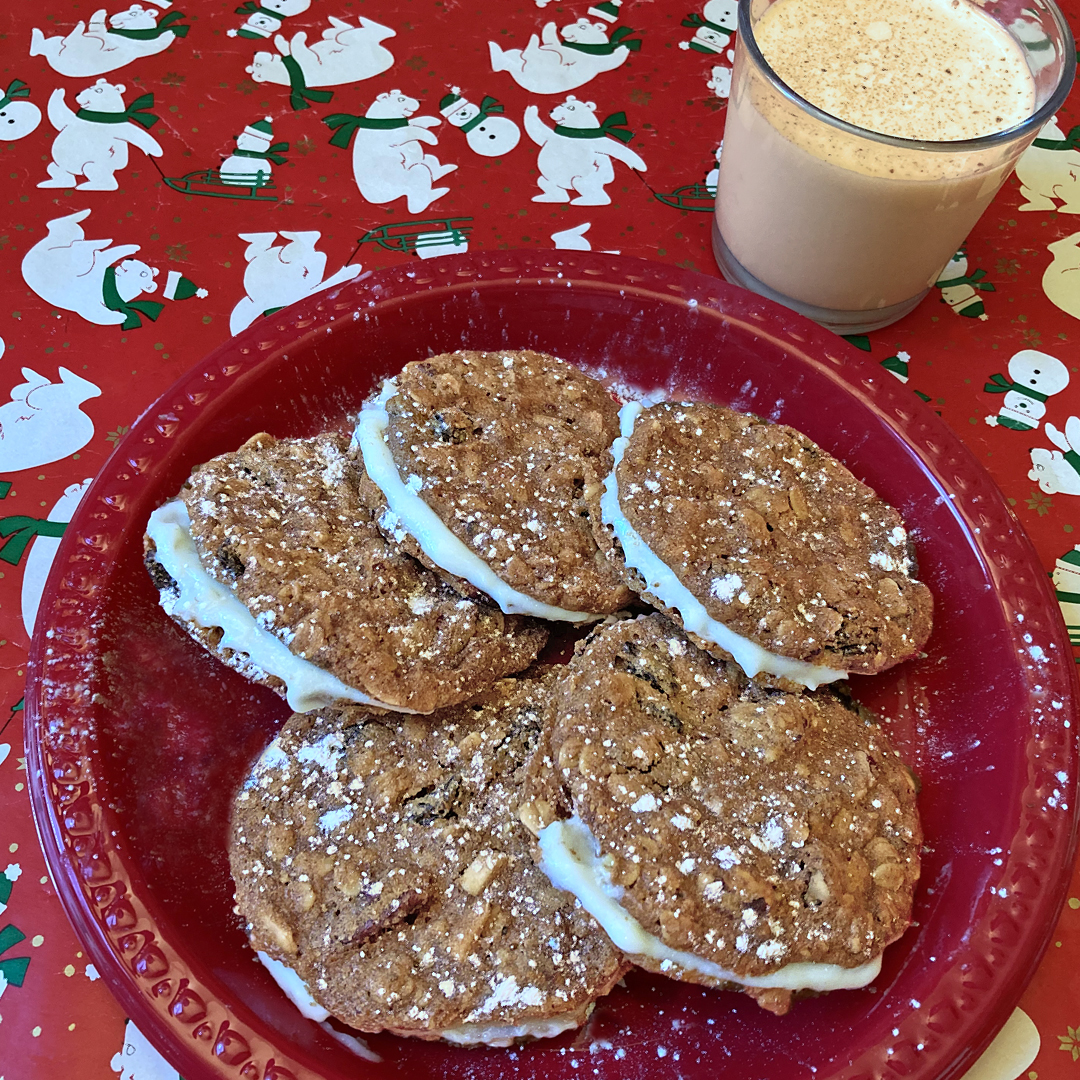 When developing a recipe, I often set out by studying a collection of existing recipes in order to generate an amalgam of sorts before I forge ahead in my own deviant direction.

So I developed my own bespoke recipe – which happily turned out to be first-rate – but since I’m a lily-gilder by nature I decided to elevate it by sandwiching cannoli filling between cookie pairs.

If I do say so myself, I may very well have come up with another entry for the holiday repertoire!

(I would have taken a better photo, but all the cookies mysteriously disappeared before I had the chance. Elves maybe?) 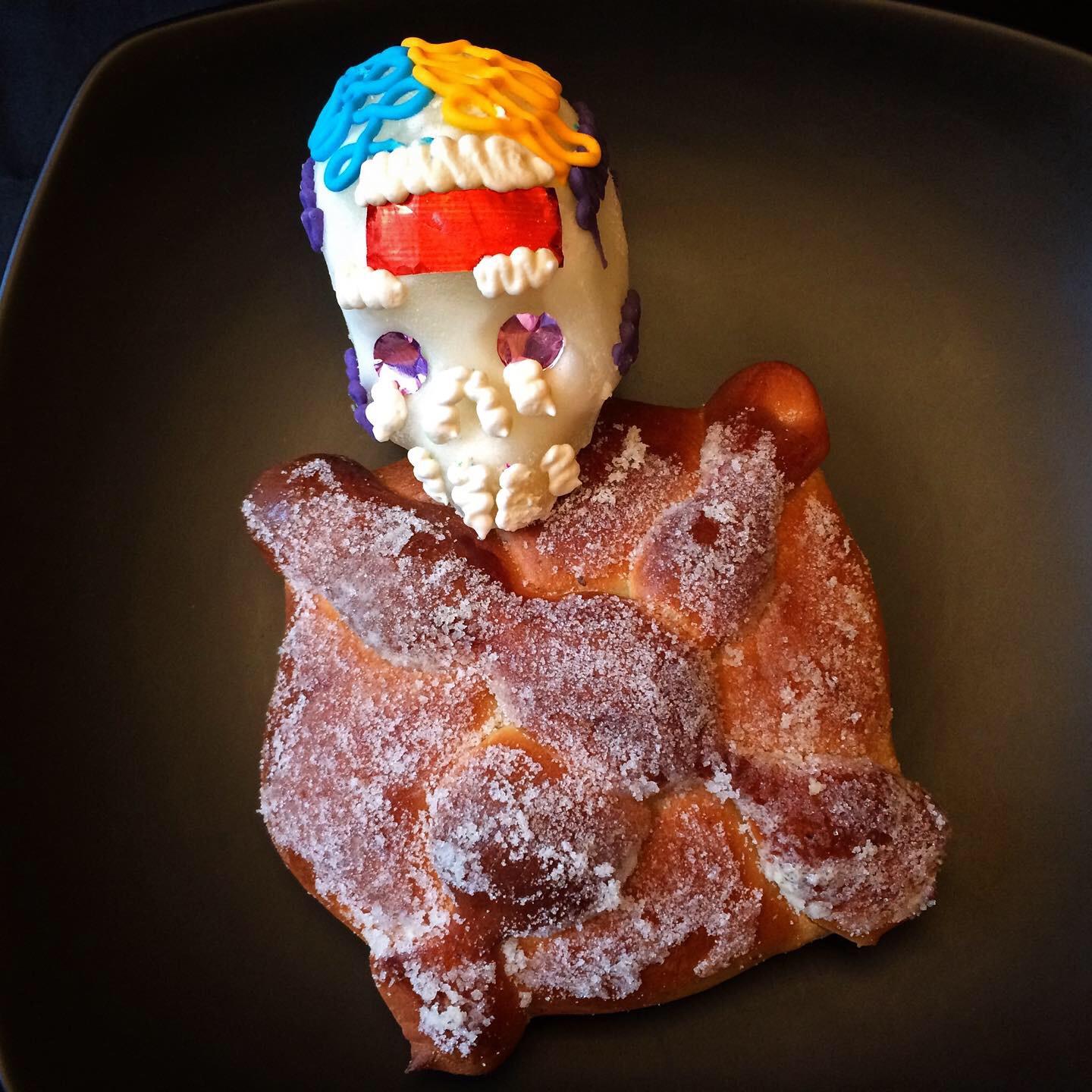 Wrong. Día de los Muertos is decidedly not Mexican Halloween any more than Chanukah is Jewish Christmas – and if any unenlightened soul tries to tell you that, please disabuse them of that fallacious notion inmediatamente!

The Mexican holiday, Day of the Dead, is celebrated from October 31 through November 2 (dates may vary depending upon the locality) – and “celebrated” is the proper word: families congregate to memorialize loved ones who have passed away, but it is seen as a time when the departed temporarily revivify and join in the revelry rather than as a sorrowful occasion. Additionally, these days Día de Muertos, as it is also known, serves as a paean to the indigenous people with whom it originated in pre-Hispanic times.

In the year 1 BC (Before Covid), I headed out to Sunset Park, Brooklyn, to get myself into the Día de los Muertos spirit. Sequin-eyed, neon icing-coiffed calaveras (sugar skulls) are relatively easy to find in the neighborhood; this one came from Panadería La Espiga Real, 5717 5th Avenue. Although spirits don’t eat, this one seemed particularly interested in the pan de muerto I picked up at La Flor de Izucar, 4021 5th Avenue.

This bread of the dead is customarily embossed with bone shapes, sometimes crossbones, sometimes in a circle, and other traditional embellishments such as skulls and a single teardrop. It’s a barely sweet, simple bun (like so many Mexican panes dulces), light and airy with a tight crumb, and topped with sesame seeds or sugar (like this one) with hints of cinnamon, anise, and orange flower water. 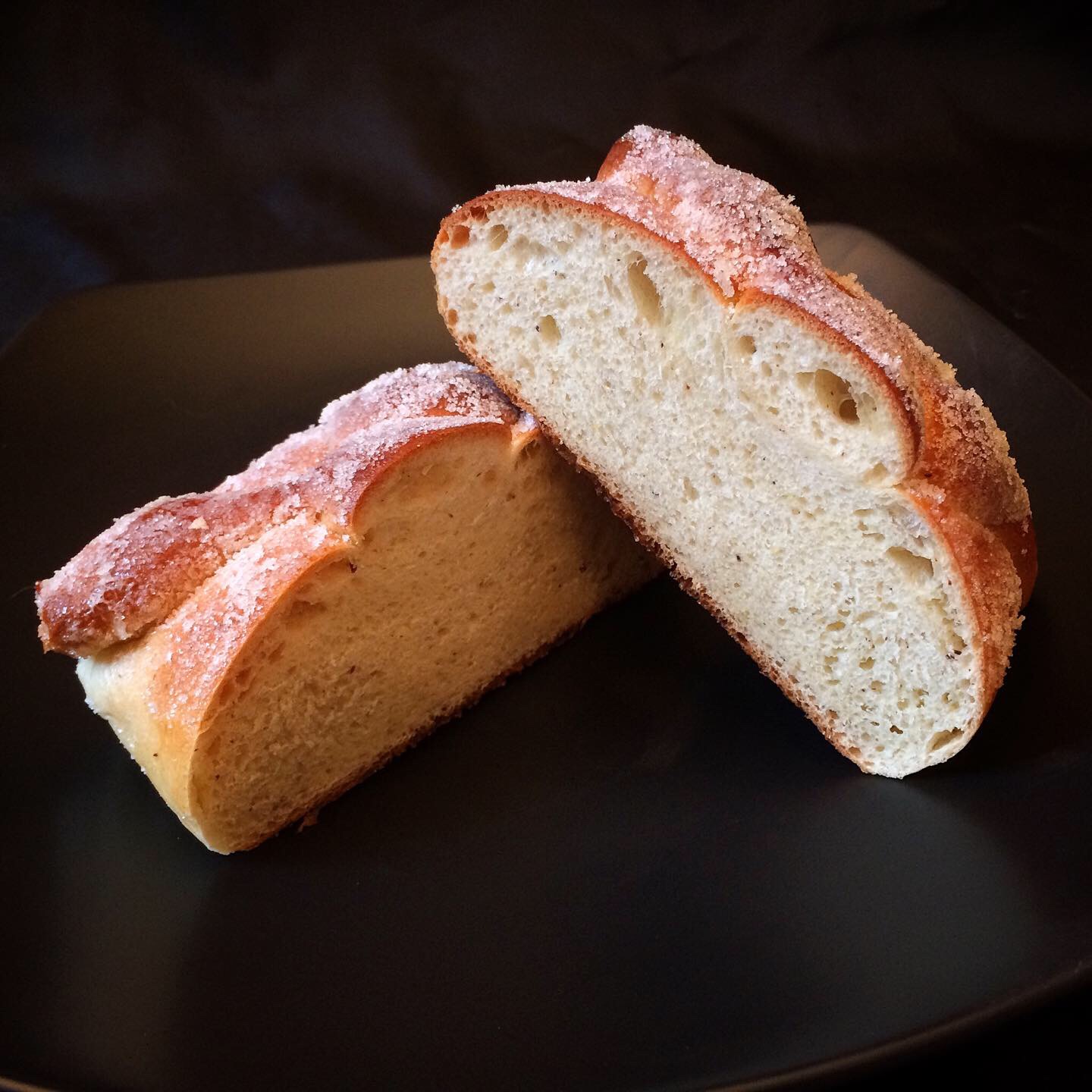 Above: A view of the inner sanctum. 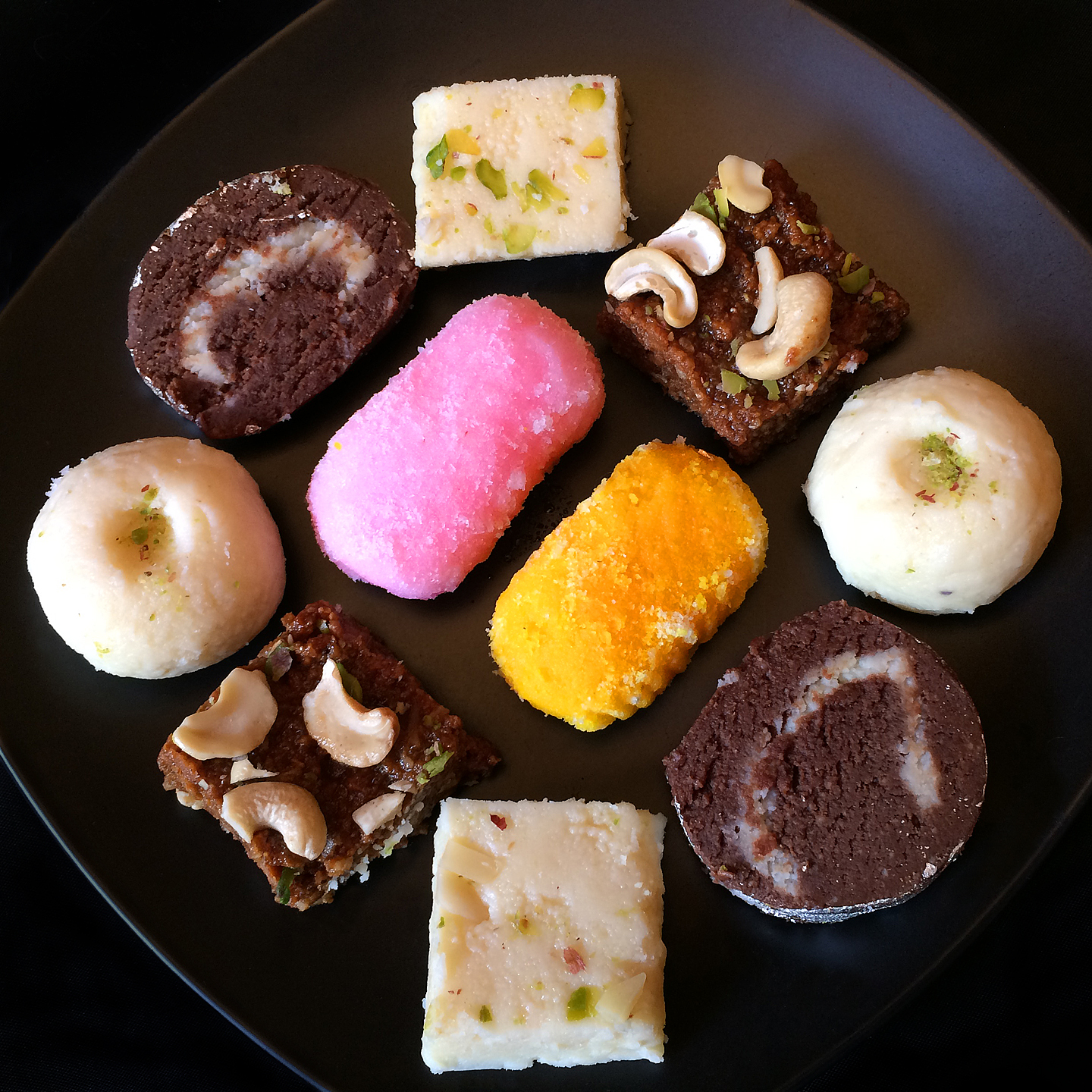 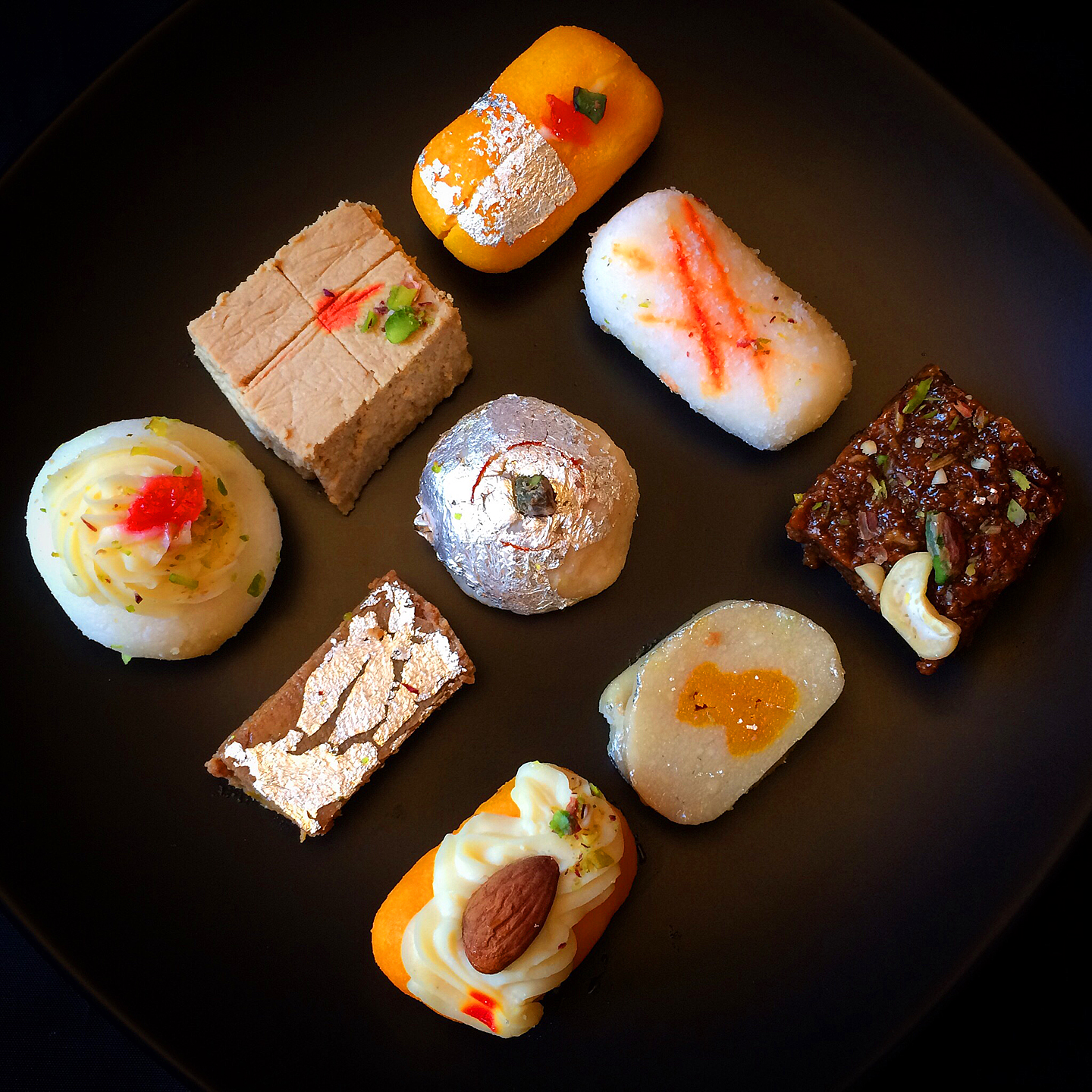 I can no longer keep this to myself. I am an addict, hooked on mithai. What’s that? You don’t know about mithai? Mithai are Indian sweets and since Diwali, the Hindu Festival of Lights, is upon us, I can think of no better time than now to tell you my tale. So gather round your diyas and check out my post “Indian Sweets 101: Meeting Mithai” right here on ethnojunkie.com! 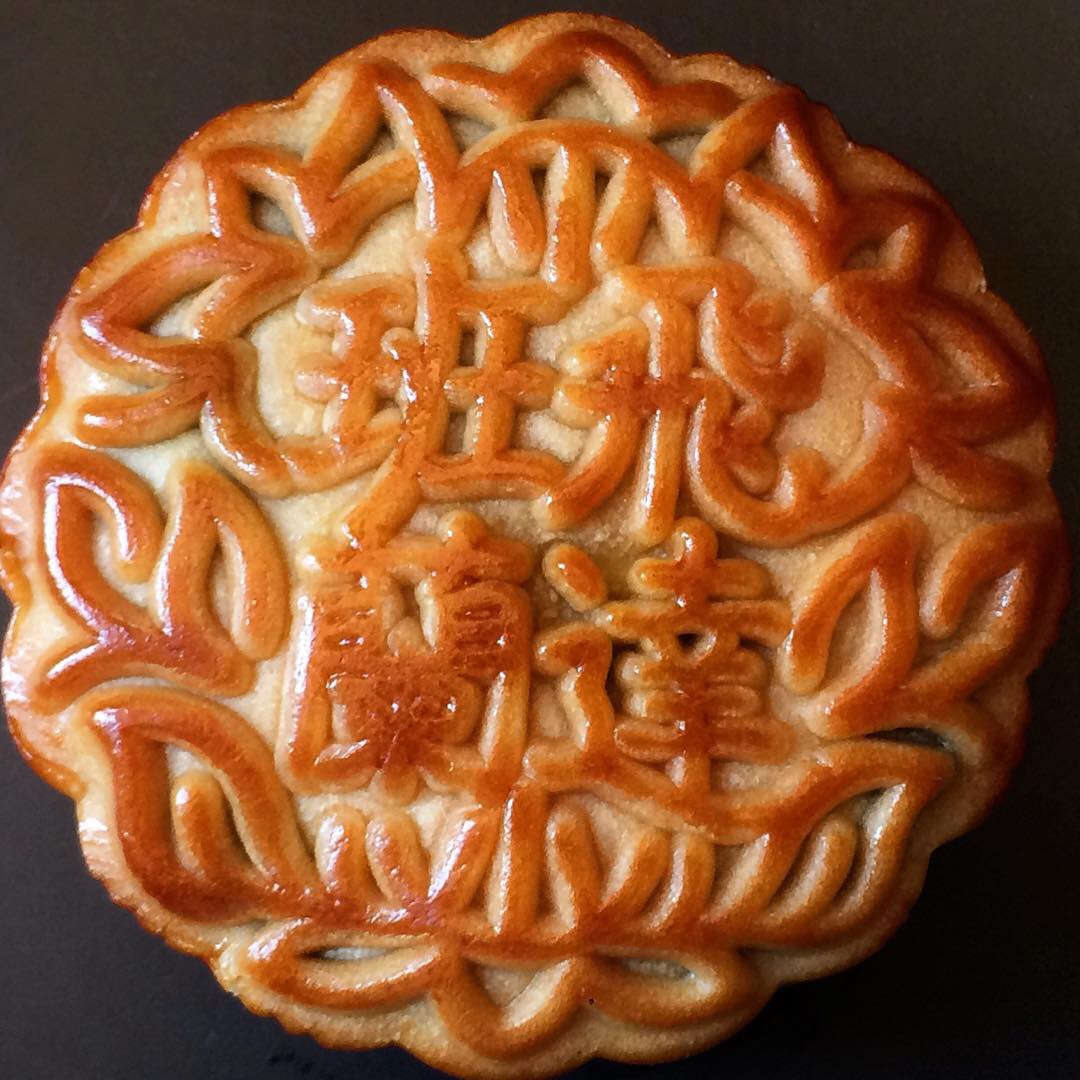 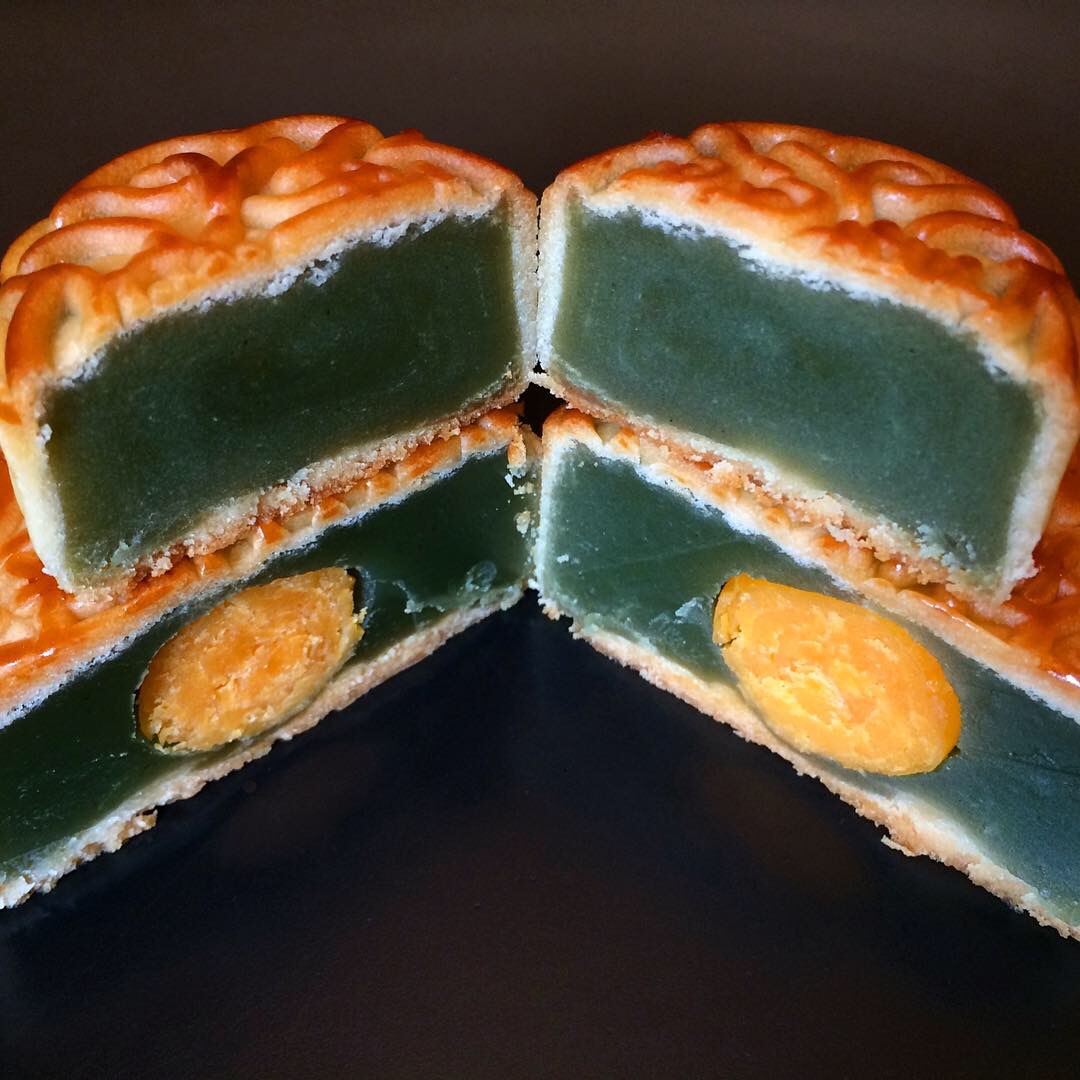 A visit to any Chinatown bakery this time of year will reveal a spectacular assemblage of mooncakes (月餅, yue bing) in a seemingly infinite variety of shapes, sizes, ornamentation, and fillings, all begging to be enjoyed in observance of the Mid-Autumn Festival, celebrated this year on September 10. Here are two pandan mooncakes, one with preserved egg yolk and a mini version without, from Chinatown’s Fay Da Bakery. 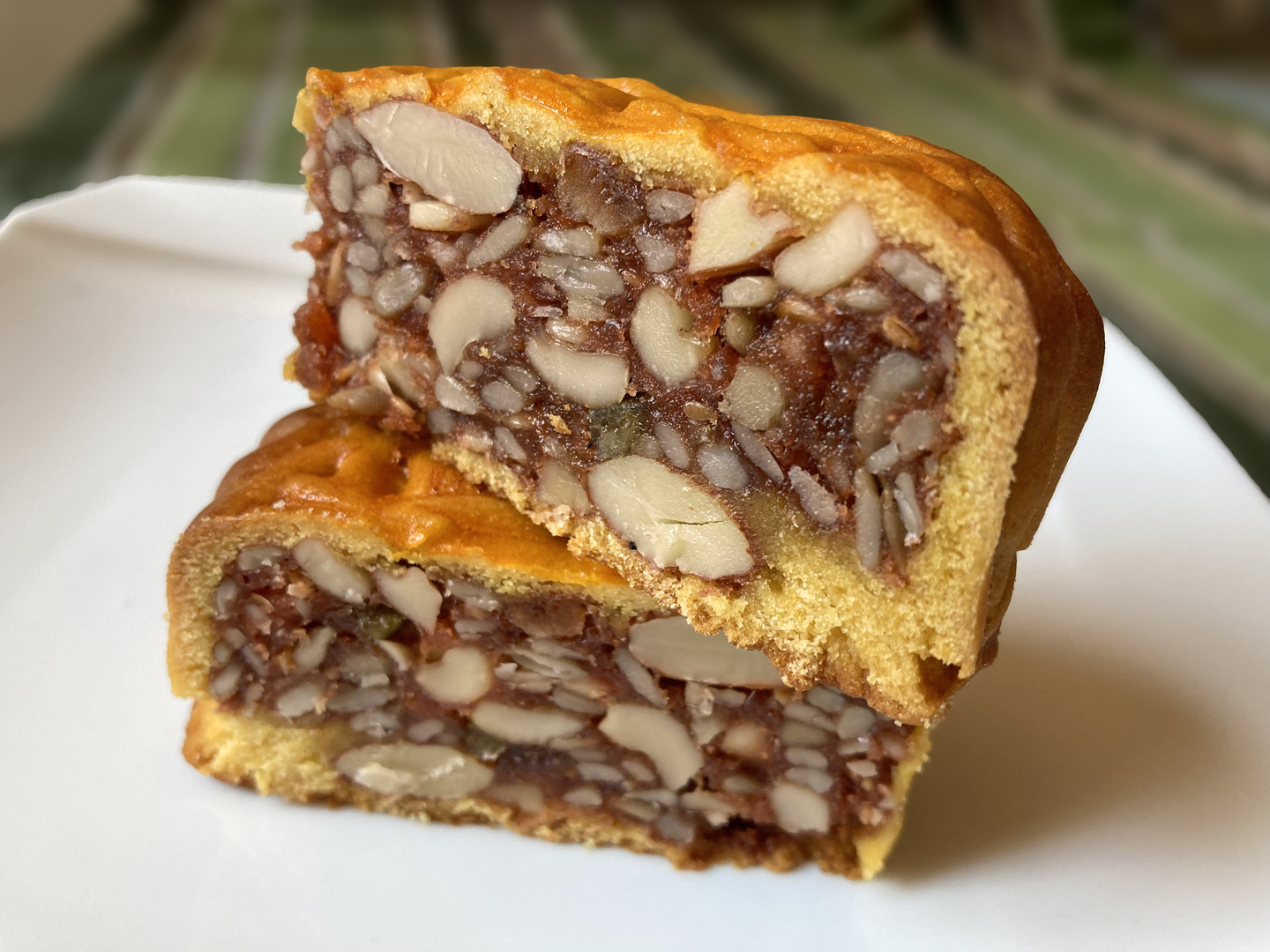 And here’s one of my favorites, Five Mix Nut Moon Cake, from Golden Fung Wong Bakery at 41 Mott St – one of the stops on my Manhattan Chinatown ethnojunket, of course!

Since 2022 is the Year of the Tiger, known for his bravery and adventurousness but also for his impulsive unpredictability, I decided to purchase an assortment of these delicacies even if I was unable to identify every single one of them in the bakeries in order to compare them and ultimately share them, virtually, with you.

For a deep dive into the holiday and these delicious treats, you can get the skinny – er, poor choice of words there – in my Chinese Mooncakes Demystified page detailing their similarities and differences in an attempt to shed some light (moonlight, of course) on their intricacies. 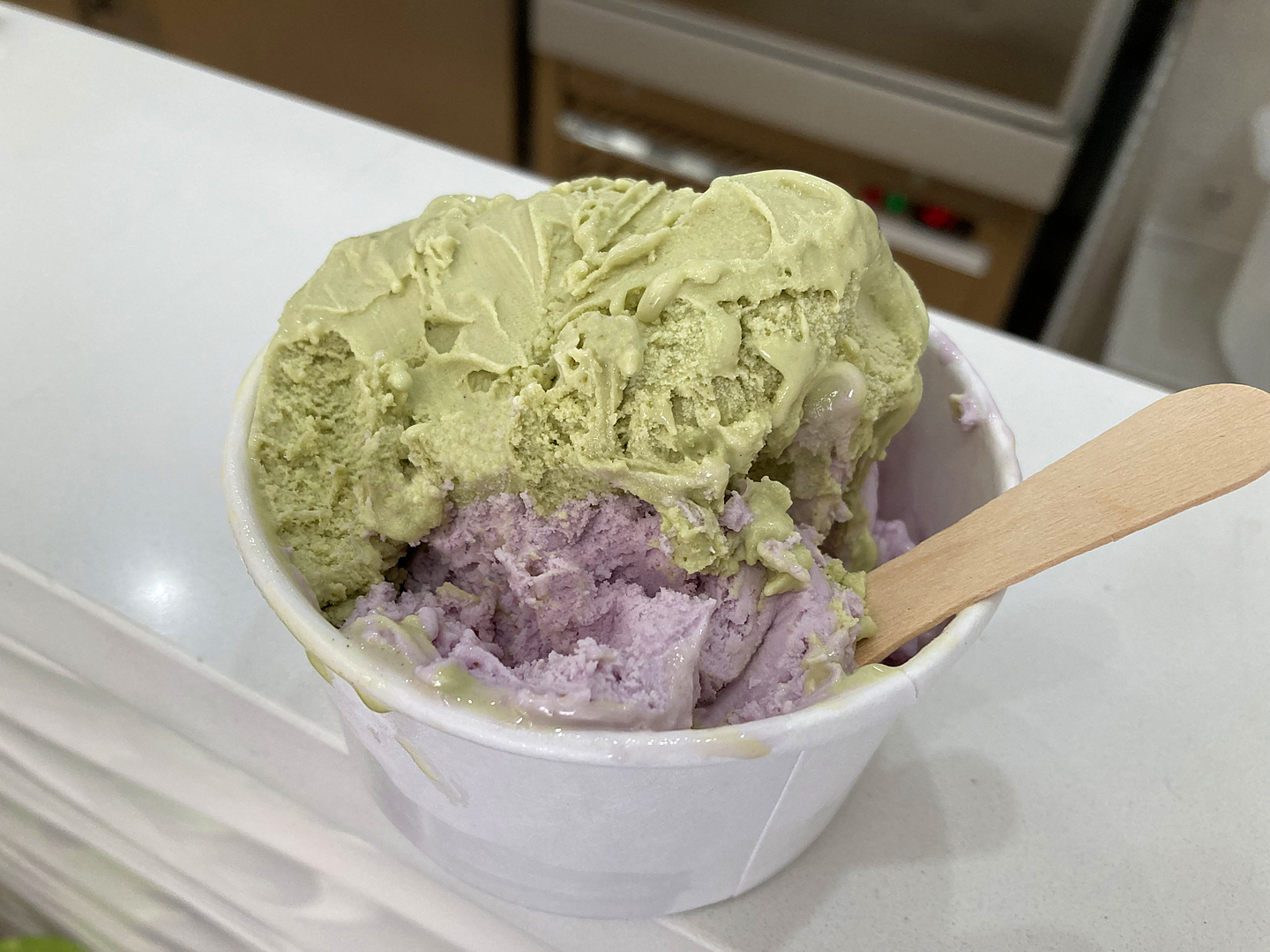 New kid on the block in Flushing with an assortment of flavors calculated to please everyone.

Oh wait – was I supposed to take a pic before I started eating? Dang!

Here’s my cup of Pistachio and Purple Yam & Taro – which was fuller when served. 😉

La Mira Gelateria is located at 133-35 Roosevelt Avenue in Queens.

About three years ago, I wrote about Happy Wheelie, purveyors of Taiwanese Wheel Cakes in Landmark Quest Mall, 136-21 Roosevelt Ave, Flushing. They no longer occupy that position, but Bearin Wheel Pie is currently filling the void. And speaking of fillings, Bearin’s selections include Red Bean, Cream, Matcha, Chocolate, Taro, Peanut, Black Sesame and more, along with some special creative combinations that range from savory to sweet. 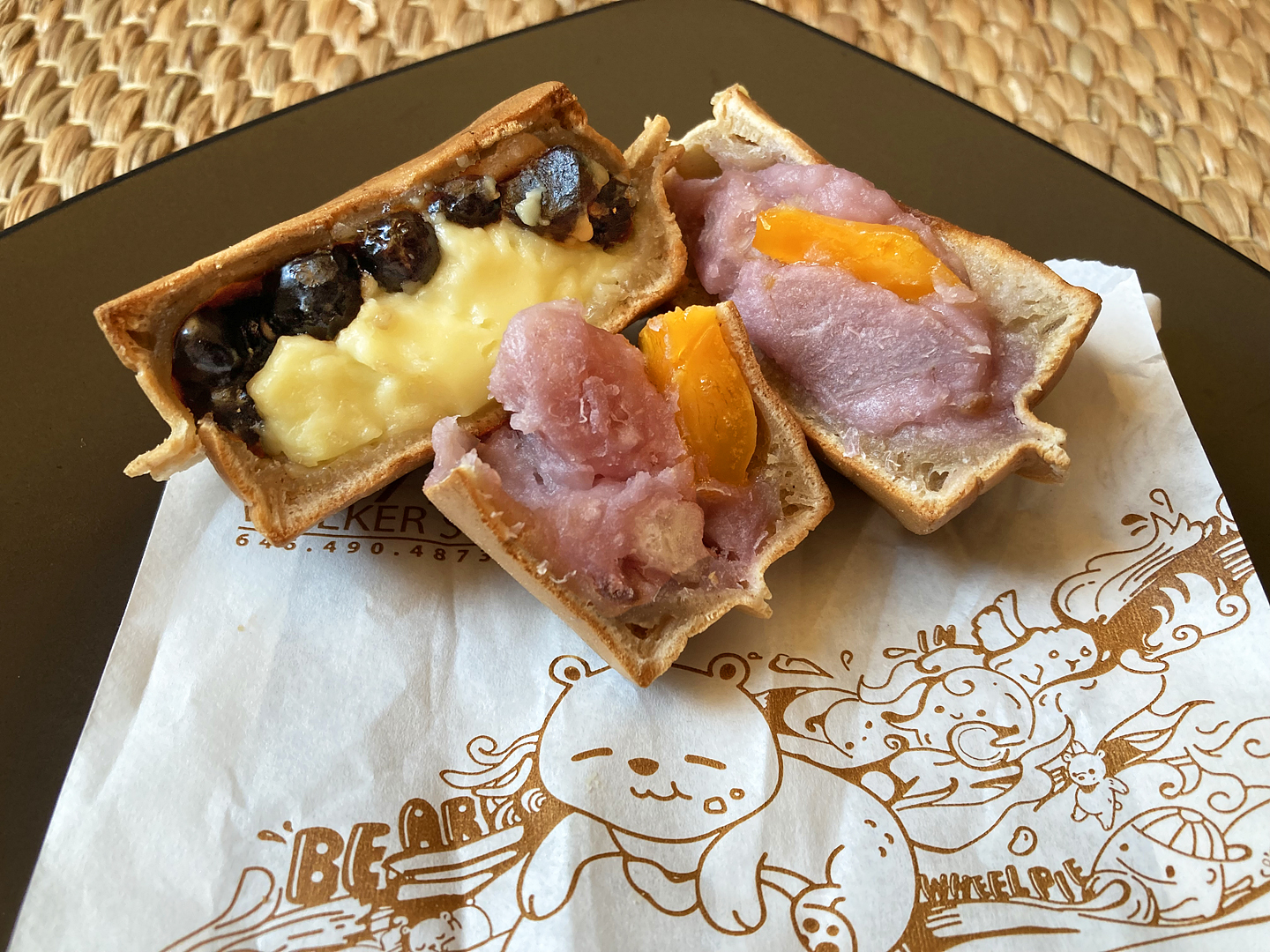 Shown here are Taro with Salted Egg Yolk representing Team Savory and Cream with Tapioca (i.e., custard with boba) playing for Team Sweet. Taro is the chameleon of the tuber/vegetable world running the flavor gamut from savory to sweet; here, Chinese preserved duck egg yolks intensify the flavor. Regarding its neighbor to the left, the hot custard is sweet but not too sweet (I know how important that is to some of you 😉) and the boba provide a welcome textural contrast. 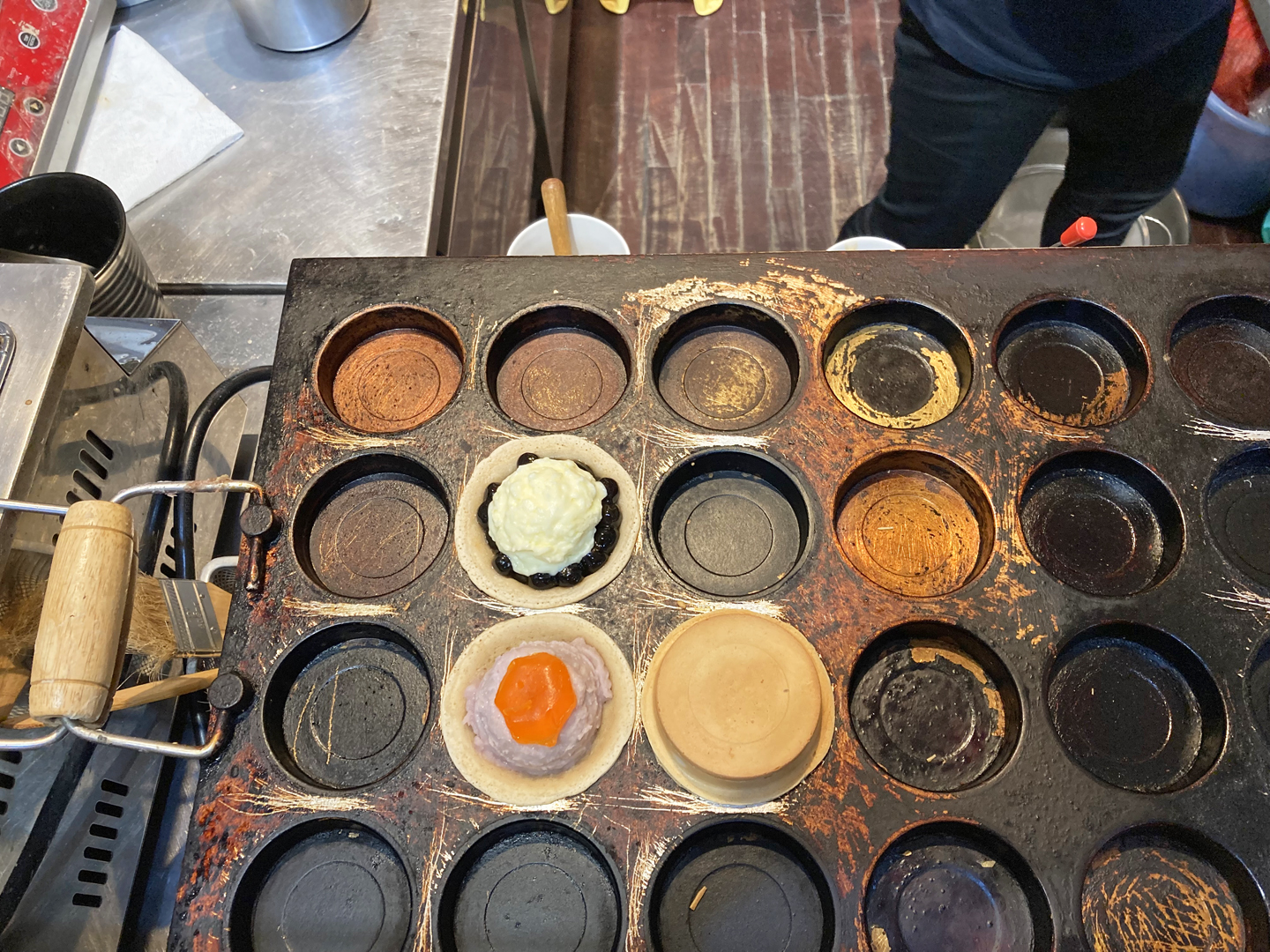 Using a modest batter and a variety of fillings, they’re prepared in this custom apparatus whose roots are in Japan’s Imagawayaki (今川焼き) where they’re often filled with adzuki bean paste; the experience is as much about watching the process of making these traditional Taiwanese treats as it is about eating them. The batter for the bottom half is stirred gently so it rises up the sides, then the filling is added; the top is made similarly. As with any art form, the technique is a little difficult to describe, so I guess you’ll just have to come with me on my Flushing ethnojunket to see how it’s done!

To learn more about my food tours, please check out my Ethnojunkets page and sign up to join in the fun! 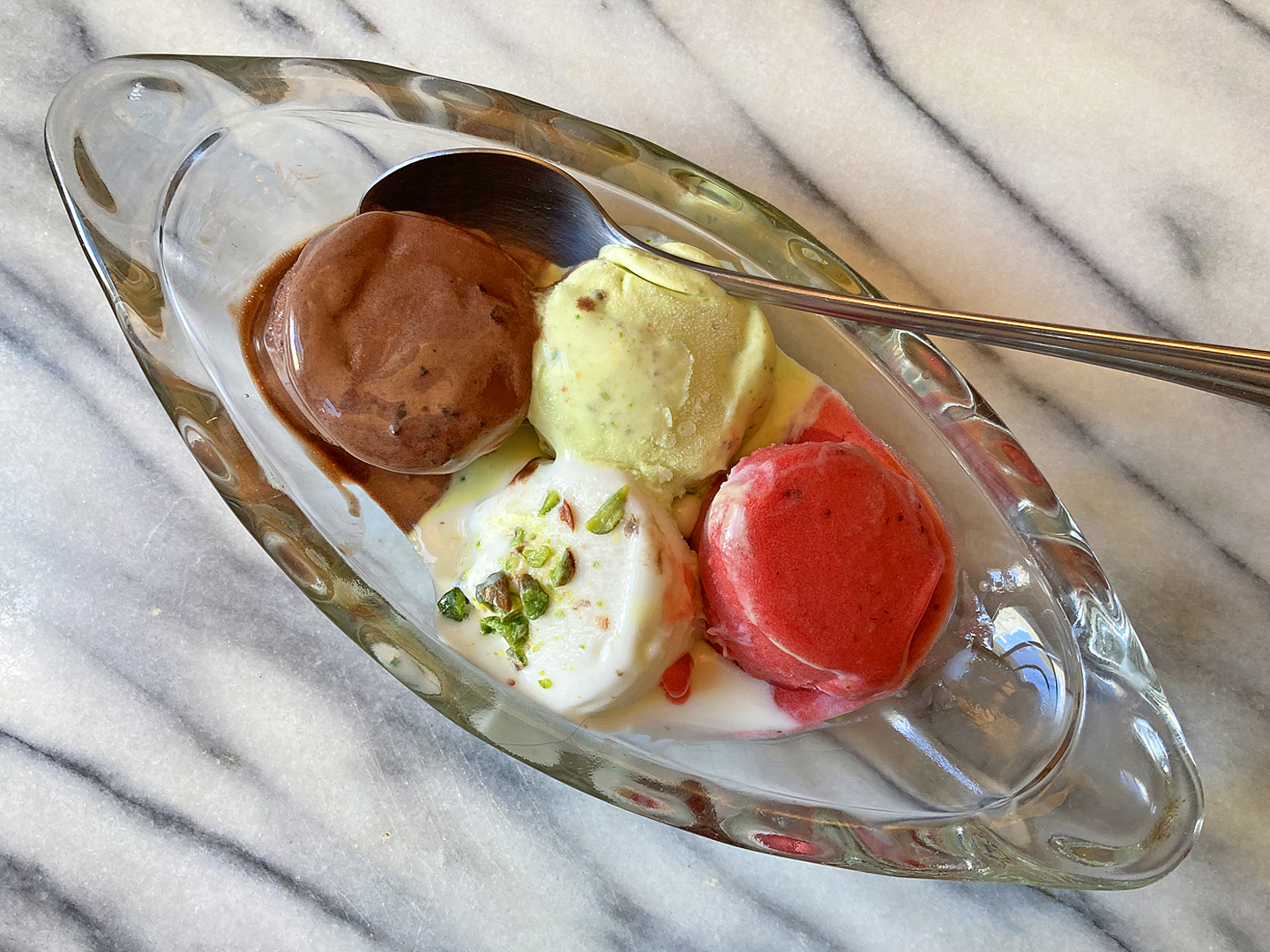 On my Bay Ridge food tour, The Flavors of Little Levant and Little Yemen, we visit a few of its opulent sweet shops, some of which feature mastic ice cream. Booza hails from the Levant and Egypt and is known for two qualities, its stretchy consistency and its ability to resist melting; Turkish dondurma and Greece’s kaimaki are its somewhat less sticky, somewhat more melty close cousins. 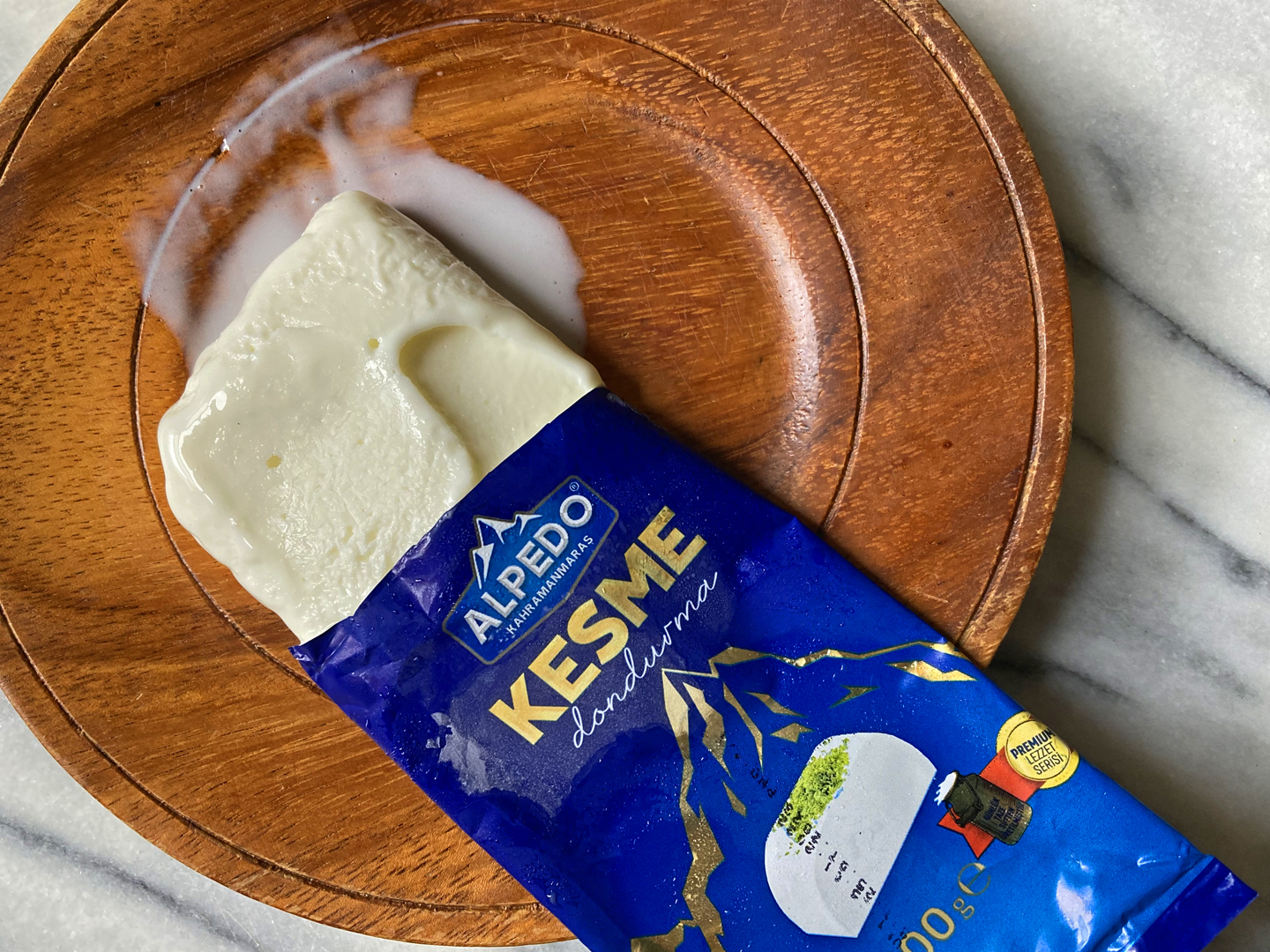 This is dondurma from Antepli Baklava, 7216 5th Ave, and they offer it in two forms: a squeeze up pouch… 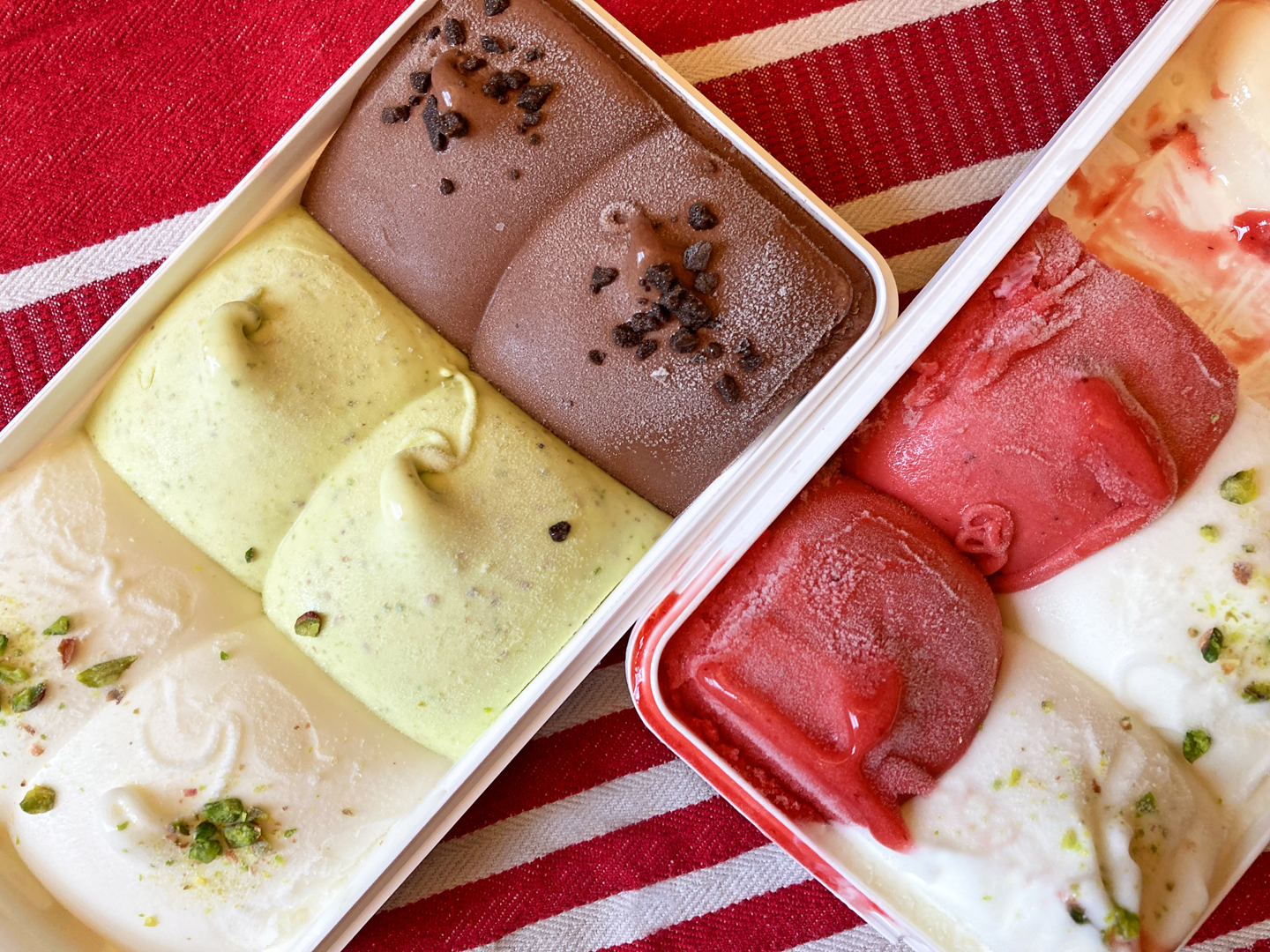 …and roughly pint-sized containers in çilek (strawberry), kakao (cocoa), fıstık (pistachio), and sade (plain) flavors. Needless to say, I’ve tried them all – in a quest to ferret out the best of the best, of course. 😉

So is this the magic mastic ice cream we’ll enjoy on our Bay Ridge ethnojunket? Only one way to find out: check out my Ethnojunkets page and sign up to join in the fun! 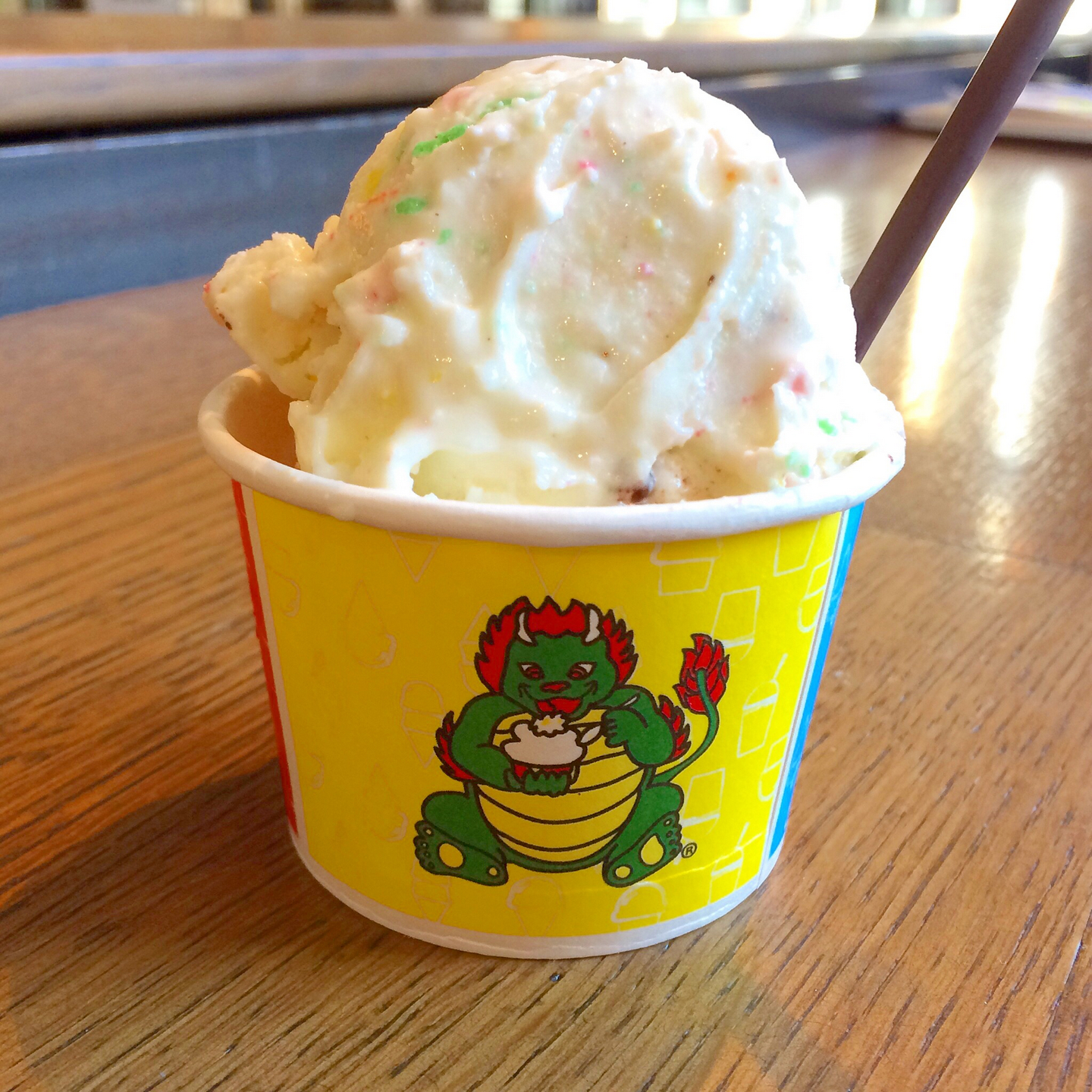 Every August, as a routinely flushed, overheated child, I would join in chorus with my perspiring cohorts, boisterously importuning, “I scream, you scream, we all scream for ice cream!” Little did I realize that rather than conjuring dessert, I was conjugating it and probably laying the groundwork for a lifetime of fascination with foreign languages and world food.

We lived in close proximity to one of the best dairies in town; it was known for its wide assortment of locally produced natural flavors, certainly sufficient in number and variety to satisfy any palate. Perhaps my obsession with offbeat ice cream flavors is rooted in my frustration with my father’s return home from work, invariably bearing the same kind of ice cream as the last time, Neapolitan. Neapolitan, again. My pleas to try a different flavor – just once? please? – consistently fell on deaf ears. “Neapolitan is chocolate, strawberry and vanilla. That’s three flavors right there. If you don’t want it, don’t eat it.” Some kids’ idea of rebellion involved smoking behind the garage; mine was to tuck into a bowl of Rum Raisin….

There’s lots more to the story, of course. Click here to get the full scoop! 🍨

I have to admit that it was a real treat to revisit my old haunts as part of revitalizing my ethnojunket, The Flavors of Little Levant and Little Yemen in Bay Ridge (read about my ethnojunkets here); the other part, of course, was tasting the goodies I had been missing during COVID isolation for the past many months. 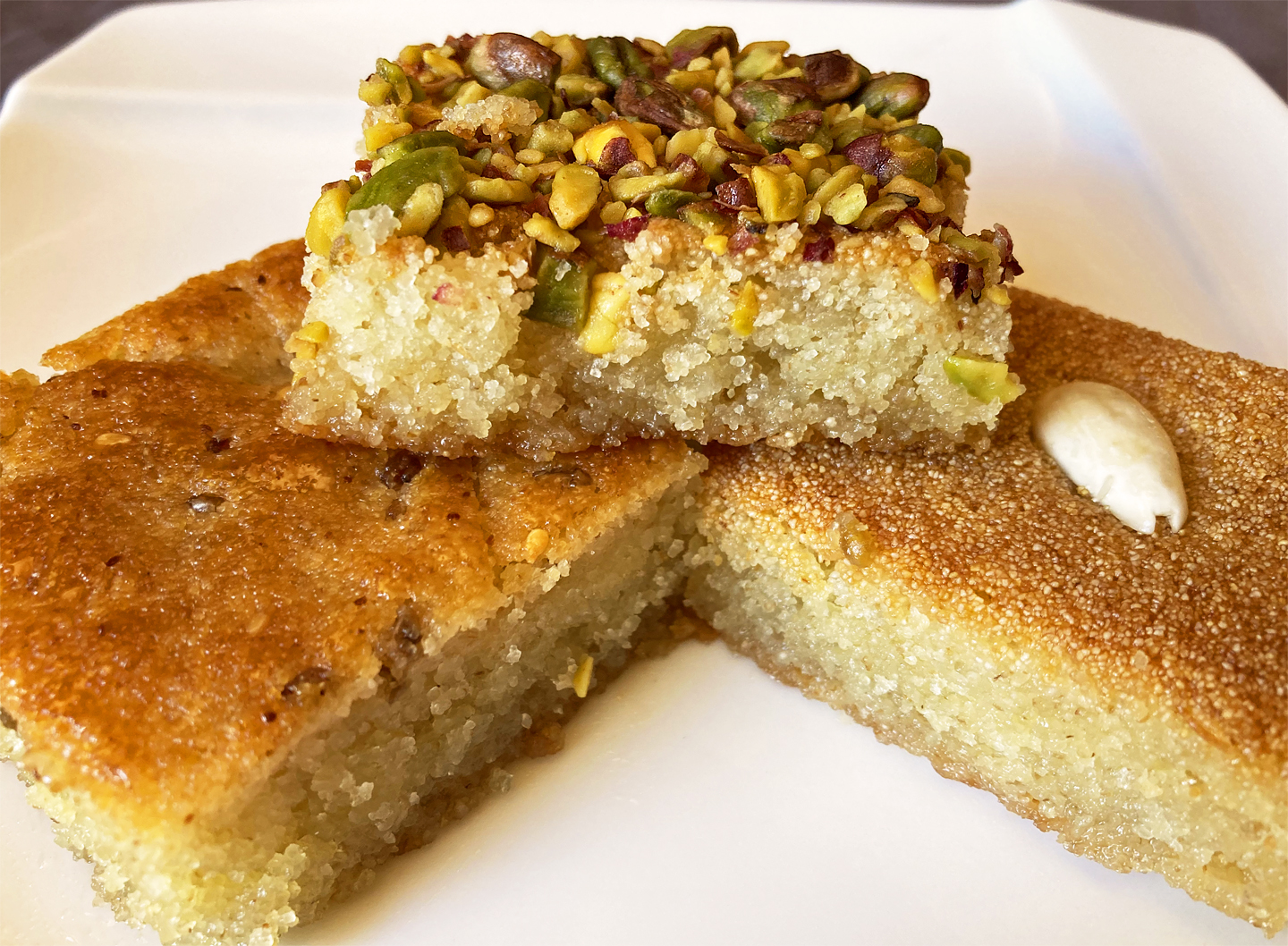 These dense, rich semolina squares came from Paradise Sweets, 6739 5th Ave, Brooklyn. The nomenclature can get a bit sticky (not unlike the orange blossom/rose-water sugar-syrupy Middle Eastern treats themselves): the pistachio nut laden delicacy perched on top was identified to me as Basbousa, the two supporting players as Harissa. The harissa dressed with an almond is the basic version, the other is shot through with crunchy, flavorful fenugreek seeds.

A limited amount of interweb research (hey, you try typing with sticky fingers and see how far you get) suggested that basbousa and harissa refer to the same dessert, the choice of noun reflecting where in the world you happen to be. So far, so good. But it seems that they’re also called namoura and revani. And then, naturally, there are the English orthographic variations (haresa, hareeseh, hareesa, harisah, ad infinitum – and those are just for harissa) and a few in Arabic as well.

Wikipedia teaches us: “Basbousa is the dessert’s Egyptian name and it is called the same in North Africa. It is often called ‘hareesa’ in the Levant, and also the Egyptian city of Alexandria, though in other parts of Egypt hareesa is a different type of dessert. Also note that ‘harissa’ in North Africa is a spicy red sauce.”

And as if that last bit weren’t enough, we should also take note of the dish harissa (aka jareesh), a porridge made from boiled cracked wheat, which itself is another name for the meatier halissa, halim or haleem, a fixture in Central Asian cuisine around Navruz (aka Nowruz elsewhere) which I wrote about here.

Right. Not confusing at all.

But what’s in a name? That which we call rose water by any other name would taste as sweet!