Part eight in a series of reports.

Some folks look forward to the annual celebration of their birthdays or anniversaries; for me it’s the occasion to cover America’s largest food and beverage trade show right here in New York City, Specialty Food Association’s Summer Fancy Food Show. (Check out full coverage and a description of a past event here.) Aside from the fact that it affords the chance to hob and nob with other professional foodies, see what products and brands are trending and poised to make a breakthrough, and get a sense of what the industry thinks the marketplace is craving, it gives me the opportunity to turn you on to new products to watch for locally or order online.

The 2020 FFS was, like almost everything else, canceled because of the pandemic, but the organization has announced a 2021 iteration of the event coming soon. At a previous show, I was introduced to Nature’s Charm canned Young Green Jackfruit Confit; in its yellow ripened form it’s one of my favorite fresh fruits, but the unripe green version also figures into a number of cuisines (particularly Southeast Asian) as a savory ingredient and is especially popular as a meat substitute among vegetarians and vegans. 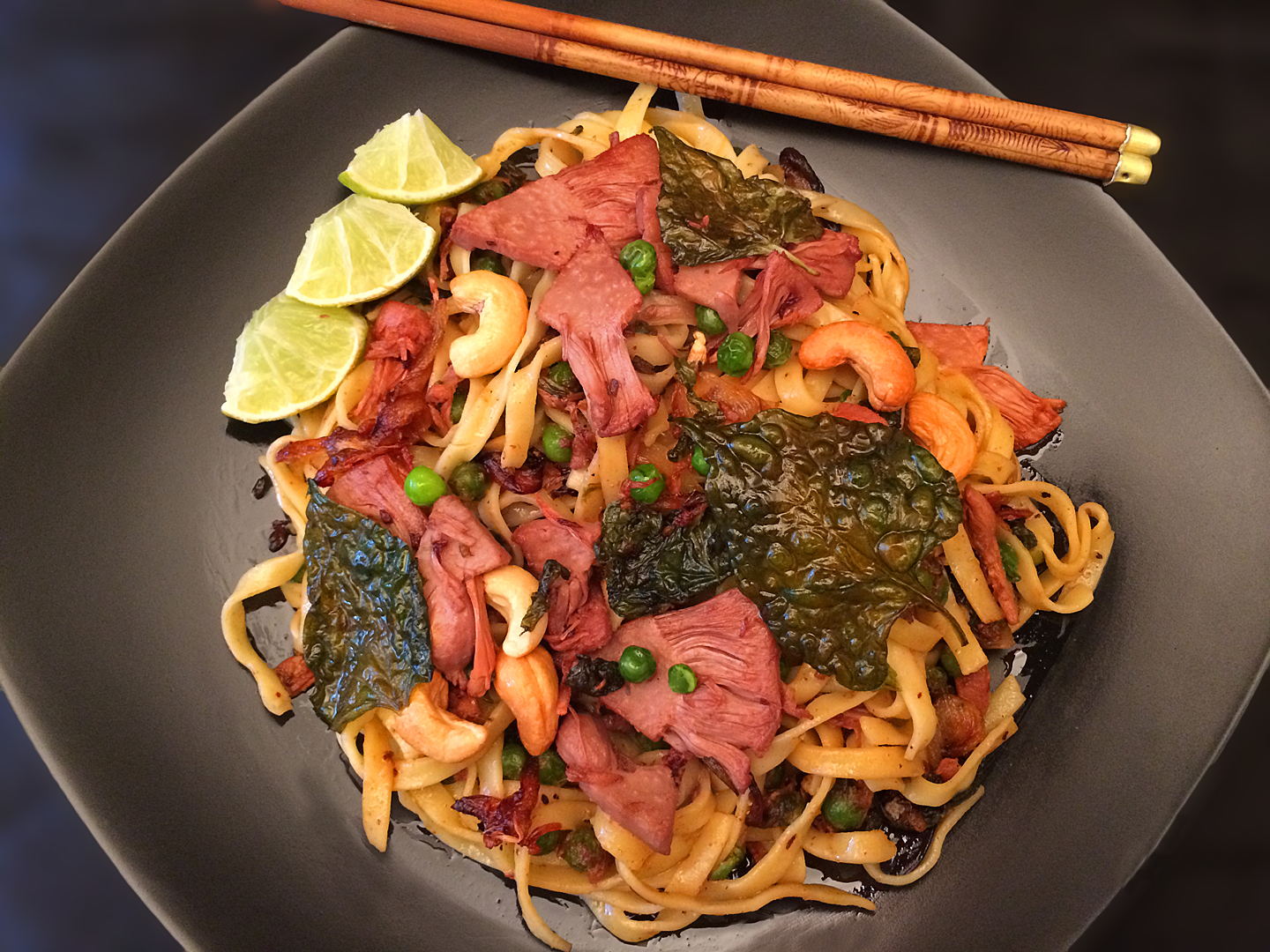 I used this confit variation in a stir-fry with fresh Chinese noodles, peas, and cashews. The dish started out with caramelized onions, shallots, pressed garlic and ginger plus a paste containing dried chilies, tomato paste, and a bit of coconut milk to loosen things up. The outlier ingredient was fish mint used two ways here: julienned and sautéed with the aromatics, and fried as a garnish. 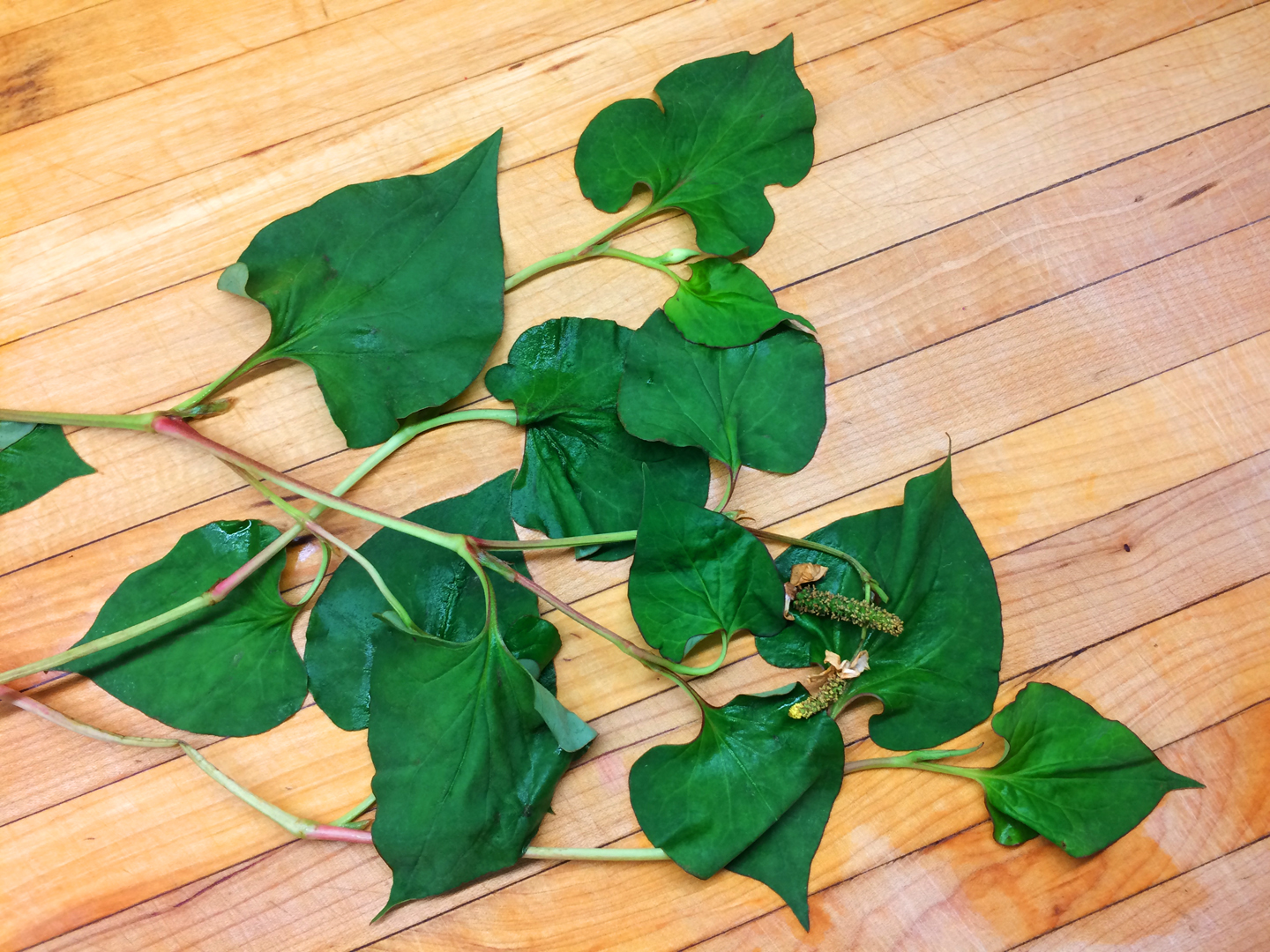 Fish mint (botanically, Houttuynia cordata) does have something of a vaguely fishy character, but that doesn’t really describe it precisely. Its common name is almost calculated to drive you away (like “mugwort”), even though it does have a toe dipped in accuracy. It’s also known as rainbow plant and chameleon plant. Better. 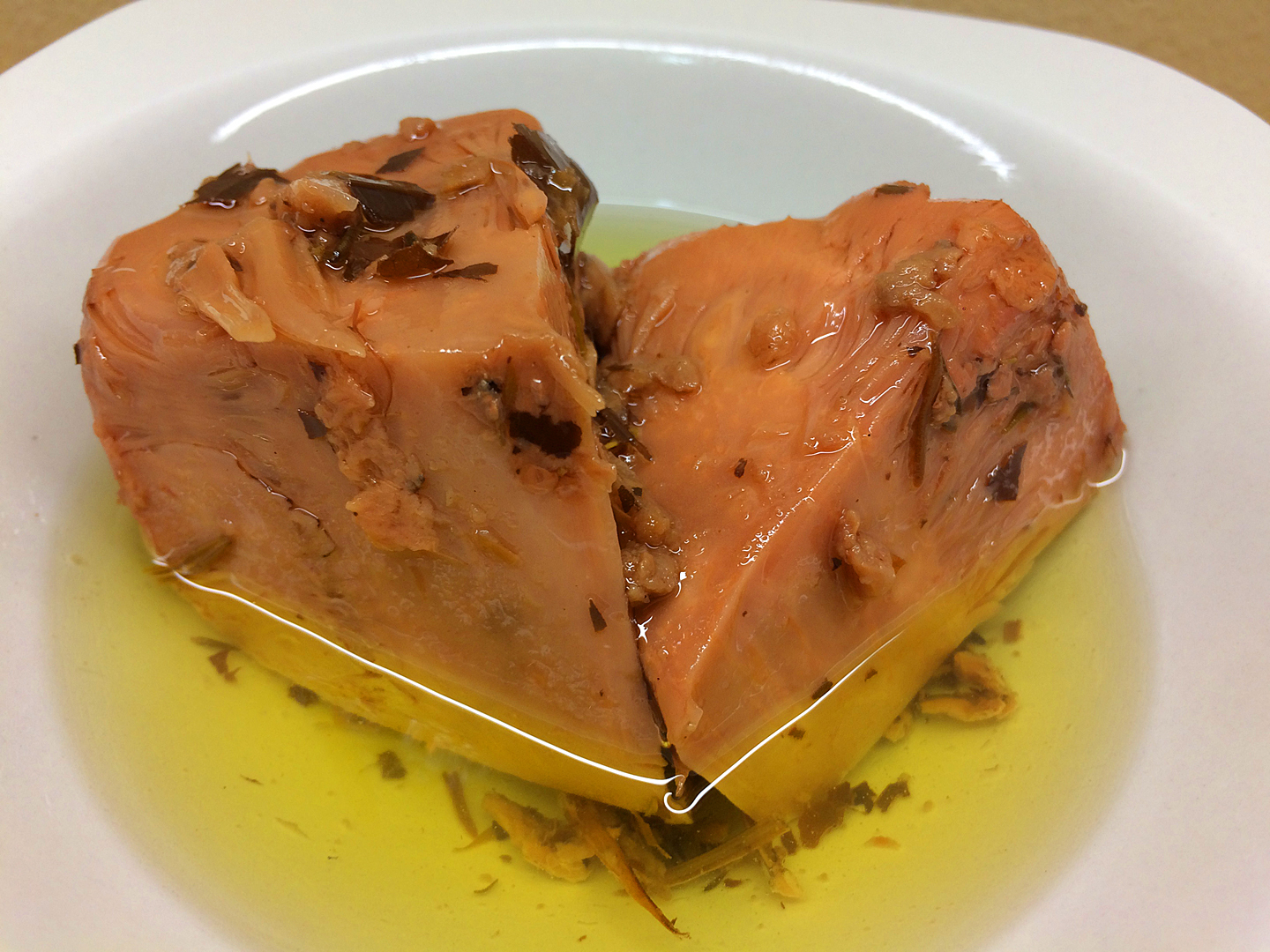 The jackfruit confit straight out of the can is falling-apart tender (it’s a confit, after all), not sweet in the least, and it picked up the flavor of the aromatics beautifully. I also used the seasoned oil in which it was packed as an ingredient for the sauce. 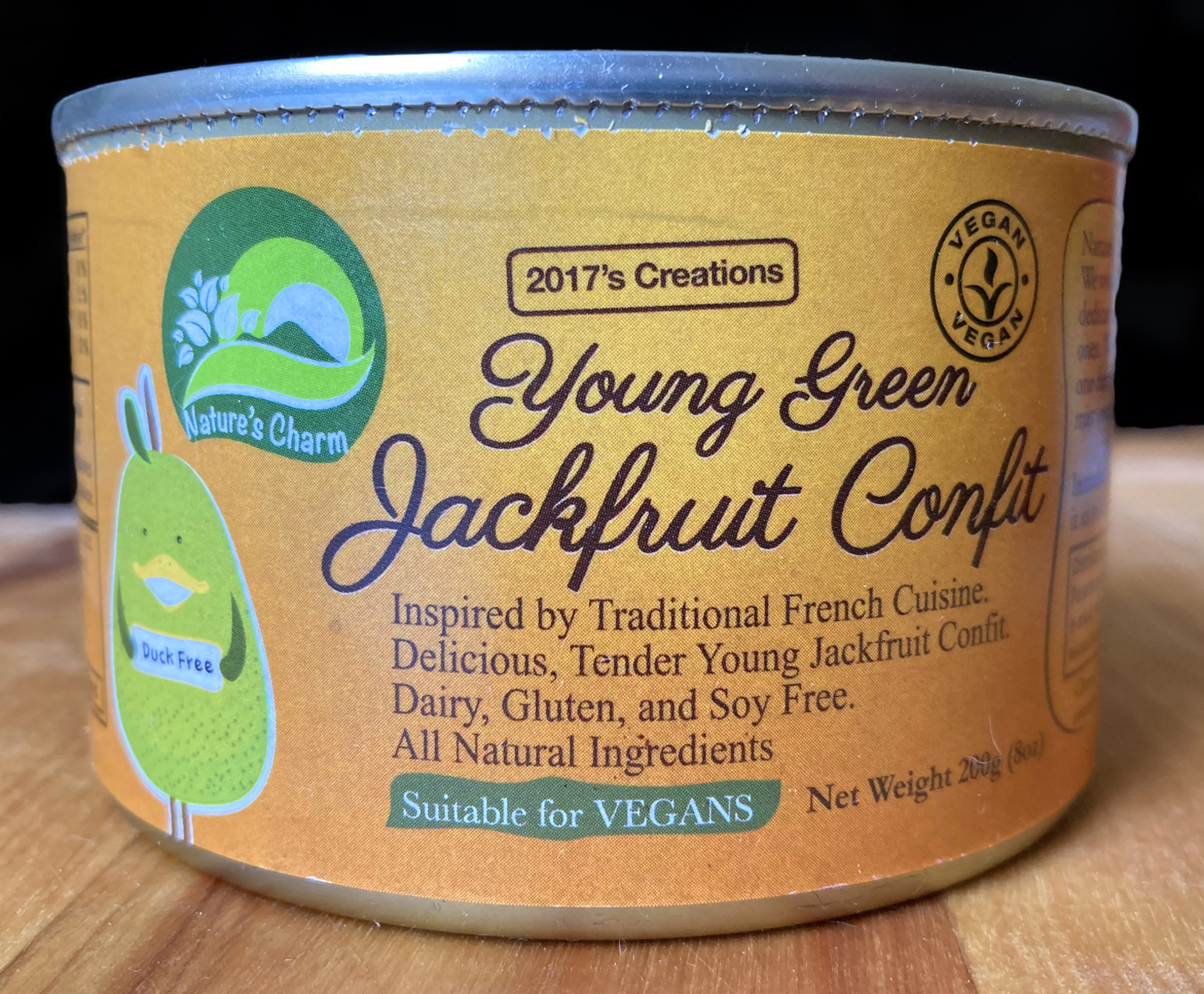 Ready to try some experiments of your own? Find Nature’s Charm Young Green Jackfruit on Amazon.com.

I’ve written about this triumph of texture over gravity before; in that post I described Vietnamese Pandan Cake, Bánh Bò Nướng, easily identified by its emerald hue, but Honeycomb Cake, aka Beehive Cake, has its fans throughout Southeast Asia and in China as well. It’s easy enough to find a snow white version in Chinatown bakeries around these parts (sometimes even on dim sum carts) but less frequently a chocolate colored (notice, I said colored, not flavored) variety like this one from Dragon Bay Bakery at 5711 8th Avenue in Sunset Park, Brooklyn. 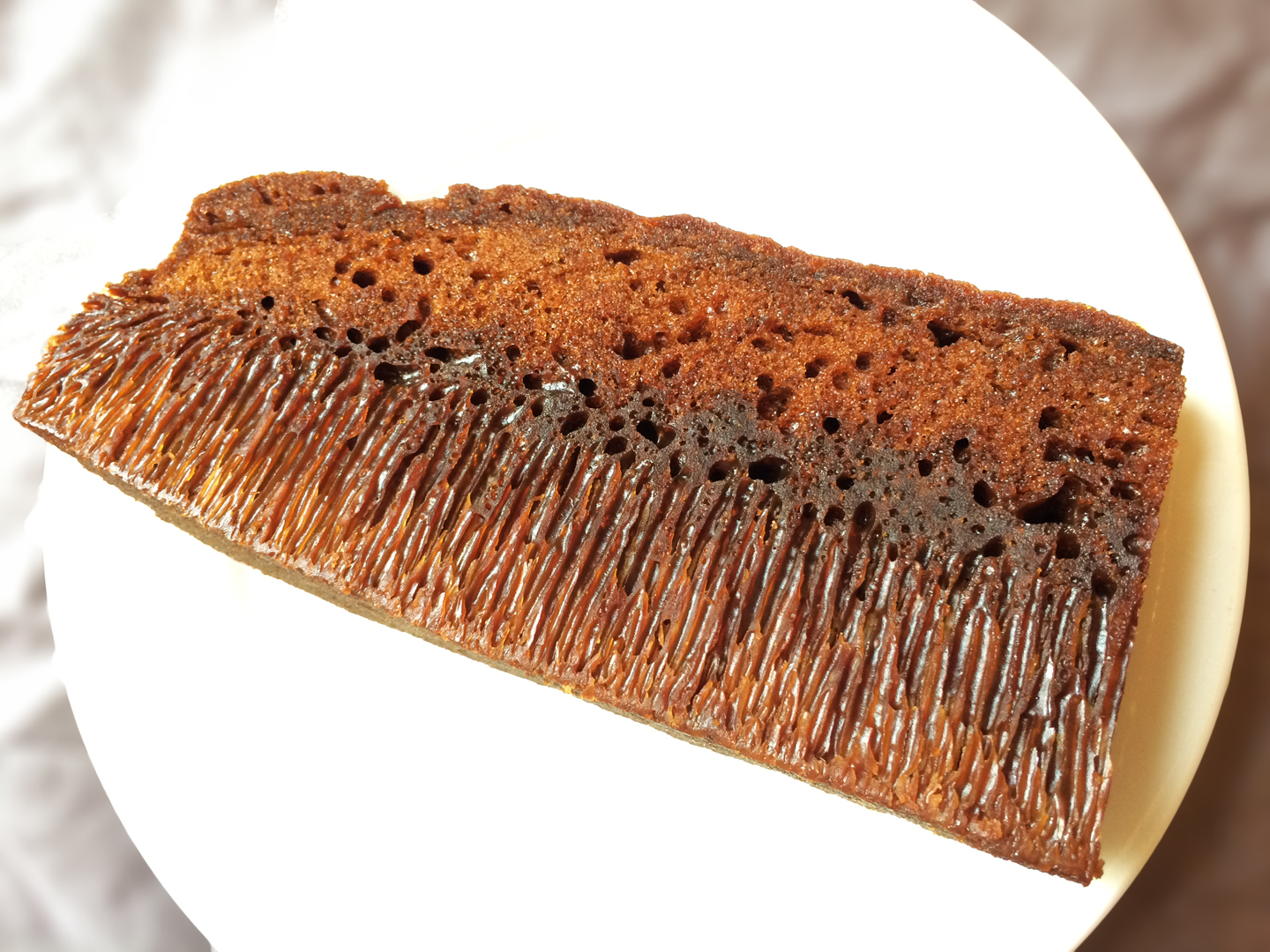 Above, a slab cut from the loaf; this piece is about nine inches long. It’s sweet but not too sweet, which I know will be welcome news to many of you; its texture is the key to its charm.

How does it come to look like this? Recipes differ. I’ve read that the type of flour used can be rice (common), tapioca (often in the Vietnamese version), or even wheat; the leavening agent, yeast (common), baking soda, baking powder, or a combination thereof; even the method of preparation can vary from steamed (common), to baked, or stovetop pan “griddled”. But somehow, the results manage to be rather similar: springy, bouncy, airy, spongy, fluffy, chewy, and squishy.

(Which quite by coincidence, I think were the names of the Seven Dwarfs. But I could be wrong about that.) 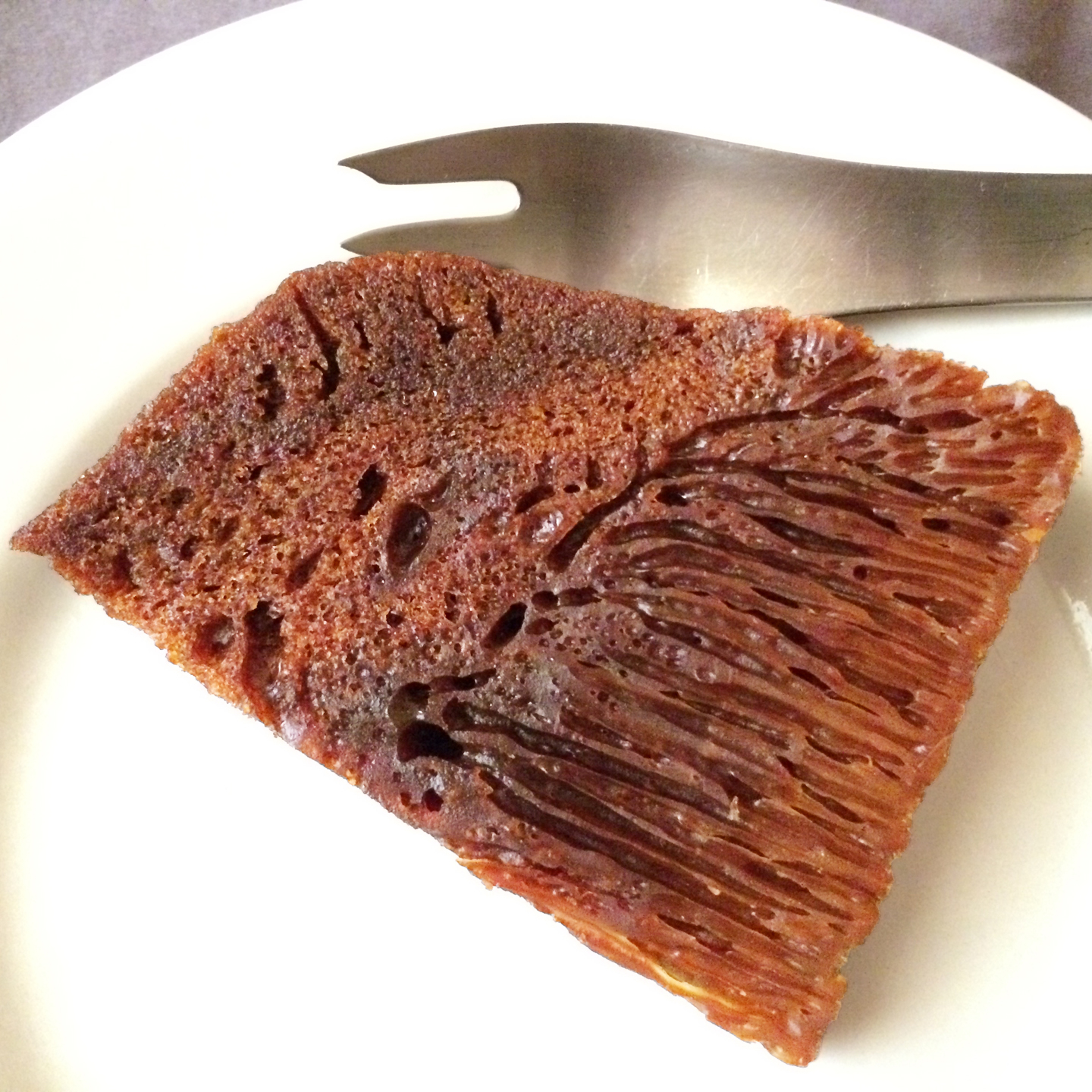 A more modest slice revealing the light cakey-looking top layer and the virtually weightless honeycomb structure supporting it. Its color comes from the use of brown sugar instead of white. 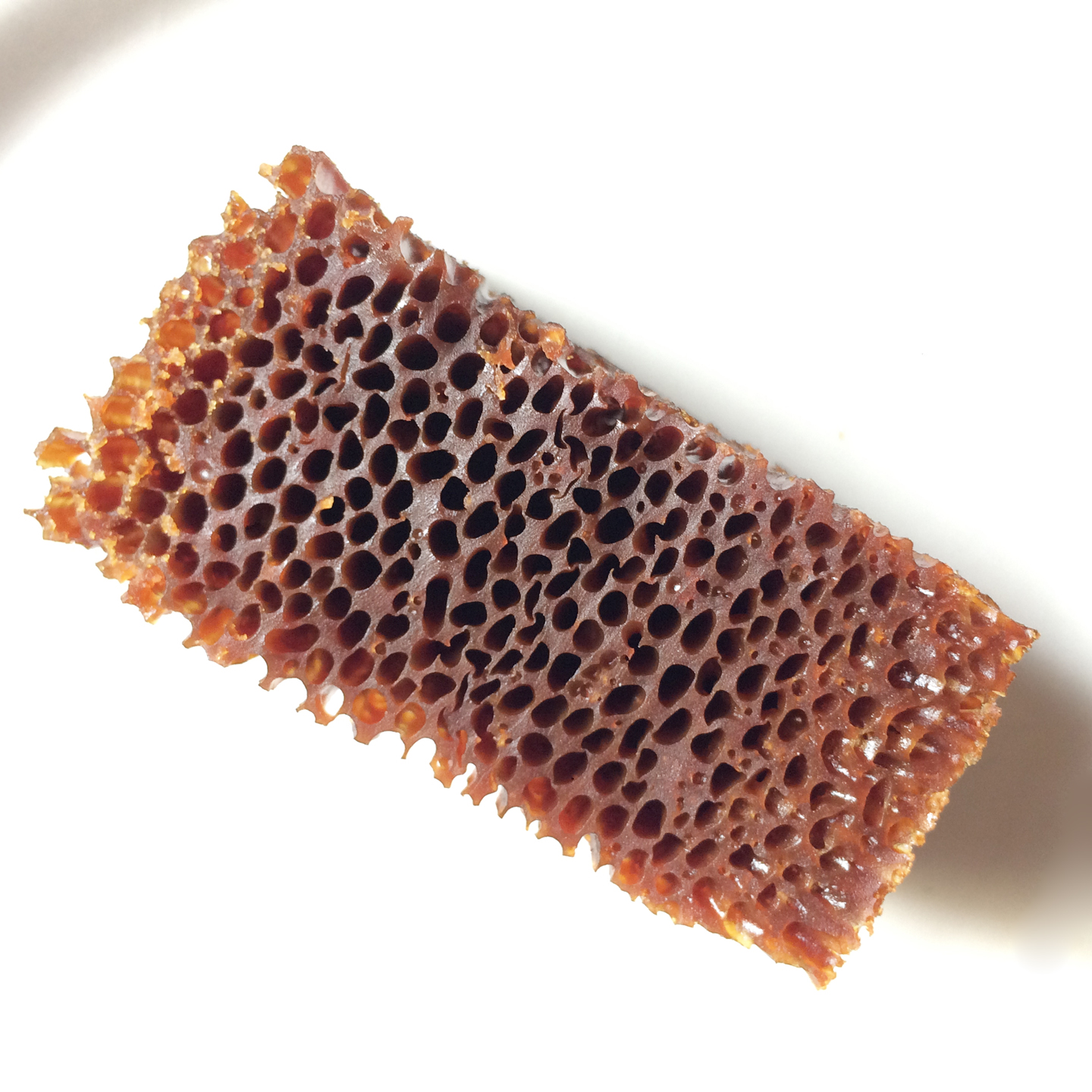 Still don’t get the “honeycomb” part? Here’s a cross section of the above slice, cut against the grain.


And a reminder: New York City boasts at least six Chinatowns and perhaps a few more depending upon your definition of what constitutes a Chinatown; just pick one and go! Now, more than ever, please SUPPORT CHINATOWN! 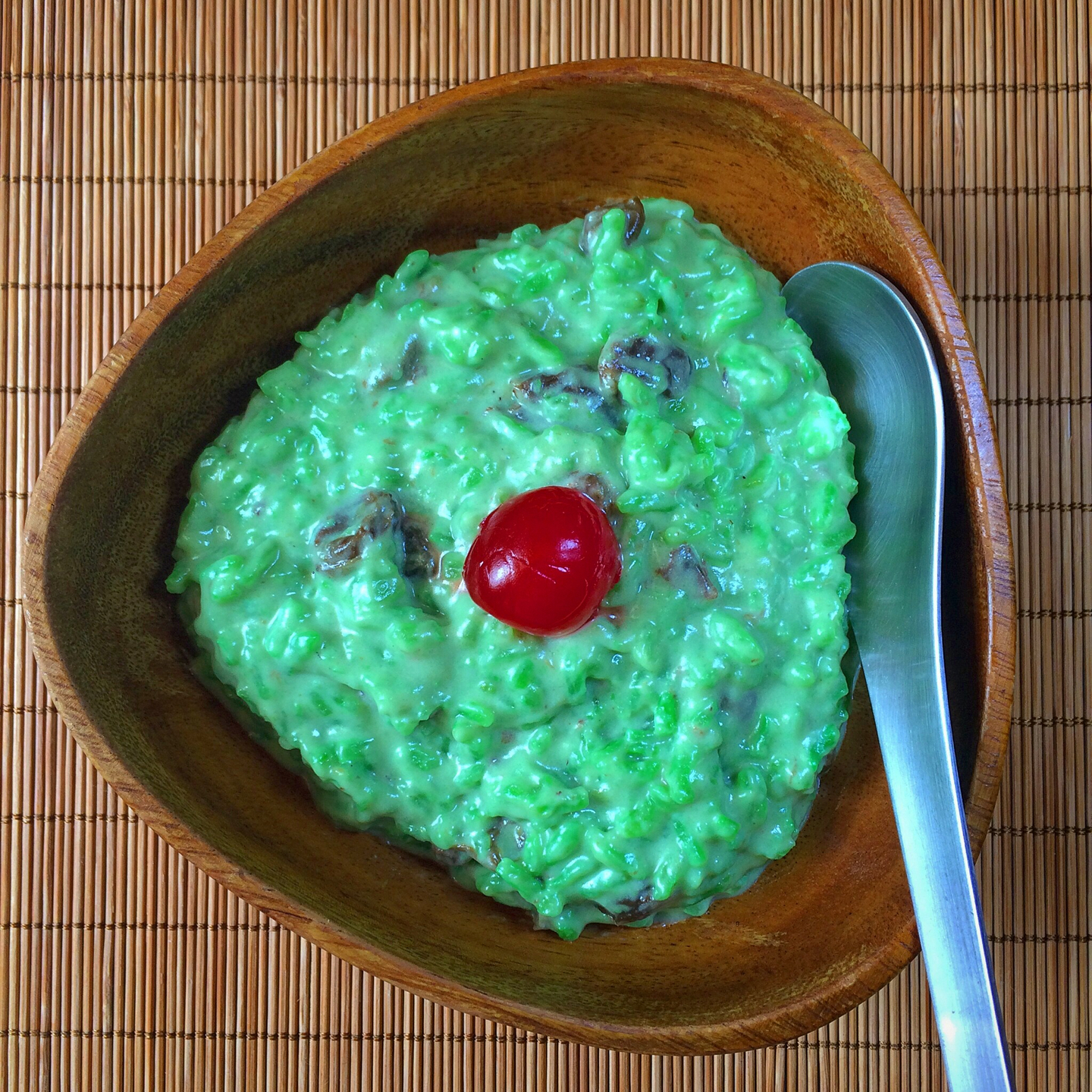 I often insist that rice pudding is the ultimate comfort food, and we can all use a little – no, make that a lot – of comfort right now. But since I’m invariably compelled to put some kind of ethnic spin on something that was perfectly fine to begin with, here’s my pandan rice pudding.

The bright green color comes from the leaves of the pandan plant, aka screwpine, a popular flavoring and coloring agent in Southeast Asian cuisine. It has exceptional compatibility with coconut much the same way that chocolate has with nuts, baked goods, or depression, so this version uses coconut milk along with rice as its foundation.

Two treats from Mama’s Kitchen, Stall 28 at Elmhurst’s HK Food Court, 82-02 45th Ave in Queens. They continue to hone their menu and it keeps getting better with each iteration. 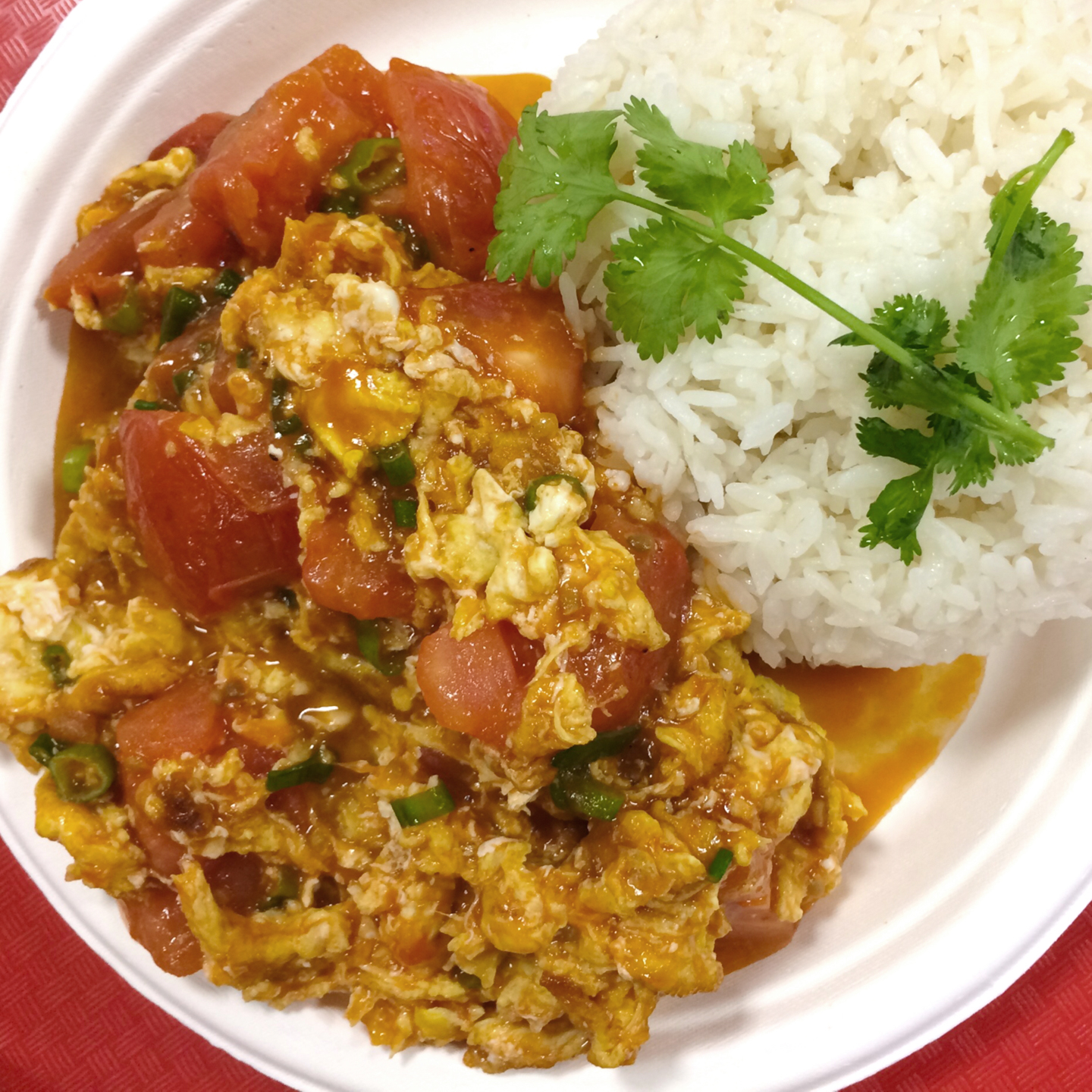 I’ve written poignantly about my fondness for this dish, the epitome of the homiest of Chinese home cooking, tomatoes and eggs. I give Mama much credit, for this is possibly the boldest version I’ve tasted in a long time. It’s all about their take on the seasoning; whoever is in the kitchen has a style of their own. All I know is, my mama could never cook this way! 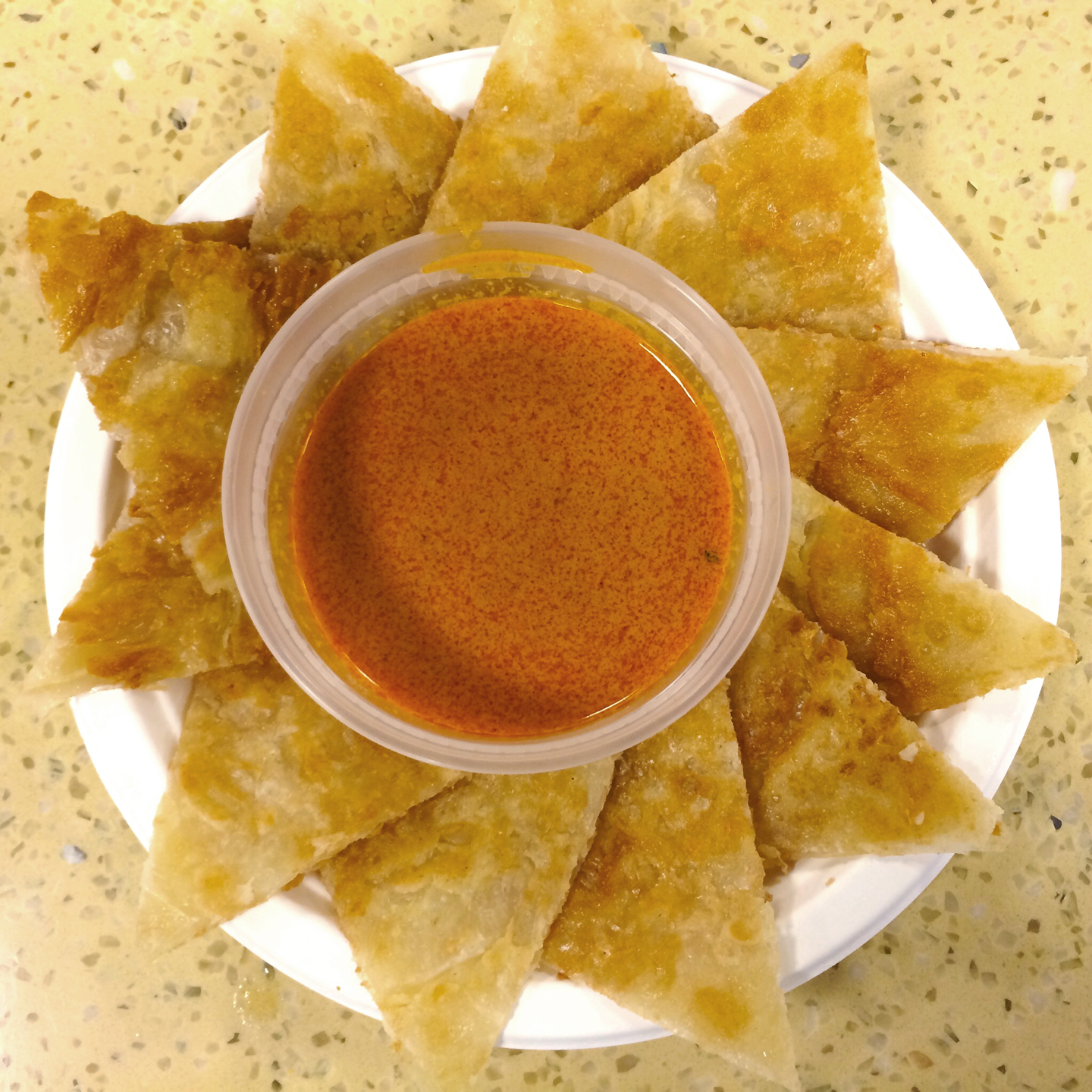 This is their spin on the Southeast Asian classic, Roti Canai. It’s usually served with a chicken curry sauce, but this version is rather different from any I’ve experienced; its seasoning had overtones of Thai herbs and spices but still wasn’t something one would immediately identify as Thai. In order to more firmly establish its culinary character, I’ll return to have another go at it. This task will be a breeze since Mama’s Kitchen is one of the stops on my new Elementary Elmhurst Ethnojunket (Shameless Self-Promotion Department 😉). Visit my Ethnojunkets page to learn more. Hope to see you soon! 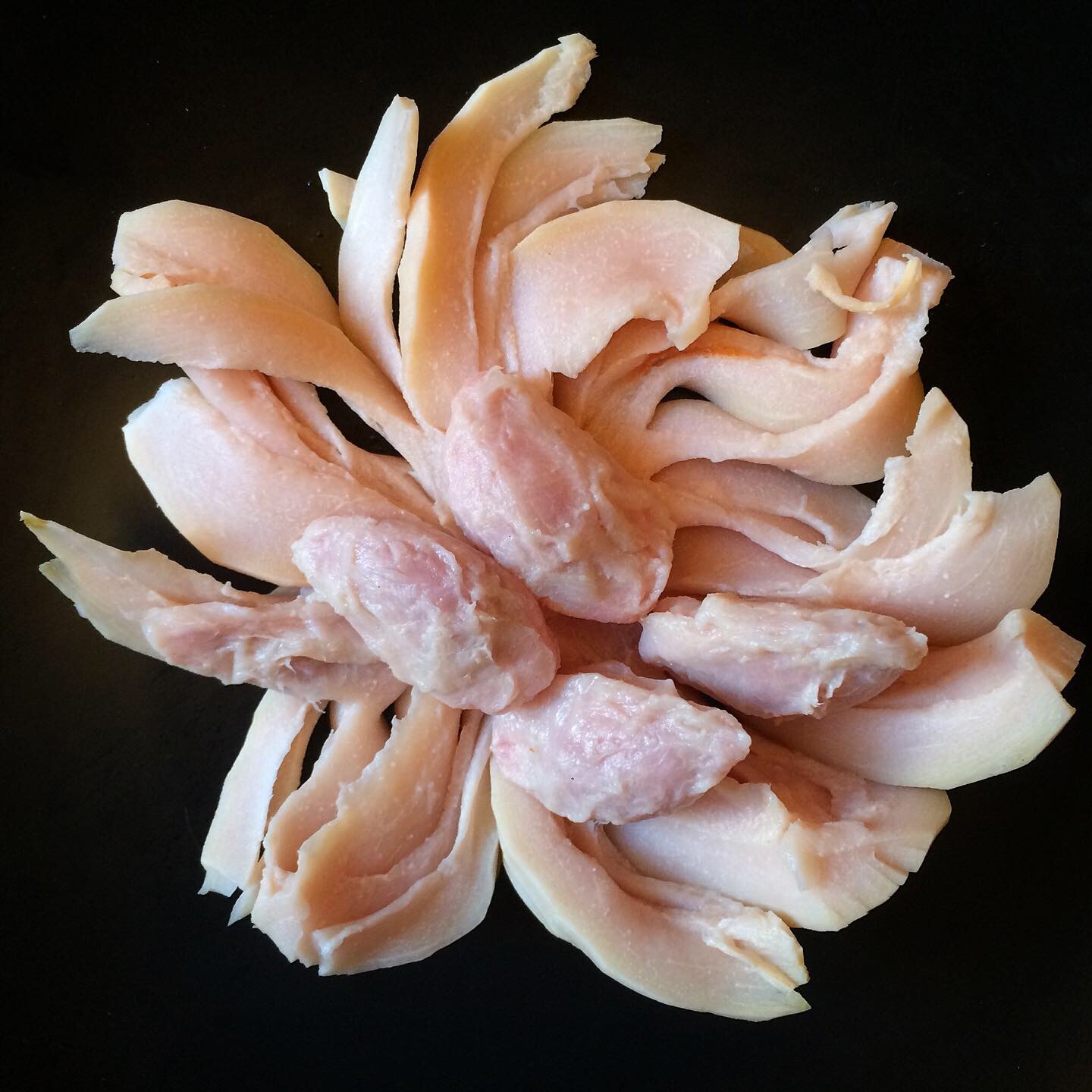 There are few moments more rewarding than stumbling upon some sort of food that I’ve never experienced. (Okay, so it takes all kinds, I guess.) Consequently, I was delighted to find santol (you might see santal) in the refrigerator case at Pata Market, 81-16 Broadway in Elmhurst, Queens.

The fruit hails from Southeast Asia and according to my research looks a little like a peach-colored mangosteen before preparation. Fortunately, the troublesome work of removing the thick shell-like rind and carving the edible part into delicate slivers had already been accomplished. I separated the seeds (don’t swallow the seeds!) from the slices; it had a flavor I found mildly sweet and a little tart, and a soft, pulpy texture like a pear that’s not quite ripe. 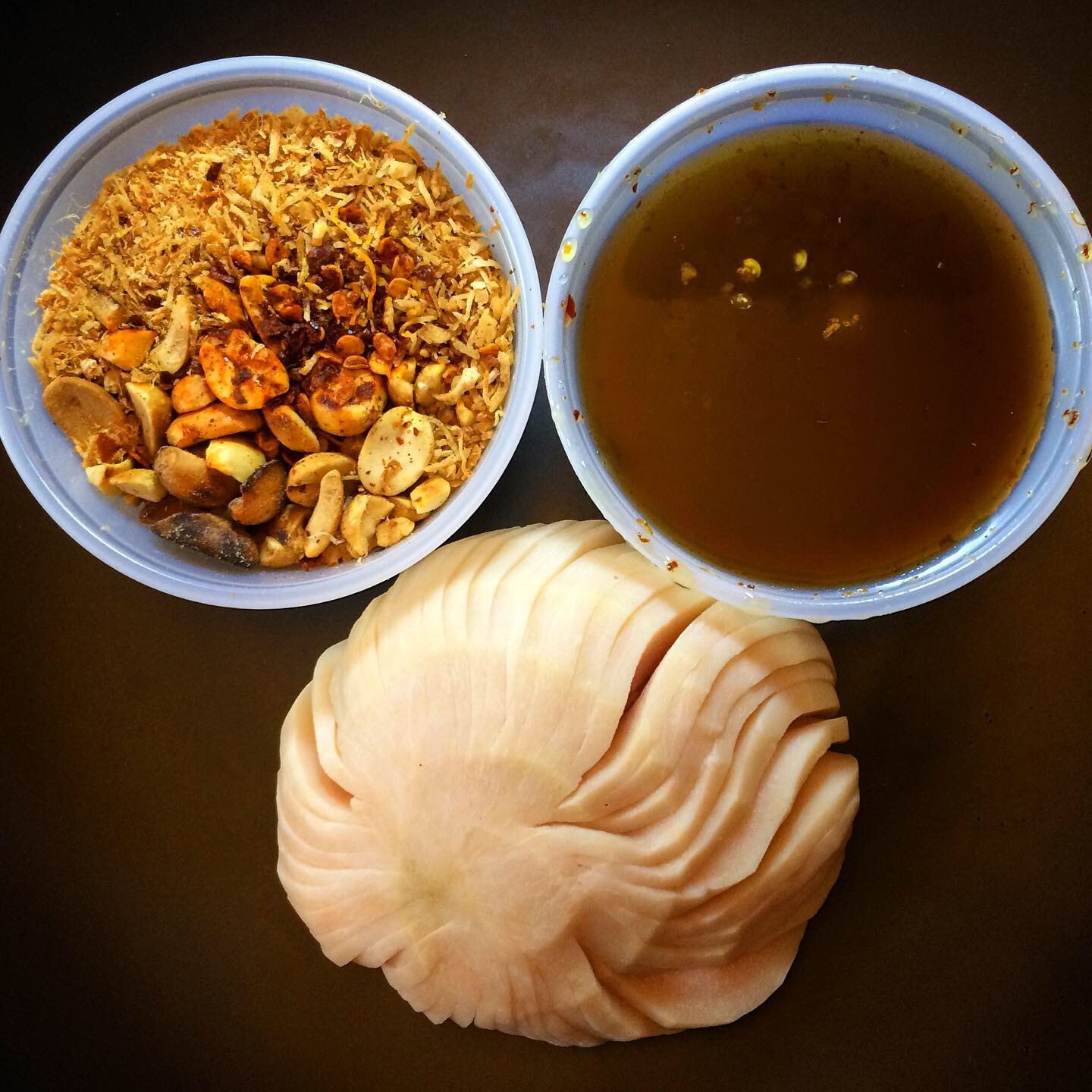 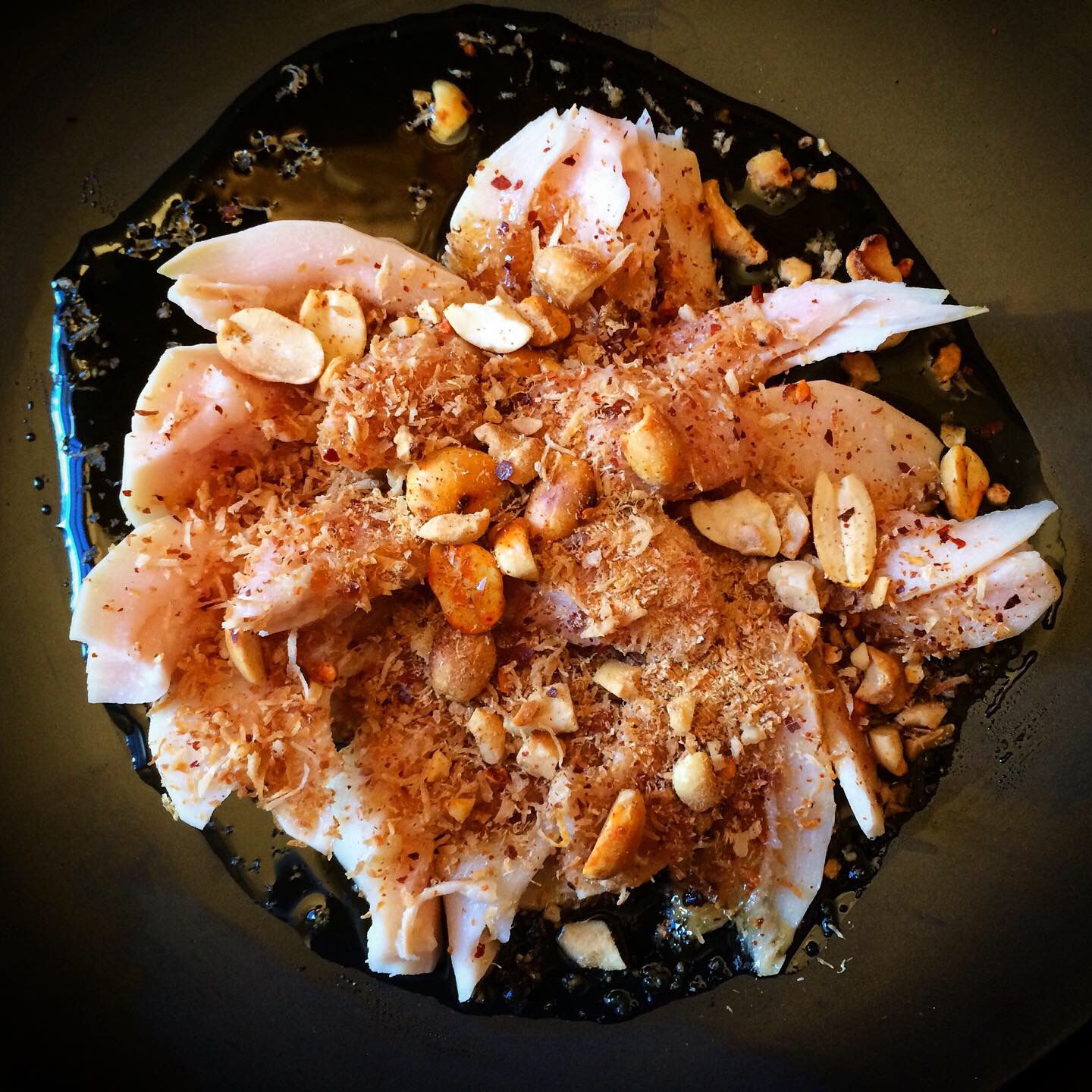 It’s sold with a sweet, very spicy sauce made from palm sugar, fish sauce, shrimp paste, pounded dried shrimp, and chili along with a little cup of roasted coconut and peanuts plus a touch of cayenne.

Dressed with its accoutrements, it was a pleasing change of pace. If you secure one of these, be forewarned about the spice level of the syrup; it won’t assault you, but the taste of the fruit is subtle and you don’t want to overpower it. It’s a righteous complement, however.

<rant> In researching santol, I found a number of videos on the web that were actually embarrassing to watch (sorry, that’s the only word that fits) with more misinformation than I could countenance based on my own limited experience. I do understand that YMMV regarding specific cultivar and degree of ripeness, but really. If so many people in that part of the world consume and enjoy these, maybe you’re missing something and should consider giving it another go? </rant> 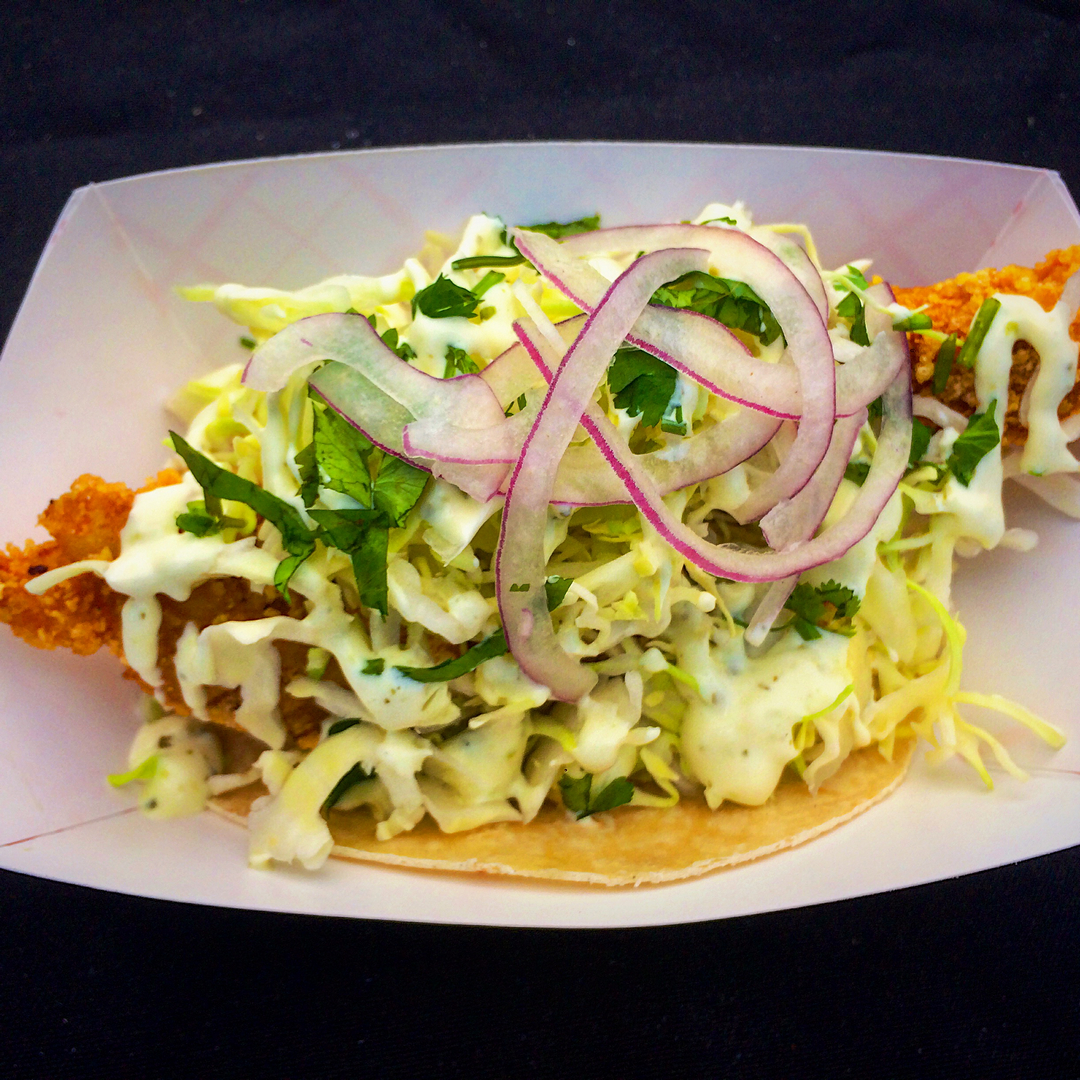 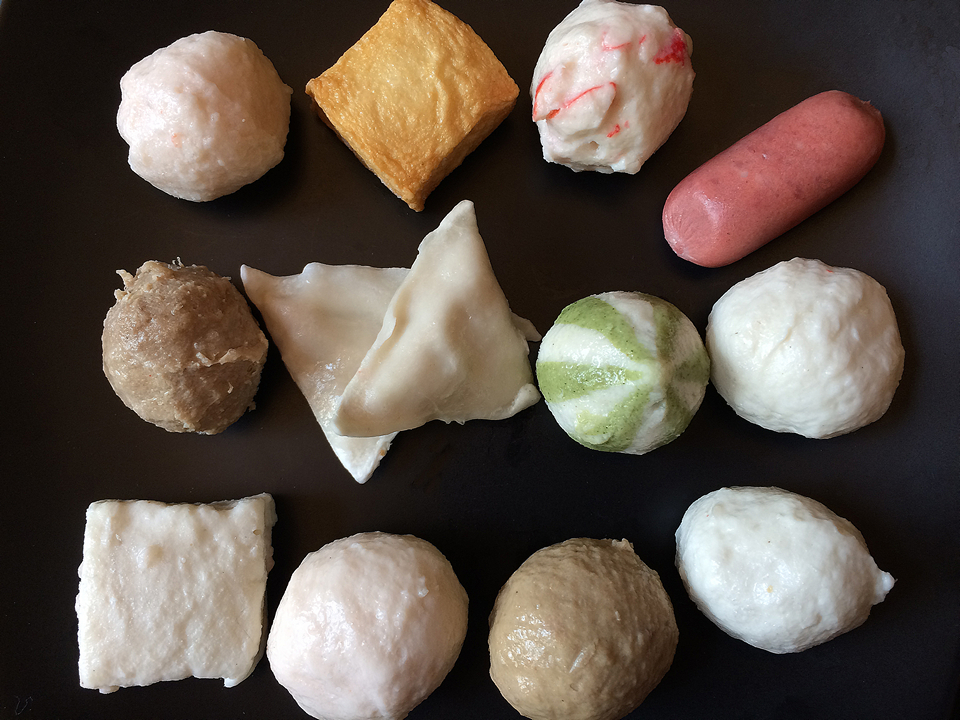 You’ve undoubtedly seen these if you shop at Asian markets whether Chinese, Japanese, Korean or Southeast Asian because they’re a favorite everywhere in that part of the world. (Scandinavia has its own variant, but we’re not going to venture that far north this time.) There are even fish cake emoji like 🍥 (narutomaki) and 🍢 (oden). In local Asian markets, you’ll find fish balls and fish cakes in the freezer case packaged in bags or plastic wrapped in a small tray, but if you’re lucky they’ll also have bins of loose assorted varieties where you can cherry-pick as many or as few of whichever ones suit your fancy – my style of shopping, of course.

At their most basic, fish balls are made of fish paste: finely ground fish (pulverized and pounded), egg white, starch, plus a little seasoning. You may have also encountered fish paste as Japanese surimi which is used to make imitation shellfish like the crab stick you see in those ubiquitous California rolls. Incidentally, you can often purchase a few types of fish paste by the pound at the larger markets in the fresh fish/meat department. These are generally the stores’ own blends and are worth trying, but they’re easier to work with as filling for a dumpling or stuffing a vegetable, dim sum style, rather than for rolling your own fish balls, so I strongly recommend getting the ready-to-go frozen ones as an entry level fishy requisite.

Anyway, I was shopping at Jmart (136-20 Roosevelt Avenue in the New World Mall in Flushing, Queens) and fortuitously happened upon one such bin – fortuitously because I had just made a savory Chinese duck soup from a pair of carcasses that contributed their meat to a Thai duck salad I crafted and I had been trying to decide whether to put noodles or dumplings in it. This bounty made the choice easy – and now I had the perfect excuse to buy a few of each kind.

It’s difficult to rate them on some sort of 1 to 10 scale because they’re all quite good but the cuttlefish balls and all of the filled varieties were especially tasty; the shrimp ball filled with pork and sea cucumber and the fish ball with pork filling were excellent. By way of identification, from left to right in the photo above:

Preparing them is a piece of cake (no, not fish cake) because they’re already cooked. The easiest method is to simply drop them into boiling soup/water; they’ll float to the top when they’re good to go. Alternatively, they can be fried and served with just about any Asian dipping sauce; you’ll find them on skewers at some food trucks, and I’ve seen them served with a curry sauce as well. Obviously, they’re incredibly versatile.

The flavor is mildly fish-like (except for the ones made from meat which are mildly beefy or mildly porky) which partly accounts for their affinity for various dipping sauces and also for their adaptability in combining with other ingredients. The texture is tender and frankly springy/bouncy, but in a happy way. 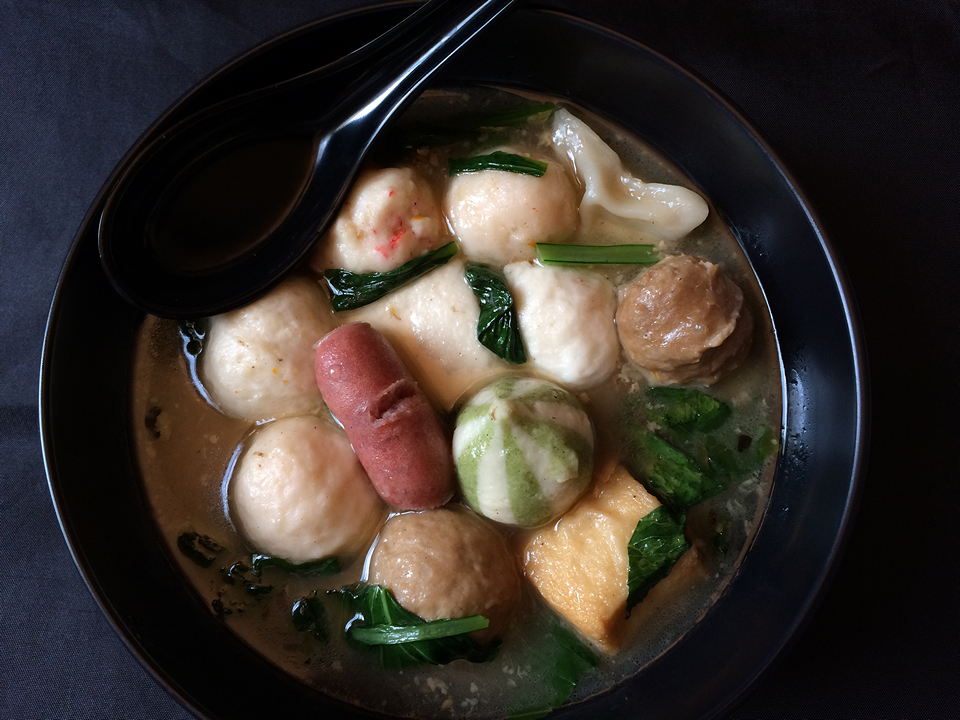 The final photo was taken just before adding more soup since it would have completely covered them up; there are some greens in there for good measure.

So I’m curious: let me know if or how you’ve used these little wonders in the “Leave a Reply” box below! (If you don’t see it, click the reply button next to the title of this post.)