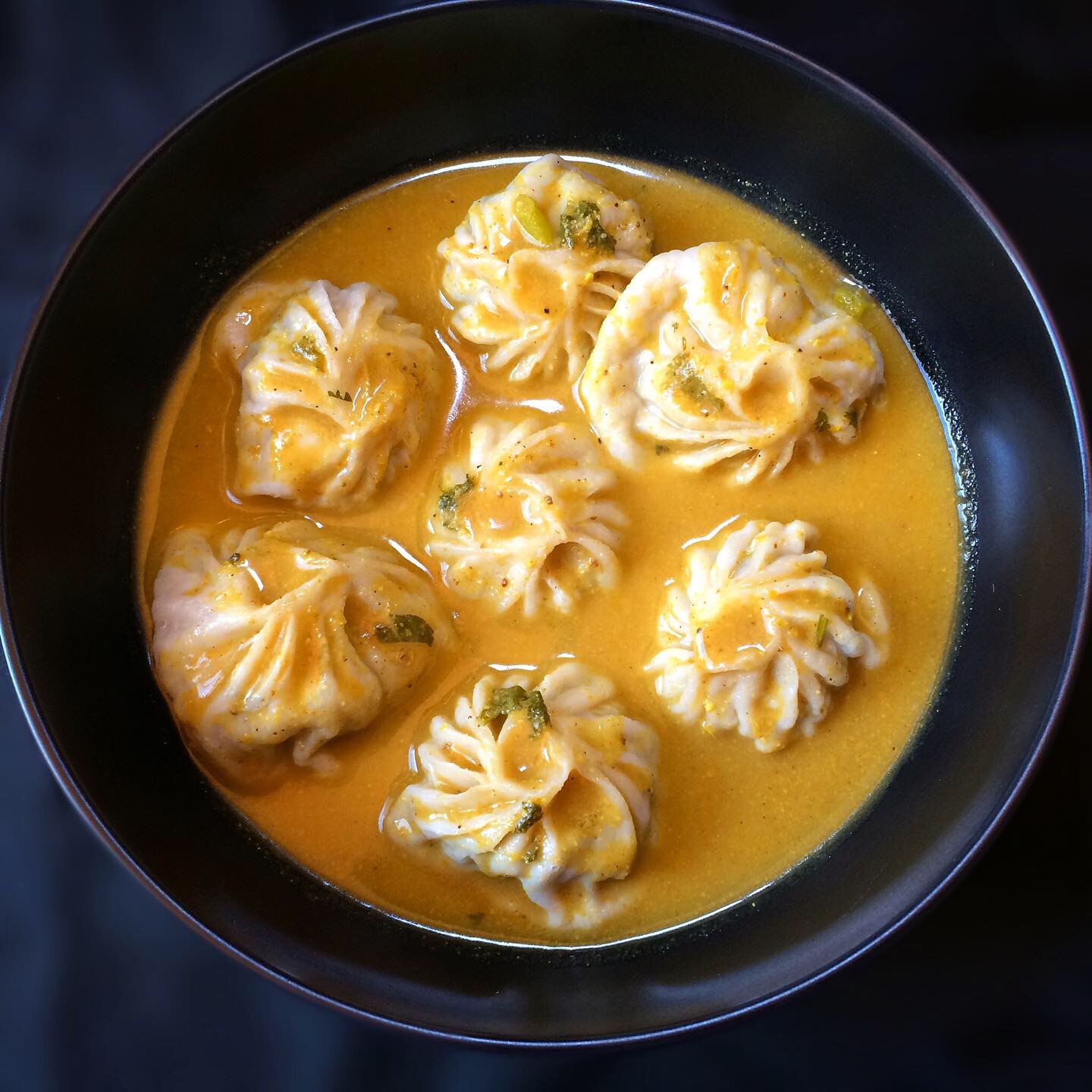 It only seems like we’d been waiting forever for Gorkhali, the Nepali restaurant at 77-04 Roosevelt Ave, Jackson Heights, to open its doors. Any time I was in the neighborhood with extra time on my hands, I’d head over to see if the promise had been fulfilled, only to hear the sound of my crest falling. But not long ago as I was rushing past between pre-lunch (which had run late) and lunch-lunch (which was about to commence), wouldn’t you know it, the kitchen was truly in full swing. “How long would it take to get an order of Jhol Mo:mo to go?” I panted. “Ten minutes,” came the reply.

So totally worth the wait. Even after a microwave reheat later at home, they were excellent. Herby and spicy with a unique flavor profile, they were unlike some of the standard regulation versions I’ve had in the neighborhood. Obviously, I’m keen to return with more time and a tableful of pals to run the menu – which currently is more like a long, undifferentiated list of the usual suspects: choila, sekuwa, sandheko, thukpa, thenthuk and lots more begging to be tasted. 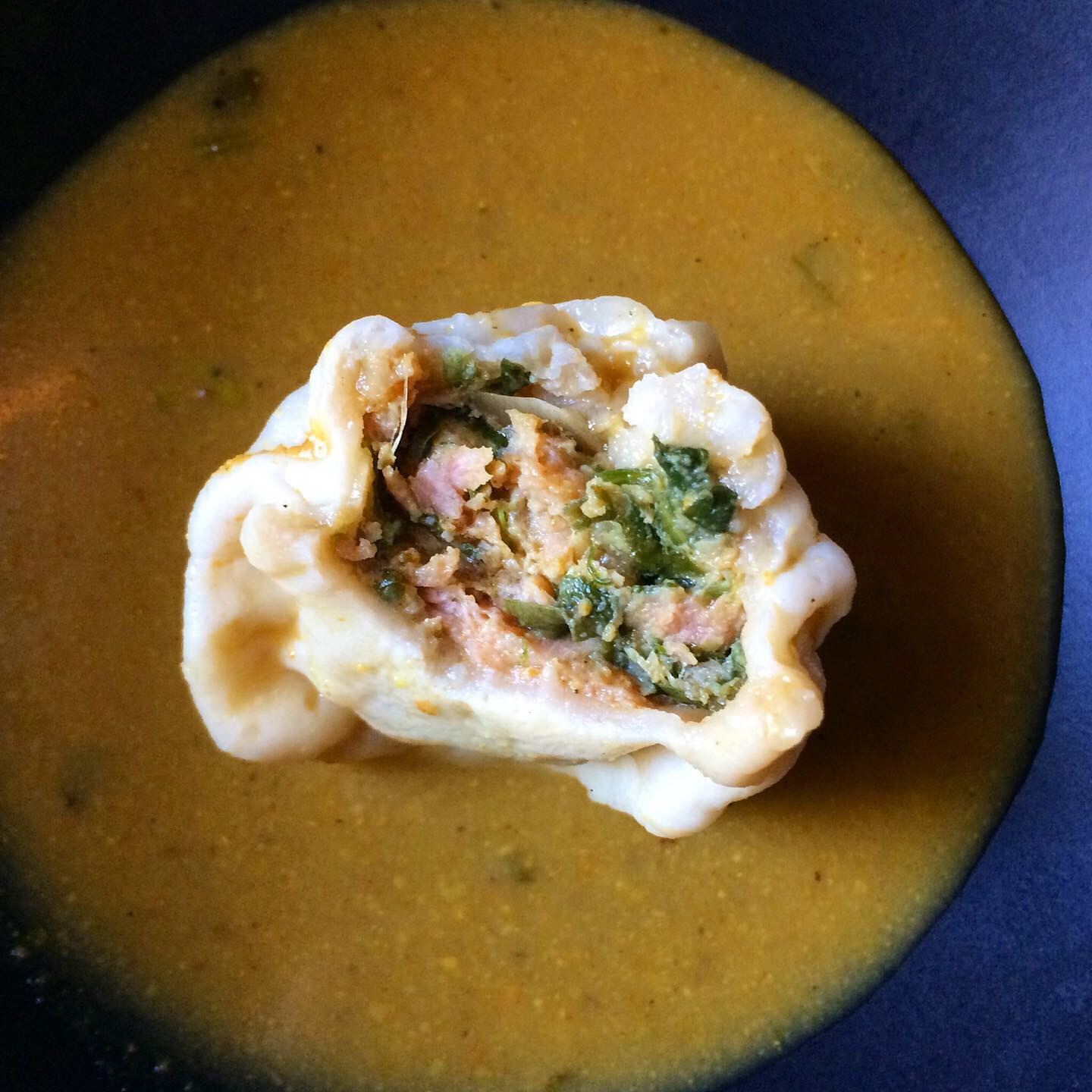 The Equal Opportunity Celebrant strikes again, eating my way through Holi today, the Hindu festival of spring and colors celebrated predominantly in India and Nepal. The holiday recounts the heartwarming legend of Krishna coloring his face for Radha, his love, and heralds the arrival of spring. 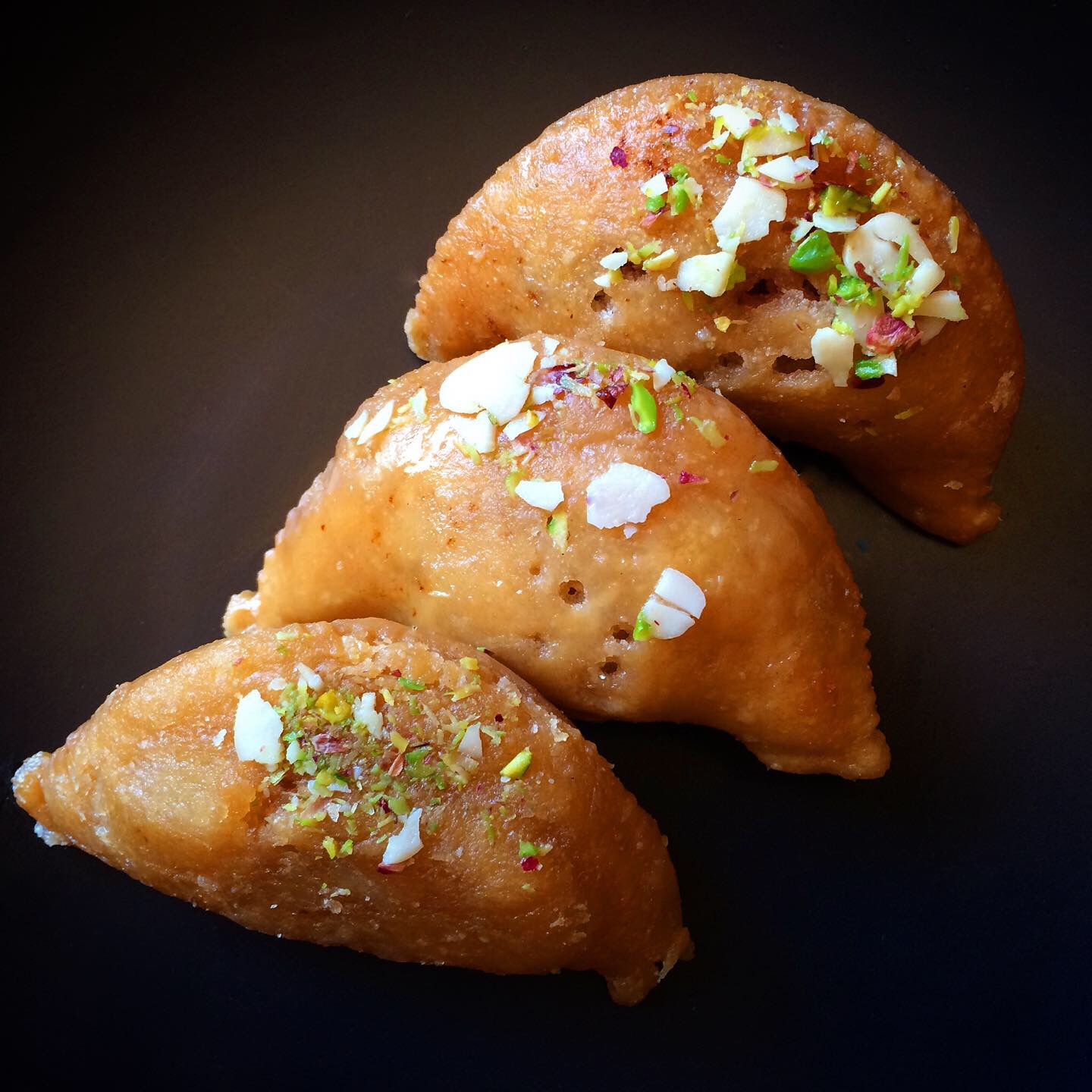 This is gujiya (you might see gujia), a classic Holi sweet, half-moon shaped and similar to a deep-fried samosa. Crunchy outside and soft within, it’s filled with sweetened khoa (milk solids), ground nuts, grated coconut, whole fruits and nuts (raisins and cashews in this one), cumin seeds, and a bit of suji (semolina) for texture. These Holi day treats came from Maharaja Sweets, 73-10 37th Ave, Jackson Heights, Queens. 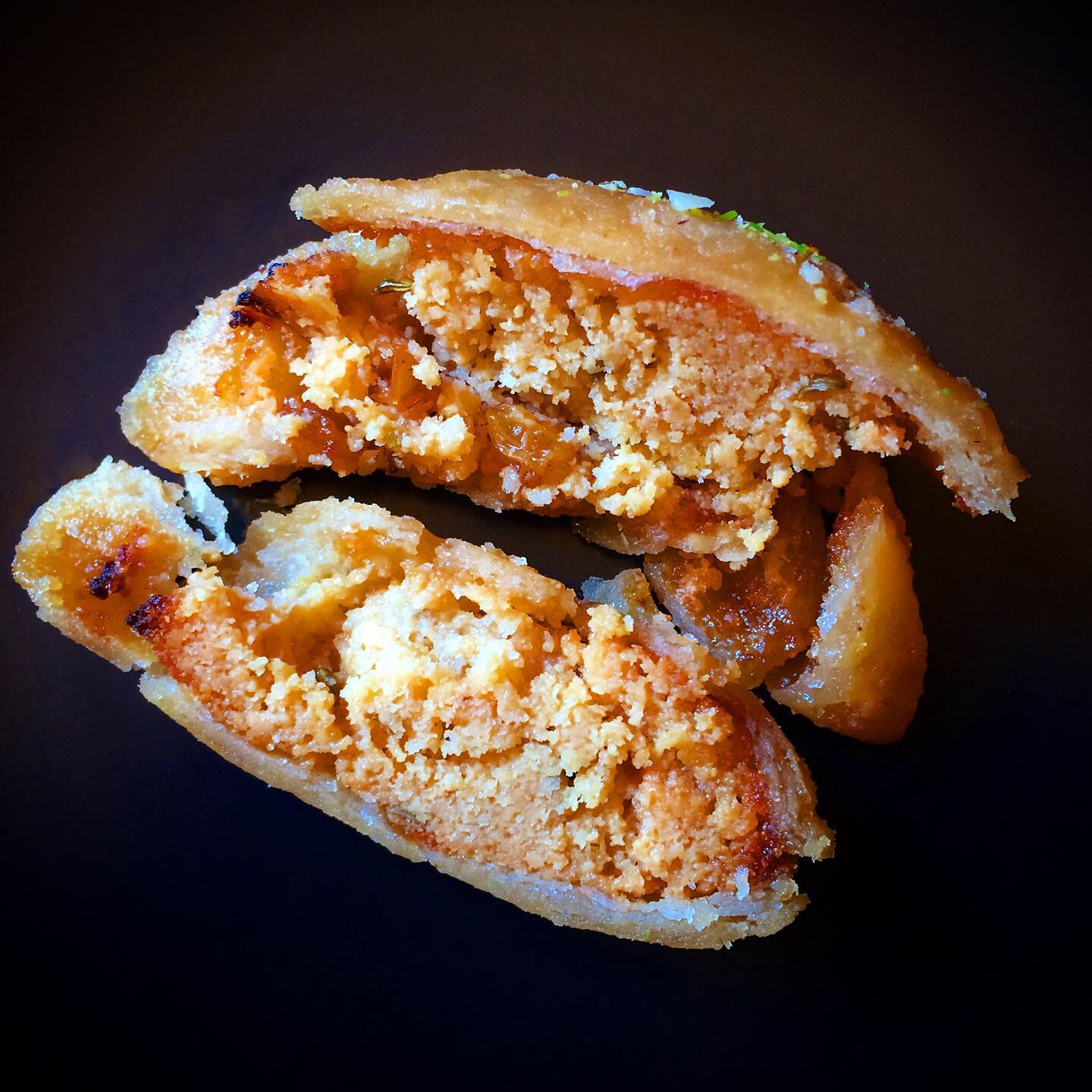 Oversized jalebi are popular for Holi as well, and just like on Diwali, the Hindu Festival of Lights, all kinds of mithai (Indian sweets) are the order of the day. Read about them and check out the photos here.

Himalayan Yak Restaurant has been a Jackson Heights fixture since 2004. Specializing in Tibetan and Nepali cuisine with a soupçon of Indian and Bhutanese dishes sprinkled in for good measure, they’ve recently added a new “Yak, Yak, and Yak” section to the menu so, having dined there years ago, I had to go yak – er, back. 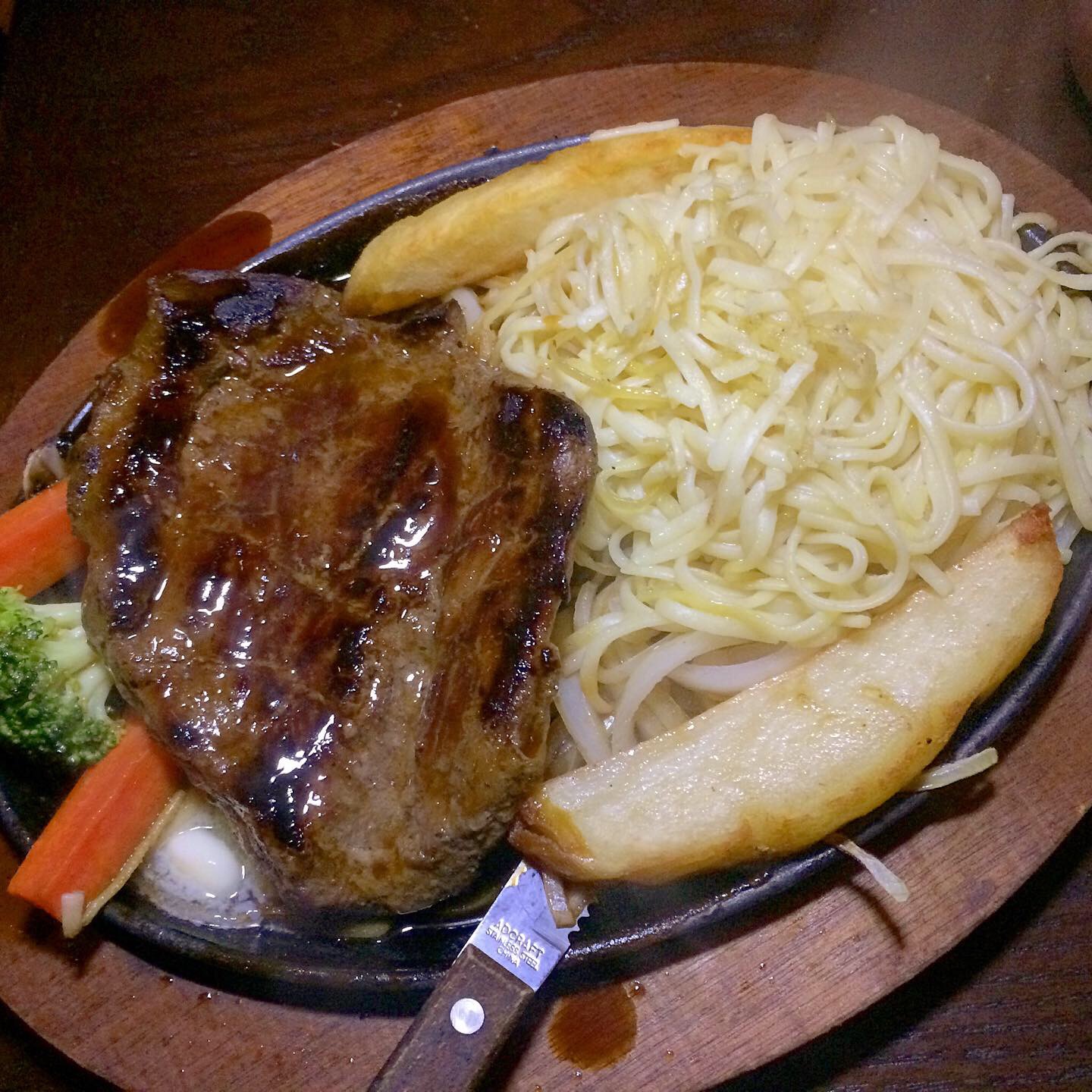 My understanding is that the principal meat consumed in Tibet is yak, so we ordered the Yak Sizzler since it appeared to be the most straightforward presentation of the meat. Salubrious health claims notwithstanding, yak tasted a lot like beef to me but that’s giving it too much credit. To these taste buds it didn’t have a lot of personality and it was a little tough and chewy. It arrived with linguini-like noodles that stuck to the pan a bit which made for a little pleasant crispness, and that’s as it should be – it’s a sizzler after all – and they released when mixed with the meat juices. Since that “sauce” is primarily pan drippings (and perhaps some butter?), their flavor was intense and particularly good. 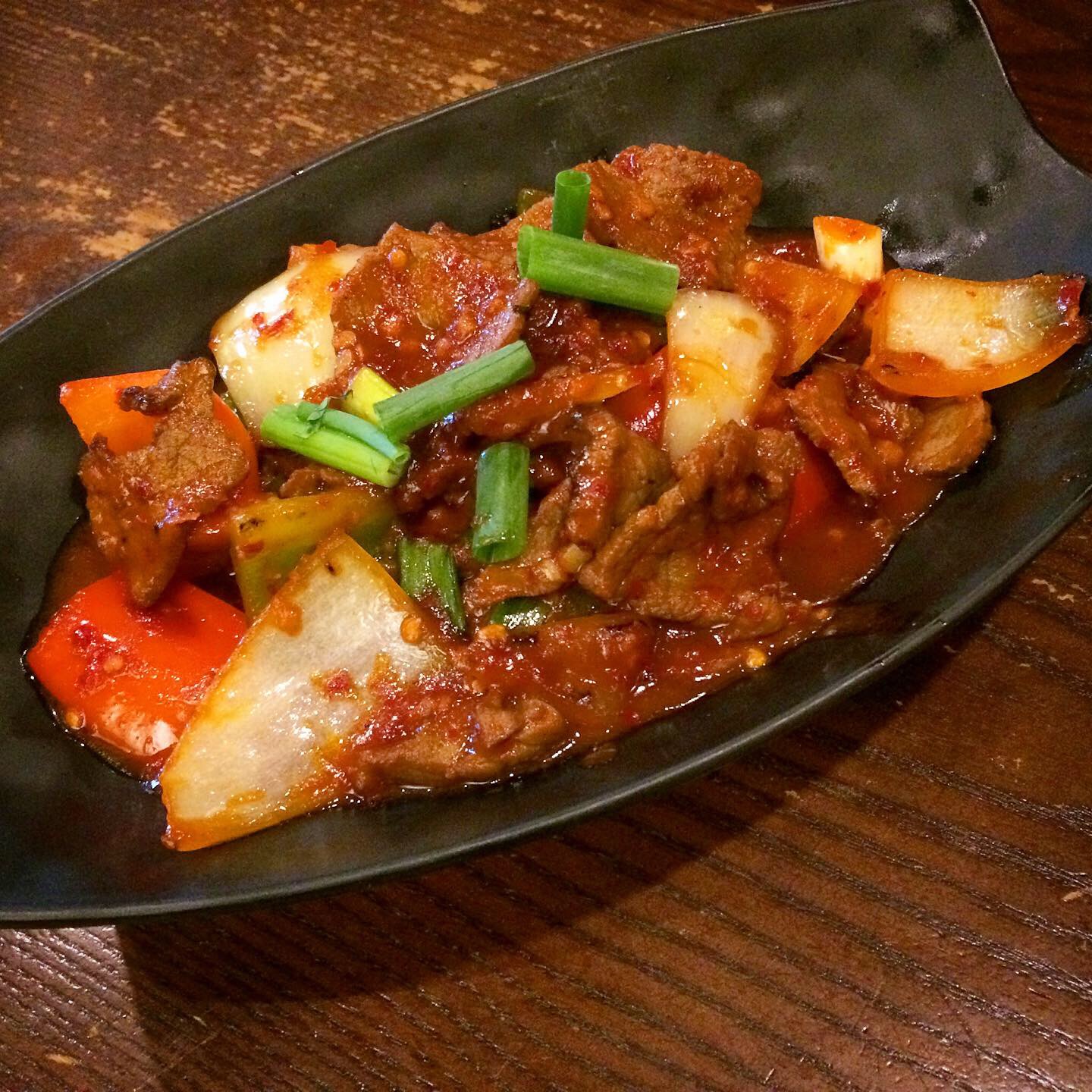 Yak Shapta (you might see shaptak) features the meat in a more elaborate guise, stir fried in a medium spicy chili sauce with onions, red pepper and scallions. Again, the meat was a little chewy, but that’s yak for ya. 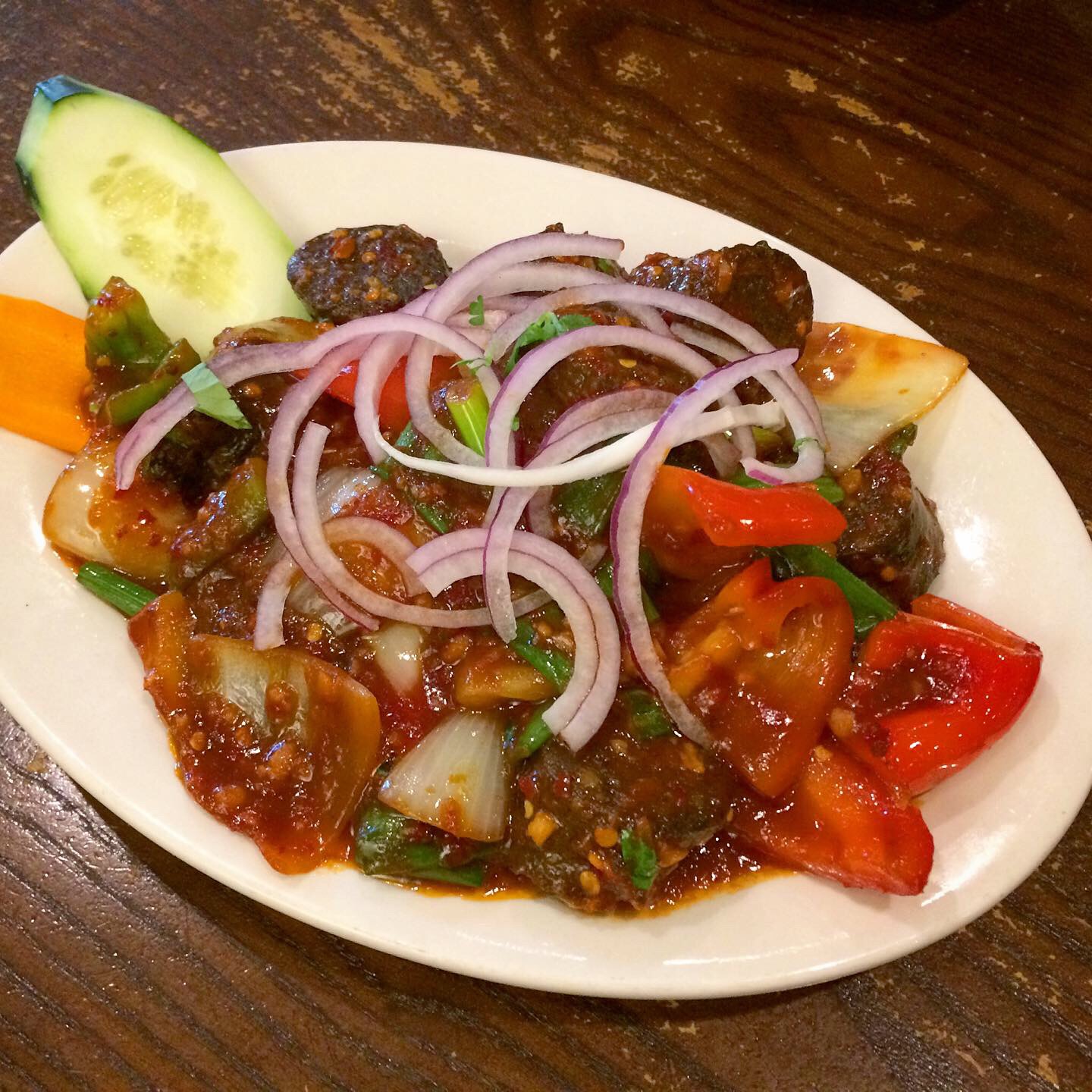 Yak Gyuma Chilli. Gyuma is blood sausage, the Tibetan answer to morcilla and so many others, prepared from ground yak meat, chilies, and a starchy filler, served here with onions and bell peppers in that medium spicy chili sauce. Less dominant character than some blood sausages, but in this case, that’s a good thing. 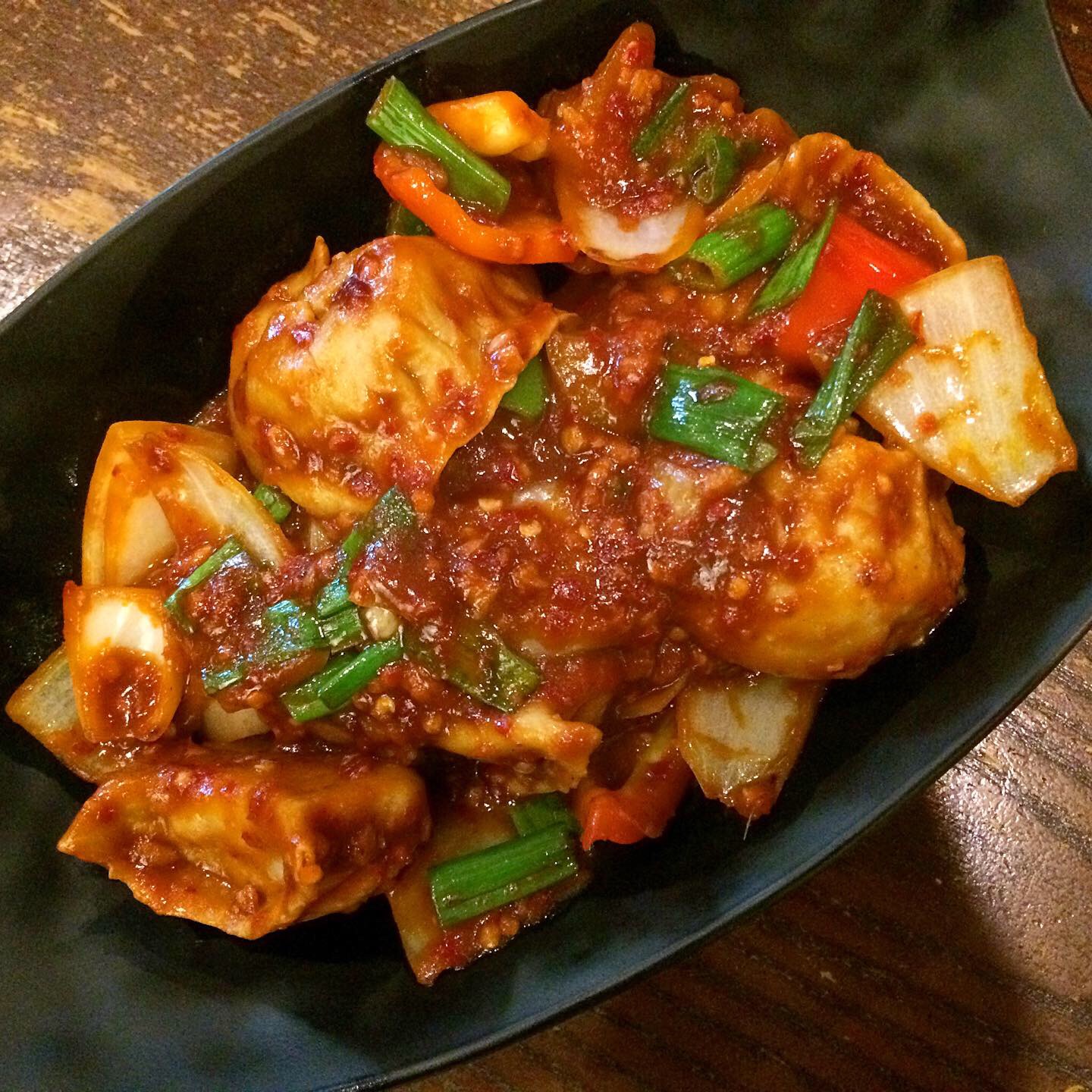 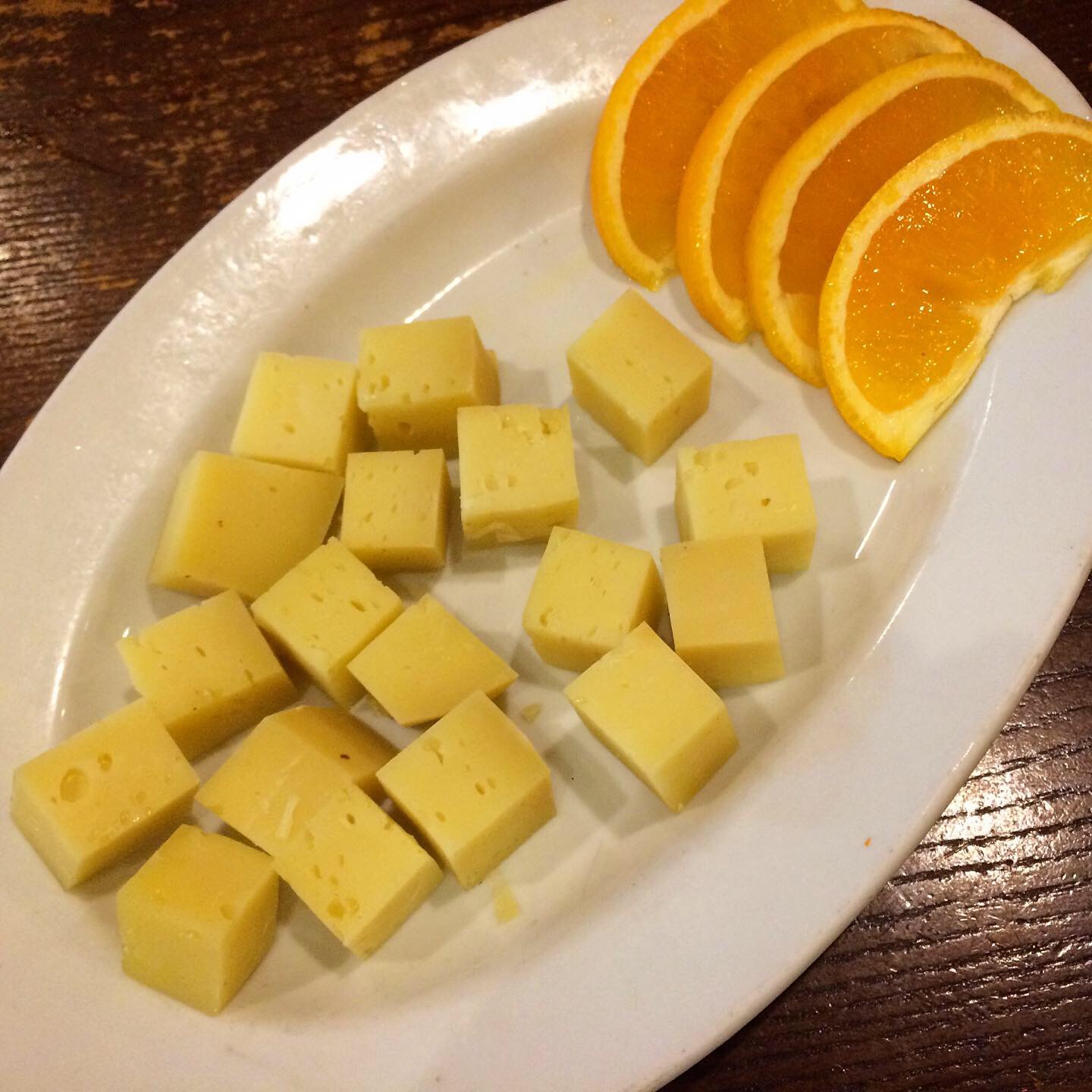 …and Yak Cheese. An Emmentaler doppelganger. Seems like the next word in sequence should be “expialidocious”. Go ahead, try it. I’ll wait. Apologies for the earworm. (Anyway, wasn’t Emmentaler-Doppelganger the third stop on the Orient Express?)


So I gathered a group of world food lovers for a subsequent visit. We tried almost everything above, in addition to these yakless selections: 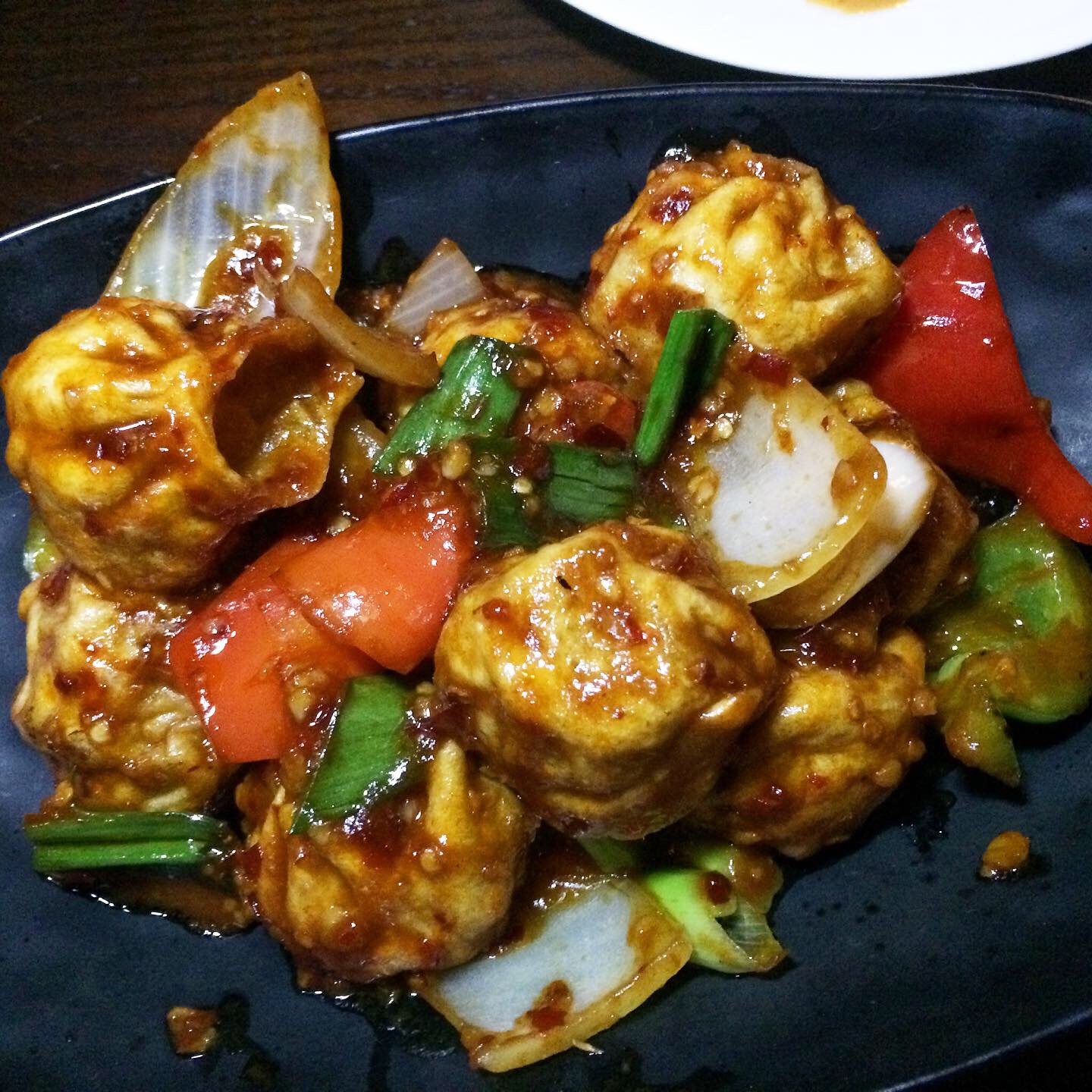 Chili Momos with Pork. If you’re going to do Himalayan food, then you’re going to do momos in one form or another. These crunchy (because they were fried, not steamed) yumballs were slathered in that medium spicy chili sauce with red and green peppers, onions, and scallions rounding out the dish. Good way to start things off. 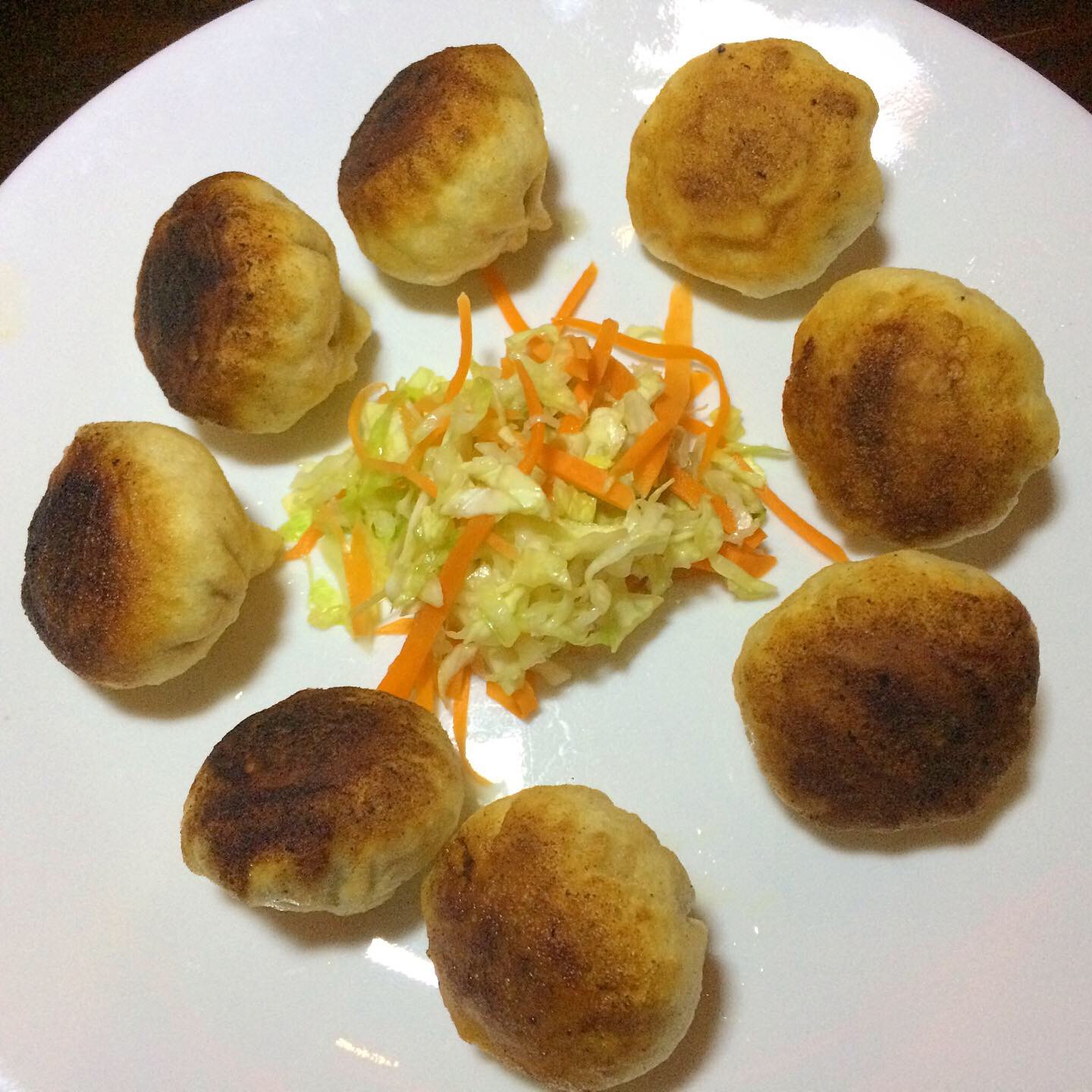 For a change of pace from steamed momos, we ordered Fried Momos with Chicken. Good, but they benefited from this array of sauces: 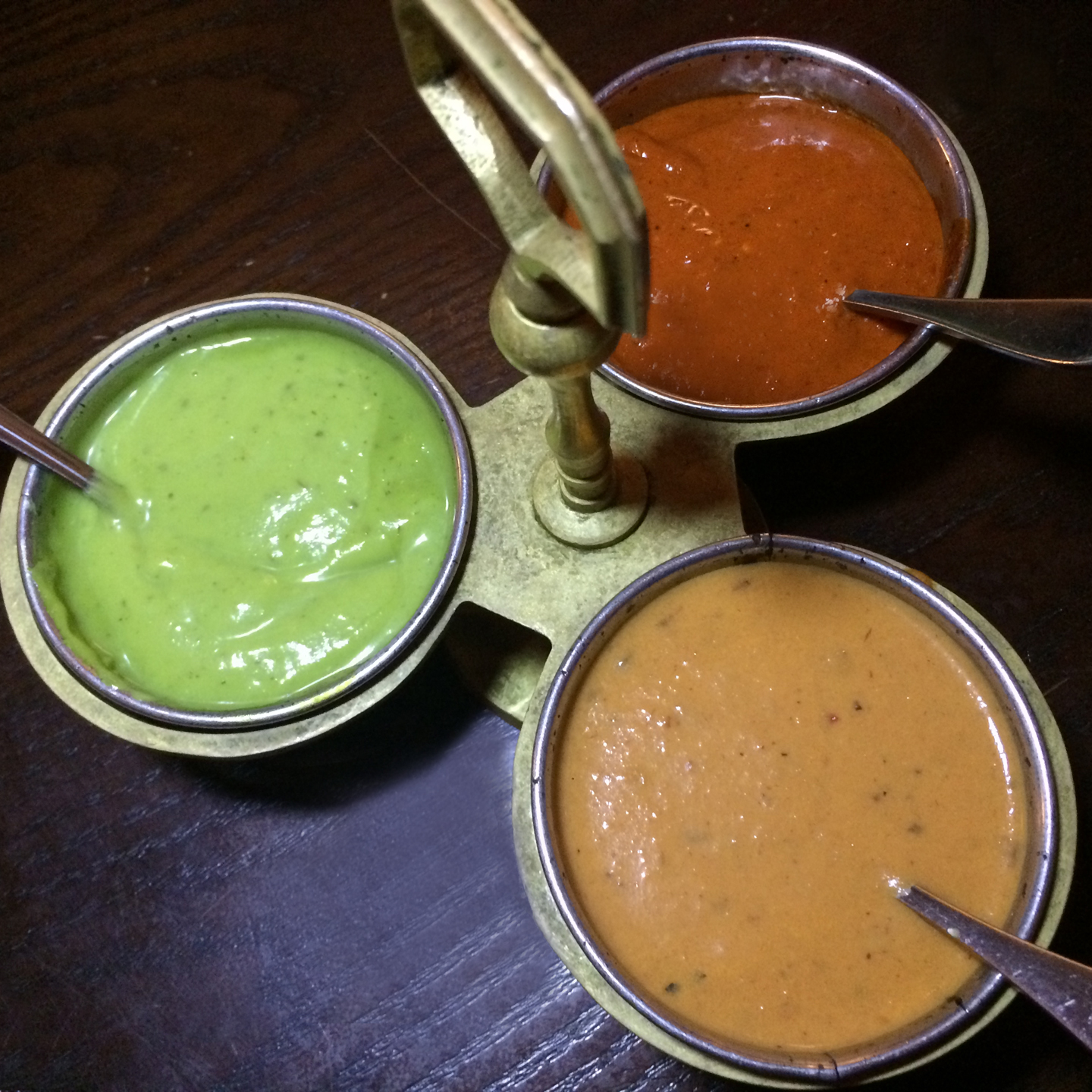 Akin to traffic light protocol, green was the mildest (avocado!), red warned us of spicy chili, and the yellow (well, sort of orange really, but I’m taking license – literary, not driver’s) fell somewhere in between. 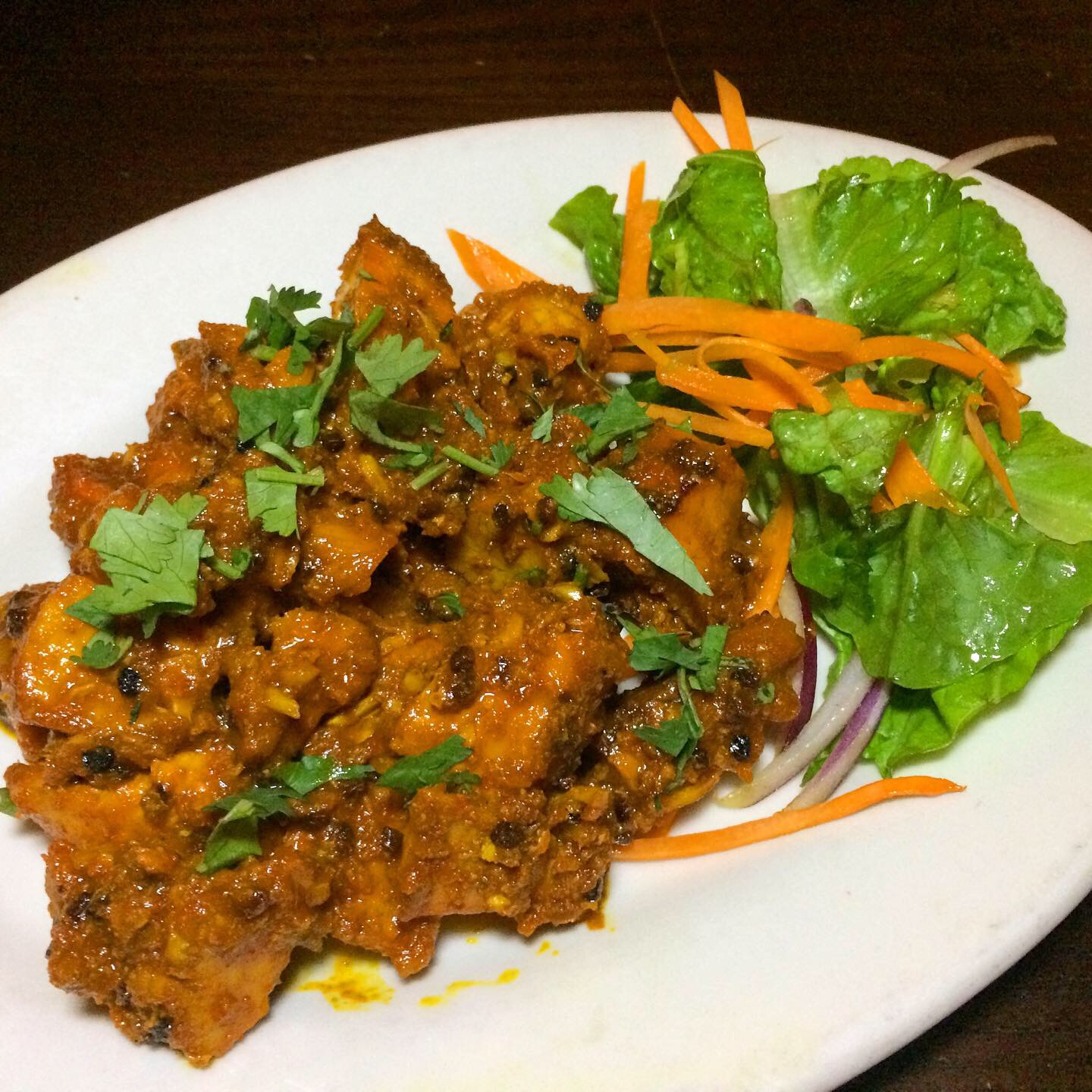 Choila. A cold appetizer of chicken chunks marinated with onion, garlic, ginger and mustard oil. We enjoyed this particularly spicy Nepali dish so much that we ordered two. 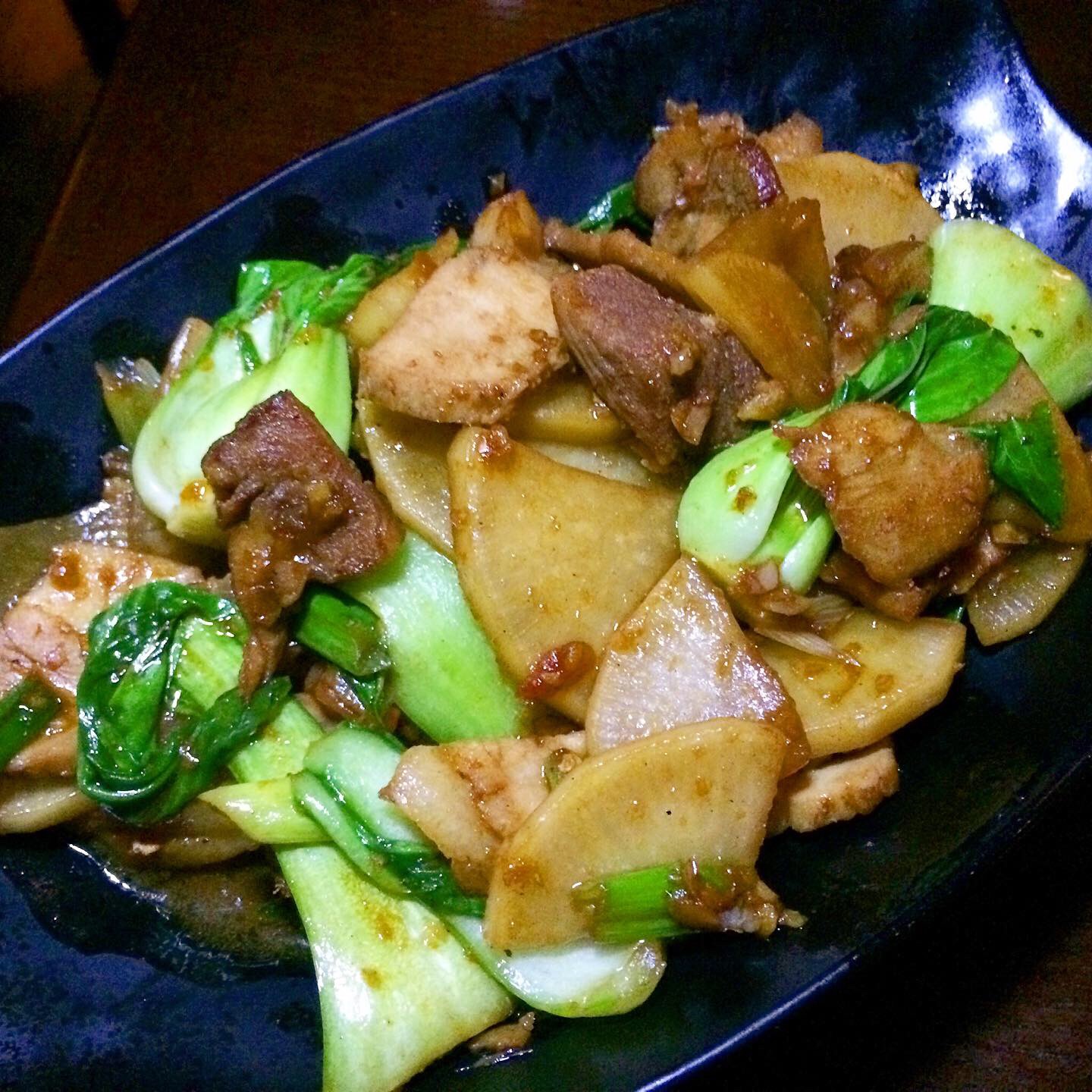 Pork Labsha is a Tibetan radish curry; the word labu refers to daikon. The sweet pork contrasted perfectly with the slightly bitter daikon in this home-style dish – not spicy but quite good. 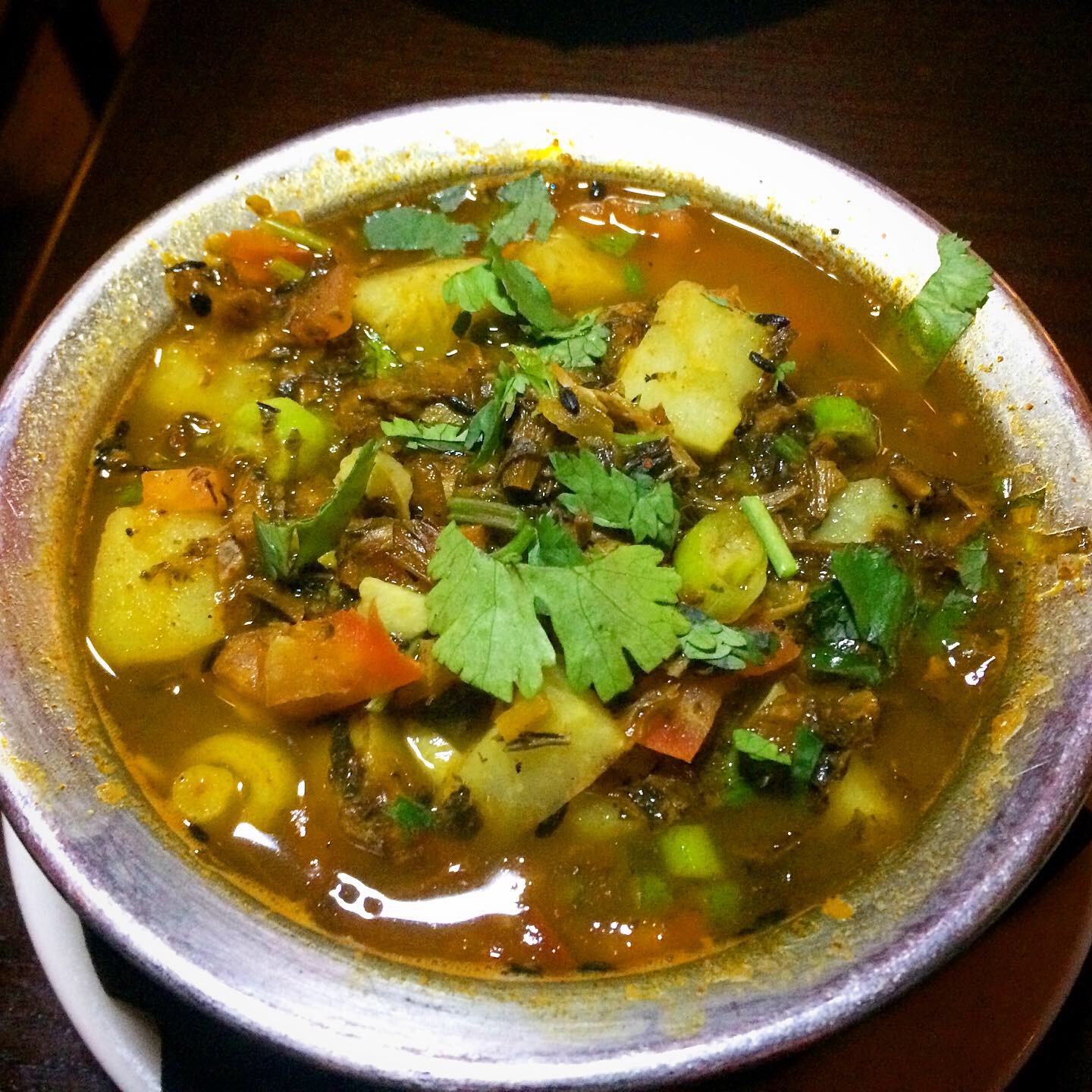 Gundruk Ko Takari. Gundruk is a fermented mustard green curry, a signature dish from Nepal. We opted for the vegetarian version which highlighted dehydrated potatoes and mushrooms. Kinda funky but in a good way, and a proper contrast to everything else we enjoyed that evening. 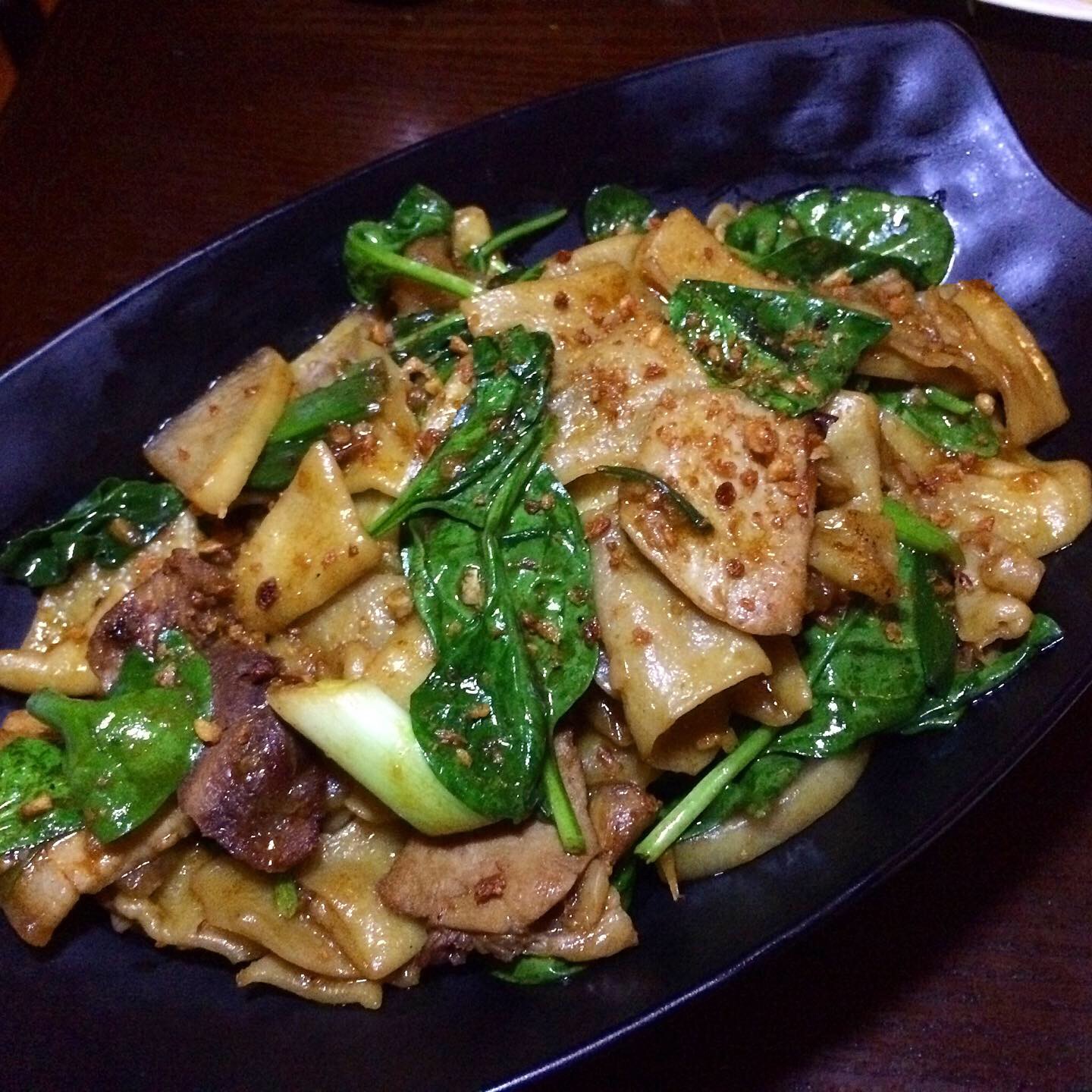 Fried Thenthuk. Pan fried Tibetan flat hand pulled noodles with pork, daikon and bok choy. Thenthuk noodles often show up in soups, but this stir fry was welcome in the context of our dinner. 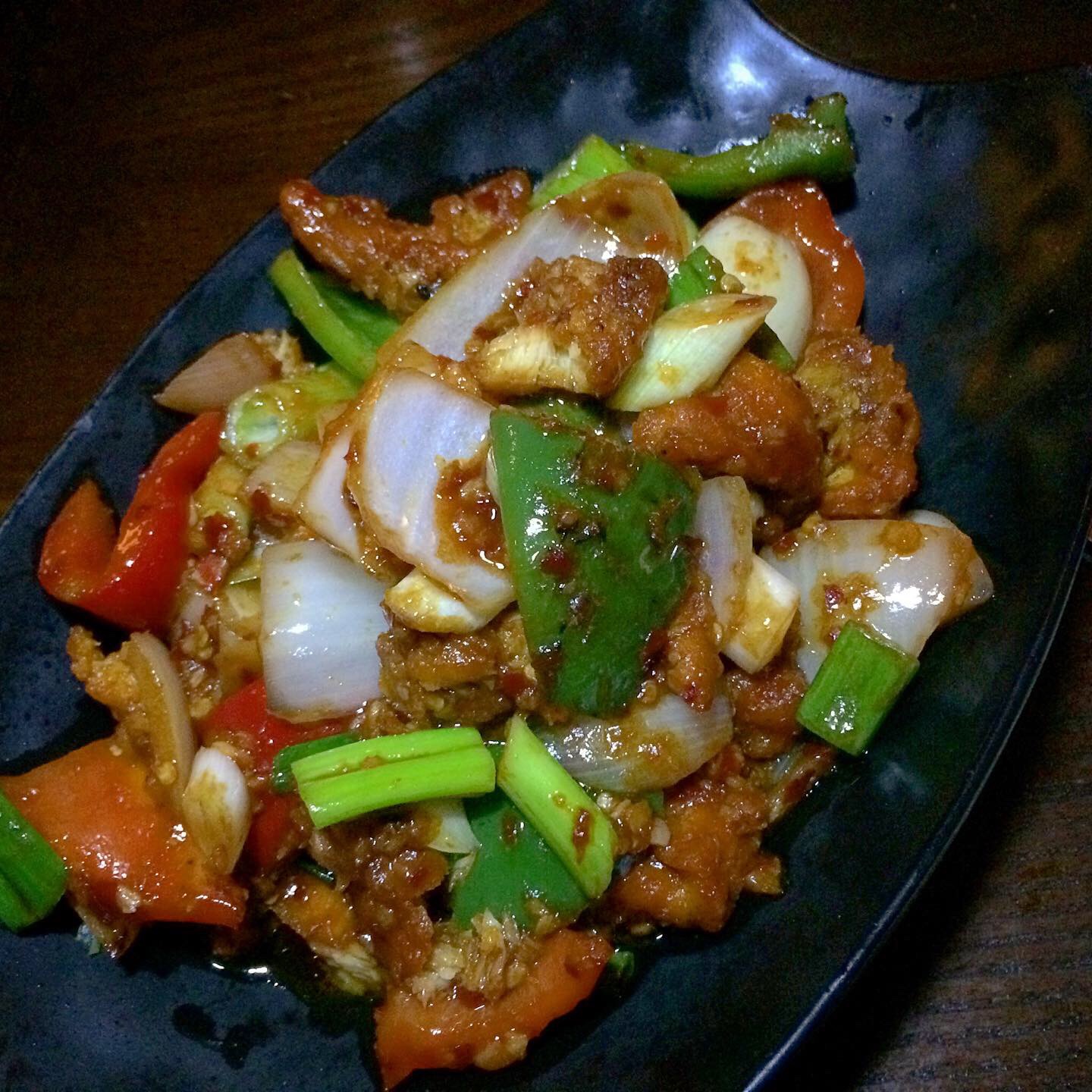 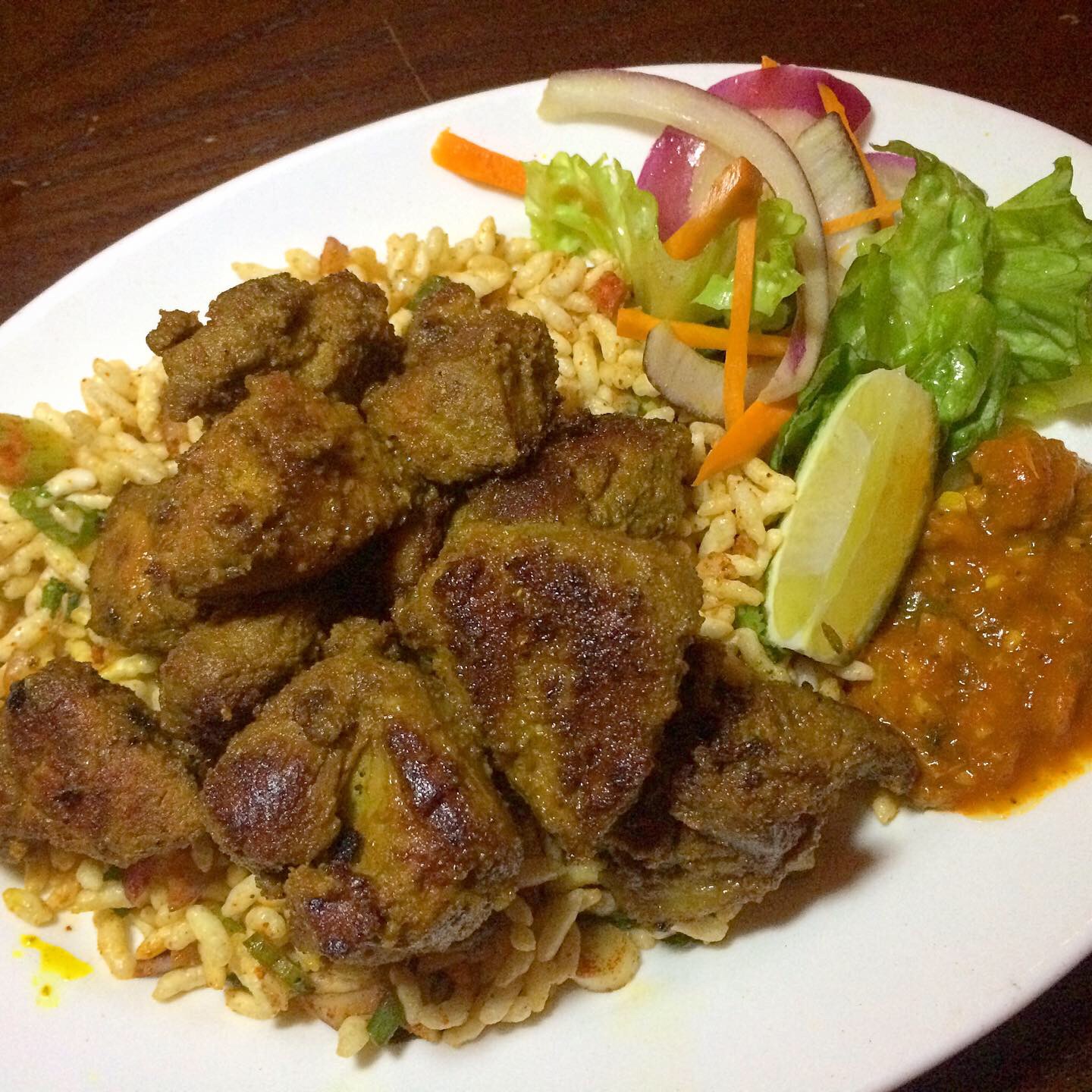 Sekuwa. From the Nepali side of the menu, tender lamb, marinated and charcoal grilled, served over crispy puffed rice. A fine example of the Maillard reaction; no complaints.

Alas, I didn’t get a photo of the Nepali Khasiko Sukka Masu, dry goat curry, but it was excellent – good to know in case you head out to Himalayan Yak.