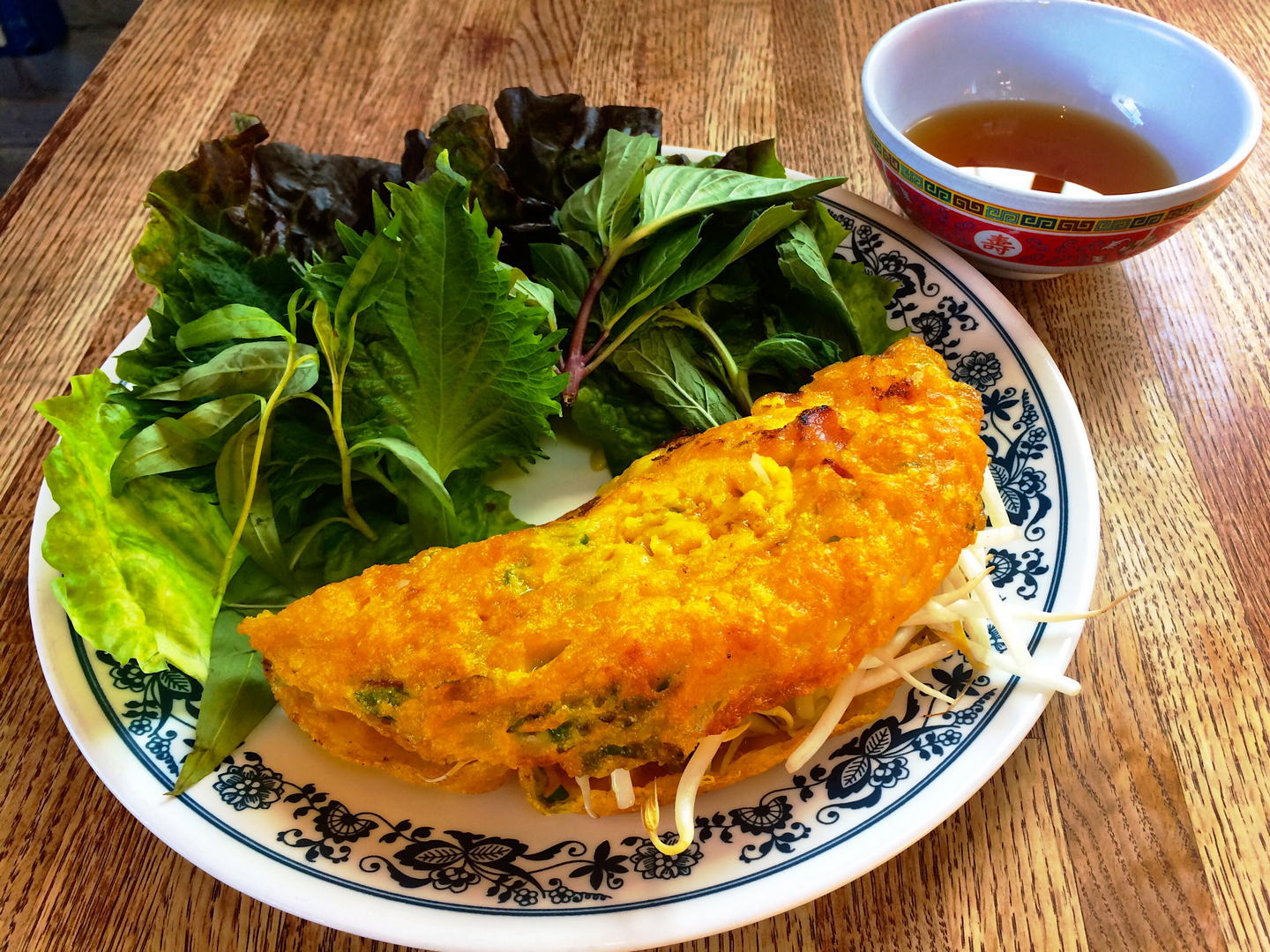 We started with Bánh Xèo, a crispy rice flour and turmeric crêpe stuffed with heritage bacon, wild prawns, and bean sprouts, served with lettuce and herbs. The word bánh means cake and xèo means sizzle, echoing the sound the batter makes when it hits the hot skillet. A classic, perfectly executed. 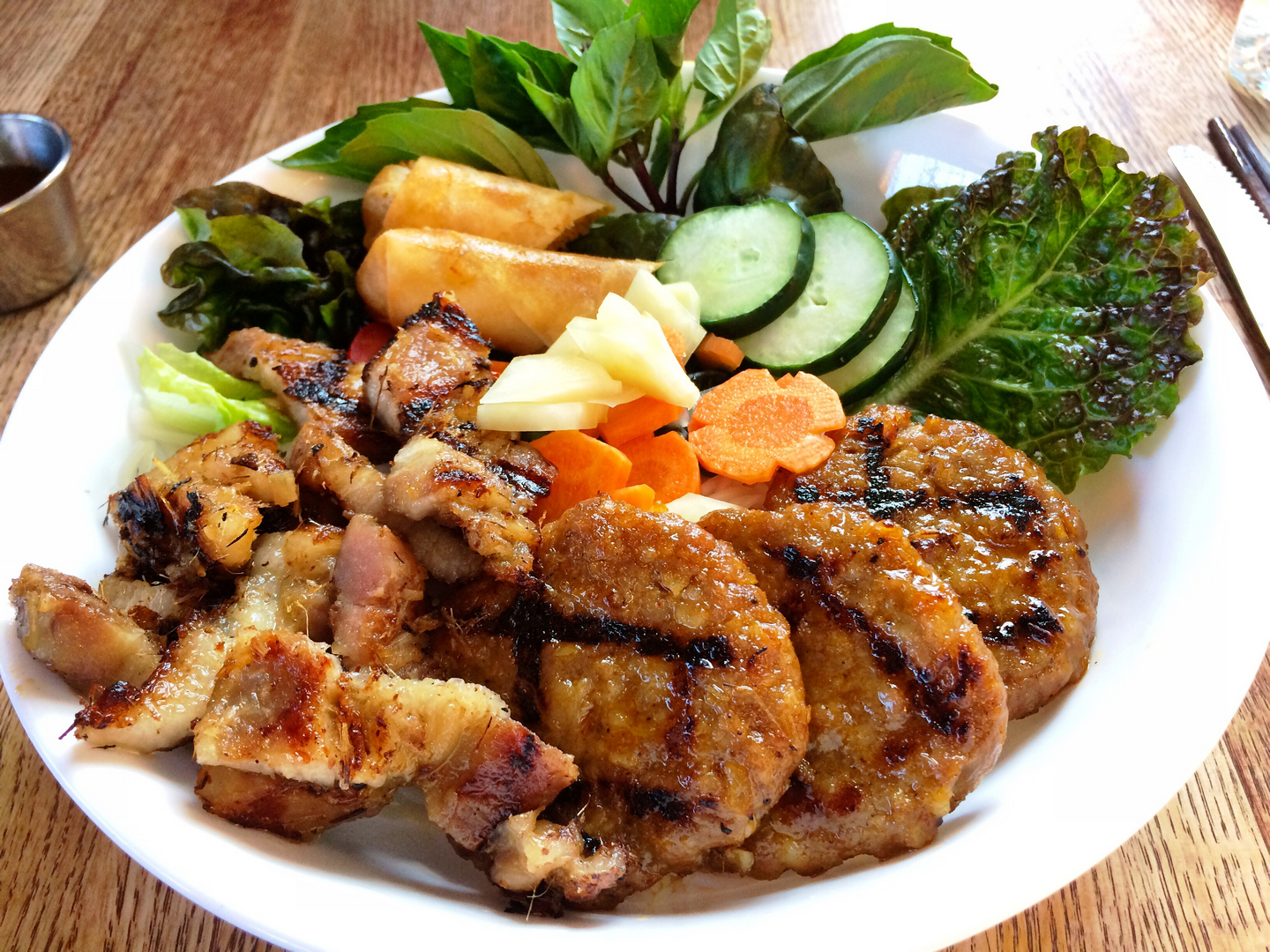 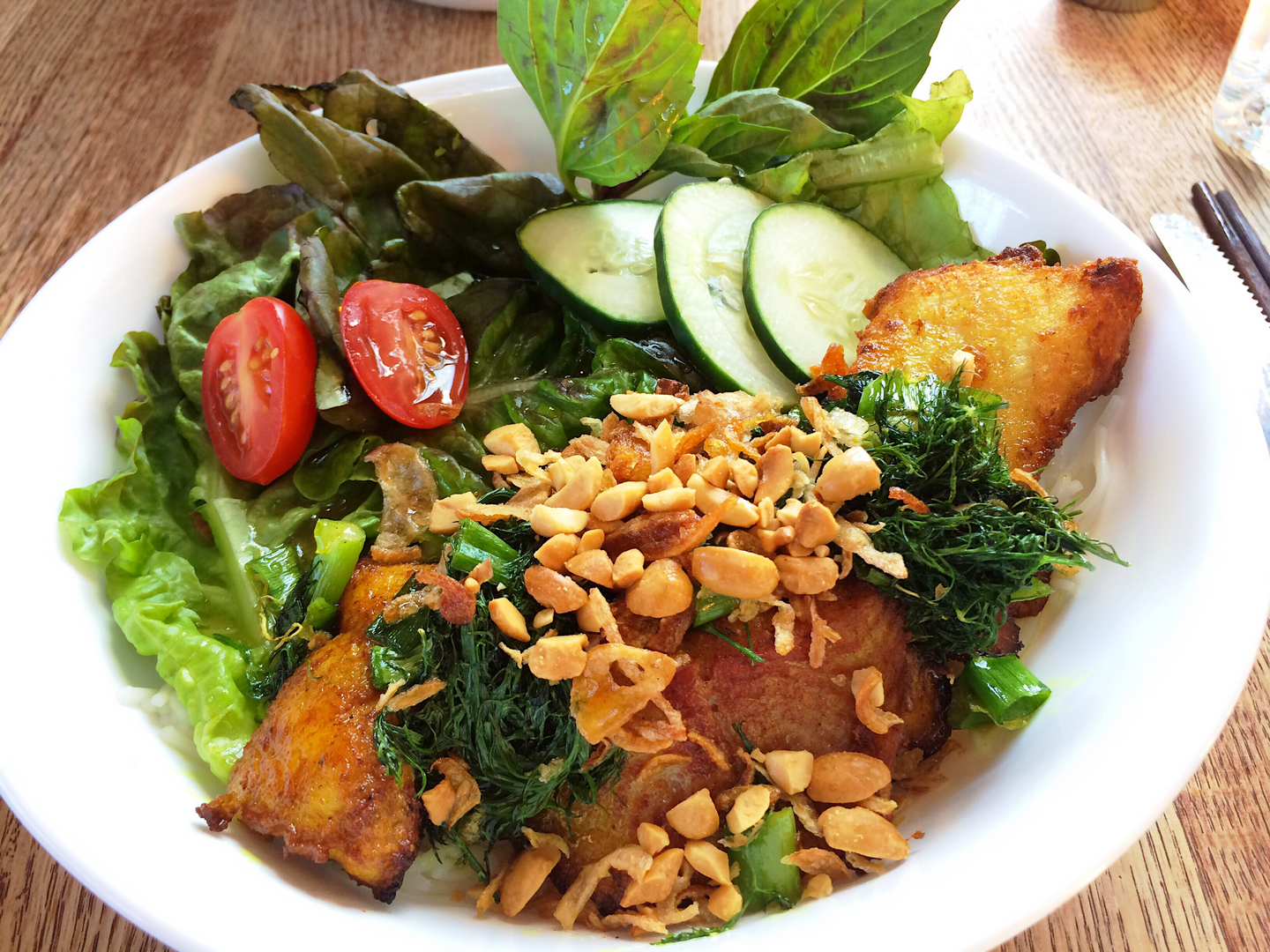 Chả Cá Lã Vọng – Turmeric laced wild blue catfish with vermicelli, peanuts, dill and basil. Certainly not street food, this one is more likely to be found in restaurants; another outstanding rendition from Bunker.


Bunker is located at 99 Scott Ave in Bushwick, Brooklyn.

Part of what I’m calling the “Golden Oldies” series: photos I had posted on Instagram in bygone days that surely belong here as well, from restaurants that are still doing business, still relevant, and still worth a trip. This one originally appeared as two posts, published on March 28-29, 2018.

Ever been up for Southeast Asian food but couldn’t decide which cuisine would best tickle your tastebuds? Then Wok Wok Southeast Asian Kitchen, 11 Mott Street, Manhattan, has your answer with its dizzying array of Southeast Asian fare. They cover a lot of territory serving up dishes from Malaysia, Thailand, Indonesia, Vietnam, Philippines, India, Singapore, and various regions of China, and perusing their colorful menu is like taking a survey course in popular street food of the region. 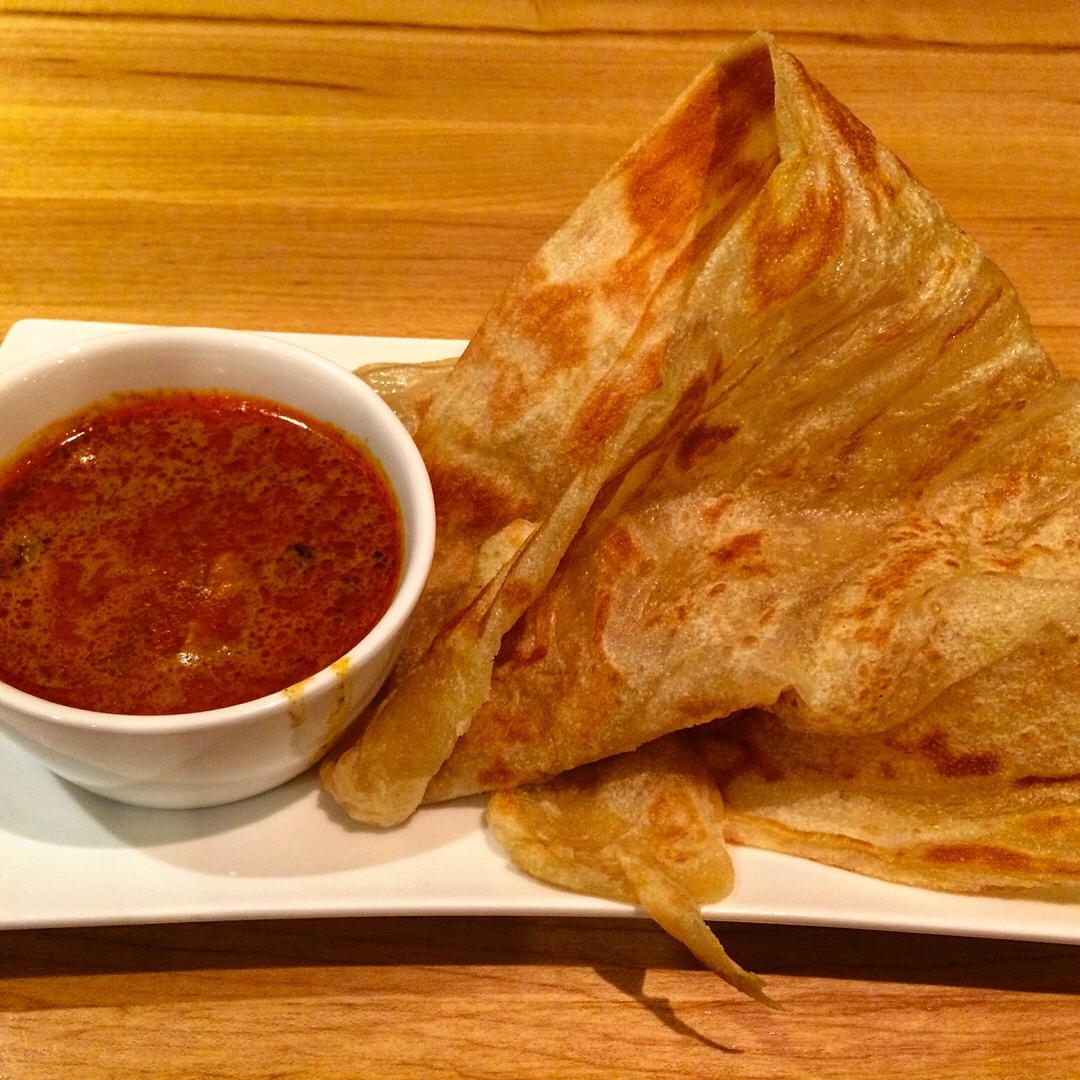 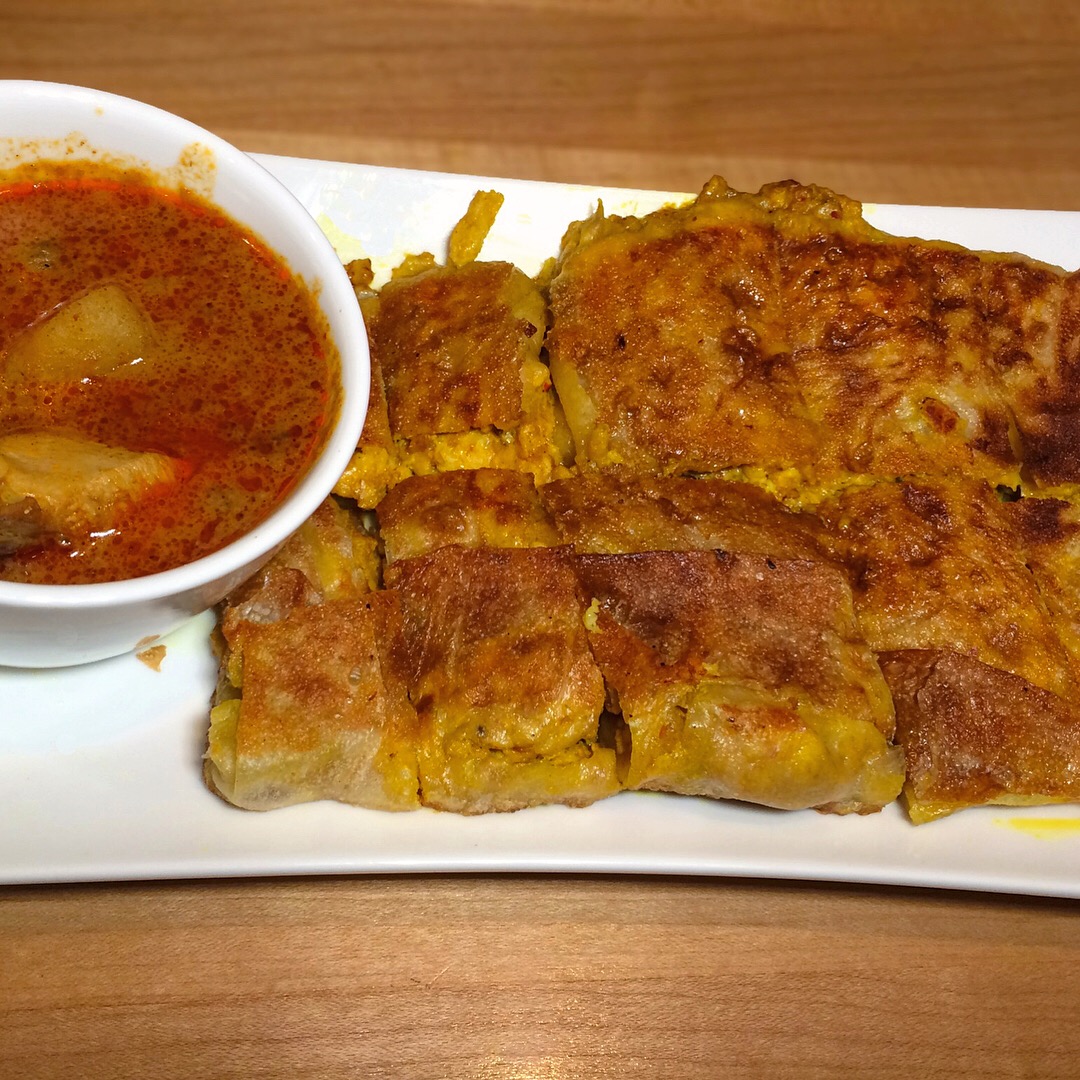 Roti Murtabak, another crepe, this time folded around a spiced chicken and egg mixture and also accompanied by the potato chicken curry, had a pleasantly spicy little kick to it. A cut above what we’ve had elsewhere.

Our soup course was Hakka Mushroom Pan Mee, a study in contrasts. Springy handmade noodles topped with silvery crispy dried anchovies, earthy mushrooms, chewy bits of minced pork, and tender greens in a clear broth that was richer than I had anticipated. 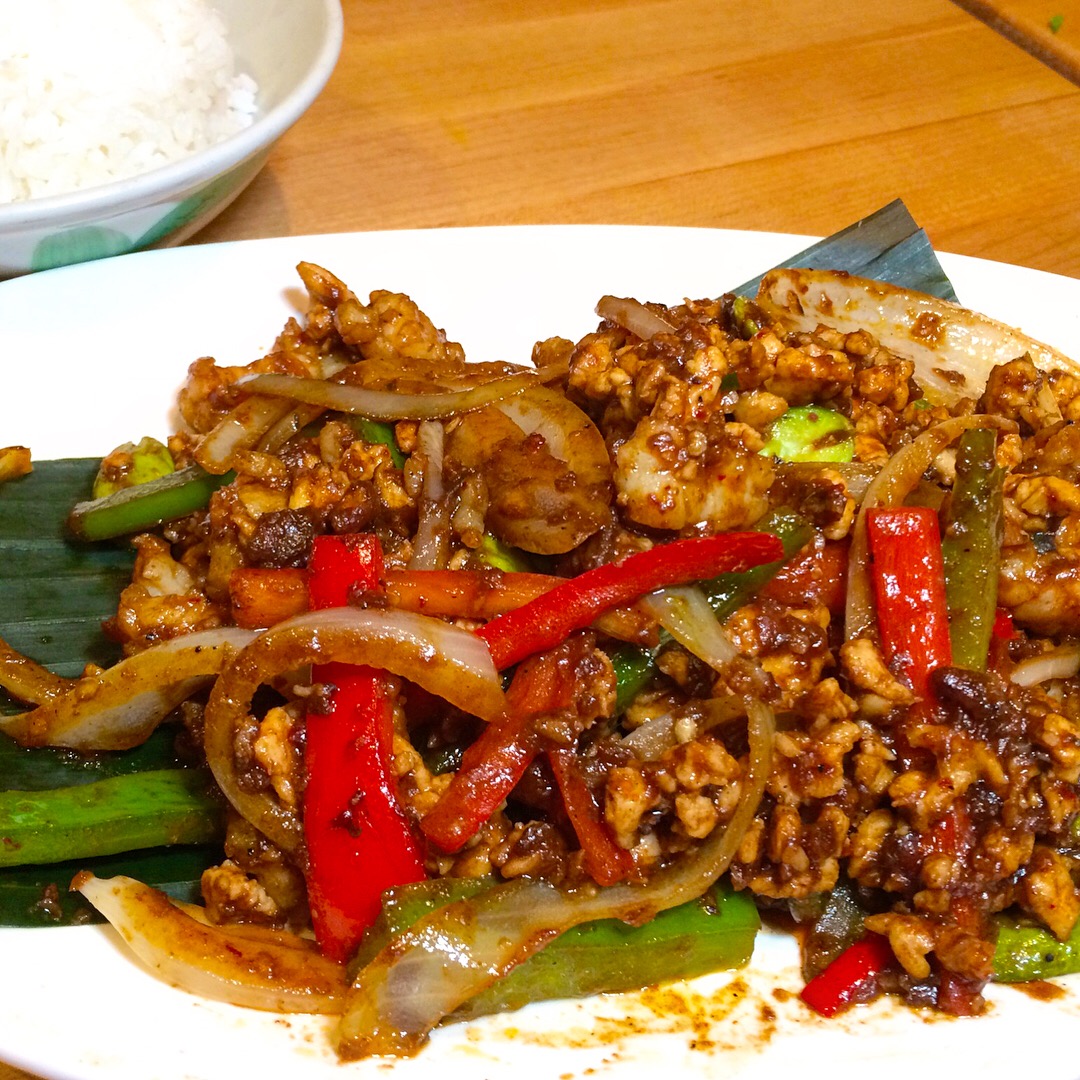 Spicy Minced Chicken, Shrimp and Sato – ground chicken and chunks of shrimp with sato cooked in a belacan based sauce. Sato, also known as petai and sometimes stink bean, is a little bitter, a little smelly perhaps, but quite enjoyable. Belacan is fermented fish paste; most Southeast Asian cuisines have their own spin on this pungent condiment, and it’s particularly characteristic of Malaysian food. Maybe it’s an acquired taste, but I think it imparts a subtle flavor that renders this dish delicious. 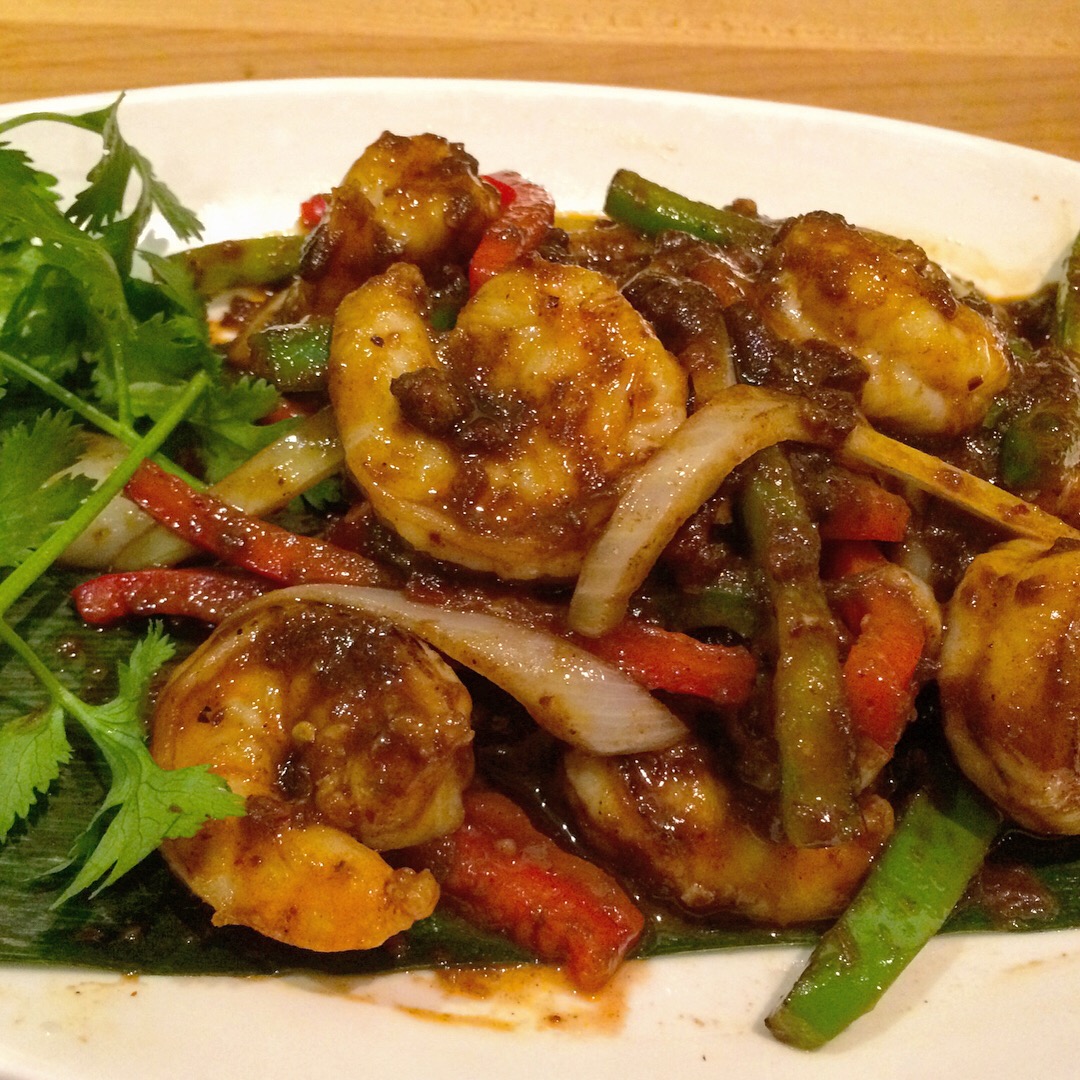 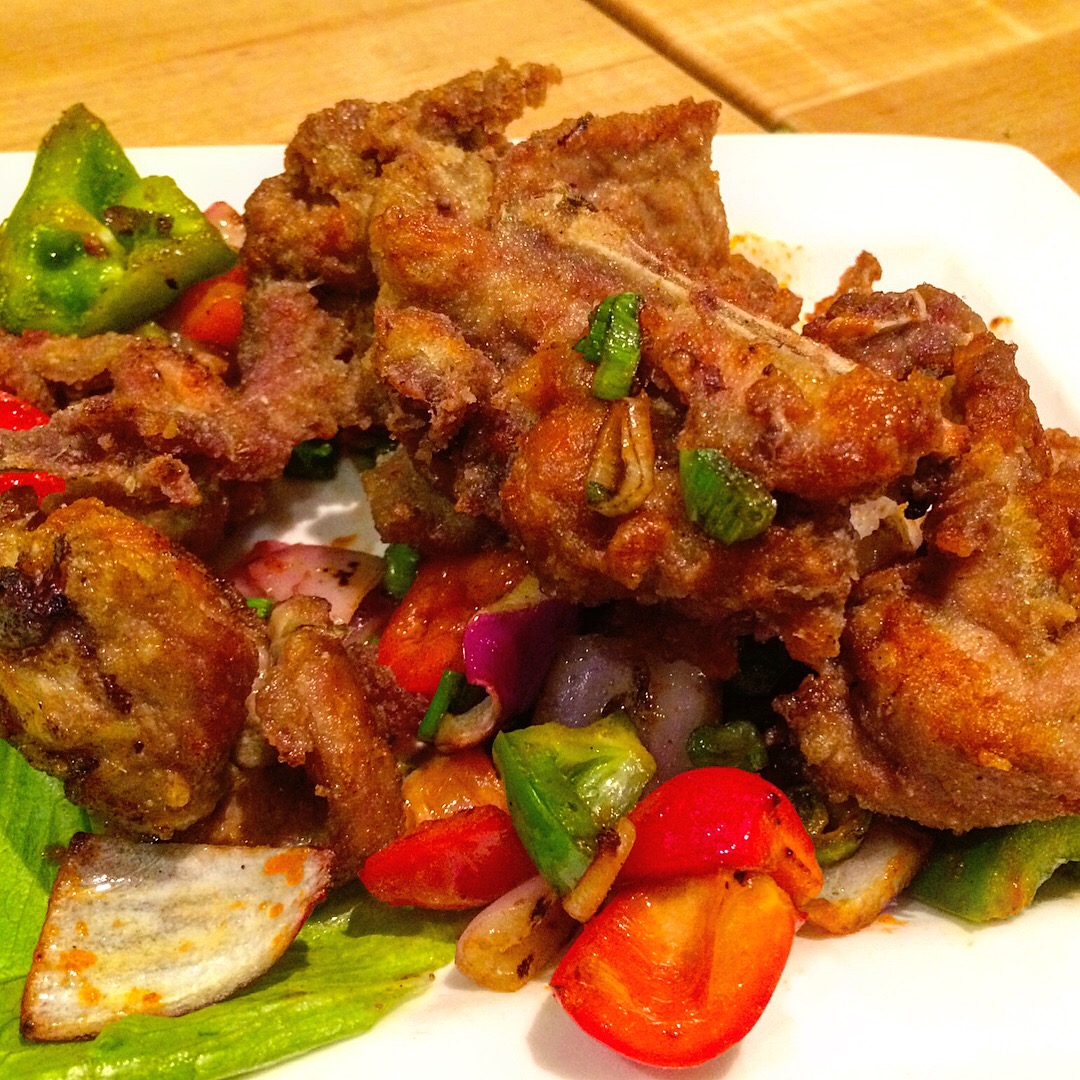 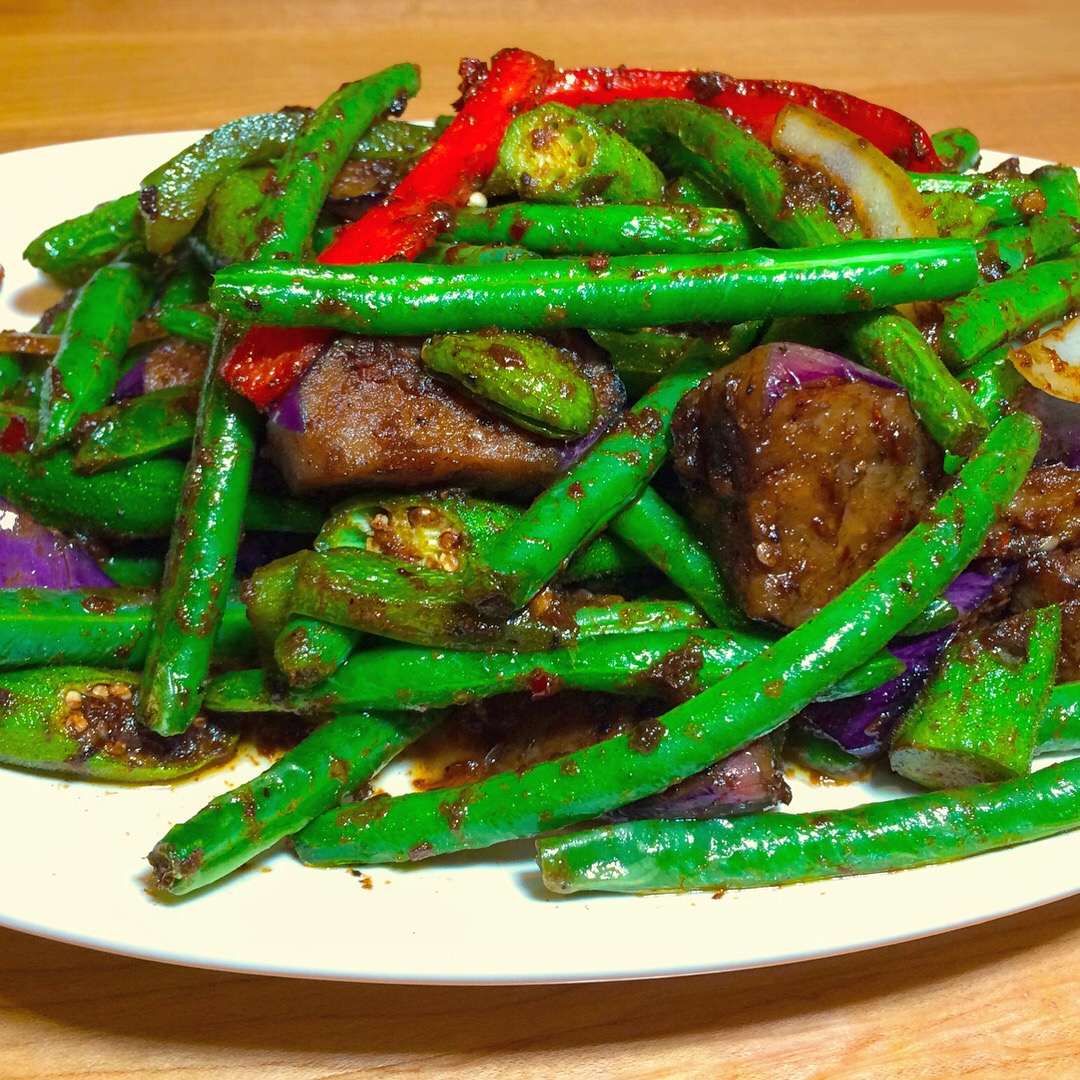 Four of a Kind Belacan – to me, the only thing these four vegetables have in common is that they’re all green! Beyond that, the flavors, textures, and even the shapes differ radically – and that’s a good thing in my opinion. String beans, eggplant, okra (not at all slimy), and sato are united by the medium spicy belacan sambal; stink bean and belacan play well together and the combination is a singularly Malaysian flavor profile. 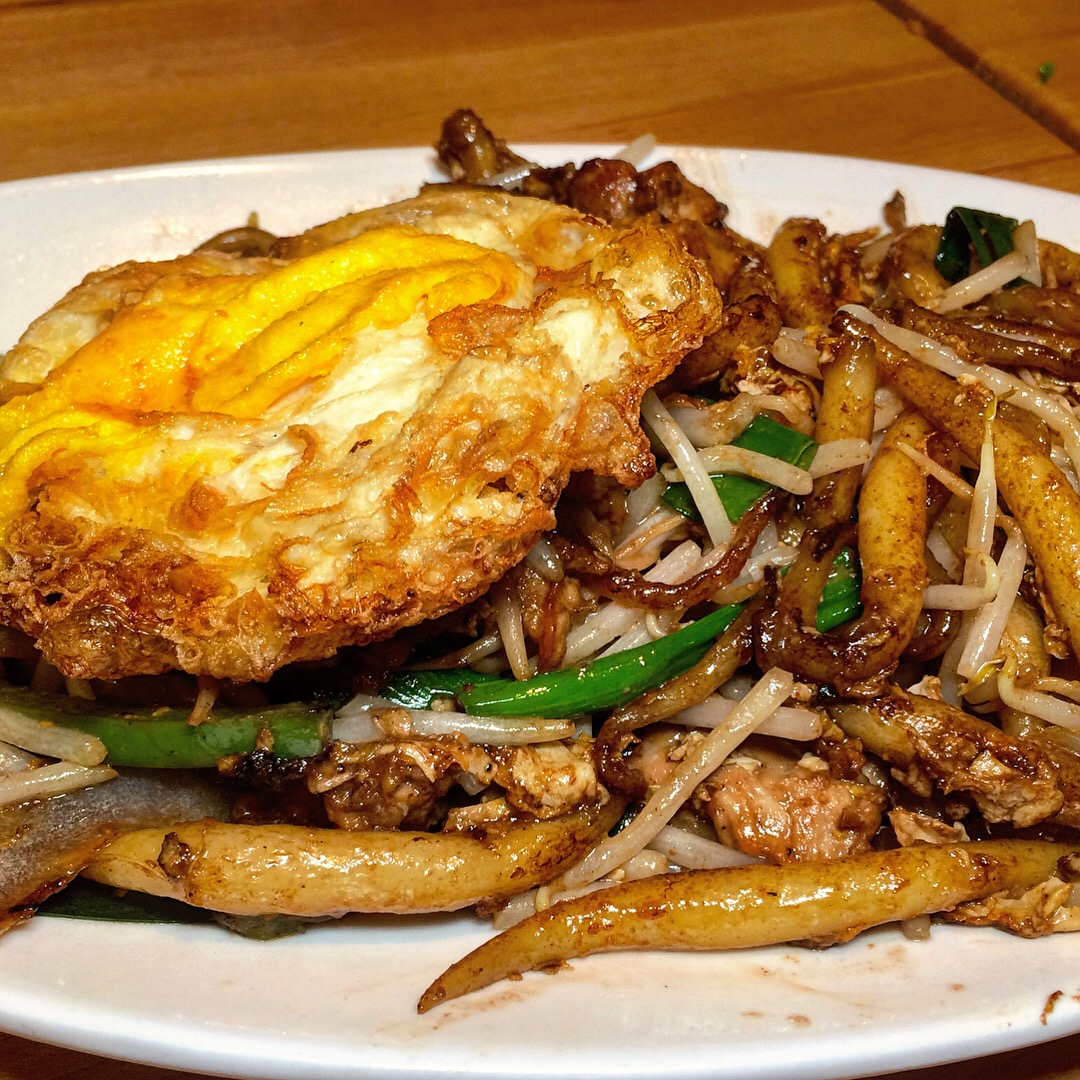 Stir Fry Pearl Noodle featured eggs, bell pepper, Spanish onion, scallion, and bean sprouts with pork. This is actually one of my favorite dishes and not all that easy to find. Pearl noodles, sometimes known as silver noodles, silver needles, and other fanciful names, are chewy rice noodles that are thick at one end and then taper to a point at the other (look closely at the little tail at the bottom of the photo and you’ll see why one of those fanciful names is rat tail noodle). They’re generally stir-fried to pick up a little browning and a lot of wok hei (aka wok qi, the breath of the wok) that ineffable taste/aroma that can only be achieved by ferocious cooking over incendiary heat. Not at all spicy, this one is always a favorite.

Due to a communications mix-up, a couple of dishes came out that weren’t what we ordered. Everything we tasted that day was very good, but I want to make sure that you don’t end up with two or three similar dishes – for example, one belacan and/or sato offering is plenty for the table – because I want you to experience a broad range of flavors, and Wok Wok is most assuredly up to the task. Choose a wide variety of disparate dishes, perhaps even from different parts of Southeast Asia, and you’ll go home happy and satisfied!


And a reminder, once again, to please SUPPORT CHINATOWN!

And while we’re on the subject of Southeast Asian desserts, a quick stop at Paris Sandwiches, 213 Grand St in Manhattan’s Chinatown, home to a variety of bánh mì, the popular Vietnamese sandwich, yielded this trio of treats – from top, clockwise: sticky rice with banana and coconut milk, sweet corn and sticky rice, and pandan tapioca pearl with banana and coconut milk. We always stop by for a bánh mì during my Manhattan Chinatown ethnojunkets because there’s even more to Chinatown than great Chinese food!

Don’t come looking for steaming bowls of pho, multilayered banh mi, or the ubiquitous bun/grilled meat/garden of herbs DIY platter; the recently opened Vietnamese restaurant Van Đa at 234 East 4th St in Manhattan’s East Village answers to its own muse. Self-characterized as “modern Vietnamese cuisine”, the menu items diverge from those you might find elsewhere and even familiar offerings display their own spin. A good part of the menu is composed of small plates with a few more substantial options to consider; all of our choices were tasty if mostly single bite morsels. 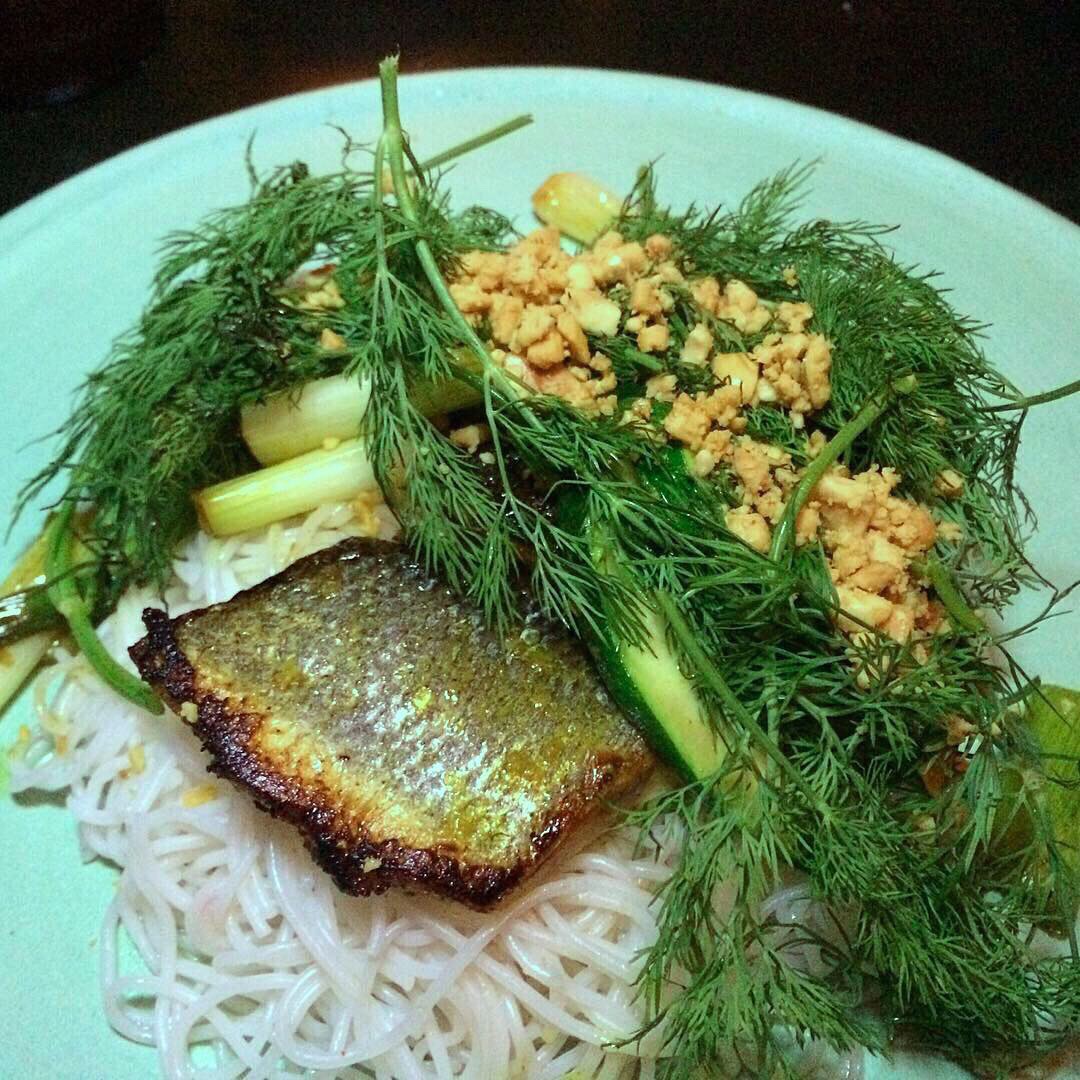 From the Hanoi column, this comparatively ample dish is Cha Ca La Vong, turmeric branzino with a heap of fresh dill, bun (rice vermicelli noodles), scallions and peanuts. It was good, but I’ve enjoyed this dish in other restaurants where the turmeric and other ingredients made a more significant statement. 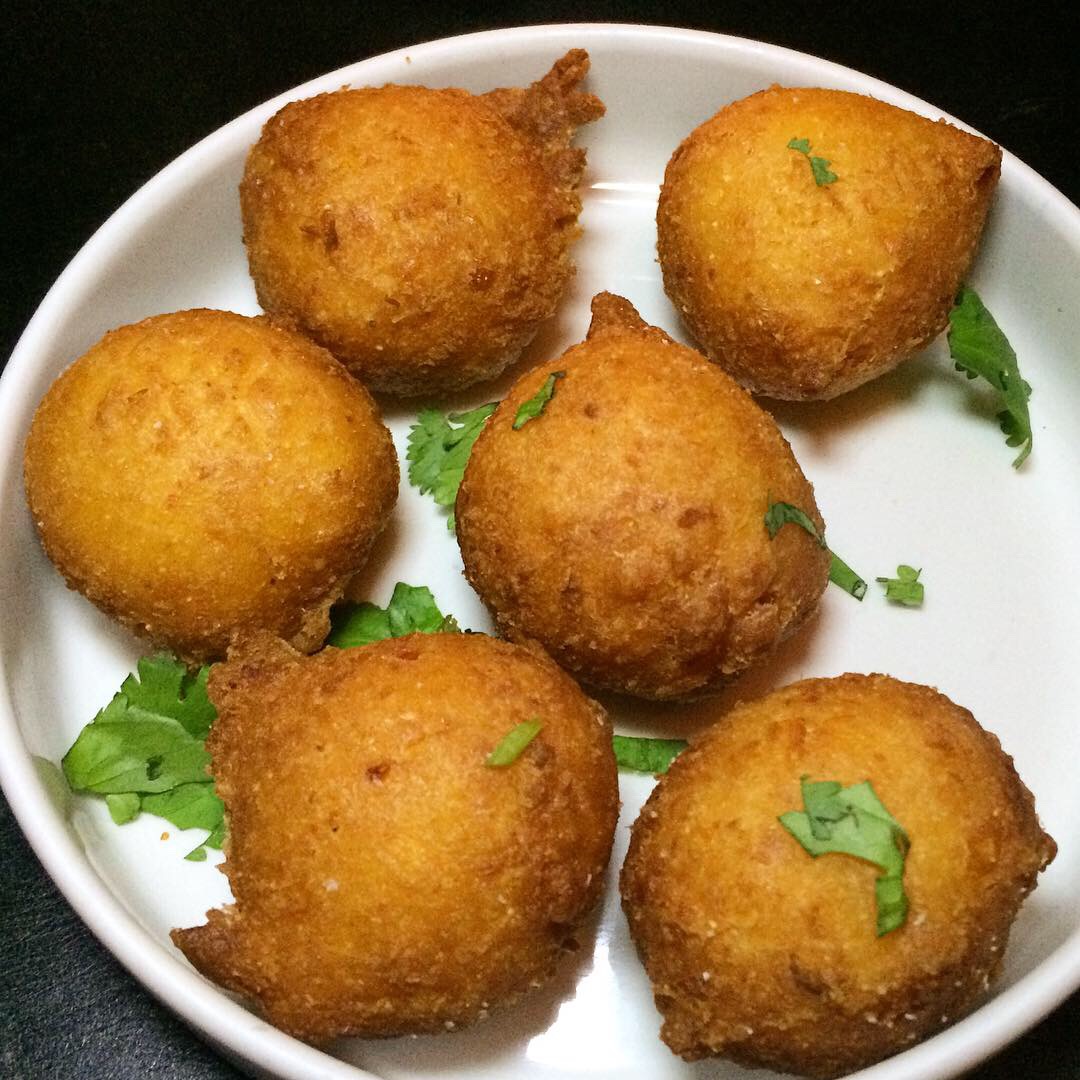 Red Curry Corn Fritters from the Street Food side of the menu were light, fluffy and a modest entry point to our meal although I don’t recall much red curry in evidence. 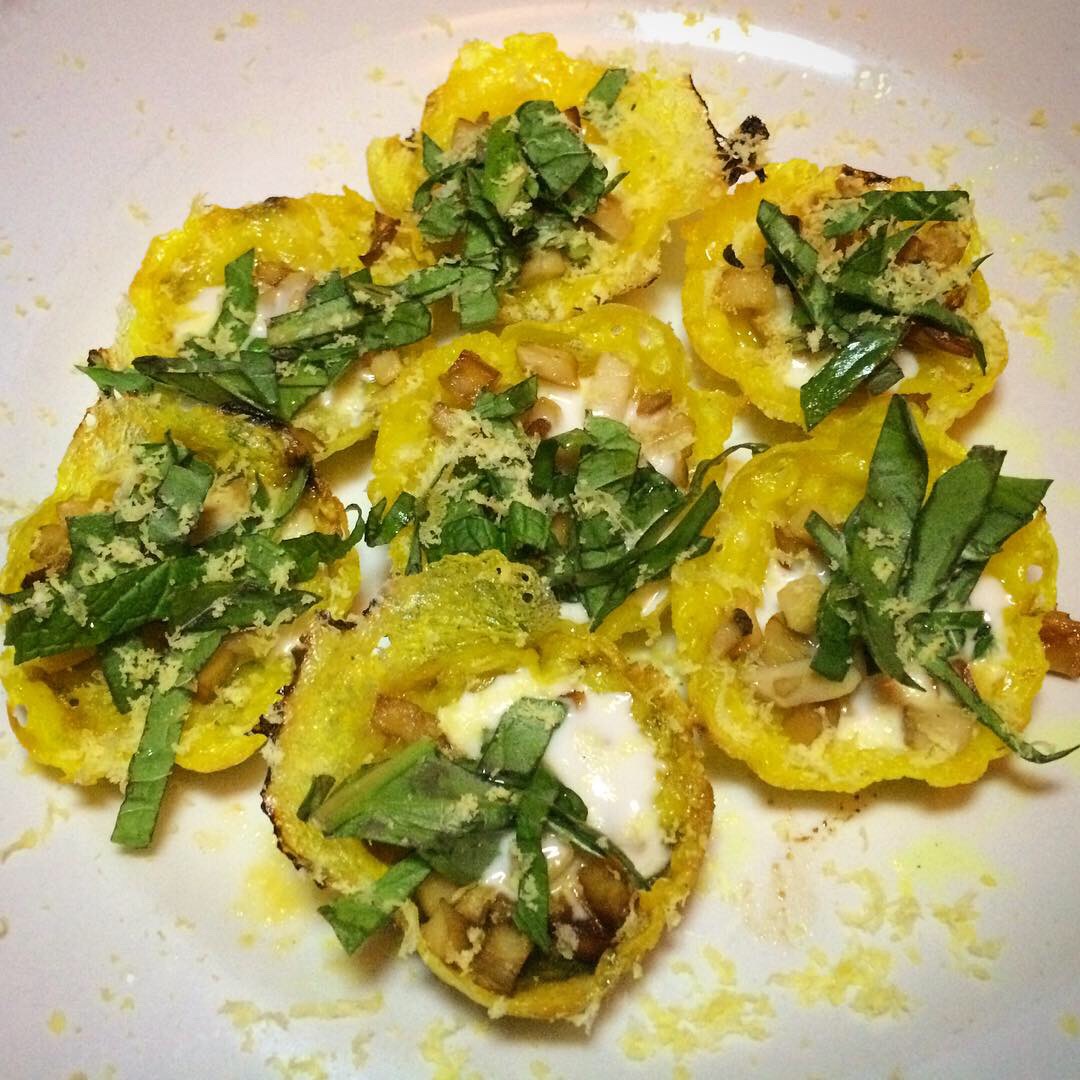 Banh Khot are described in the Hue column of the menu as turmeric griddle cakes with wild mushrooms, coconut custard, and cured egg yolk. I’m sure that’s true, but these might be better explained as bite-sized, crunchy, coconut-forward, mushroom and herb mini mouthfuls. Good stuff. 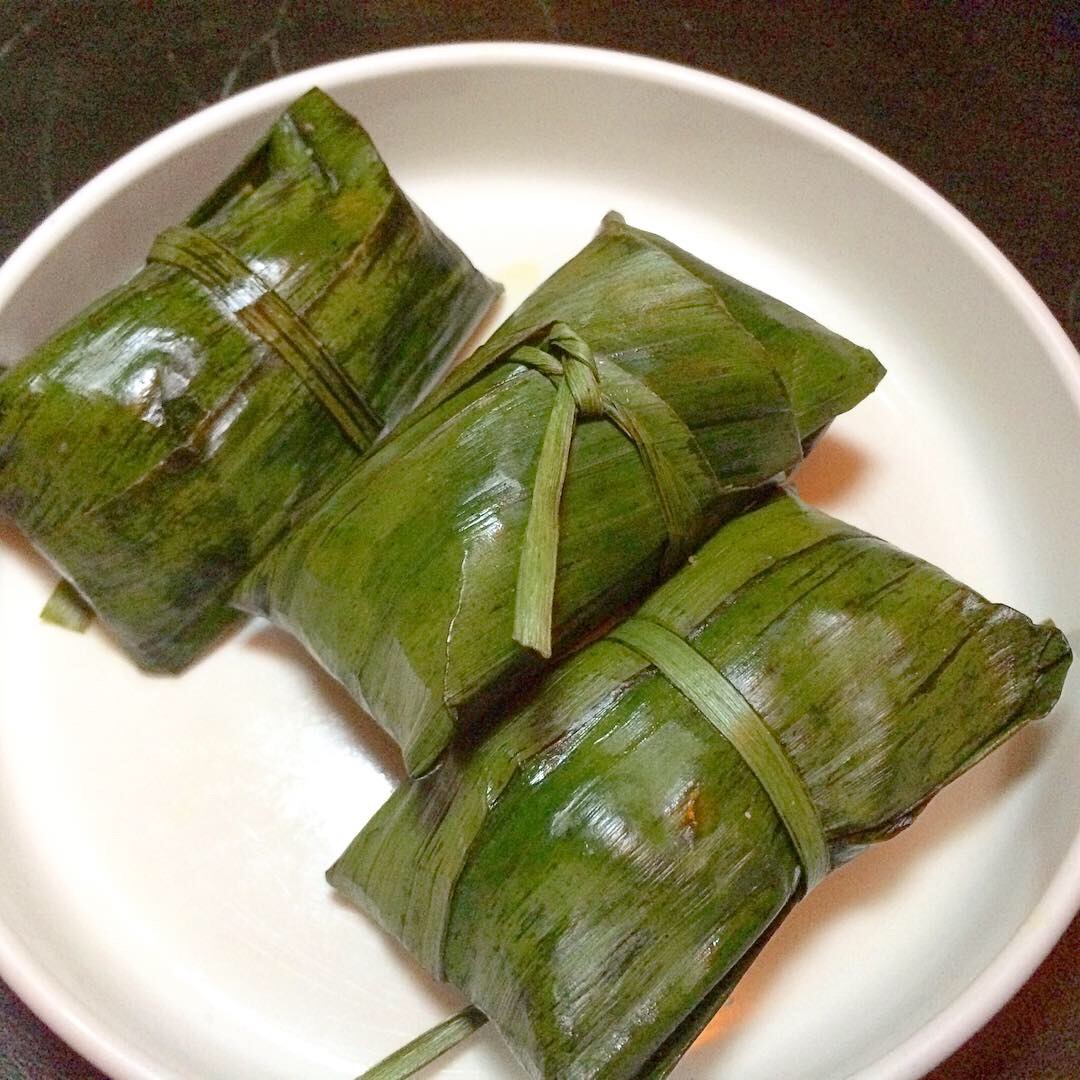 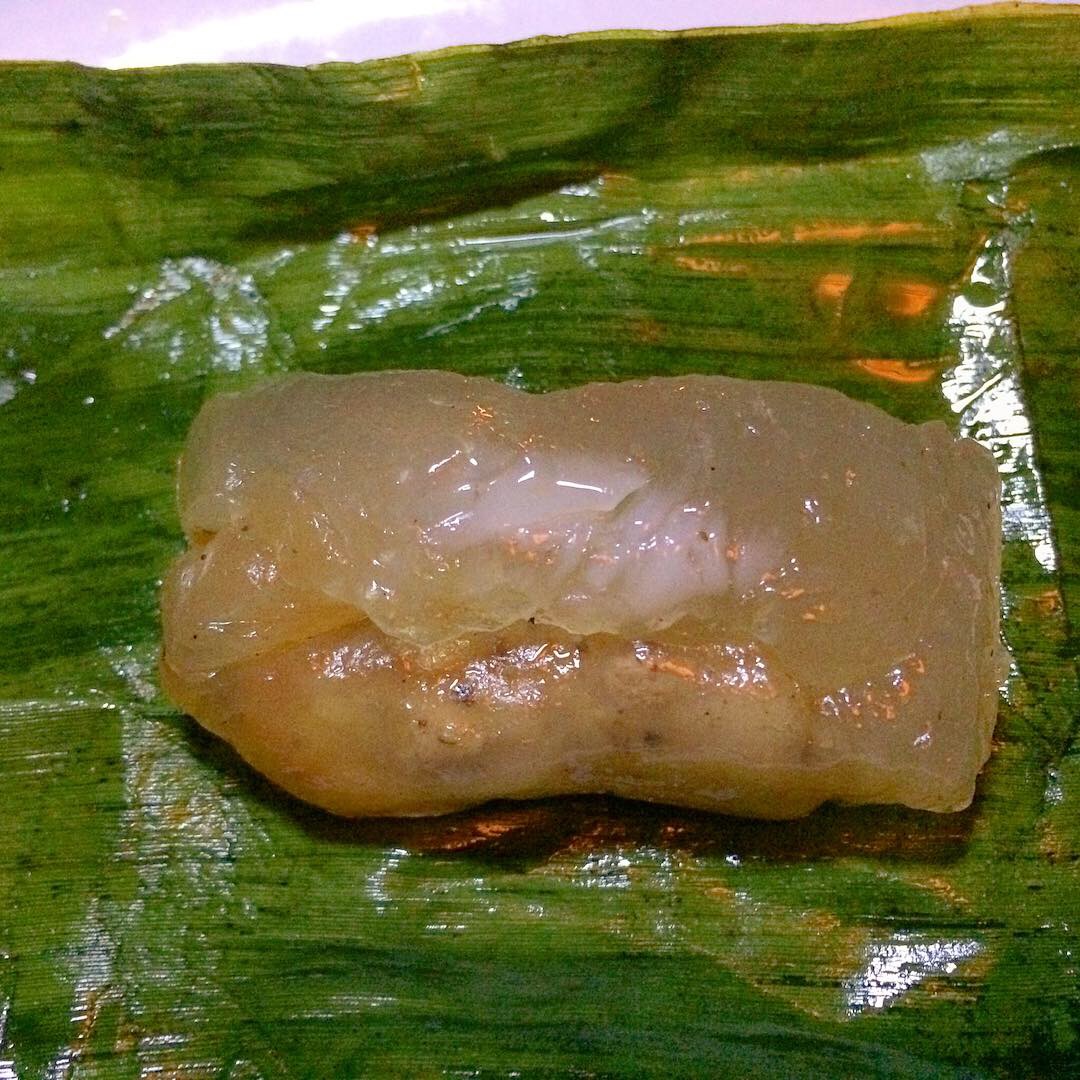 Banh Bot Loc (Hue as well) are shrimp and pork tapioca dumplings that arrive wrapped in the banana leaves in which they were steamed. Second photo shows the sticky, chewy delicacy lurking within. Also good stuff. 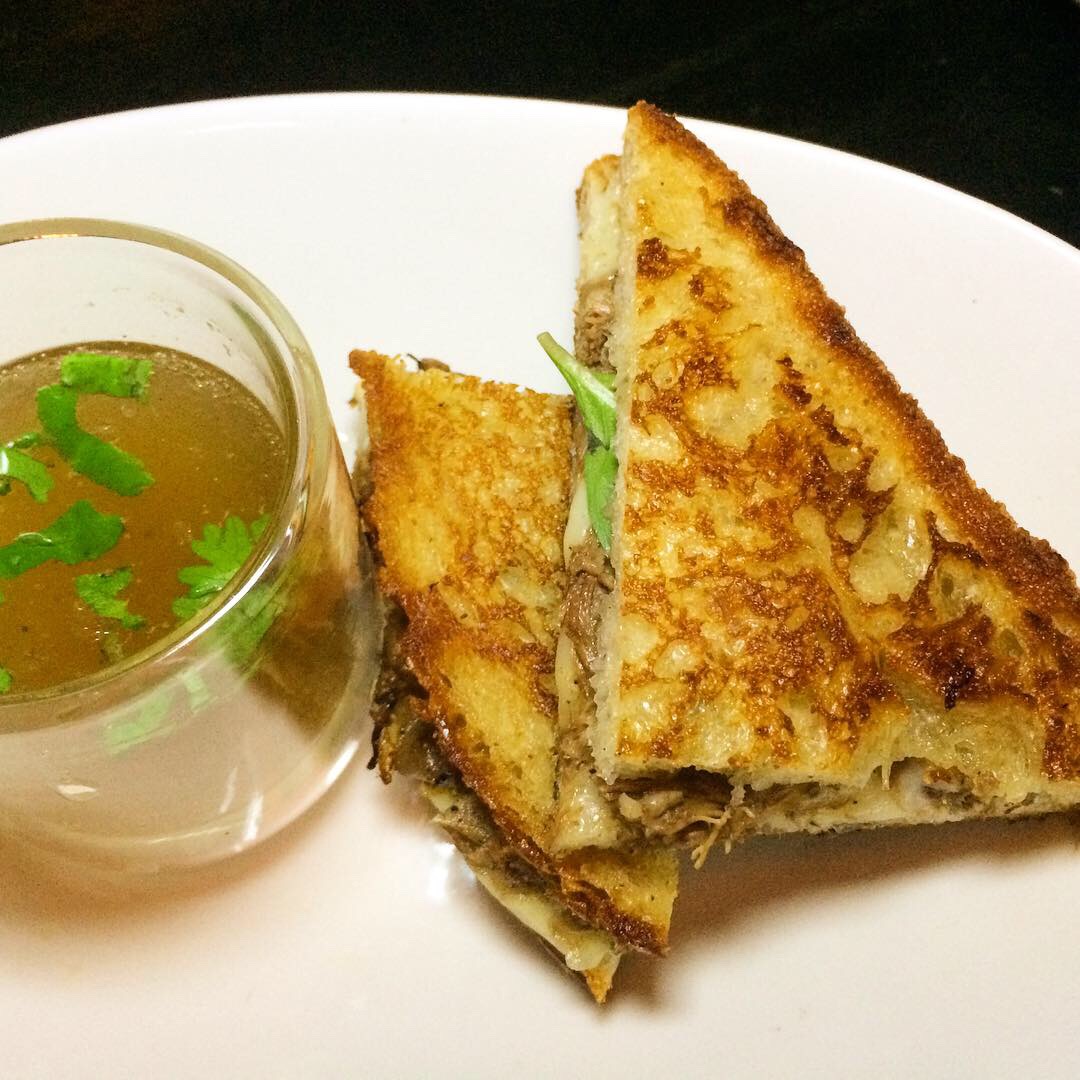 Pho Short Rib Grilled Cheese sounded to me like it might actually be a sandwich and indeed a pair of slender, crunchy, triangles featuring pho beef, caramelized onions, and melted provolone came to the table with a shot of pho broth for company. Since Vietnam had been colonized by France at one time, I surmised that the shot was less about something to swig and more likely Van Da’s answer to the French dip. But perhaps not. 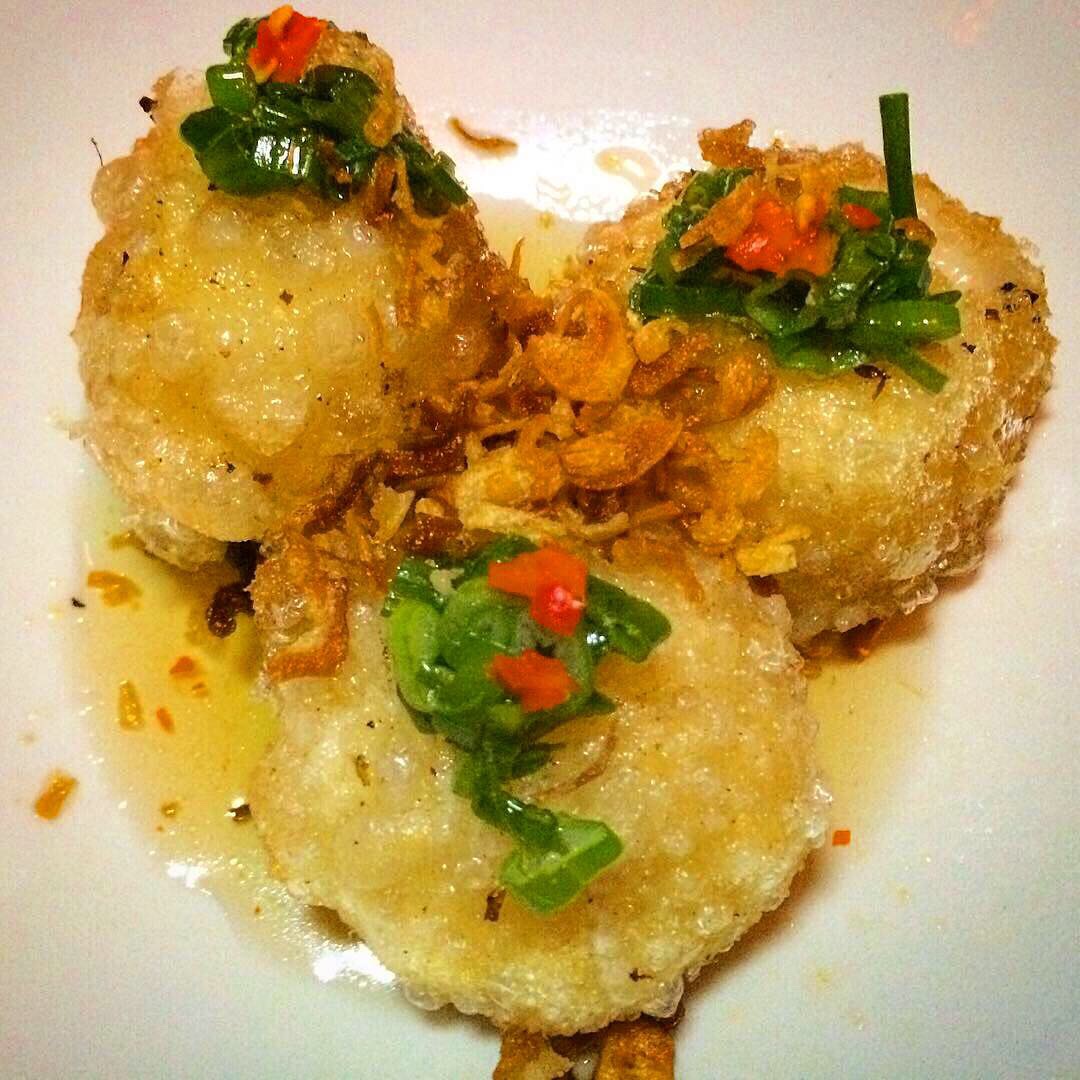 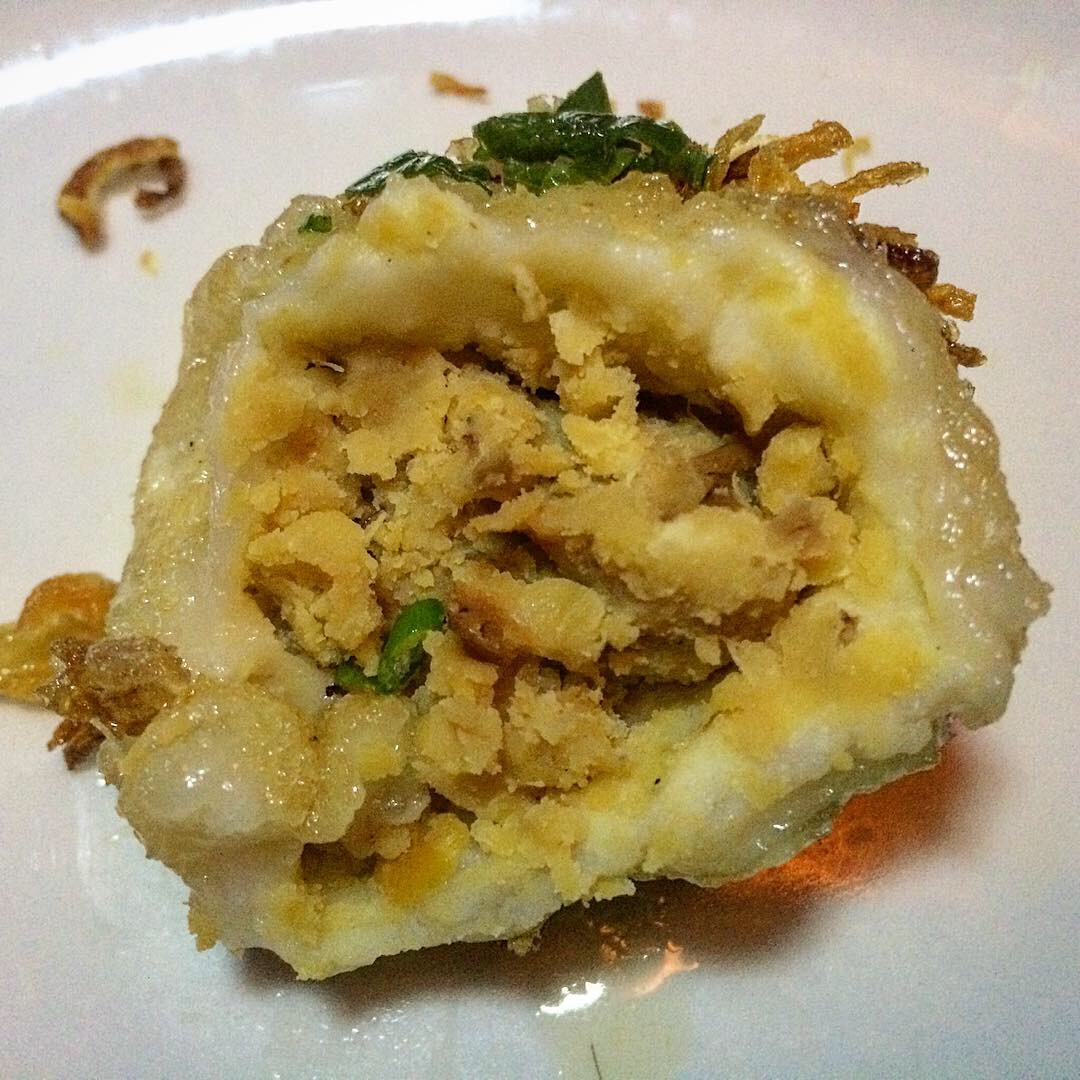 Banh It Ram are mochi dumplings, crispy surface, chewy just beneath, filled with a mung bean mash and topped with fried shallots. Gotta love the textural interplay. See second photo for the inside scoop. 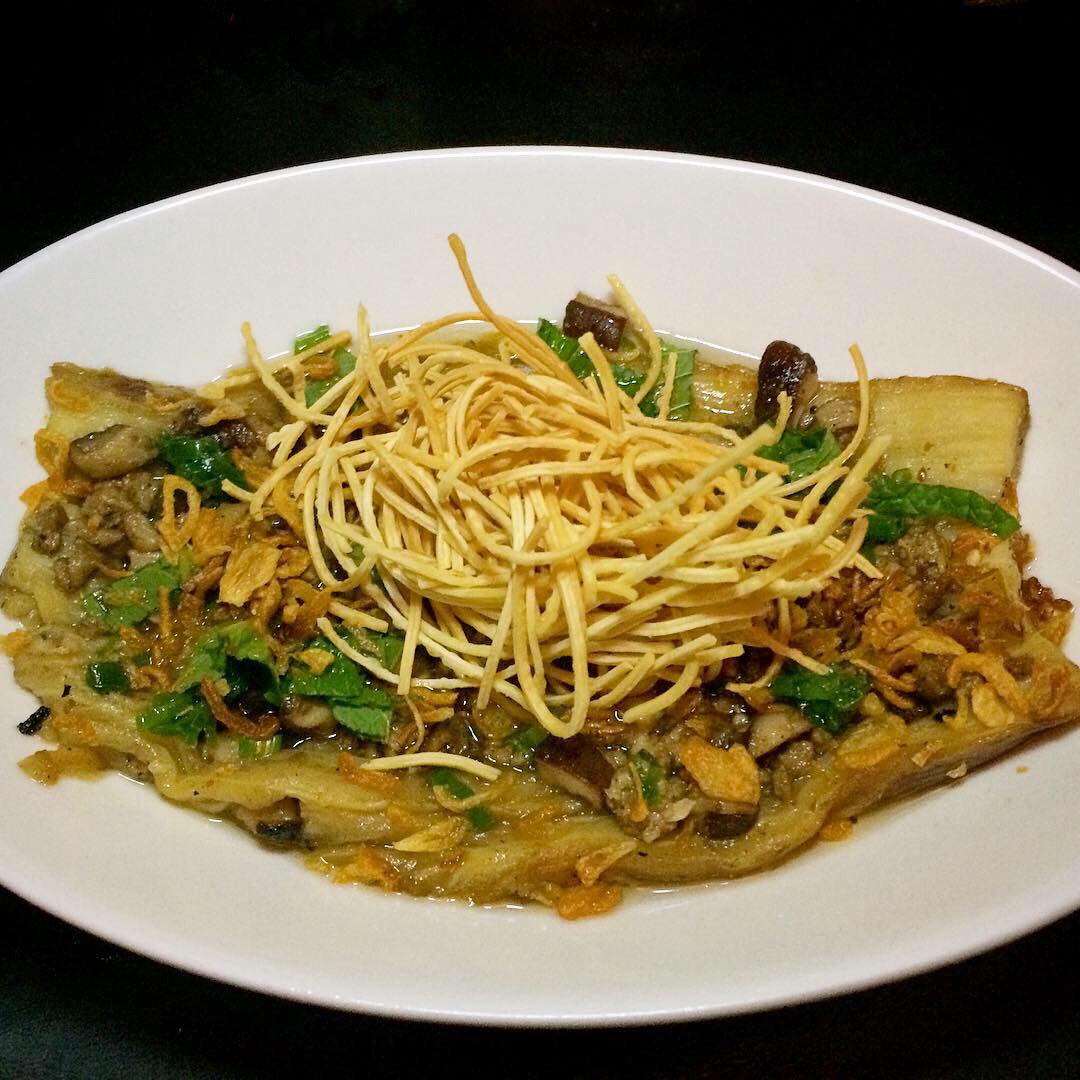 One of the more substantial (i.e., bigger than a bite or two) dishes we selected was Grilled Eggplant with bits of seasoned lamb and mint, served with nuoc cham, a condiment made from nuoc mam (fish sauce), lime juice, and sugar at the minimum, plus a garnish of crispy noodles that provided a welcome contrast. 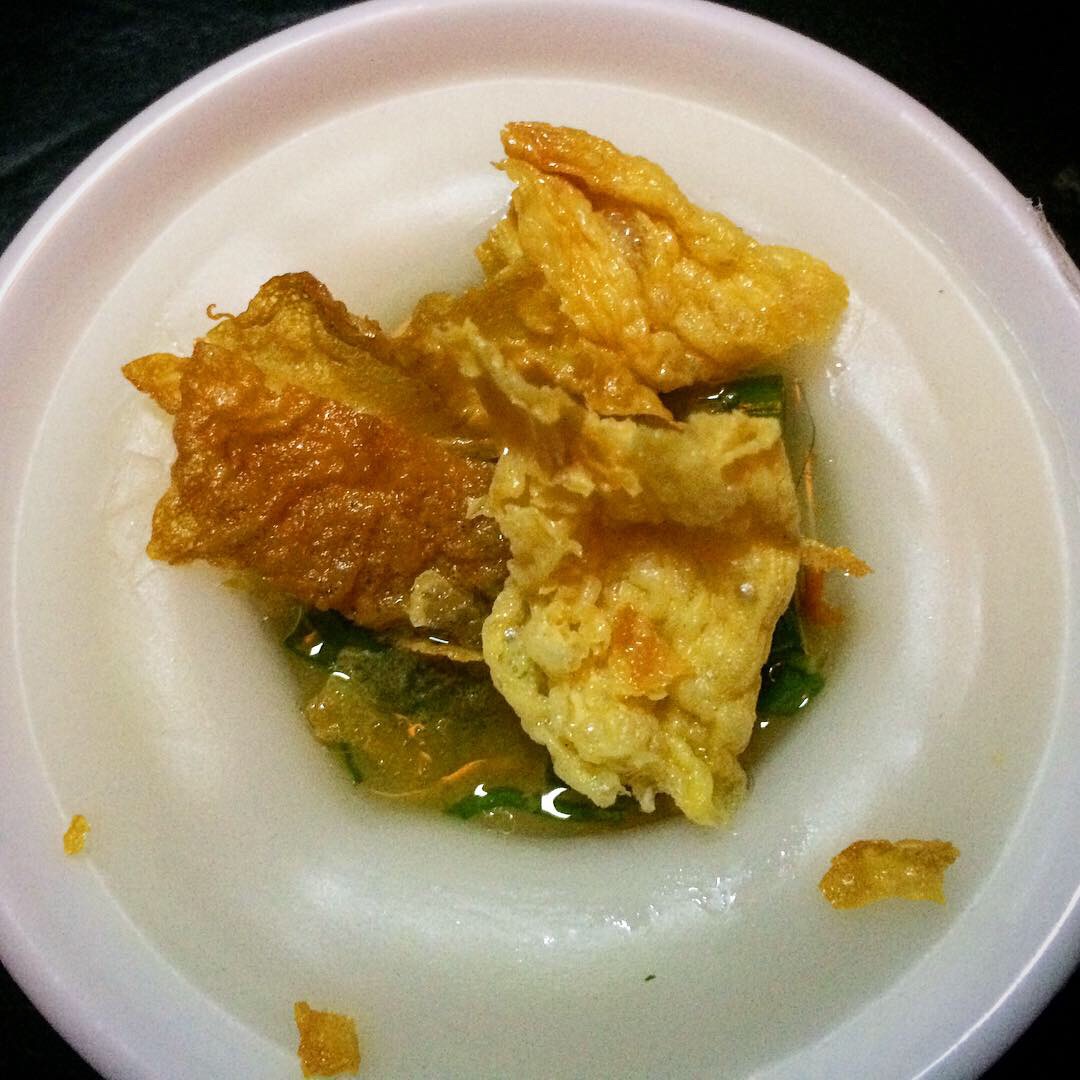 Served in a ceramic cup about 2½ inches in diameter, these Banh Beo are steamed savory rice cakes with minced shrimp pointed up by a hit of scallion oil and garnished with crispy bits of fried pork skin.

Van Đa is located at 234 East 4th St in Manhattan. 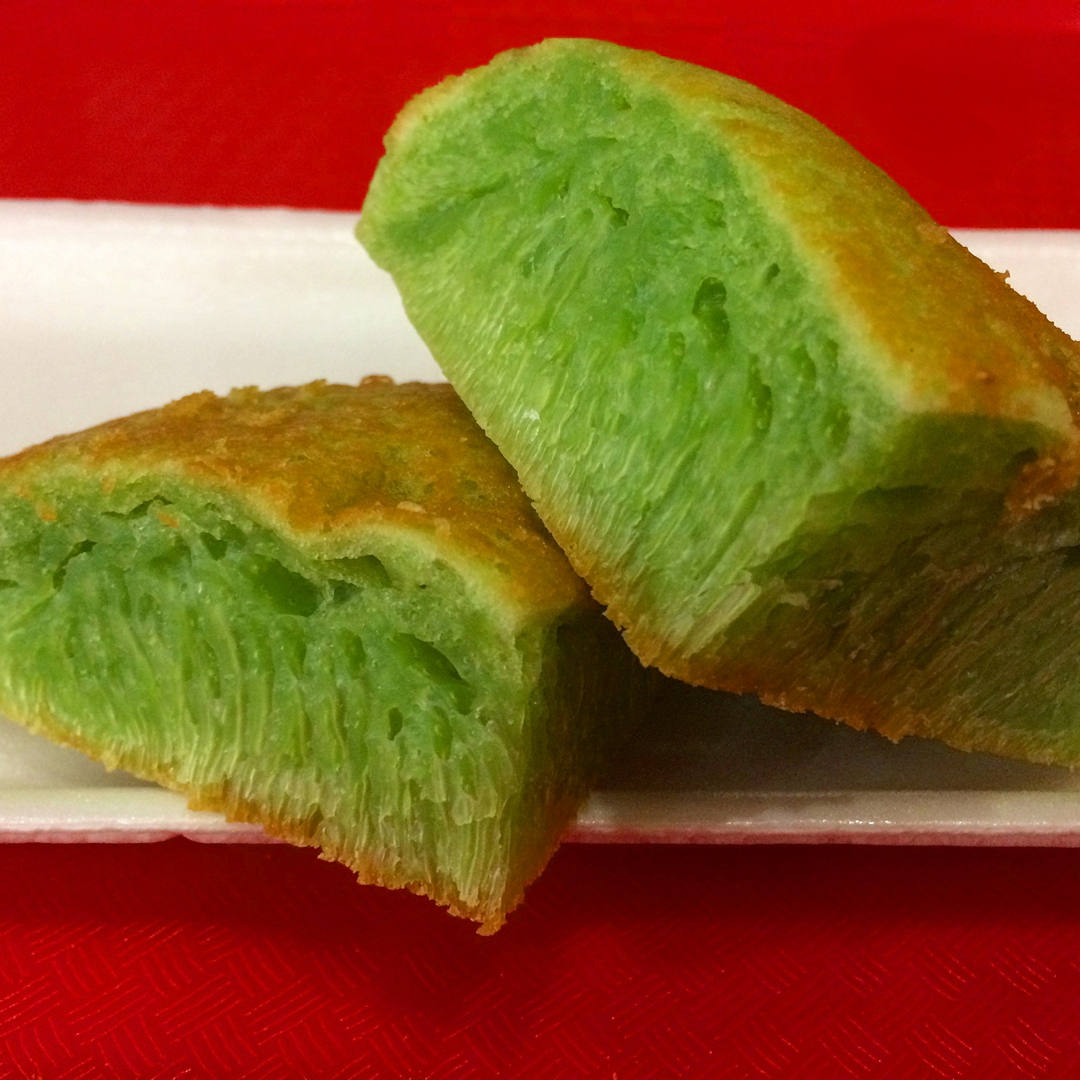 In addition to the assortment of bánh mì you’d expect, Paris Sandwiches at 213 Grand St in Manhattan’s Chinatown sells a modest selection of components for DIY construction so you can roll your own, as it were, including freshly made baguettes, pickled daikon-carrot salad, and a few Vietnamese processed meats. They also carry an assortment of grab-n-go items such as spring rolls, desserts and the like, and baked goods like this Vietnamese Pandan Cake, Bánh Bò Nướng, sometimes called Honeycomb Cake. Its characteristic texture is the key to its appeal; very much like Indonesian martabak manis but not confection filled, this light, sweet treat is a little spongy, a little chewy, and sort of like a crumpet that went missing somewhere in Southeast Asia.