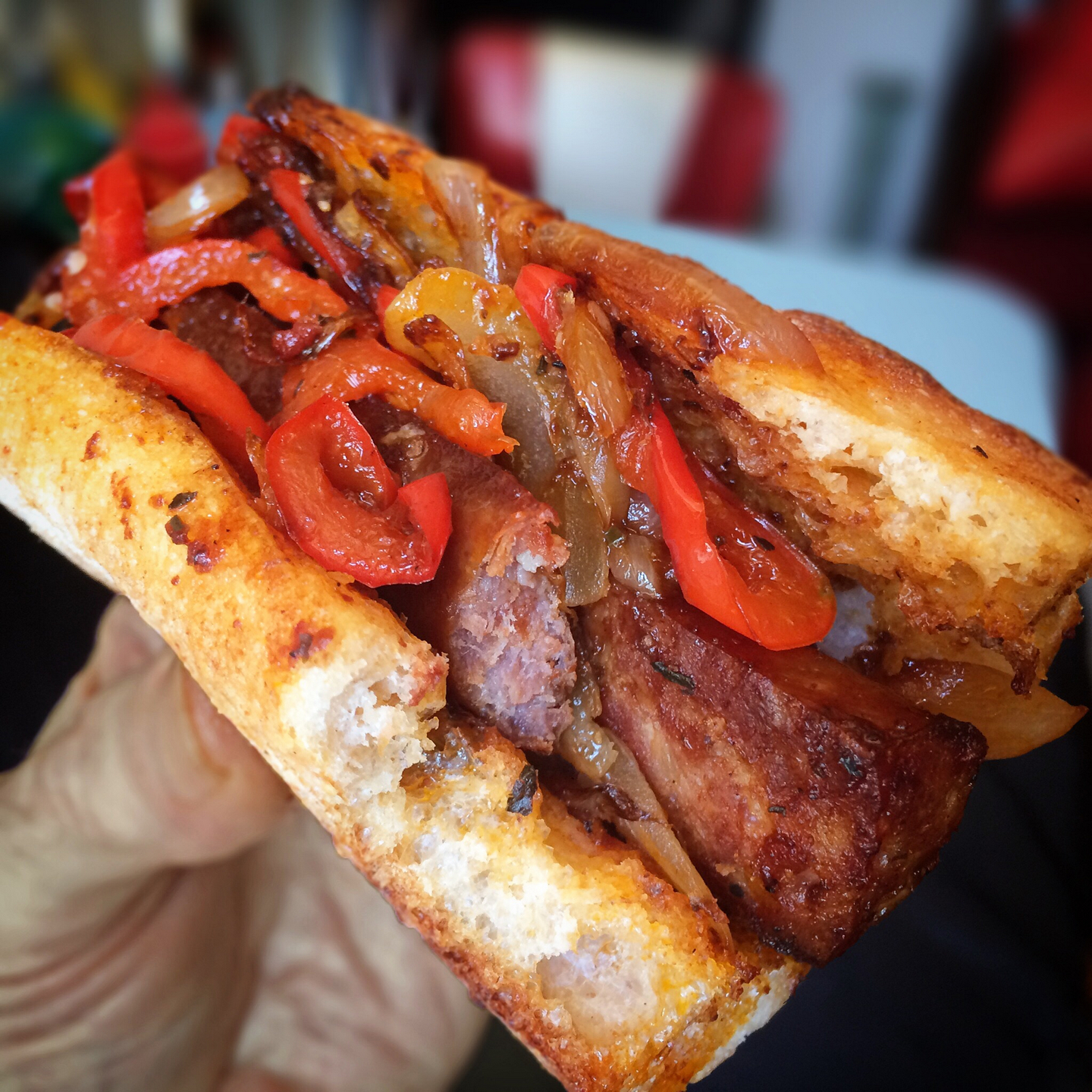 When I was researching adding a Greenpoint, Brooklyn ethnojunket to my repertoire of neighborhood food tours, I bought too many (of course) Eastern European sausages in order to evaluate which would be best (as Melania would have it). There are still a dozen or so in the freezer. Sounds to me like another use-whatever-I-have-on-hand-without-venturing-out-to-buy-more-stuff challenge.

So we’ll start with the most obvious substitution, a sammich endemic to NYC affectionately called Sausage & Peppiz. This one was easy. I already had onions and peppers on hand so I fried them up with some swojska kielbasa adding my not so secret ingredient, fennel seed, which makes everything it comes into contact with taste like Italian sausage. A hit of Parmigiano-Reggiano and bada bing bada boom, Sausage & Peppiz! Mangia!

(All I needed was “the wine with the peaches” as they say at the San Gennaro Festival! 😉)

Serendipity took hold as I threaded my way from the bus stop on an isolated, sleepy, residential street to this year’s Peruvian Festival in Passaic, NJ. (Where would we be without our smart phones and Google Maps? Lost, I guess. But I digress.) As signs of commerce gradually began to emerge, I stumbled upon Piast Meats & Provisions at 1 Passaic Street in Garfield. One of a family-owned mini-chain of three stores, the atmosphere was old world Polish charm (in other words, the aroma of smoked pork and garlic permeated the air); storemade kielbasa, cold cuts, pierogi, and baked goods along with Polish specialty foods tempted me to purchase more than I should have since I’d be schlepping those treasures around all day. It was worth every achy muscle. 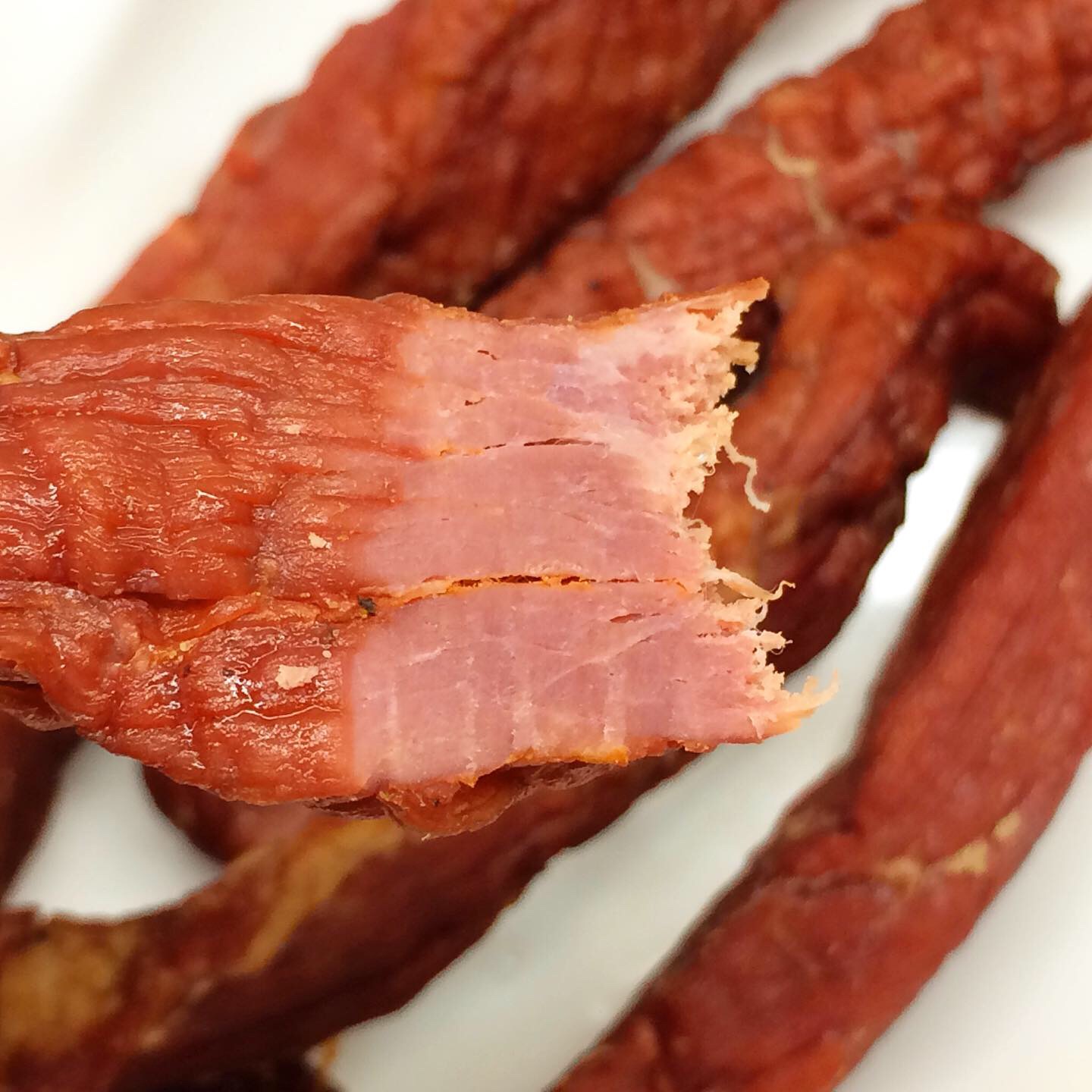 Among many other items I bought, these two were particularly intriguing and utterly delicious. This Przysmak (delicacy) Piwny (relating to beer), translated as “beef jerky”, was incredible: soft, spicy, dried beef but not dry beef and not sausage. Sometimes “beef jerky” should be translated as shoe leather, but not this succulent stuff. On closer inspection it looks like marinated flank steak sliced into ½–¾ inch wide strips. Outstanding. 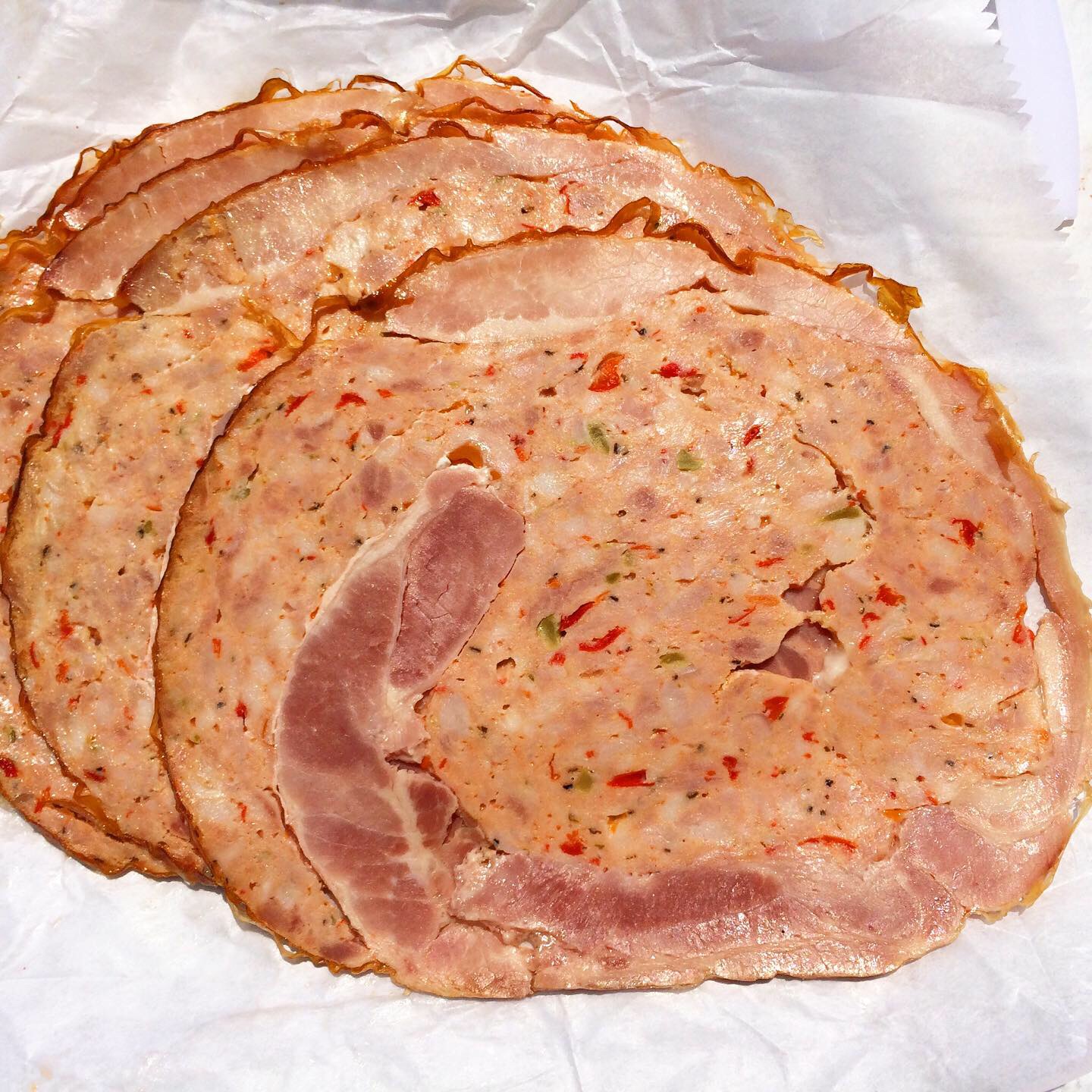 Another sign identified “pork meatloaf”, more of a cold cut really, that looked promising, but right next to it was the same item rolled together in porky matrimony with bacon, Boczek Faszerowany, translated as “stuffed bacon”. Indeed. So it’s sort of pork stuffed pork. Nothing succeeds like excess. 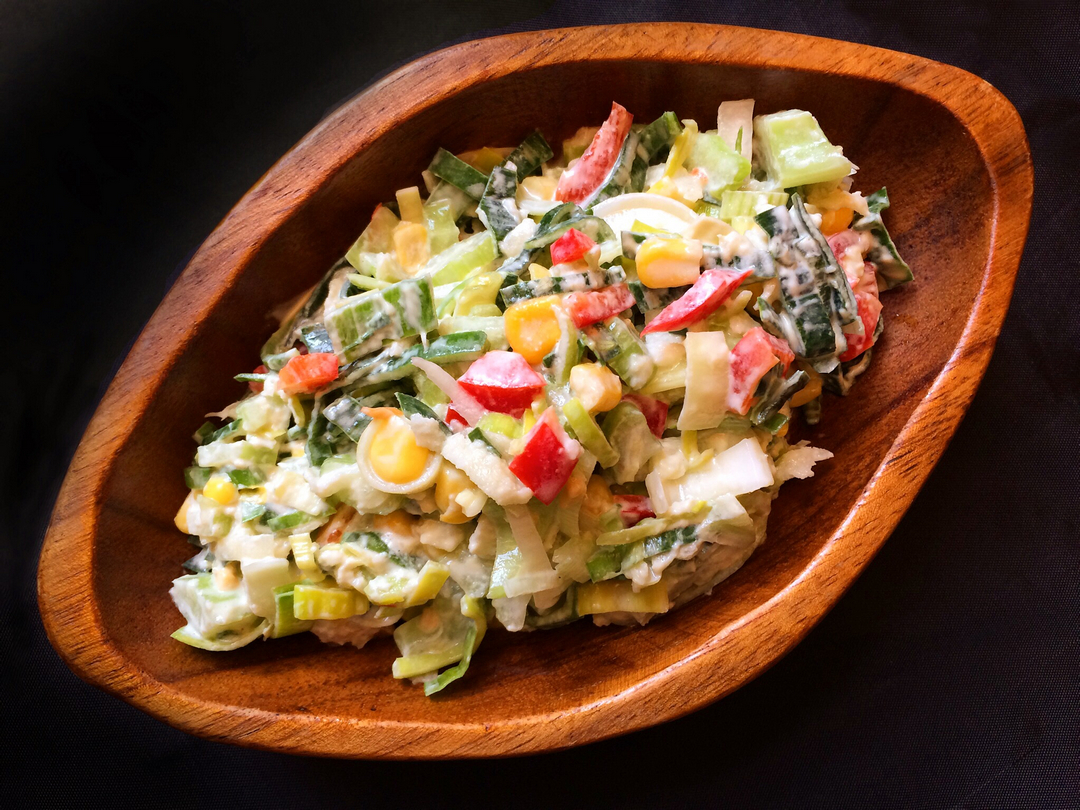 I’m still contemplating whether I should add a new neighborhood ethnic food tour to my roster of ethnojunkets, this time through Greenpoint, Brooklyn with a focus on Polish cuisine.

I suspect some folks think that Polish food is rather one note – although a good note to be sure – opining that kielbasa and pierogies can only take you so far. But there’s more to the cuisine than you might realize. Take this bracing Salatka z Porem i Celerem (Leek & Celery Salad). You don’t usually think of leeks in the starring role of a cold salad and their snappy presence here easily serves to awaken a jaded palate. Adds a further touch of excitement to that Kielbasa Wiejska with a dollop of zingy horseradish cream we’ll be sampling along the way.

Curious to learn more about this hearty cuisine? Any Polish food fans out there? Weigh in please! (Poor choice of words, perhaps. 😉) 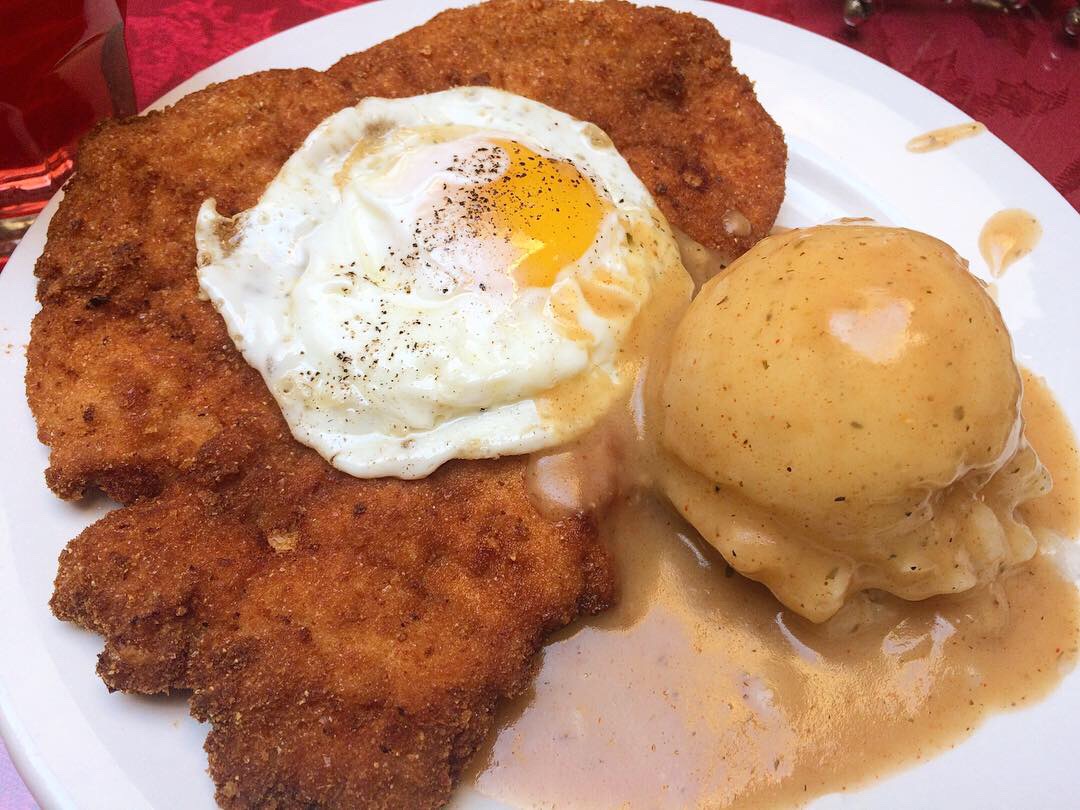 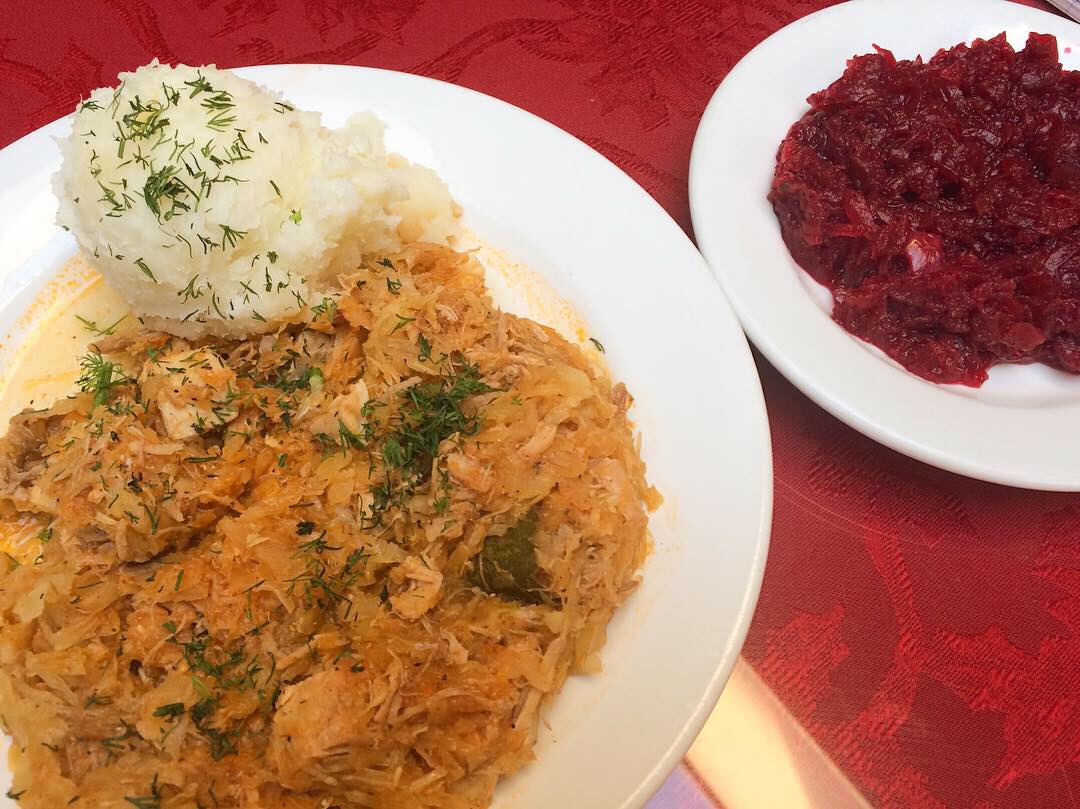 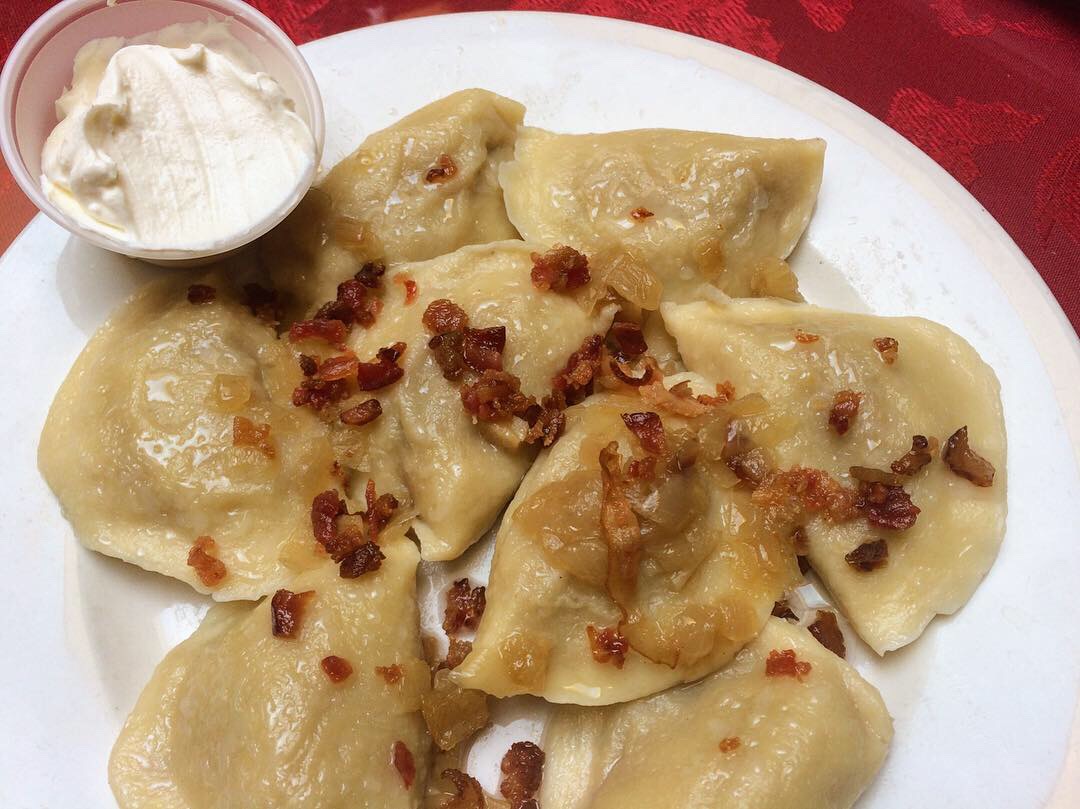 Ever since my Instagram friend @gustasian suggested it, I’ve been contemplating adding a new ethnojunket to my roster. The Greenpoint corner of Brooklyn boasts some hearty and delicious Polish provisions, not to mention more varieties of smoked and cured meats than you can shake a kielbasa at. To reconnoiter the area, we convened at the PSC Cafeteria adjoining the Polish & Slavic Center at 177 Kent Street where home-style comfort food is the order of the day.

[1] This is Kotlet Górski (Mountain Cutlet) a hefty pounded, breaded, and pan fried pork schnitzel topped with a runny egg and kept company by a scoop of gravy swathed mashed potatoes.

[2] Bigos (Hunter’s Stew) a Polish classic incorporating sauerkraut and sometimes fresh cabbage plus bits of whatever meat the aforementioned hunter bagged that morning. These days, it’s almost always pork, often in several manifestations like chunks of fresh meat and sausage, Poland’s answer to Alsatian choucroute garnie. Or perhaps it’s the other way around. Salatka z Burakow (Polish Beet Salad) on the side.

[3] And of course, an order of pierogies was essential: a dumpling by any other name would still spell a treat. Bits of bacon and sautéed onion adorned our Pierogi z Kapusta (cabbage) which we ordered because I like saying “kapusta”. Try it. Sour cream on the side.

Lots more good eats in the neighborhood. What do you think? Should I offer a food tour there?

Not much to look at, I thought, peering through the thick plastic package. Still, it beckoned to me as I navigated the narrow aisle that bisects Polam International Market, one of the bright spots for Polish food in Greenpoint. Seems like an oxymoron: I think of bacon as having ribbons of fat interspersed with lean (the Jack Sprat recipe for marital harmony) and pâté as a paste, coarse or fine, but easily spreadable. I couldn’t be certain of course, but this looked like little chunks of fried bacon suspended in lard. 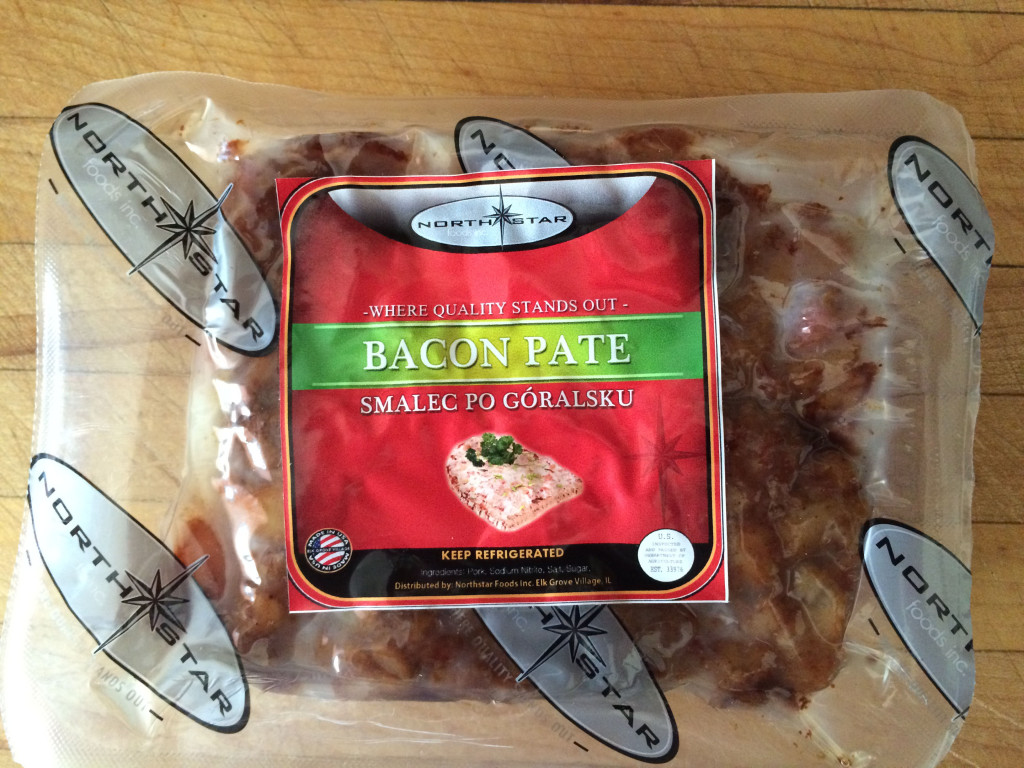 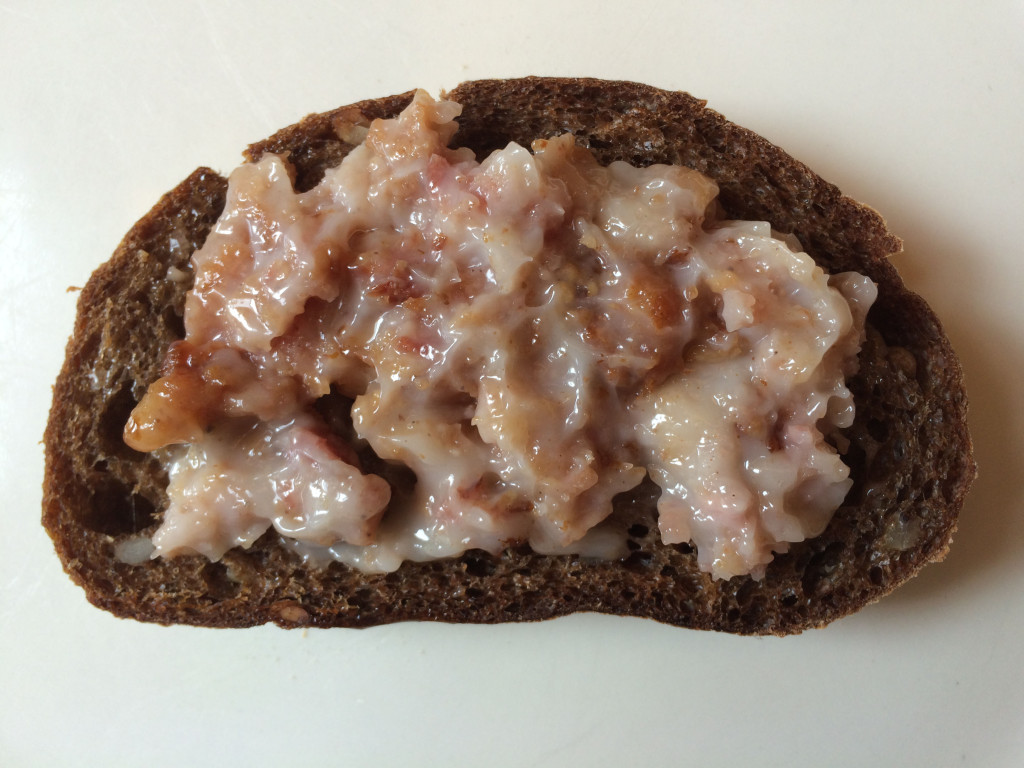 At home, I poured it into a bowl to get a better look.

It still looked like little chunks of fried bacon suspended in lard.

Because that’s precisely what it was. So I went online to learn more about what to do with it: Smalec po Góralsku translates as Mountaineers’ Lard. “Spreadable bacon goodness!” proclaimed the description. “Traditional simple peasant spread typically used as a substitute for butter – put it on the dark bread, add some salt and you will enjoy the Polish mountain village specialty.” Okay, I’m game. For starters, I had to get past the fact that I was about to wrap my lips around glorified lard supported only by a piece of excellent pumpernickel. (I had long since given up on trying to figure out an explanation for the “pâté” part.) I took a bite. I understood where it wanted to go, but its charms were eluding me. I felt that it had potential however. What could I do with it to make it delicious enough to write about? And then I remembered Zoltán.

Zoltán was an affable fellow of Hungarian descent who lived in the country. (When you’re a New Yorker, anywhere on the far side of a bridge leading out of the city is “the country”.) I hadn’t thought about him in years. His claim to fame was that every summer, he’d get a fire going in a little pit in his backyard and make Szalonna. He’d impale a hunk of Hungarian back bacon on a stick and hold it over the flames and just as the fat began to sizzle and render, he’d pull it out of the fire and hold it over a piece of fresh bread until the drippings dwindled. Then back over the flames it went for another round – repeatedly until the bread was saturated. Sometimes it was topped with onion, cucumber, or bell pepper. Neighborhood kids would come running to his yard as the heavenly, porky aroma filled the air. The Good Humor man had nothing on Zoltán.

So taking a tip from those ancient sense memories, I concocted a plan. Caramelize thinly sliced onions very slowly in the bacon pâté. While they grow sweet, slice an heirloom tomato and oven toast a slice of pumpernickel. When the onions are done, drench the toasted pumpernickel in the rendered lard, add the onions and bacon pieces, top with a slice of tomato, and sprinkle with wild mushroom sea salt. 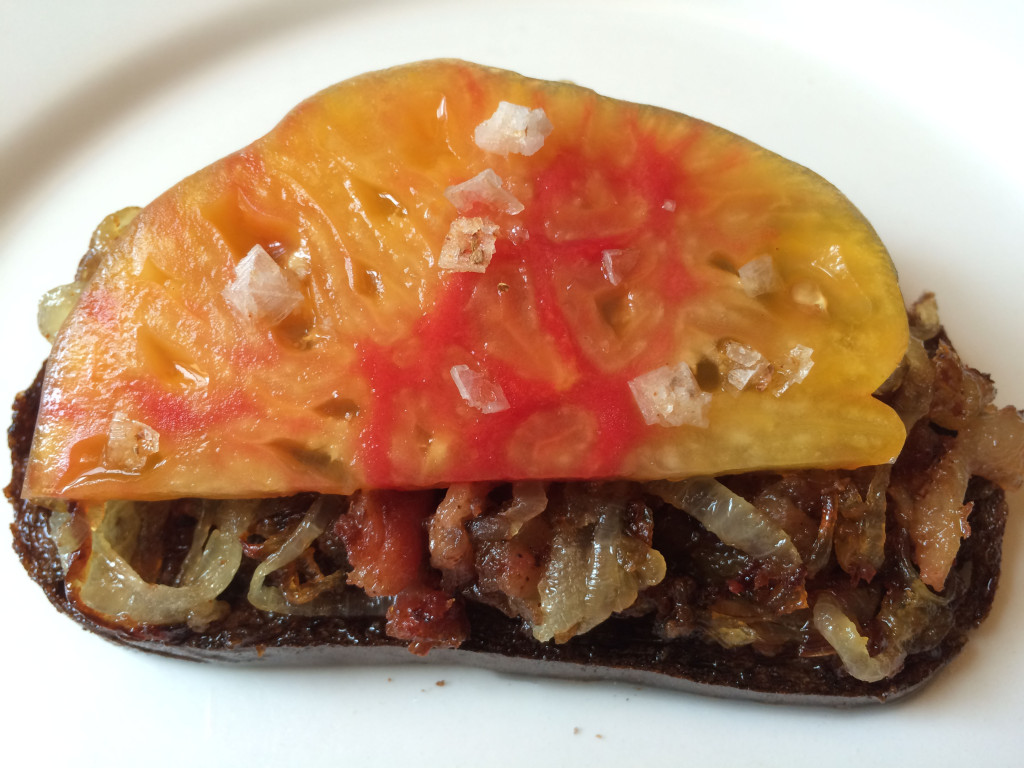 Of course, I had to go through several of these to make sure they were as wonderful as I thought they were on the first bite. Ah, such sacrifice.