Just a reminder that the Queens International Night Market is still going strong in its 2019 Fall Season, and tomorrow brings another chance to visit! You’ll savor delicious international food and experience incredible musical performances in an exciting night market atmosphere; admission is free. 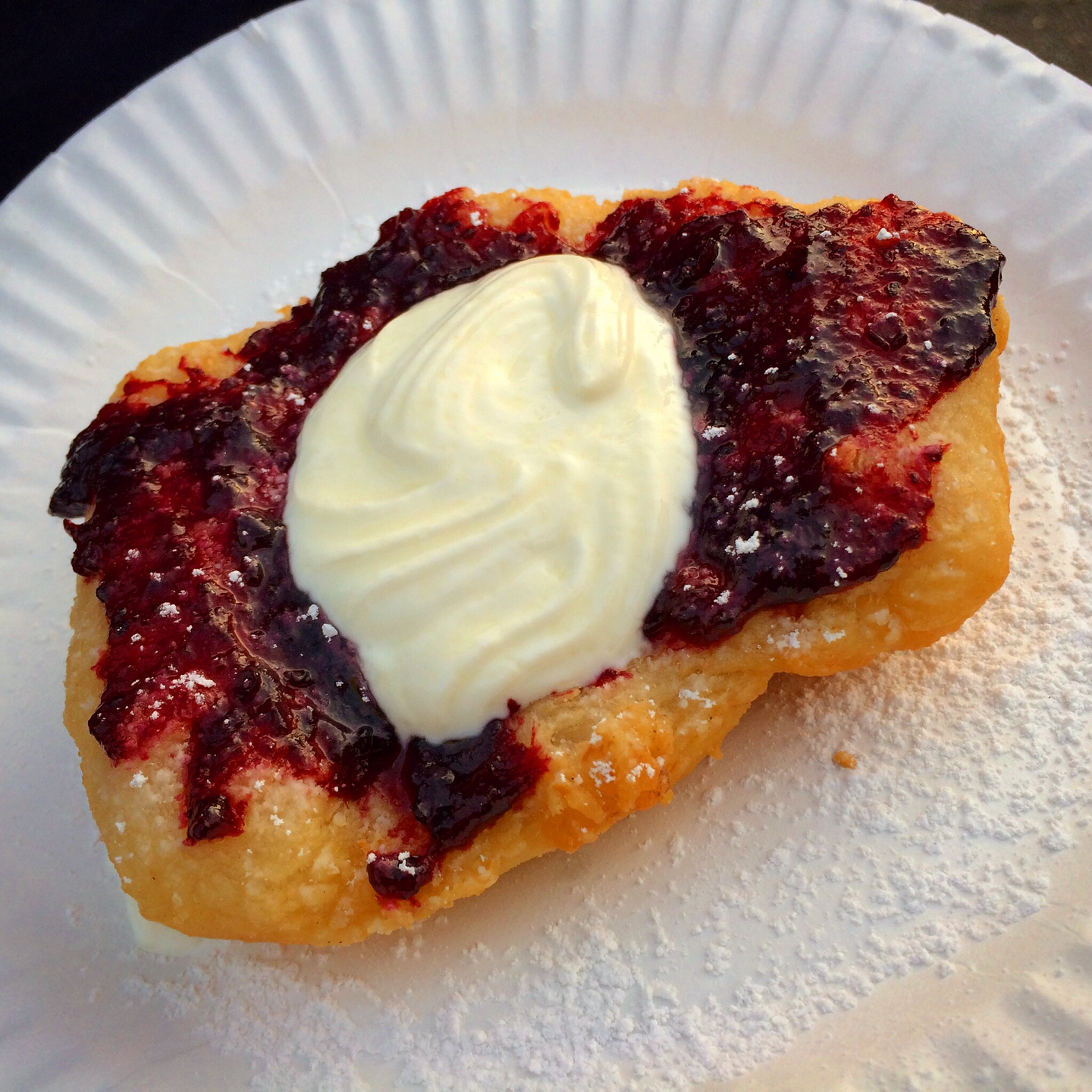 Notes from my last visit: The banner over the vendor’s booth proclaimed “Czech Style Langosh” but if you take one etymological step back, you’ll find langoš, the Czech rendition of the (one more step) Hungarian snack pastry lángos. However you spell it, they’re a soft, puffy, almost doughnutty flatbread, accommodating any number of toppings from savory to sweet, and they’re delicious.

Savory toppings when I visited their booth included classic (garlic sauce & cheese) and bacon (classic plus bacon); sweet versions comprised a sugar & cinnamon base with a number of syrups, as well as the beauty you see here, black currant jam with sour cream.

To see when they’ll (hopefully) be back, check out QNM’s vendors and performers list at www.queensnightmarket.com. Lots more good eats in the meantime, so head out to the Queens Night Market outside the New York Hall of Science in Flushing Meadows Corona Park. You’ll find them every Saturday from 5pm until midnight through October 26.

See you there soon! 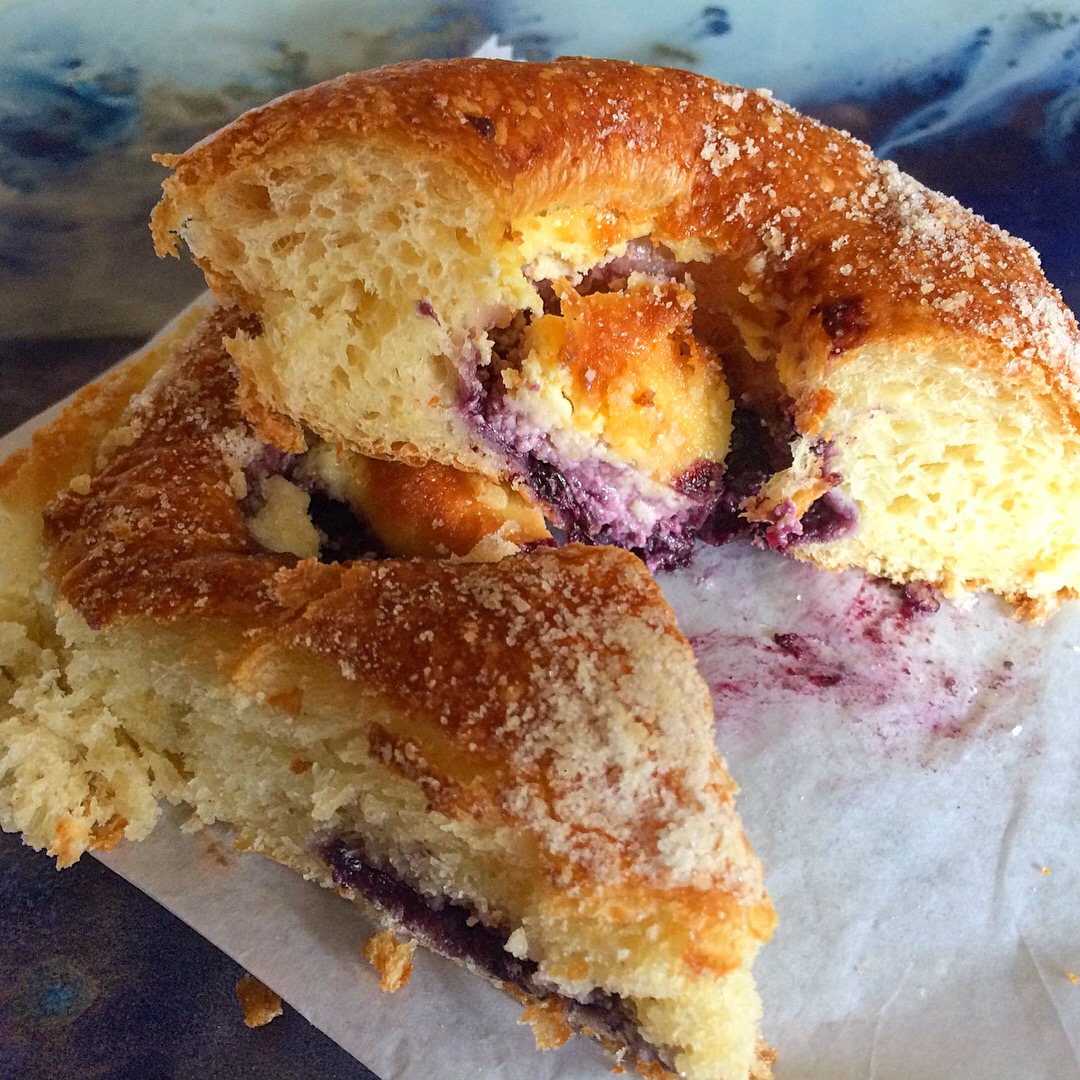 You can track down the sweet and savory Czech pastries known as kolaches as well as select coffee and tea in the namesake bakery, Brooklyn Kolache Co. at 520 DeKalb Ave. These folks have ported small-batch Texas style kolaches to Bedford-Stuyvesant, “Deep in the Heart of Brooklyn”. Texas style? Yes, it’s a thing – and they’ve taken care to keep everything as sustainable, locally sourced, and organic as possible. This puffy blueberry cheese kolache made a righteous quick breakfast.

Second photo shows a peek inside.

Some years ago I wandered into Slovak-Czech Varieties expecting only that I’d find a broad enough spectrum of Eastern European treats to pique my ethnojunkie palate. I bought a bit of this and that and, innocently enough, a bar of Studentská Pečet milk chocolate with nuts and sour cherries. Little did I realize at the time that I had just purchased what was to become a persistent craving and the stuff of which daydreams are made.

Any attempt to describe that flavor combination would pale into insignificance next to the reality of this delicious sweet; suffice it to say that my chocolatey dream fostered a number of subsequent visits. Unfortunately, my timing was terrible, and each time I returned, they were sold out. So recently, determined to consummate a rendezvous with my fantasy once again, I called the establishment repeatedly until I was certain that it was back in stock. Needless to say, I made a beeline to the shop to pick some up. (They also feature chocolates filled with rum, dark chocolate with raisins and nuts, and unusual little tubes of sweetened condensed milk as well as innumerable other sweets.) 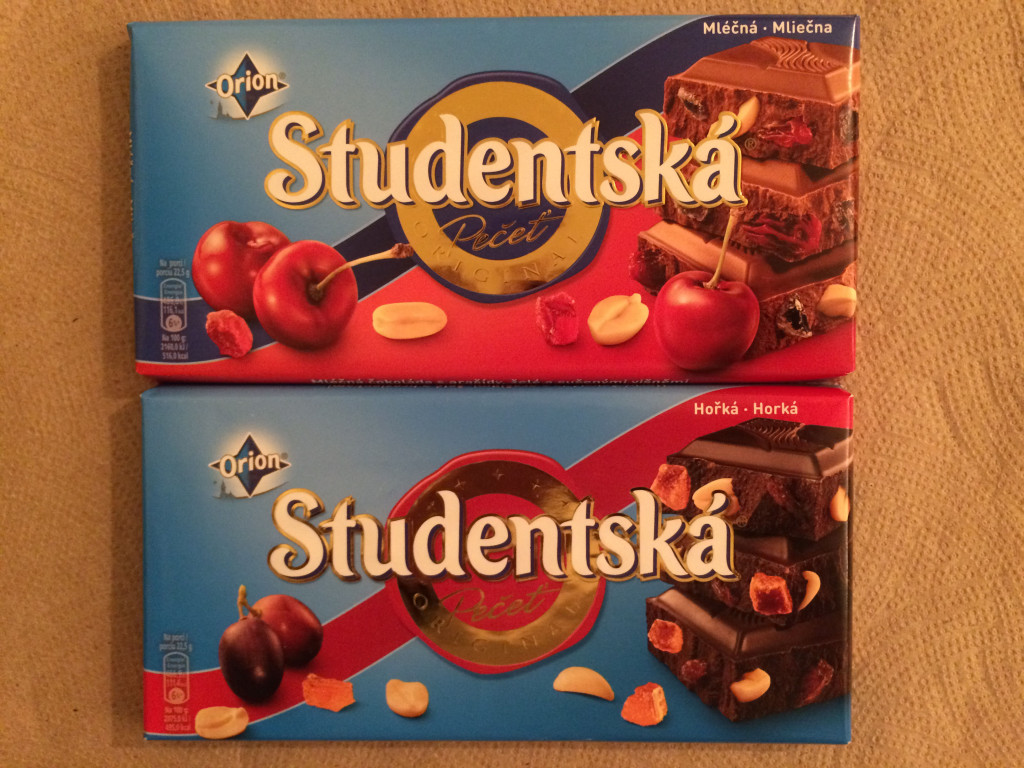 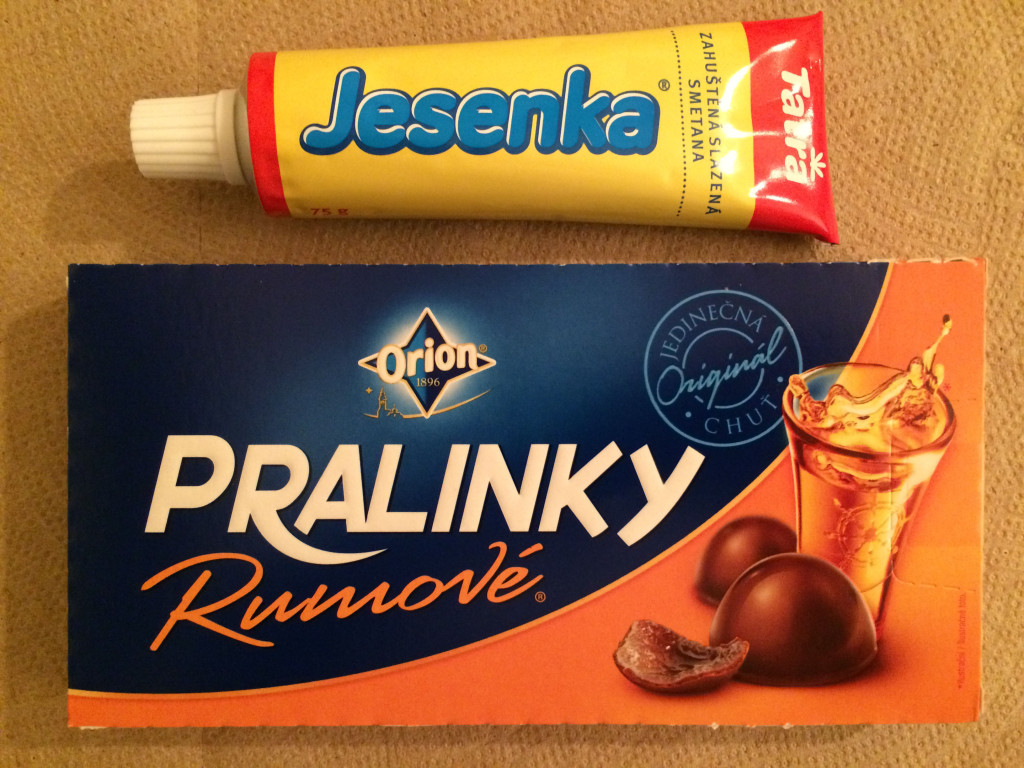 Settling back down to earth, my frenzied jones now satisfied, I realized that there was much more to Slovak-Czech Varieties than their formidable selection of candies. Their stock hails from the Czech Republic, the Slovak Republic, Hungary, Germany, Croatia and Poland. As a matter of fact, you could put together a pretty tasty meal just from their assortment of artisanal sausages (such as a delicious Hungarian dried sausage called csabai, available in sweet or spicy variations), smoked cheese, mustards and the like. You’ll also find unusual sodas in flavors like pampeliška (dandelion), gaštan (chestnut), and mateřídouška (thyme). A wide assortment of packaged mixes, both savory and sweet, rounds out the selection of merchandise. And they’ve just recently set out a selection of Christmas specialties including chocolate Christmas tree ornaments and seasonal cookies and treats. 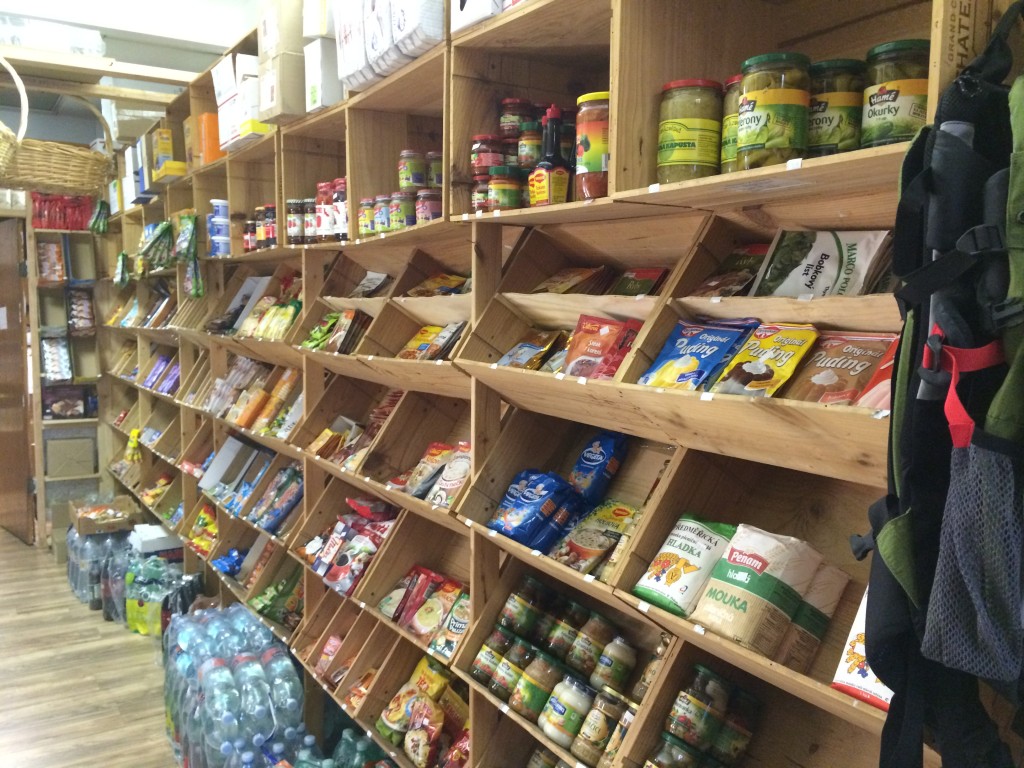 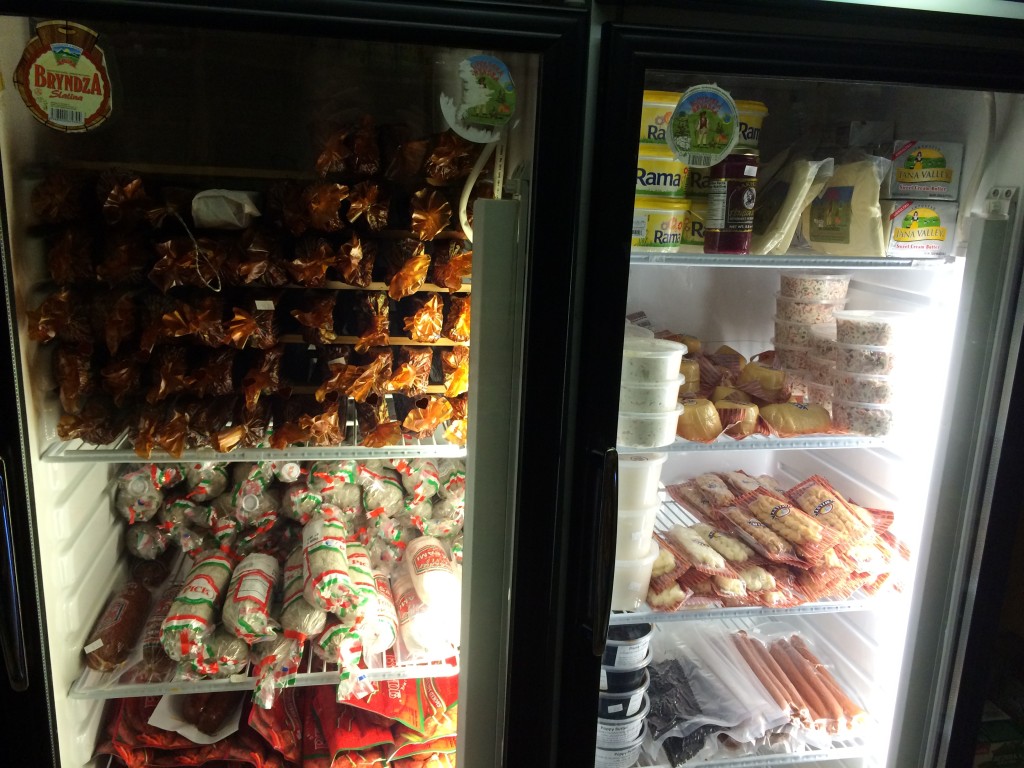 Co-owners Milan and Jarka are more than helpful, answering questions, offering recipes, and translating the cryptic labeling. But beyond their eagerness to please lies another interesting story. As you enter the store, you’ll see a set of shelves crowded with adorable hand-crafted wooden figurines, from endearing animals to charming little pull-toys. Milan told me that making these toys is his hobby and he’s been doing it for about 40 years, having started in his homeland in his late teens. “It’s what we did to pass the time on winter nights; we didn’t have television or computers.” He fashions the toys from wood that boxes of wine were delivered in, laminating layers and honoring the “imperfections” (like knots or the grain) “just like Tiffany did with his glass,” he explained. 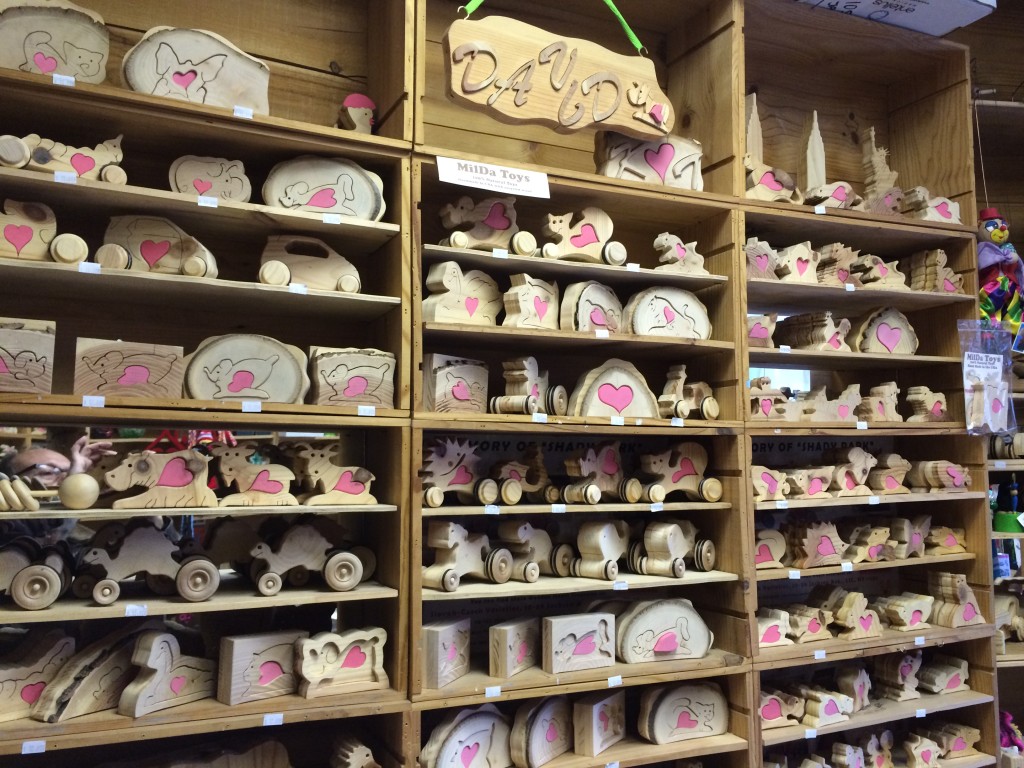 Seems to me that one of those toys plus some Christmas goodies sure would make a kid happy this time of year. Not to mention a bar of Studentská Pečet milk chocolate with nuts and sour cherries for the shopper!