The annual August celebration of Suriname Day at Roy Wilkins Park in St. Albans, Queens seemed remote – certainly On Beyond Z-Train, not to mention the E and the J – but I had never experienced Surinamese food and the perfect circumstances through which I could explore it prevailed.

Occupying a tiny corner of northeast South America, Suriname was settled by the British but taken over by the Dutch (it’s the official language) in the 17th century. Demographically diverse, its cuisine promised influences from indigenous peoples, East Indians, West Africans, Javanese, Chinese, Brazilians, Portuguese, and Jews, not to mention the Dutch; and since for all intents and purposes it is culturally Caribbean, I anticipated a serious geographical culinary contribution as well. I was not disappointed.

In addition to numerous rice dishes, some of the fare I sampled (see below) included salt fish and spicy chicken gizzard and liver, bakabana (fried plantain with spicy peanut sauce), trie and telo (anchovies and cassava/yuca)… 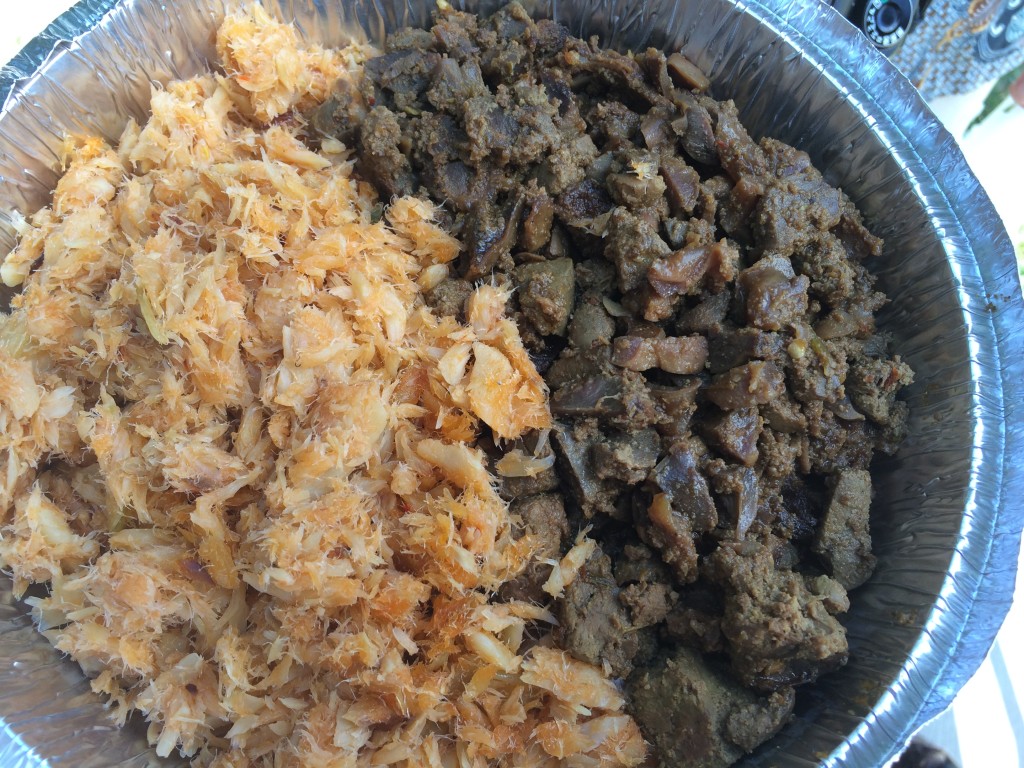 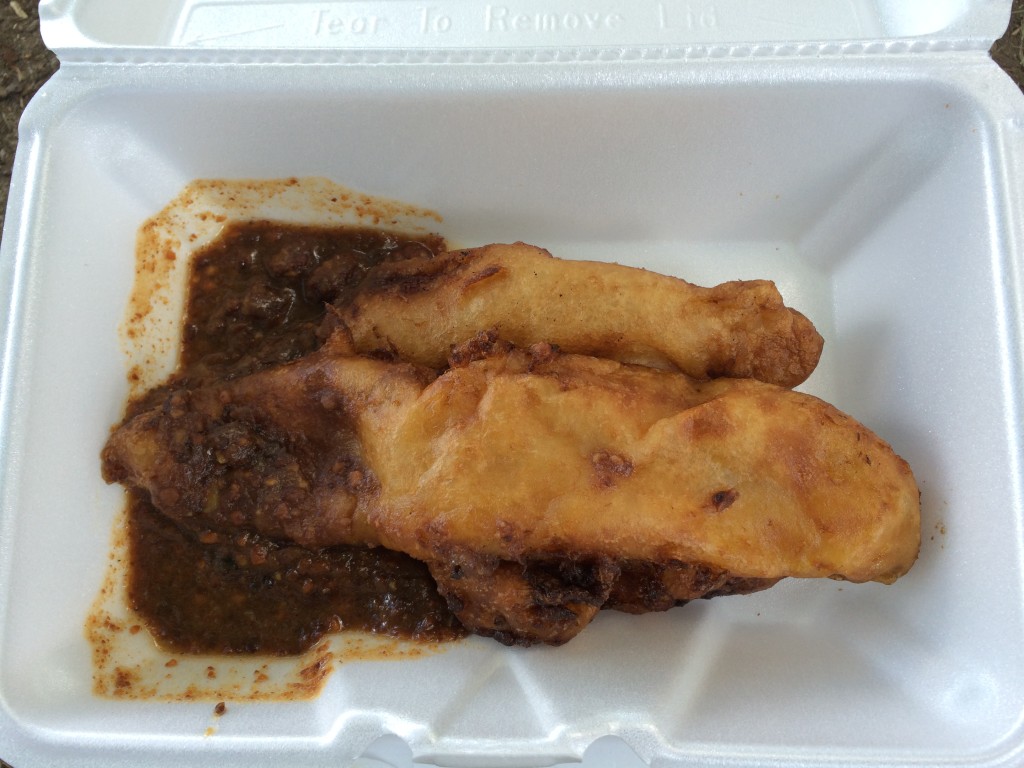 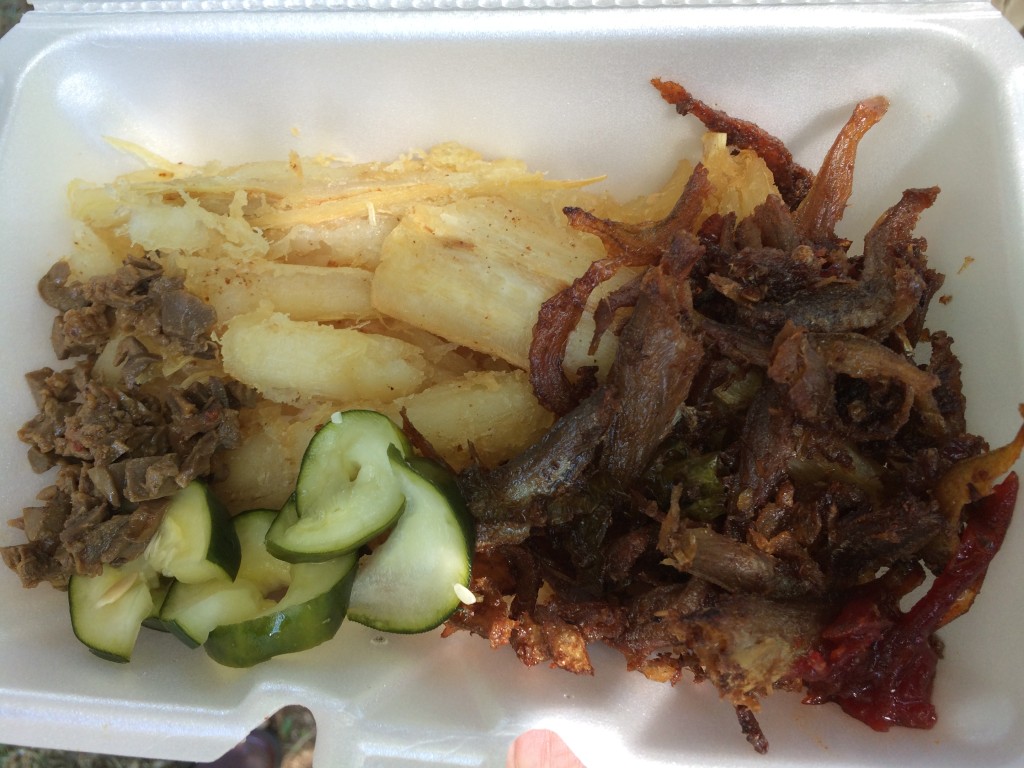 Pom? I was familiar with the others in one incarnation or another (although certainly cloaked under unfamiliar aliases here) but pom? Hardly obscure at this venue, it seemed that every table was offering their version of the dish. 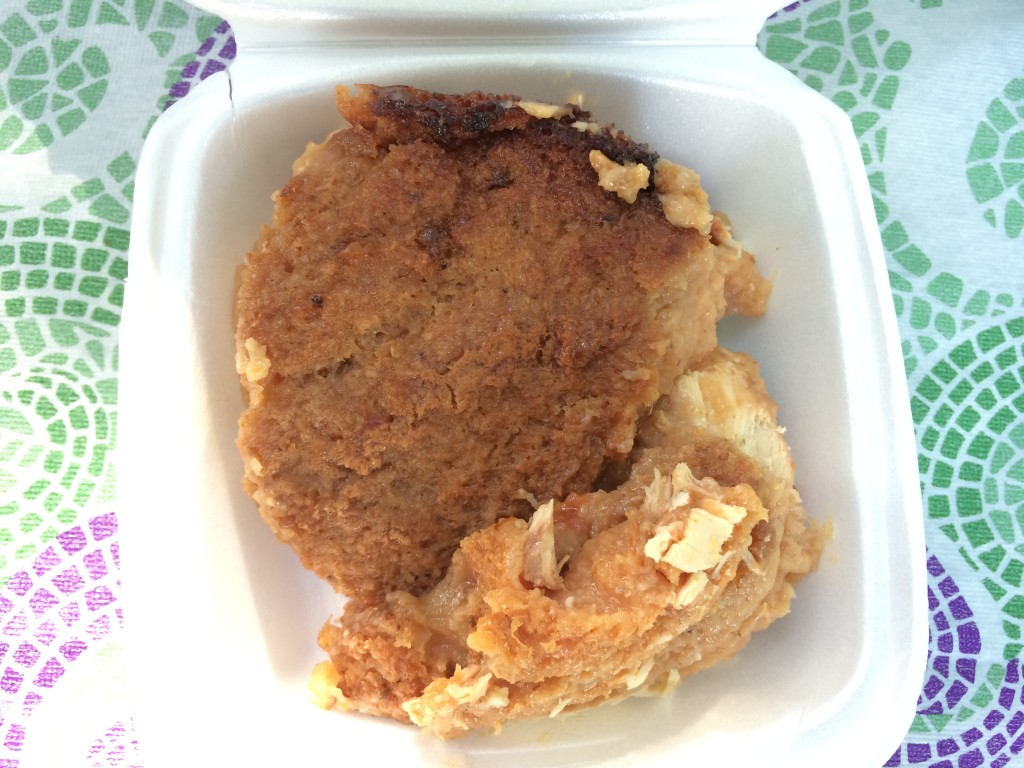 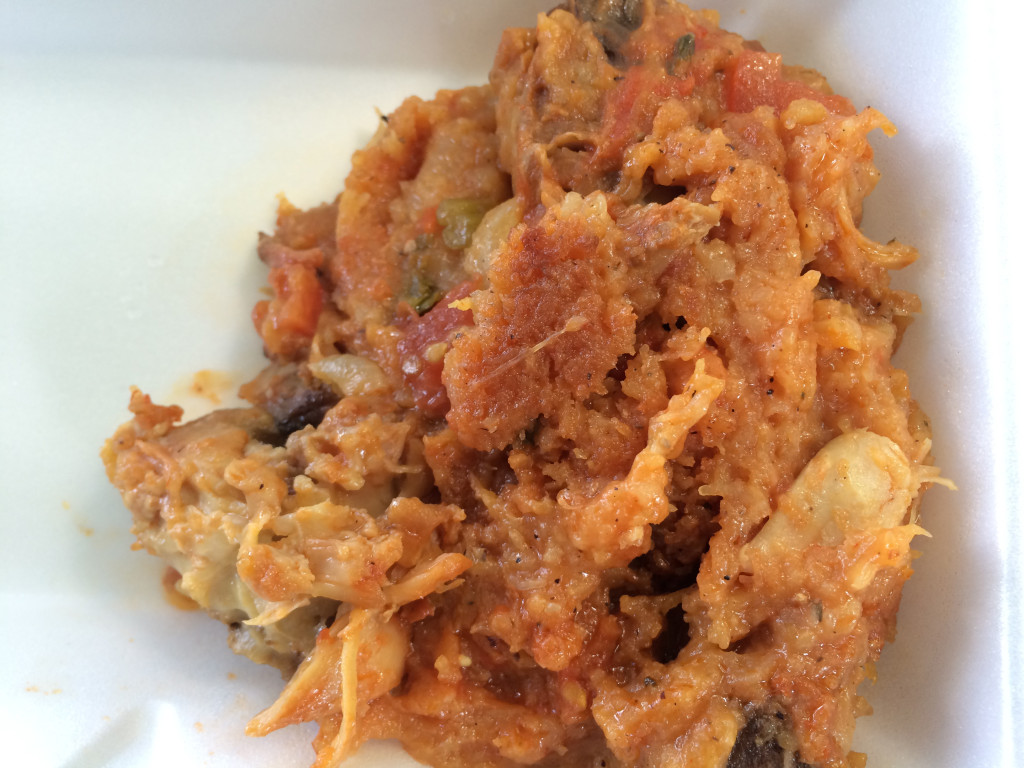 Subsequent research revealed that pom is a sine qua non of festive occasions in Suriname, as the expression “without pom there is no birthday” makes abundantly clear. Made from grated pomtayer (the tuber/corm of Xanthosoma sagittifolium) plus chicken and citrus juice (often orange) along with onions, tomatoes, and various seasonings, the dish is baked until it’s GBD (golden brown and delicious).

I took my place in line anticipating my first taste of pom. The flavor was sweet, the texture about what you’d expect from a mashed yam as it coddled the flavorful chunks of chicken buried within. It was wonderful. My fellow food adventurer, having disappeared as I was waiting, returned with another version. It was better than the first. This humble dish was etching itself indelibly on my culinary sense memory. I queued up at another booth now, eager to try a third version. A brief eternity later, it was my turn. Pointing at the tray filled with golden brown deliciousness, I gushed, “One please; I love pom!” fairly swooning.

At that point my buddy stepped up behind me and intoned to the woman behind the table, “He means having tasted it for the first time today, he loves it.”

My cover blown, I confessed, “He’s right. But it was love at first sight. Or first taste actually. Can you dig that?” I asked the vendor.

I clutched my styrofoam trays of precious pomish treasure and hurried home to attempt to recreate this wonder. But where would I locate pomtayer? That turned out to be the easy part. Yautía (preferably the red/pink variety), also known as malanga, is the moniker under which I’d find it in this area; one could use taro root in a pinch, but I think that might be straying a bit far from the original. The hard part, it turns out, was unearthing a recipe. Usually bursting with helpful culinary instructions for every dish imaginable (and some not so much), the internet had surprisingly few offerings, each different from the last. The “various seasonings” I referred to above are the key. One used pickles, another rum, yet another called for salt pork; some were Jewish inflected, some Chinese, some Javanese, some Hindu. Like the pom at the festival, I could see that these would all be radically different from each other. Once again, I found myself in my kitchen/lab reverse engineering a recipe relying as much on my taste buds as the web and striving for deliciousness and authenticity. I’m pleased to report that my efforts were rewarded with a dish that met my expectations. As a matter of fact, I was so pleased with it that I’m happy to share it with you.

Leave me a comment, and the recipe is yours.